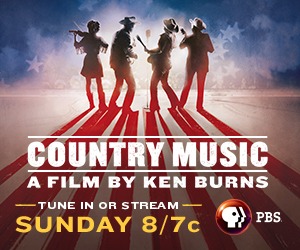 PROGRAMMING NOTE: “Country Music” premieres on PBS stations, including Northwest Public Broadcasting’s KTNW in the Tri-Cities region, on Sunday, Sept. 15 at 8 p.m., or on the PBS Passport here.

The story-song is as country as “three chords and the truth,” to paraphrase one legendary songwriter.

Using song to tell a story is a tradition within country music, where the performers hook their audience with a vivid tale. They can be ballads, silly send-ups or a grand ol’ saga.

In his latest compendium of American culture, filmmaker Ken Burns, along with writer Dayton Duncan, explores the history of “Country Music” in a new 16-hour documentary. Burns said that story-songs are a phenomenon that can be traced back centuries, to long, multi-verse ballads that were handed down from generation to generation. Some songs could have as many as 15 verses to them, he said.

Burns, whose documentary compiles more than 100 interviews and took more than eight years to produce, spoke with the PBS NewsHour about the “distilled poetry” found in story-songs, and one in particular has remained stuck in his head.

How would you describe the story-song to someone? What is that?

The original stuff, centuries ago, were long, multi-verse ballads that you would hand down from generation to generation — might have 10, 12, 15 verses to it. But you think of “Long Black Veil,” which tells the story of a murder and the hanging and the grieving woman visiting the grave. Or “El Paso,” which is a complicated love story, or “Ode to Billie Joe” by Bobbie Gentry, which paints this unbelievably complicated portrait of real stuff that happens to teenagers everywhere, and it is as vivid today when you hear it for the first time, as soulful today as we heard it in the ‘60s when it came out. It’s still as stunning as it could be.

Do you have a particular song stuck in your head after all this?

You know what, I have “I’m So Lonesome I Can Cry.” I have another song by Johnny Cash called “I Still Miss Someone,” which his daughter Rosanne [sang] at his memorial service, and is therefore one of the last moments in the series of our film. And it’s so, so like “I’m so Lonesome I Can Cry,” so direct.

This is great. It’s haiku. It’s distilled poetry, the essence of what human communication can be. Language can be married with great music, and when you hear Johnny or Rosanne Cash sing that, if you [do] not have tears in your eyes then, I suggest you seek professional help.