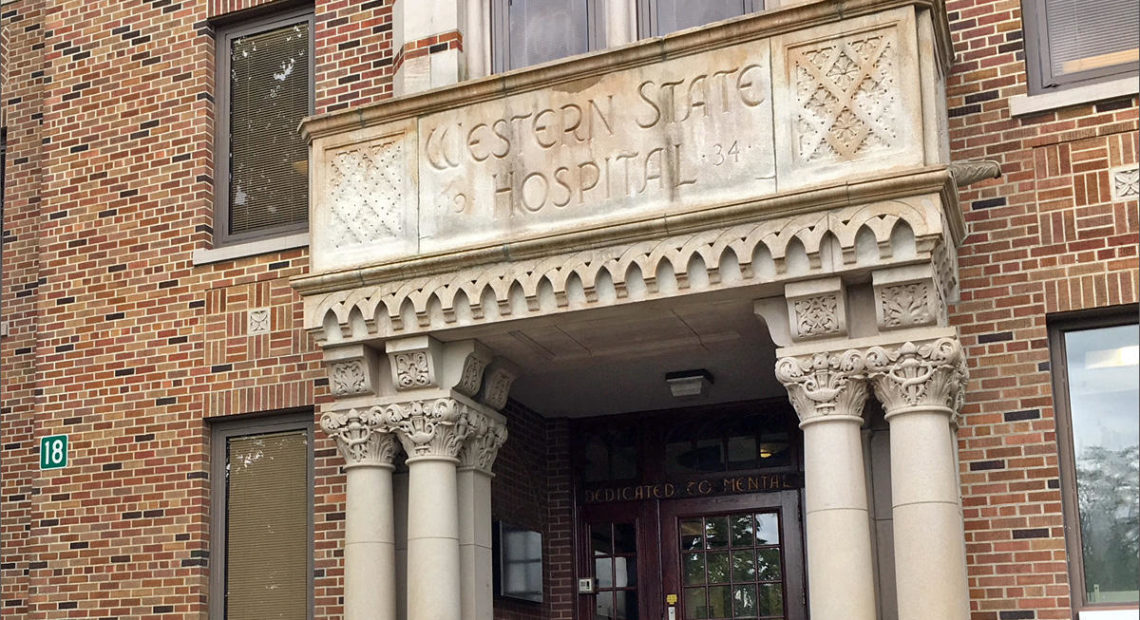 This January, Carolyn Guinotte took her son Alan to the emergency room because he was unable to go to the bathroom. Alan is 30 years old, autistic and mostly non-verbal. But when it was time for Alan to get out of the hospital, Guinotte and her husband said they couldn’t take him back.

“It feels really horrible to say you can’t take your own son back home,” Guinotte said. “But if you can’t provide the care he needs, what’s the point?”

The state didn’t have any options for Alan either. So he remained in the hospital. That decision had a ripple effect that sent Alan spiraling into a crisis, created ongoing stress for his parents, and that, advocates say, reveals an ongoing crisis in developmental disabilities services in Washington. 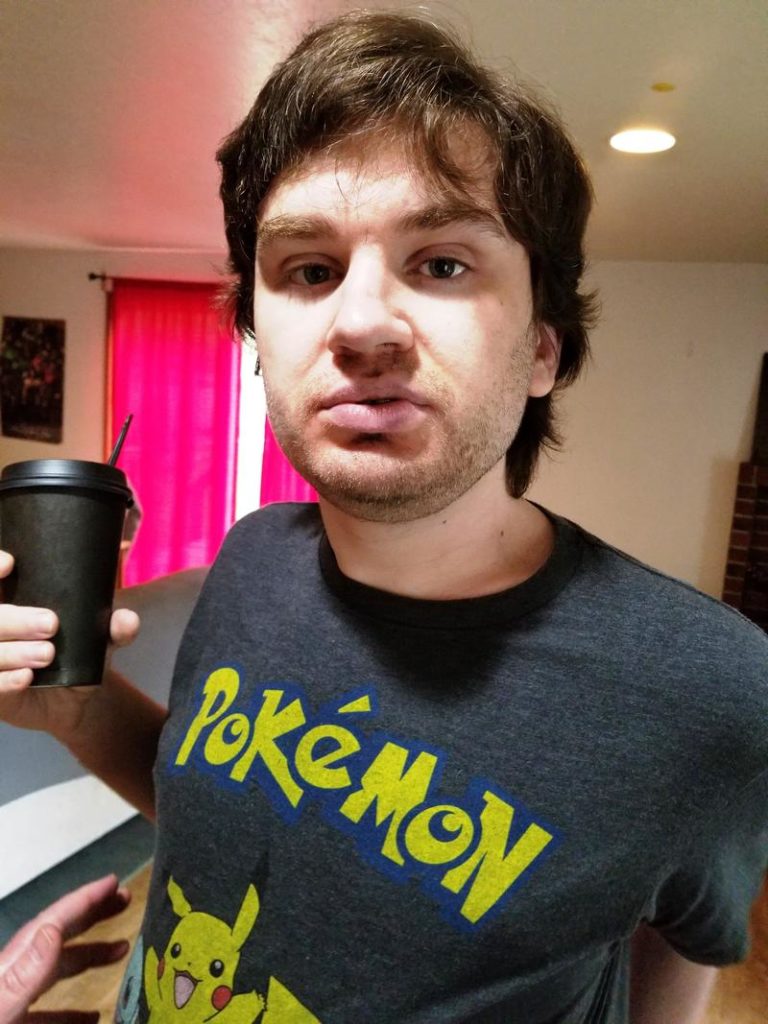 Prior to his hospitalization, Alan Guinotte shared a staffed home with two other developmental disabled men. COURTESY CAROLYN GUINOTTE

Now, eight months later, Alan is a patient in a specialized unit at Western State Hospital, one of the state’s two psychiatric facilities. According to his family, he was recently cleared for discharge back into the community. But because there continues to be a lack of community-based placement options, Alan remains stuck in the hospital.

Alan is being treated in the Habilitative Mental Health Treatment Program (HMH) at Western State. It’s a 30-bed unit designed for people with developmental disabilities and behavioral health issues. The unit was created in the aftermath of a lawsuit filed in the late-1990s on behalf of developmentally disabled psychiatric patients who lawyers said faced abuse and neglect in the state hospitals.

Eastern State Hospital in Spokane also has an HMH unit.

Not only are these patients being hospitalized unnecessarily, they’re taking up beds needed by other patients. As of Sept. 6, DSHS said there were 19 patients waiting for an HMH bed at Western and Eastern State Hospitals.

“There’s definitely a demand for those beds and we pay close attention to that,” said Sean Murphy, the DSHS assistant secretary in charge of behavioral health.

Prior to his visit to the emergency room in January, the Guinottes had been trying to care for Alan at their Olympia-area home. It was a relatively new arrangement. Previously, Alan shared a house with two other Developmental Disabilities Administration (DDA) clients. The house was staffed around-the-clock.

But in October 2018, the agency providing care to Alan notified his parents it was dropping him as a client, in part because of his behavior and the fact he’s prone to outbursts. That’s what led the Guinottes to move Alan home.

Soon, though, the strain of providing Alan care and supervision, even with outside caregivers coming into help, took a toll on his parents who both still work.

Then came his health scare and the trip to the emergency room. It was then the Guinottes decided that Alan’s need for around-the-clock care and supervision was more than they could handle. With no other options, Alan remained at Providence St. Peter’s Hospital in Olympia.

The longer he was there the more agitated he got.

“He was going around climbing on furniture and taking the ceiling tiles down,” Guinotte recalled. 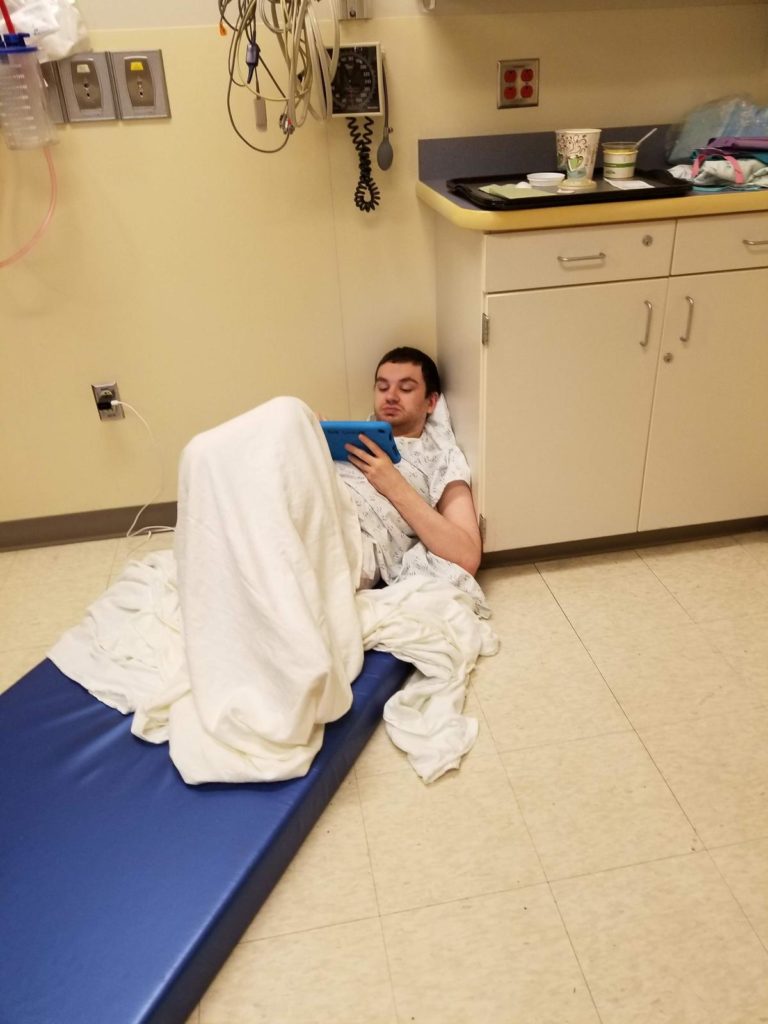 At St. Peter’s Hospital in Olympia, Guinotte slept on the floor because he would use his bed frame to reach the ceiling tiles and knock them down. COURTESY CAROLYN GUINOTTE

He also flooded his room and even escaped the hospital. Eventually, a mental health evaluator was called in and Alan was found to meet the criteria for involuntary psychiatric treatment. He was court-ordered to Western State Hospital.

After waiting several weeks, Alan was finally admitted to the HMH.

“For the first couple of months, he kept telling us, ‘Mummy go home, mummy go home.’ It broke my heart,” Guinotte said.

But over time, she said, Alan settled into a routine and his behaviors calmed down. Several weeks ago, Guinotte said Alan’s caseworker told her he was ready for discharge. But as before, there’s nowhere for him to go.

“He is stuck there until a house comes open,” Guinotte said.

In recent years, the state has been trying to build capacity in the community for clients like Alan.

“It’s important that individuals don’t stay in the hospital any longer than they need to,” said Evelyn Perez, the assistant secretary for DDA.

The 2017-19 biennial budget funded 13 additional State-Operated Living Alternatives (SOLA) beds which allowed 35 HMH patients to cycle into and out of the HMHs at Western and Eastern State Hospitals, according to DSHS.

The current state budget will fund an additional 24 SOLAs to serve patients like Alan. But Perez cautions those beds won’t come online overnight.

The state of Washington has struggled in recent years to serve developmentally disabled clients in the community — especially complex clients with behavior issues. The state’s developmental disabilities ombudsman, Betty Schwieterman, said the lack of services is resulting in more people like Alan ending up in both local hospitals and the state’s psychiatric hospitals.

“If the system was working appropriately, then people would get the services that they need in the community to avoid the crisis,” Schwieterman said.

Even for patients in crisis, Schwieterman said, hospitalization should be a last resort.

“There [should] be services that would be able to help them manage that crisis in their own home and own community where they wouldn’t have to be hospitalized,” Schwieterman said.

Next summer, a report is due to the governor and state lawmakers with recommendations for improving services to individuals with developmental disabilities and behavioral health needs.

In the meantime, Carolyn Guinotte wonders what will happen to her son.

“I wish that I could change things with the wave of a wand, but I’m not Harry Potter, unfortunately,” said Guinotte, who’s British.

Guinotte said she’s not asking for that much for her son.

“I want him to be happy and to have what he wants, which is his computer and access to Dairy Queen once in a while for an ice cream or go and see a petting zoo,” Guinotte said.

But Guniotte said she was recently told it could be next year before there’s a place for Alan outside of Western State Hospital.