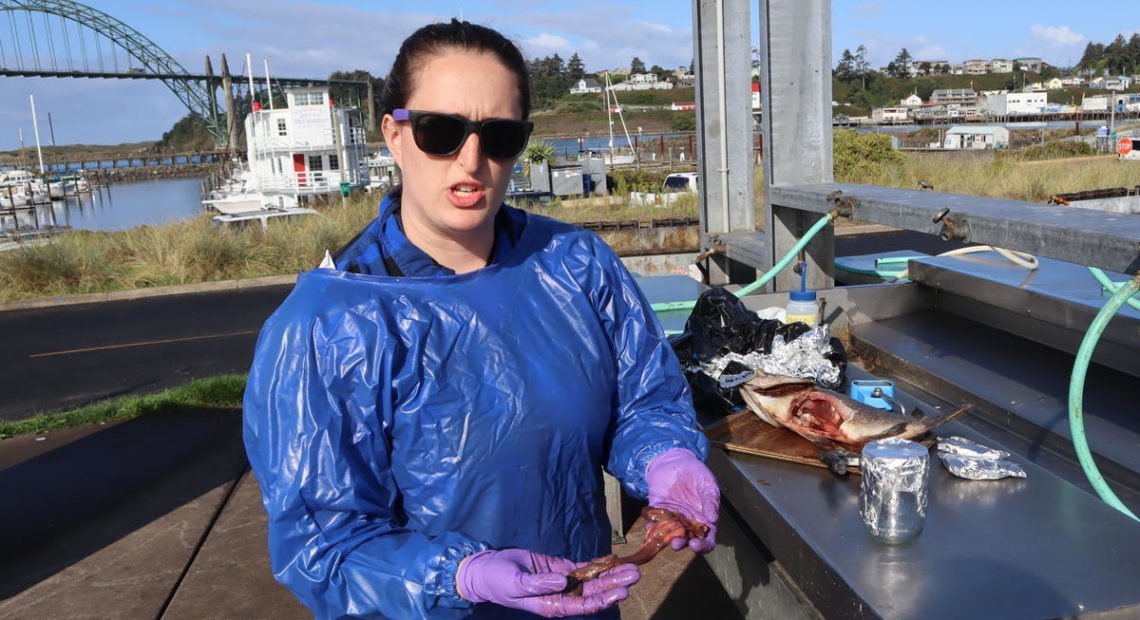 It was a dark and slippery early morning on the Oregon coast when researchers scrambled down the rocky shore in the small town of Yachats.

They kept one eye on the crashing waves while scanning for two species of Pacific Northwest sea life that are now being checked for microplastics — fibers and fragments less than 5 millimeters long.

A very low tide on Saturday accounted for the pre-dawn alarm to collect mussels and whelks that prey on the mussels.

“Mussels are filter feeders,” said Andrew Williams, a student on the Oregon State University research team. “They’ll eat whatever is coming by in the water. That includes microplastics.”

The mussel bed where Williams collected samples looked healthy. But most of the bivalves he has analyzed so far have ingested some plastic.

“We can use these as basically health indicators for our coastal systems,” Williams said.

Williams’ project is among many investigations underway of microplastics in Pacific Northwest waters. This has become a hot topic for local scientists, for similar reasons city and state policy makers and activists are debating plastic bag bans and how to reduce plastic straw and bottled water usage. All are concerned that the world’s oceans are awash in plastic trash and fibers.

Scientists from Oregon, Washington, and British Columbia are scrutinizing the marine food chain from top to bottom, from zooplankton to killer whales. Sea otters, river otters, oysters, various clams, rockfish and young salmon are also being analyzed for microplastics.

Oregon State master’s student Katherine Lasdin and her advisor suited up like surgeons on Saturday before tackling the messy, pungent task of slicing the gastrointestinal tract out of a donated rockfish at the Port of Newport. They have convinced a charter fishing company and the Oregon Fish and Wildlife Department to donate rockfish carcasses that would be otherwise discarded.

“It’s incredible that we have so many different species being worked on,” said Lasdin. “One of the unique things is that the ocean is not just one thing. You have to look at different species because intertidal organisms could feed other species that could eventually feed a fish or a whale. So it’s all linked together.” 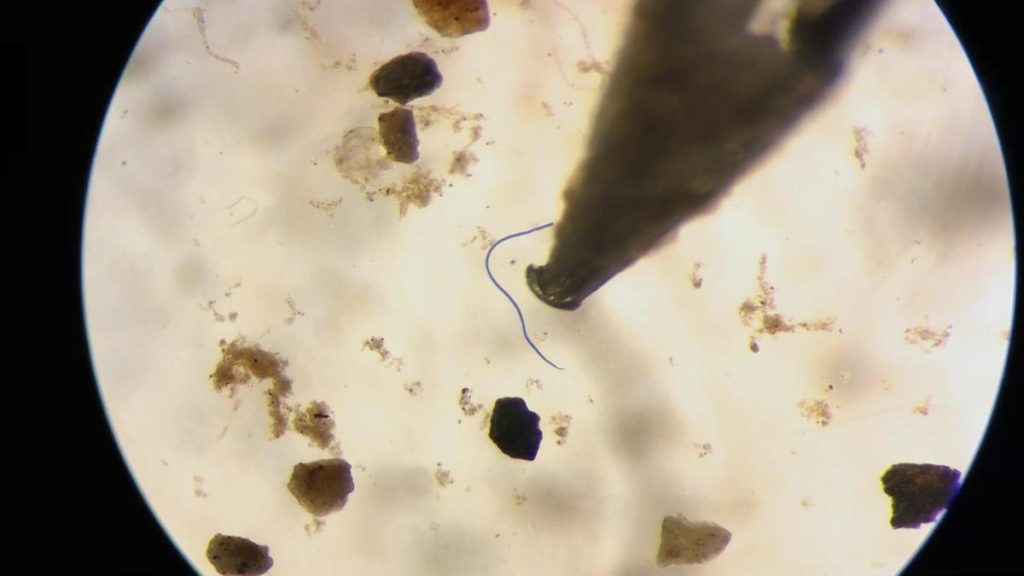 Microplastic fibers, like this one from an Oregon river, are less than 5mm and often show up in vivid color under the microscope.
CREDIT: TODD SONFLIETH / OPB

Researchers from NOAA working on the critically-endangered killer whales and an OSU team looking at otters rely on poop samples to study their subjects. Marine mammal poop is difficult to discern and collect in the wild; the otter project has evolved to include some samples from wild critters scooped up from haul outs on land as well as samples from captive sea and river otters at the Seattle Aquarium.

Many samples funnel through a lab on the OSU Corvallis campus supervised by toxicologist Susanne Brander.

There the fish and bivalve tissues get dissolved in a solution similar to lye. Among the leftovers are bits of suspected plastics. These are usually so microscopic, it’s challenging to prove a fragment used to be a plastic straw or a grocery bag. Brander actually expects the most common finds to be fibers from synthetic ropes, nets and especially clothing.

“If you wash your fleece or your nylon jacket, there are small amounts of fibers that come off each time you wash it,” Brander explained. “A lot of that is getting out into freshwater, into the ocean and then that is easily accumulated by animals.” 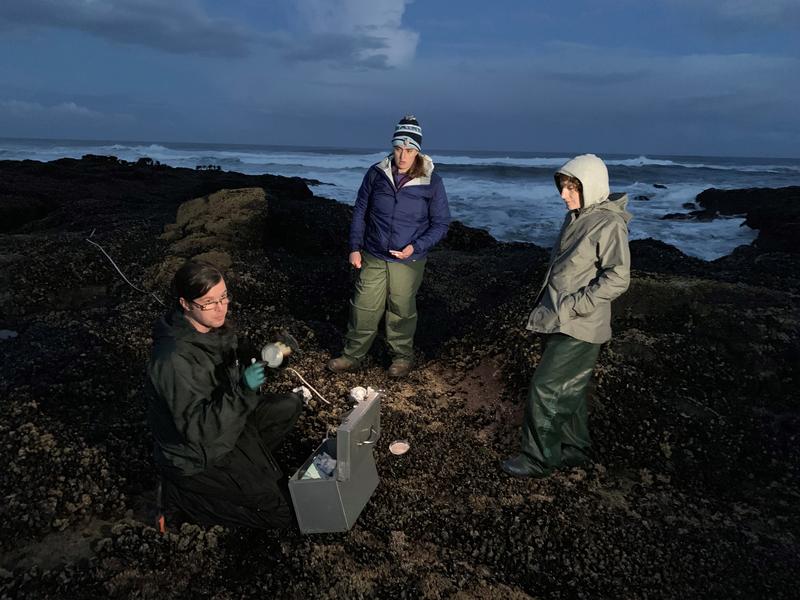 Earlier this year, Portland State University researchers Britta Baechler and Elise Granek determined that 99% of the microscopic plastics they found in Oregon coast oysters and razor clams were fibers. Millimeter-short fibers that enter the environment from laundering synthetic clothes can pass through sewage treatment plants.

None of the Pacific Northwest scientists contacted by public radio could say yet whether the species they are studying are being harmed by ingested plastics.

“We’re still in the beginning stage of finding out what the impacts are of ingesting those microplastics,” said OSU master’s student Jennifer Van Brocklin, who is working on sea otters and river otters. “The first step is to find out how many microplastics they are ingesting and what the size and types of plastic are.”

“A sub-lethal effect would be something like an effect on growth, or an effect on the number of eggs than an animal is able to reproduce, or its ability to swim,” she said in an interview. “Although those effects are called sub-lethal effects, ultimately they can affect total population size.”

Now if scientists are finding microplastics in all kinds of local marine life, should we be worried about consuming seafood? Brander herself is fond of scallops and continues to eat them.

“For right now, the health benefits of eating seafood probably outweigh the potential risks,” Brander said. “But we’re working on that.”

Brander mentioned an Australian study published this summer that said humans unwittingly consume about a credit card’s worth of plastic each week — roughly 5 grams. She said it’s presently unknown whether those tiny plastic particles inside us have health effects.

Marine scientists and toxicologists from Corvallis to Vancouver, B.C., are meeting at the Seattle Aquarium Tuesday and Wednesday to compare notes and standardize methods for monitoring plastics in local waters.

Several studies have shown that microplastics, which are tiny pieces of plastic that make up other larger plastic items, can make their way into fish, crustaceans, clams, oysters and ultimately into us, the people that eat them. Continue Reading Scientists Discover Microplastics In Northwest Oysters And Clams

U.S. Recycling Industry Is Struggling To Figure Out A Future Without China

The U.S. used to send a lot of its plastic waste to China to get recycled. But last year, China put the kibosh on imports of the world’s waste. The policy, called National Sword, freaked out people in the U.S. — a huge market for plastic waste had just dried up. Where was it all going to go now? Continue Reading U.S. Recycling Industry Is Struggling To Figure Out A Future Without China