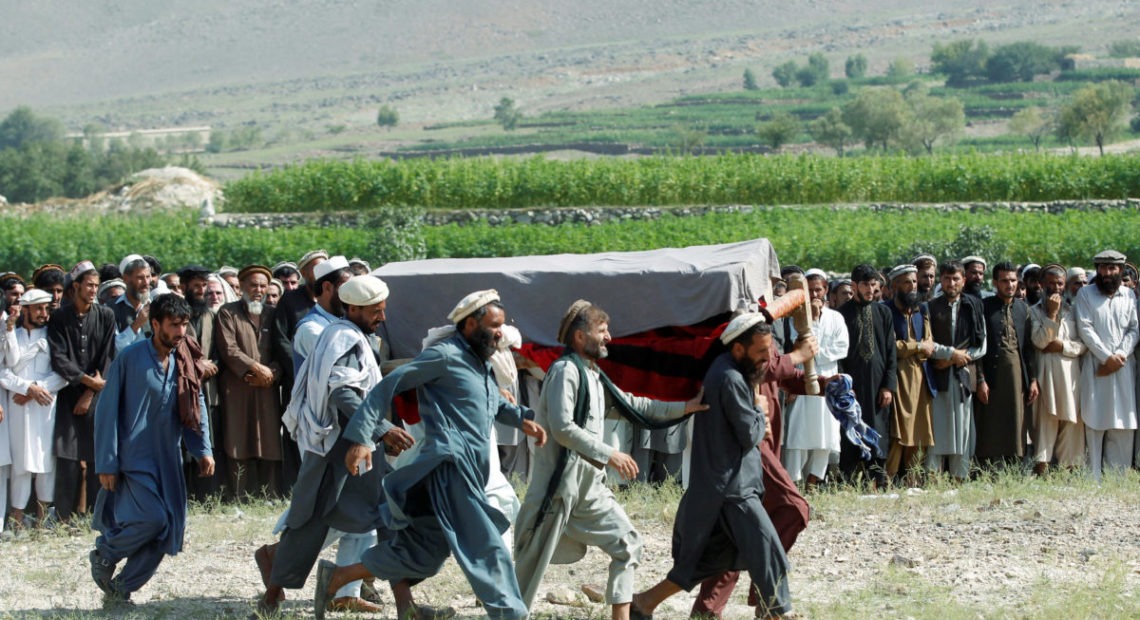 The workers were sleeping on the mountainside where they had spent a long day harvesting pine nuts in eastern Afghanistan. Some were in tents, others lay outside under the stars, when the U.S. airstrike tore into them.

Only hours before the Sept. 19 strike, the businessman who hired them had heard there was a drone over the mountain and called Afghanistan’s intelligence agency to remind an official his workers were there — as he’d notified the agency days earlier. 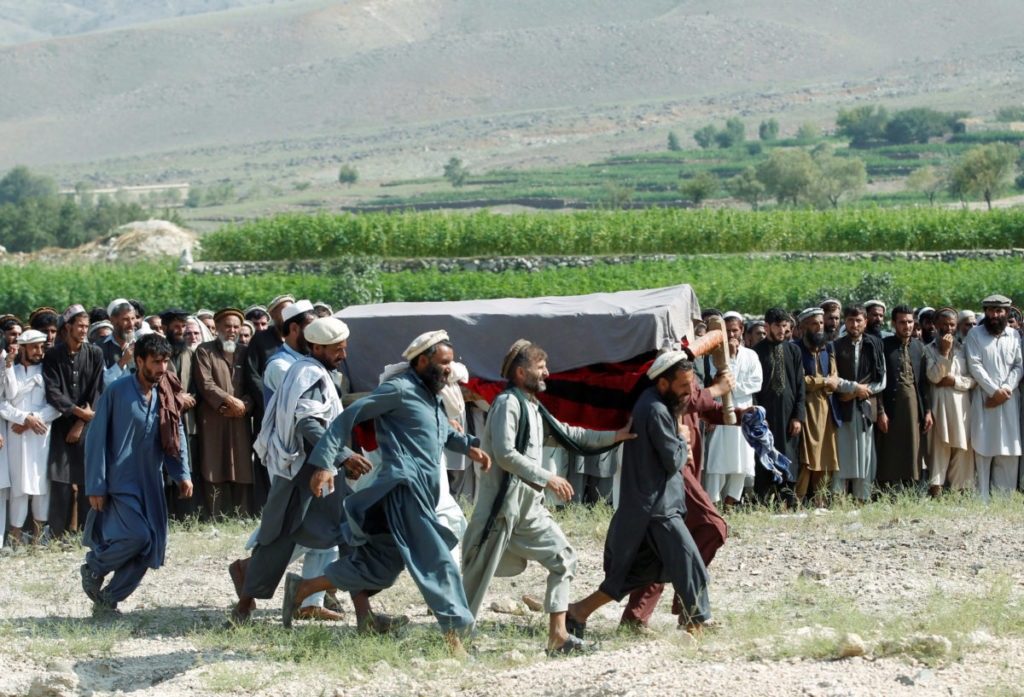 Men carry a coffin of one of the victims after a drone strike, in Khogyani district of Nangarhar province, Afghanistan September 19, 2019. CREDIT: Parwiz/Reuters

“He laughed and said, ‘Don’t worry they are not going to bomb you,’” the businessman, Aziz Rahman, recalled.

Twenty workers were killed in the strike, including seven members of one family. A relative, Mohammed Hasan, angrily described body parts they found scattered on the ground, gesturing at his arm, his leg, his head.

“This is not their (Americans’) first mistake,” said Hasan. “They say ‘sorry’. What are we supposed to do with ‘sorry?’ … People now are angry. They are so angry with the foreigners, with this government.”

Increasing civilian deaths in stepped-up U.S. airstrikes and operations by Afghan forces highlight the conundrum the U.S. military and its Afghan allies face, 18 years into the war: How to hunt down their Islamic State group and Taliban enemies, while keeping civilians safe and on their side.

Complaints have also grown over abuses and killings by a CIA-trained Afghan special intelligence force known as Unit 02. In the same province, Nangarhar, members of the Unit killed four brothers during a raid on their home. The brothers’ hands were bound and they were shot in the head.

Former President Hamid Karzai, in a recent interview with The Associated Press, said he didn’t want the U.S. troops for “one more minute” if deaths of civilians continued.

Some 16,000 civilians have been killed since 2009 in the war, according to the U.N. Overall, civilian deaths are down so far this year, on track to the lowest number since 2012.

But civilian deaths caused by U.S. and Afghan government forces are rising, surpassing for the first time those caused by the Taliban and other insurgents, according to a U.N. report .

Michael Kugelman, deputy director of the Asia Program at the Washington-based Wilson Center, said that is because U.S. President Donald Trump has sought to ramp up pressure on the battlefield amid negotiations with the Taliban and has loosened rules of engagement for U.S. forces.

“In effect, the Trump administration has given its blessing to U.S. forces to use a more gloves-off approach on the battlefield that raises the risk of civilian casualties,” he said.

In early September when Trump declared as “dead” a deal with the Taliban that had seemed imminent, he boasted the U.S. had “been hitting our enemy harder than at any time in the last ten years.”

Last week, Defense Secretary Mark Esper said: “We did step up our attacks on the Taliban since the talks broke down. . . we did pick up the pace considerably.”

According to the U.S. Air Forces Central Command, the U.S. conducted more bombings and drone strikes in Afghanistan in August than in any previous month this year — 783, compared to 613 in July and 441 in June.

Dropping more bombs doesn’t appear to be working. The Taliban are stronger than they have been since their ouster in 2001, and IS is expanding its footprint, moving into the mountains of the northeast, according to a U.S. Department of Defense intelligence agent. He spoke on condition of anonymity because of the sensitivity of his work.

In an interview with The Associated Press, Afghan Defense Minister Asadullah Khaled disputed the U.N. report, saying “we do not have a lot of civilian casualties.” He accused the Taliban and their sympathizers of inflating numbers.

Khaled seemed to put some blame for the deaths in the Sept. 19 strike on the farmers. He said they were working on a mountain where IS is known to have bases, without informing the authorities.

But Rahman did inform authorities all the way to the provincial governor’s office, according to documents dated Sept. 2 and seen by the AP.

When he heard of the drone over the site, Rahman called the local office of Afghanistan’s intelligence agency, known as the National Defense Secretariat, to remind them.

Initially, the U.S. military announced it had killed 16 Islamic State group fighters in a strike in that area that date. As angry villagers brought bodies of the dead to the provincial capital of Jalalabad, the U.S. military backed off that and said the incident was being investigated.

More than three weeks after the incident, the U.S military said the investigation was ongoing.

Gen. Scott Miller, chief of the U.S.-led coalition in Afghanistan, said the best way to decrease civilian casualties is for both sides to reduce violence.

“That said, my commitment to the Afghan people is we will be as precise as possible and support your security forces and when something goes wrong … we will quickly own it and look to provide the appropriate compensation for those mistakes,” Miller said.

Speaking at the Nangarhar provincial capital of Jalalabad, Rahman showed his notebook where he meticulously wrote down the names of his dead workers in a notebook — 20 men.

Jabeen was the only wage earner for his household — a wife, four children and his elderly father. He made 400 Afghanis ($5) a day harvesting pine nuts. Many Afghans use on only one name.

Wahidullah had just married. He hadn’t had a chance to start a family. He and his young wife lived with his father.

Abdullah was the father of two children, the eldest a 5-year-old daughter. His elderly mother lived with him.

Ibrahim left behind a wife and three children, now being watched over by his father.

On Sept. 23, U.S air support of an Afghan operation against Taliban and al-Qaida in southern Helmand province’s Musa Qala district killed at least 40 people attending a wedding. Most of the dead were women and children, according to Abdul Majed Akhund, deputy provincial councilman.

An airstrike by U.S.-led forces a week ago in a Taliban-controlled district in central Ghazni province killed at least five civilians, local villagers said. Angry villagers carried the bodies to the provincial capital shouting, “Death to Ashraf Ghani,” referring to the Afghan president, and “Death to America.”

It’s not just the U.S. air raids that are infuriating Afghans.

President Ghani fired his intelligence chief Masoom Stanikzai last month after complaints from Afghans and the United Nations about widespread abuses by the CIA-trained Unit 02. As early as last year, the U.N. asked the government to implement more oversight over the unit.

The firing came after members of the unit raided a home in Jalalabad, only meters (yards) from the Justice Ministry, and killed four brothers. Family members showed the AP photos of the bodies, bound and shot in the head. One of the brothers was an assistant to a close ally of Ghani. Their uncle, Ibrahim Malikzada, said the Unit’s soldiers also took cash and jewelry.

The Unit reported that the dead were insurgents, a claim denied by the family. Eight others were arrested in the raid and later released.

Kugelman of the Wilson Center warned, “These increasing civilian deaths threaten to turn the tide of Afghan public opinion against the United States at a moment when there is already a risk of U.S. forces wearing out their welcome.”