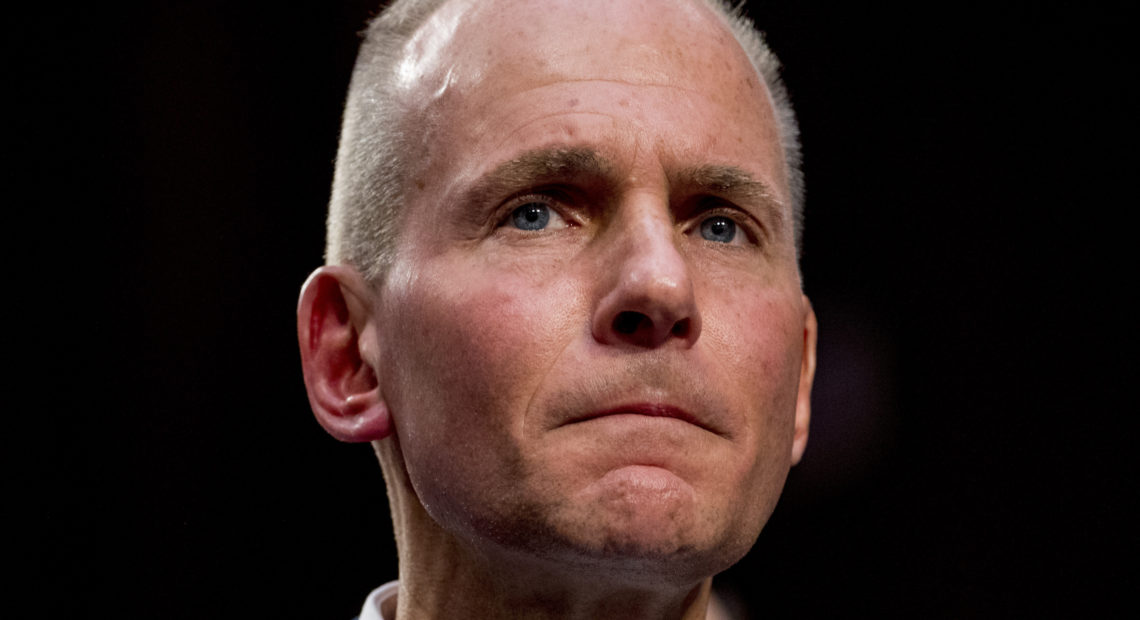 Dennis Muilenburg, the president and CEO of Boeing, appeared before a Senate panel Tuesday where he was peppered with questions regarding a pair of crashes of 737 Max jets and was asked if the company purposefully hid sensitive information about flaws in its onboard flight system from regulators.

Muilenburg spent most of the two and half hours acknowledging that Boeing made mistakes. He also offered condolences to the relatives of the 346 people killed in the 2018 Lion Air crash in the Java Sea off the coast of Indonesia and the Ethiopia Airlines flight that crashed shortly after takeoff from Addis Ababa in March.

“On behalf of myself and the Boeing company, we are sorry, deeply and truly, sorry,” Muilenburg said during his opening statement.

Seated behind him were family members of the victims who died in the crashes. At one point they were asked to stand and hold up photos of their lost relatives. 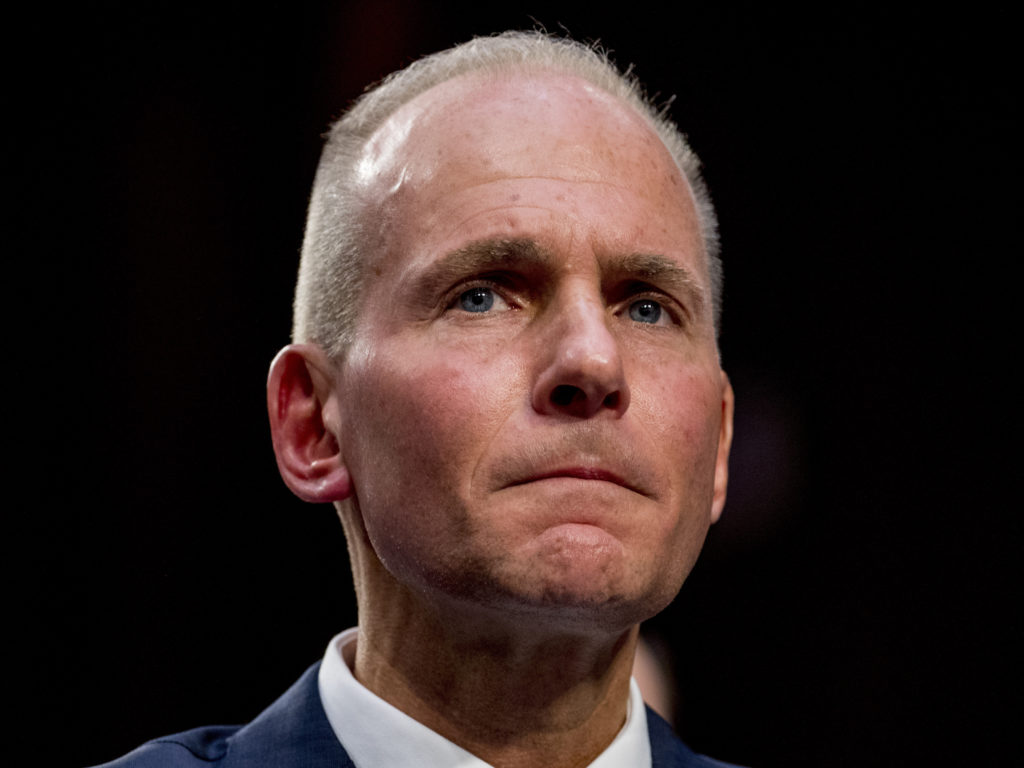 Boeing President and CEO Dennis Muilenburg appeared before the Senate Transportation Committee on future of the grounded 737 Max on Tuesday. CREDIT: Andrew Harnik/AP

Muilenburg said he thinks about the victims every day.

“I know that probably doesn’t offer much comfort and healing at this point,” he said. “But I want you to know that we carry those memories with us every day.”

The Senate Commerce, Science and Transportation Committee hearing, which took place on the anniversary of the Lion Air tragedy, featured pointed questions from lawmakers about the onboard flight-control system known as MCAS. That system, which is implicated in both crashes, acted on faulty data causing planes to nosedive uncontrollably.

“First of all the premise that we would lie or conceal is just not consistent with our values,” Muilenburg said.

Earlier this month a group of international aviation safety experts found Boeing withheld vital information regarding MCAS from the Federal Aviation Administration, adding that the system “was not evaluated as a complete and integrated function in the certification documents that (Boeing) submitted to the FAA.”

Last week, investigators in Indonesia determined that a design flaw in MCAS was the primary cause of the Lion Air disaster.

The FAA announced it was grounding the 737 Max series in the U.S. and its territories in March. That decision which came, in some cases, days after dozens of nations worldwide temporarily banned the planes from their airspaces following the Ethiopian Airlines crash.

“We’ve made mistakes and we got some things wrong. We’re improving and we’re learning and we’re continuing to learn,” Muilenberg said Tuesday.

When pressed on why Boeing pushed regulators to allow Max planes around the world to keep flying after the first crash in 2018, Muilenberg replied, “I think about that decision over and over again. If we knew then what we know now, we would have made a different decision.” 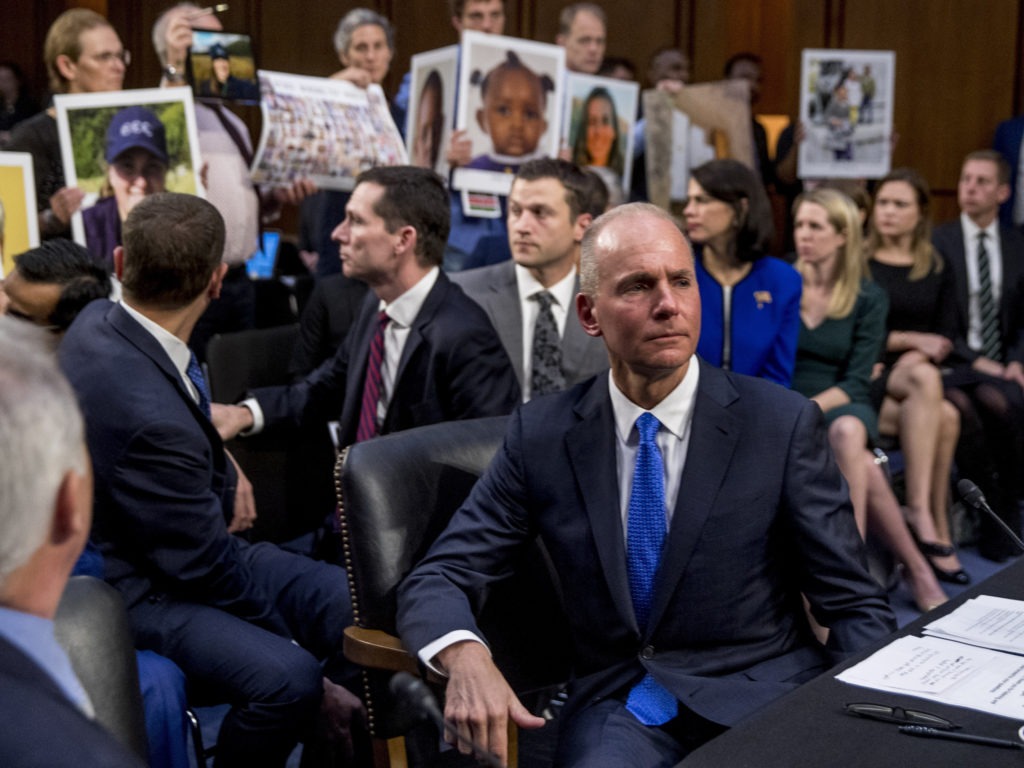 Forkner, who has since left Boeing, described MCAS at the time as “running rampant” and “the plane is trimming itself like crazy.”

Cruz pressed Muilenburg, “How in the hell did nobody bring this to your attention in February when you produced this to the Department of Justice? How did you just read this a couple of weeks ago?”

“I didn’t see the details of this exchange until recently,” Muilenburg said. “I fully support diving deep into this and understanding what he said and what he meant.”

Others, like Sen. Tom Udall, D-N.M., said part of the problem is that Boeing is too intertwined with the aviation industry regulators.

“It’s absolutely clear that it’s too cozy a relationship with the FAA,” Udall said. “It appears Boeing’s own culture is more blameworthy for installing a faulty system that resulted in too many deaths and could have caused more.”

Muilenburg pushed back on media reports that claim Boeing places blame for the crashes on the pilots of the Lion Air and Ethiophian Airlines planes.

“I know that has been reported, but that is not our company position,” he said. “We are responsible and we own that, regardless of cause.”

He said the committee has plenty of work to do before he feels confident the 737 Max can take flight in the U.S. again.

“You shouldn’t be cutting corners and I see corners being cut,” Tester said. “And this committee’s going to have to do something to stop that from happening.”