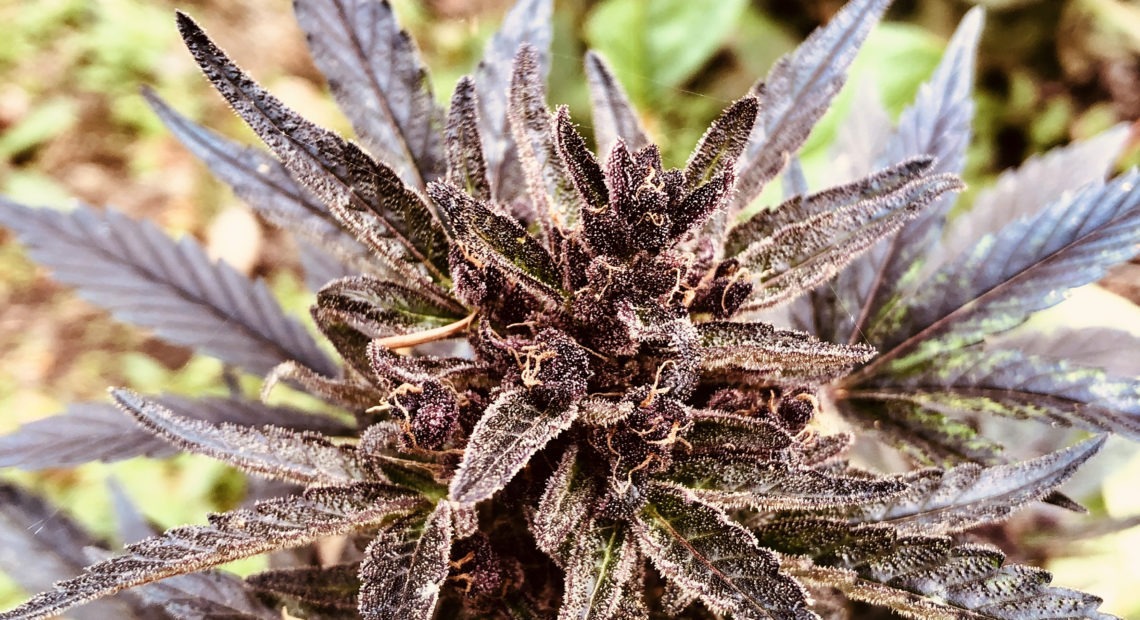 Water and wildlife in the nation’s public forests are slowly being poisoned by insecticides and other chemicals used in illegal marijuana operations, say forest police and researchers. They warn that the potential environmental damage could last generations.

Many of the grows are the work of highly organized drug cartels that take advantage of the forests’ thick canopy to help hide their operations. Some sites can go undetected for years.

“The true crime here is the fact that they’re killing off basically America’s public lands, killing off the wildlife, killing off our water,” says Kevin Mayer, a U.S. Forest Service law enforcement assistant special agent in charge. “This is stuff that, you know, it’s not gonna repair itself.”

Now, an unlikely coalition in California — including environmentalists, law enforcement agents, politicians, wildlife ecologists and representatives of the legal cannabis industry — have joined forces to try to reduce these illegal operations and the environmental threat they pose. 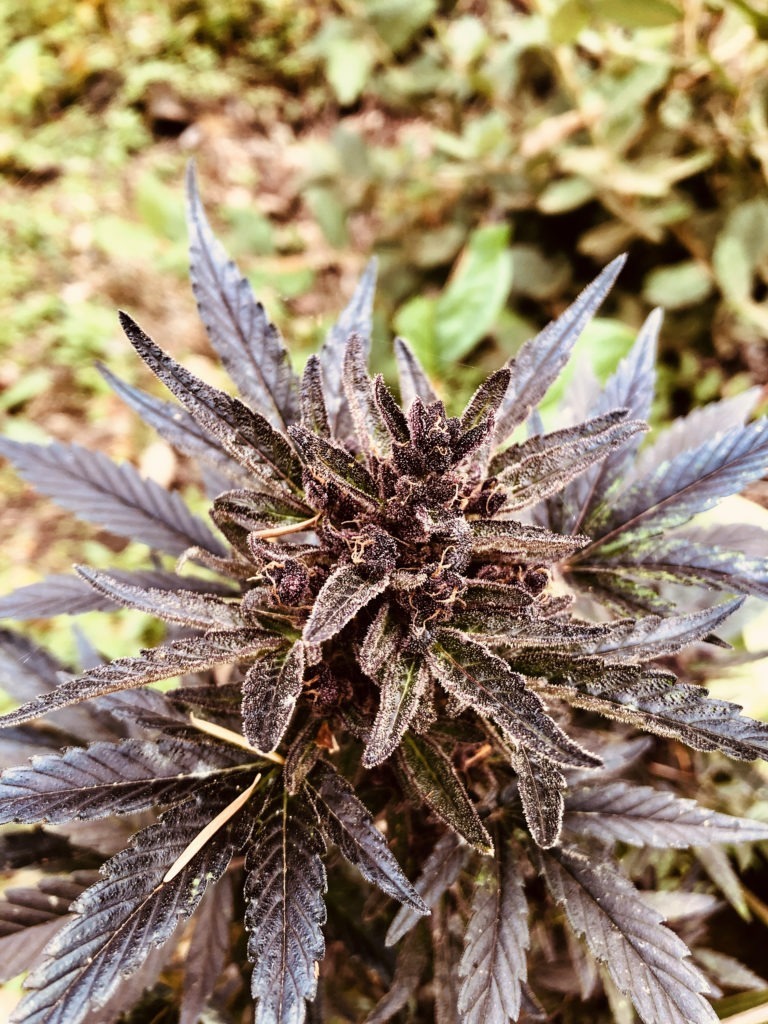 A marijuana plant grows in California’s Shasta-Trinity National Forest. This plant is part of an illegal growing operation by highly organized drug cartels that take advantage of the forests’ thick canopy to help hide their operations.
CREDIT: Eric Westervelt/NPR

Some in that coalition recently visited a site discovered deep in California’s Shasta-Trinity National Forest. They and a group of armed Forest Service agents made their way down a steep hillside above a creek on a warm fall day, through a tangle of Douglas fir and madrone trees, and big leaf maples turned golden yellow.

Finally, the forest gives way to a sprawling grow and camp site. It’s typical in shape: terraced plots carved erratically into a hillside scared by wildfire. The burned trees and new growth offer some cover from air surveillance. Two Mexican nationals were arrested at the site in September; they are suspected of being affiliates of a cartel.

There’s some 3,000 pounds of trash here from discarded clothes and propane tanks to 3 miles of plastic irrigation pipes — an indication this site has likely been used for years. Most of it eventually will have to be hauled out by helicopter.

But the trash is the least of the problem.

“This one is Bromethalin, which is a neurotoxin rodenticide,” says wildlife ecologist Greta Wengert, holding a spent container that held bags of bait blocks to kill rodents. The plastic irrigation lines snake around a makeshift kitchen littered with open bags of fertilizer and spent bottles of commercial insecticide.

Wengert points to a tree where she found about a gallon of concentrated carbofuran, an insecticide banned by the Environmental Protection Agency for all legal purposes. Carbofuran is produced in the U.S. by Pennsylvania-based FMC Corp, which exports the product to Mexico, India and other nations. The EU, Canada and Brazil have full bans on carbofuran.

“It is incredibly toxic,” Wengert says. “A quarter teaspoon could kill a 600-pound black bear. So obviously just a tiny amount can kill a human. It remains in an ecosystem for a long period of time.”

Wengert, who studies the effects of illegal grows on forest ecosystems, is co-founder of the Integral Ecology Research Center, a California nonprofit. She was present at the recent bust to help mitigate exposure, assess damage and clean up toxicants.

“We have detected [carbofuran] in the soil, in cannabis plants, in native vegetation, the water, the infrastructure. You name it we have detected it,” Wengert says. “It’s horrible.”

Trespass pot growing has been a problem for many years — from hippies to cartels. But what’s new, Wengert says, is that cartel growers are using more poisons and spreading them indiscriminately on the pot, the soil, all around.

They do that to protect their cash crop from insects as well as from rodents that like to chew into the plants for water. And an increasing body of research, including her own, shows alarming levels of pesticide and insecticide contamination of the entire wildlife food web in the state’s national forests. 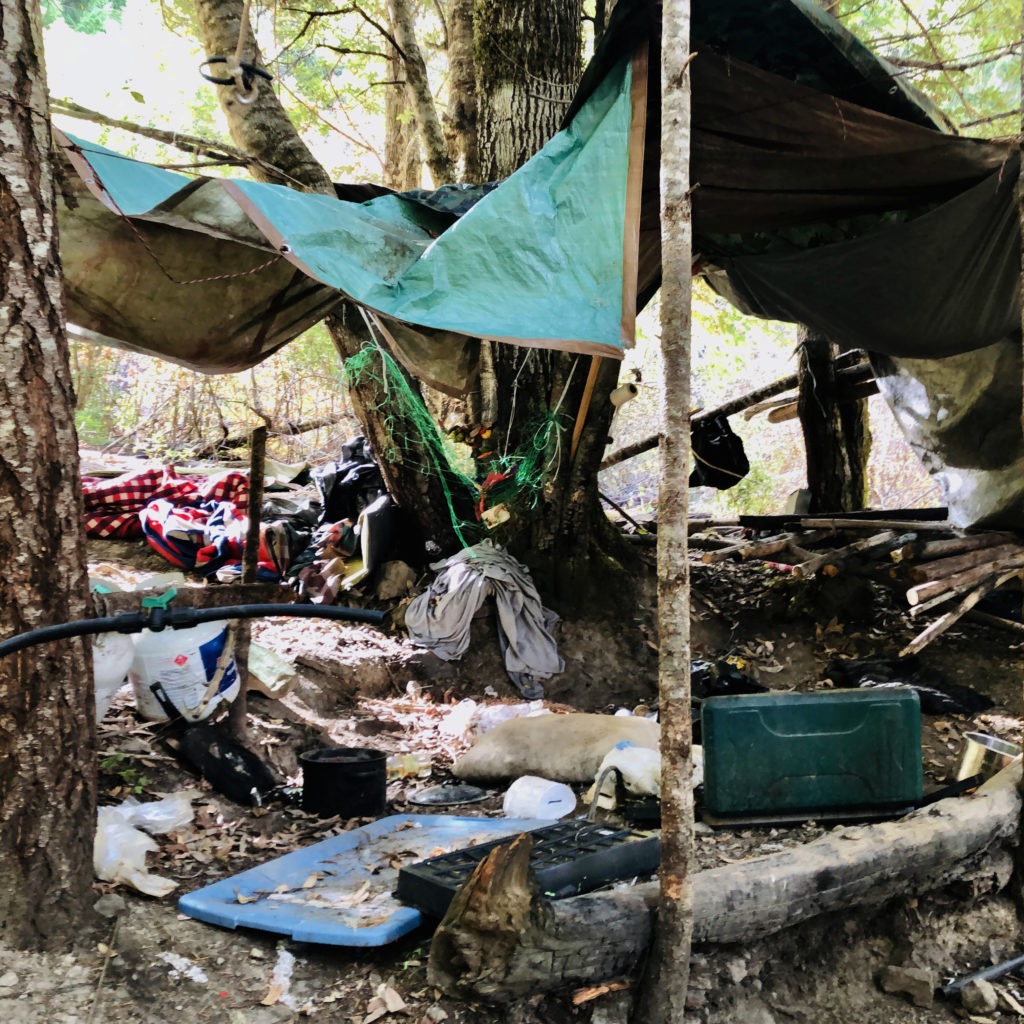 A sprawling grow and camp site was abandoned in California’s Shasta-Trinity National Forest. There’s some 3,000 pounds of trash here from discarded clothes and propane tanks to 3 miles of plastic irrigation pipes — an indication this site has likely been used for years. CREDIT: Eric Westervelt/NPR

“The mountain lion population in California is exposed to anticoagulant rodenticides at a rate well over 90%,” she says. “We’re just getting data on rodents, the prey base for all the species that are of concern when you’re talking mountain lions, fishers, foxes, spotted owls other forest raptors, the prey base that is supporting these species is contaminated.”

That exposure is starting to turn up in damage to wildlife offspring, including to Pacific fishers, an elusive carnivore in the weasel family that prefers remote forests. It’s a candidate for listing under the federal and California Endangered Species Act.

Mourad Gabriel, Wengert’s colleague and a wildlife disease ecologist, has documented that 85% of California fishers have been exposed to rodenticide. 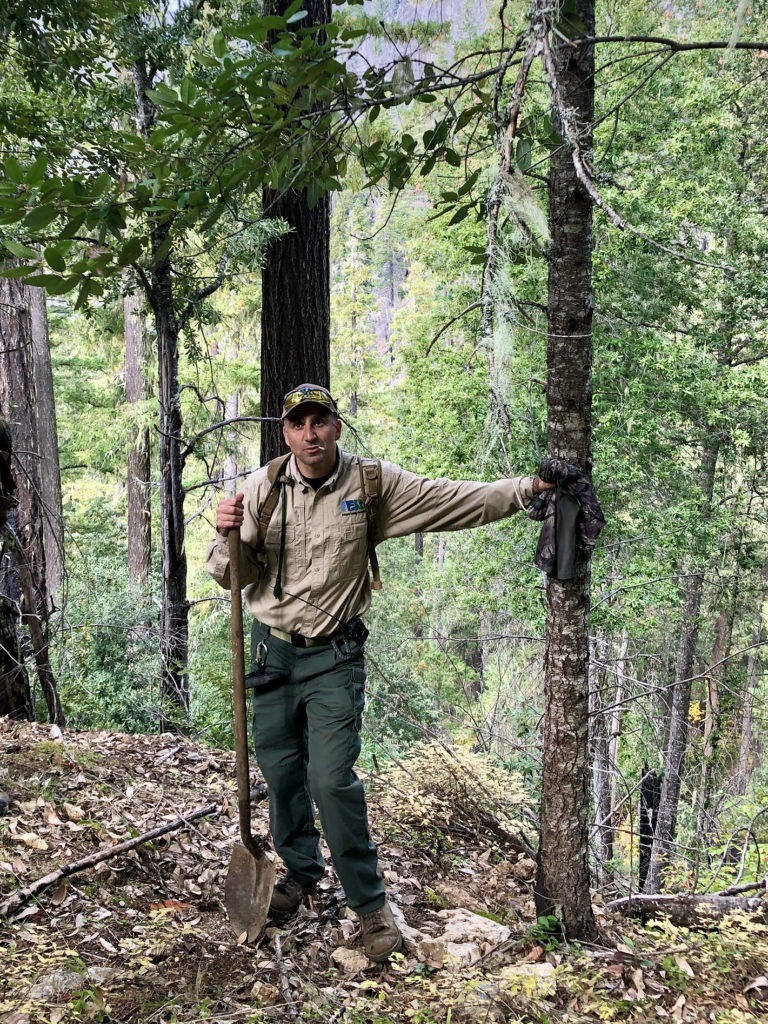 Wildlife disease ecologist Mourad Gabriel has documented that 85% of California Pacific fishers have been exposed to rodenticide. Fishers are an elusive carnivore in the weasel family that prefer remote forests.
CREDIT: Eric Westervelt/NPR

“In Fishers, there is an in utero transfer and mother’s milk transfer as well,” Gabriel says. “The female is transferring that anticoagulant rodenticide to her fetuses or when she has birth and she gets exposed, she can transfer to that mother’s milk.”

And when Fishers and other exposed wildlife die, for example, a whole host of animals and insects the feed on the carcass spreading the poisons further.

“It is very similar to the same long-term legacy effects that DDT posed back in the day,” Gabriel says, referring to the infamous insecticide that nearly wiped out several species, including the bald eagle, before its 1972 ban in the U.S.

There’s evidence, too, that waterways and fish are being harmed by the trespass grows. This site is uphill from a major creek. So as the water flows from into larger tributaries, there is a good chance of contamination, researchers say, and not just the water.

“Potentially aquatic organisms in the aquatic ecosystems could be impacted as well. We are already seeing signs” of contamination, Gabriel says.

But the agency doesn’t really know just how many sites are out there on federal lands. Officials estimate they find fewer than half.

On all lands in California — private, state and public — law enforcement seized more than $1.5 billion worth of illegal marijuana in fiscal 2019, the state’s attorney general says.

“Illegal cannabis grows are devastating our communities. Criminals who disregard life, poison our waters, damage our public lands, and weaponize the illegal cannabis black market will be brought to justice,” Attorney General Xavier Becerra said in a statement.

In all police arrested 148 people and confiscated 168 weapons from 345 raided grow sites across the state under California’s Campaign Against Marijuana Planting, or CAMP program, which includes local, state and federal partners, including the Forest Service.

The Forest Service gets some limited air support from CAMP to help spot illegal grow sites. But officials say it’s not nearly enough. This Shasta-Trinity site was found with the help of a computer algorithm that scans satellite and aerial imagery for irregularities in the landscape.

“When you add a human element, which is rows of plants, these are anomalies on the landscape that can be detected that are distinct from the natural vegetation,” says Adam Cummings, a biologist and Forest Service research fellow who helped develop the algorithm. “I see it as a piece of a puzzle to help reduce the number of these on our landscape and clean up the trash and toxins that are left.”

Despite legalization in 11 states and the District of Columbia, there’s a thriving black market for pot. Drug cartels still see a way to make fast cash. This site alone produced nearly 9,000 plants, officials say, worth an estimated full-harvest street value of some $1.5 million.

“We estimate that that 95% or more of the grows on public lands are controlled by foreign drug trafficking organizations,” says Rich McIntyre, who directs CROP, the Cannabis Removal on Public Lands Project.

CROP is a new group trying to get more public funding to clean up these sites and boost police, science and public support for the issue. “These growers are trying undercut the legal market by about 50 percent, and of course, a lot of the product that they’re growing is filled with these poisons,” McIntyre says, “and it’s likely finding its way into the market in various forms — flower, oils and vape pens.”

Forest Service budget cuts have left the agency without enough boots on the ground to stop more of the grows let alone help repair the damage. There are just six law enforcement agents to patrol the 2.2 million-acre Shasta-Trinity, California’s largest national forest.

The agency also does not have any reclamation or hazardous materials teams to deal with this expanding problem. In addition to wildlife, there’s concern about the risks to hikers and other park users.

A recent analysis by the group Headwaters Economics showed that visitation to U.S. Forest Service and Bureau of Land Management land has risen by about 15% over the past decade, while budgets to support recreation in those agencies has fallen by a similar amount, as NPR has reported.

“The Forest Service is grossly underfunded on a number of fronts not just on a law enforcement front but on the scientific front as well. And that’s something that we hope to change,” CROP’s McIntryre says.

There’s evidence this Shasta-Trinity site was active in 2015 and reactivated again this year.

“The solutions are very simple: You prevent it. You eradicate it. You remove the infrastructure and remove the chemicals,” says Gabriel, the disease ecologist. “But if there’s no funding mechanism and we don’t remove this infrastructure, it will be reactivated in the next couple years” by the very same growers.

In California alone, there’s a daunting backlog of some 2,000 contaminated illegal grow areas in national forests, he says. Those are thousands of minitoxic sites in your national forests waiting for a basic cleanup.