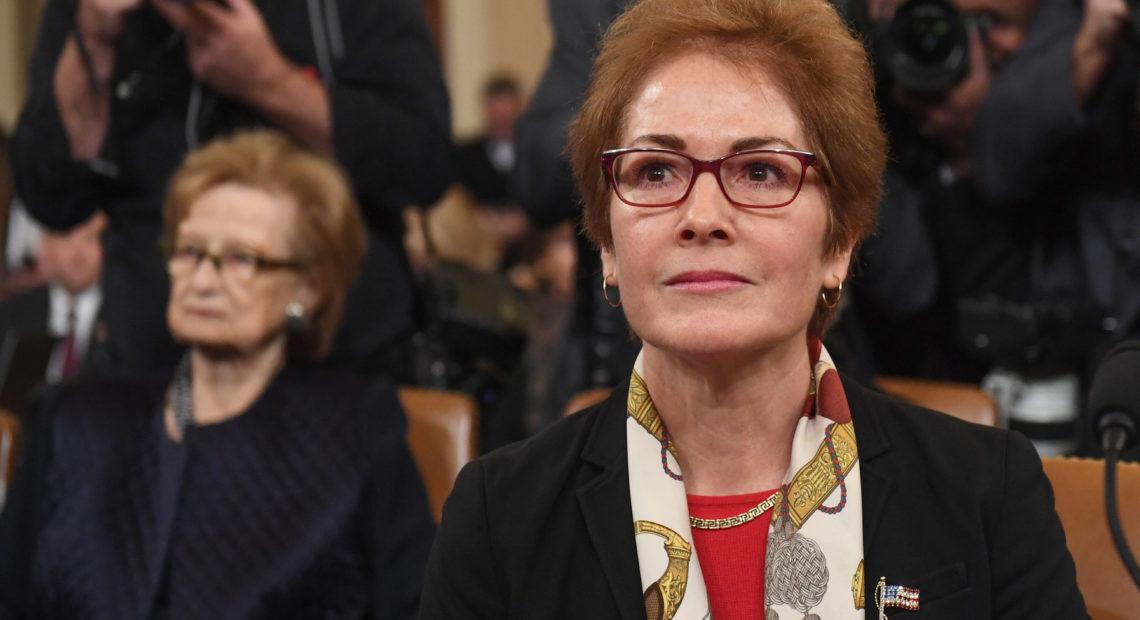 President Trump denied he was trying to intimidate a witness in Democrats’ impeachment inquiry on Friday when he posted about her on Twitter as she testified before Congress.

Trump posted two tweets about Ambassador Marie Yovanovitch as she was live on television talking with the House Intelligence Committee.

The messages linked her to problems in the troubled countries in which she had been posted and restated the president’s power to appoint and remove diplomats as he wishes.

Intelligence Committee Chairman Adam Schiff, D-Calif., paused the testimony to read Yovanovitch portions of the tweets during the hearing. He asked what effect she thought it might have on witnesses’ willingness to come forward and expose wrongdoing. 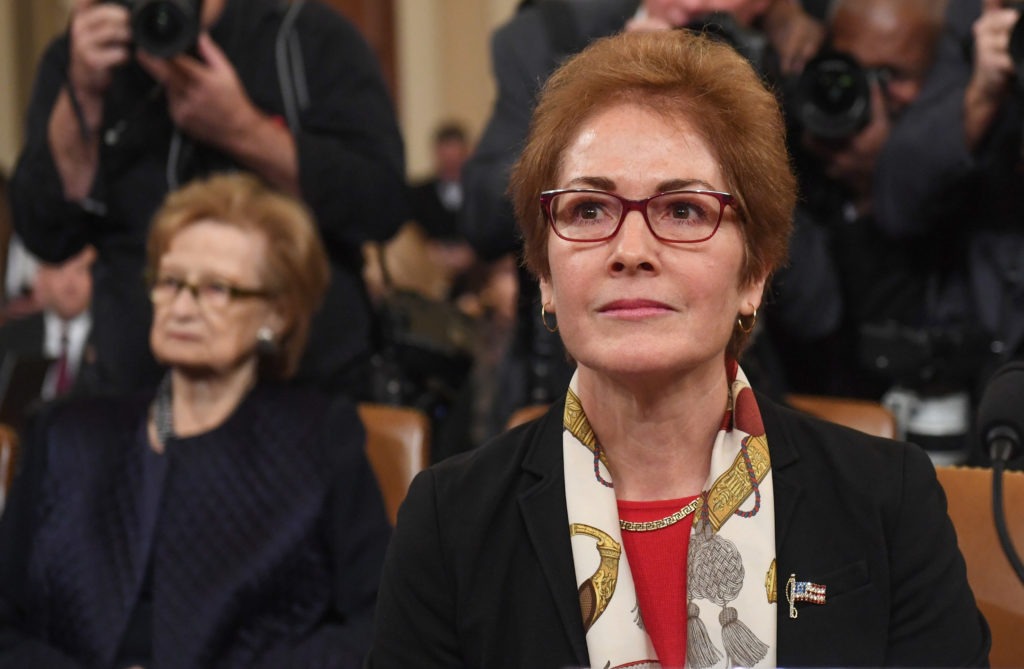 “It’s very intimidating,” she said, although Yovanovitch said she couldn’t address what Trump’s intentions might have been.

Responded Schiff: “Well, I want to let you know, Ambassador, that some of us here take witness intimidation very, very seriously.”

The chairman repeated his warning to reporters during a break in the hearing. Afterward, Schiff linked what he called the intimidation with an “incriminating” pattern of conduct by Trump.

Trump also complained that the hearing was a political process that was unfair to Republicans.

Witness about early phase of saga

Yovanovitch was a key witness about the earliest phase of the Ukraine affair.

She lost her post in Ukraine’s capital, Kyiv, earlier this year after what has been described as a smear campaign by Trump’s attorney, Rudy Giuliani, and associates Lev Parnas and Igor Fruman, witnesses have told House investigators.

Those three worked with Ukraine’s then-Prosecutor General Yuri Lutsenko to spread what Yovanovitch called lies about her, including that she was disloyal to Trump and that she had given Lutsenko a list of Ukrainians she didn’t want prosecuted.

Everywhere Marie Yovanovitch went turned bad. She started off in Somalia, how did that go? Then fast forward to Ukraine, where the new Ukrainian President spoke unfavorably about her in my second phone call with him. It is a U.S. President’s absolute right to appoint ambassadors.

Parnas and Fruman have been arrested and charged with violating U.S. campaign finance law; they have pleaded not guilty. An attorney for Parnas has told NPR he’s open to working with congressional impeachment investigators, but the outlines of that aren’t clear.

Prosecutors may be investigating whether Giuliani stood to profit from a natural gas business linked with Parnas and Fruman, The Wall Street Journal reported on Friday.

Meanwhile at the Capitol, Schiff said that Yovanovitch’s ouster was a necessary prologue to the main story about Ukraine — that Trump and Giuliani had to push her out of the way to put in place the shadow lane for communication they wanted outside of officialdom.

“Getting rid of Ambassador Yovanovitch helped set the stage for an irregular channel that could pursue the two investigations that mattered so much to the president: the 2016 conspiracy theory, and most important, an investigation into the 2020 political opponent he apparently feared most, Joe Biden,” Schiff said.

Military assistance for Ukraine was frozen by the White House for a period of weeks this summer, then released. Ukraine’s president, however, never made the public commitment for investigations that intermediaries have said they sought on Trump’s behalf.

Yovanovitch warned Congress on Friday that the precedent set by her recall from Ukraine weakened Washington’s ability to work with developing nations around the world.

The U.S. has set an example for countries seeking to build institutions and fight corruption, Yovanovitch said — but her ouster showed that enemies in Ukraine could exploit American officials to get rid of someone they disliked.

“How could our system fail like this? How is it that foreign corrupt interests could manipulate our government?” she asked.

Yovanovitch acknowledged that Trump has the power to appoint and remove diplomats as he pleases, but she argued that if an American representative can be “kneecapped” for political reasons, it dilutes U.S. power.

“Shady interests the world over have learned how little it takes to remove an American ambassador who does not give them what they want,” Yovanovitch said.

Although some State Department officials have said they objected to what they saw happening, Secretary of State Mike Pompeo agreed to end Yovanovitch’s tenure early and spurned requests to defend her in public, witnesses have said.

Pompeo’s adviser, Michael McKinley, faulted what he called Pompeo’s willingness to sell out a career diplomat and resigned.

Yovanovitch said Friday that she lamented that Pompeo has declined to acknowledge that attacks on the foreign service are “dangerously wrong” and impair America’s ability to work its will overseas.

She also was asked what she made of the account released by the White House in which Trump is described as telling Ukraine’s president that “things were going to happen to her.”

“I saw it as a threat,” Yovanovitch said.

Case for the defense

Republicans emphasized Yovanovitch’s tangential involvement in the central narrative and repeated that Trump has broad powers to replace any ambassador — and many other officials — within the administration.

Nunes said he didn’t have many questions and he asked, rhetorically, why Yovanovitch was even before the committee. These impeachment proceedings are about pure political animus toward Trump, he said.

Nunes mocked Democrats’ desire to “fulfill their Watergate fantasies” and called the first hearing, on Wednesday, a “farce” based on hearsay and “rumors.”

Mulvaney earlier argued that the impeachment case boils down to complaints by the foreign policy establishment about Trump.

But the administration works for the president, foreign policy is necessarily political, and, Mulvaney said, critics need to “get over it.”

Republican counsel Steve Castor also underscored with Yovanovitch, as he did with earlier witnesses, that corruption in Ukraine remains a real problem and that at least one big case involving the gas company Burisma was resolved.

That company added to its board the son of then-Vice President Biden; Trump sought an investigation into the Biden family, and his defenders have sought to draw attention to that aspect of the story.

The Bidens haven’t been accused of breaking the law, but Trump and others continue to raise questions about Hunter Biden’s payments by the Ukrainian company.

Rep. John Ratcliffe, R-Texas, asked Yovanovitch whether she agreed that Hunter Biden’s tenure on the Ukrainian company’s board might have created the appearance of a conflict of interest; she said she thought it may have.

Also Friday, investigators were to hear behind closed doors from foreign service official David Holmes, a comparative newcomer in the Ukraine drama who could prove an important witness.

Holmes is understood to have been with a top diplomat, Ambassador Gordon Sondland, at a restaurant when Sondland got a call from Trump on his cellphone.

Holmes overheard Trump on that call ask Sondland about investigations he expected from Ukraine, according to testimony on Wednesday by another diplomat, Ambassador William Taylor.

Investigators want to hear from Holmes directly, and another question in the Ukraine affair is whether he might appear and tell his story in a public hearing.

The Associated ress reported that a second State Department staffer also was with Holmes and Sondland on the day of Trump’s call, but details about that hadn’t been confirmed by the Intelligence Committee and it wasn’t clear when or if investigators might hear from that person — or when the public might.