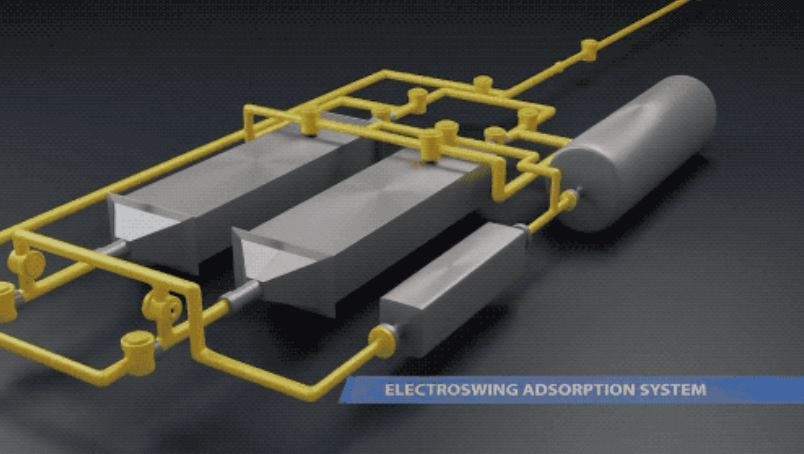 Renewable energy alone is not enough to turn the tide of the climate crisis. Despite the rapid expansion of wind, solar and other clean energy technologies, human behavior and consumption are flooding our skies with too much carbon, and simply supplanting fossil fuels won’t stop global warming. To make some realistic attempt at preventing a grim future, humans need to be able to physically remove carbon from the air.

That’s why carbon capture technology is slowly being integrated into energy and industrial facilities across the globe. Typically set up to collect carbon from an exhaust stream, this technology sops up greenhouse gases before they spread into Earth’s airways. But those industrial practices work because these factories produce gas pollutants like carbon dioxide and methane at high concentrations. Carbon capture can’t draw CO2 from regular open air, where the concentration of this prominent pollutant is too diffuse.

Moreover, the energy sector’s transition toward decarbonization is moving too slowly. It will take years — likely decades — before the world’s hundreds of CO2-emitting industrial plants adopt capture technology. Humans have pumped about 2,000 gigatonnes — billions of metric tons — of carbon dioxide into the air since industrialization, and there will be more.

But what if you could have a personal-sized carbon capture machine on your car, commercial airplane or solar-powered home? 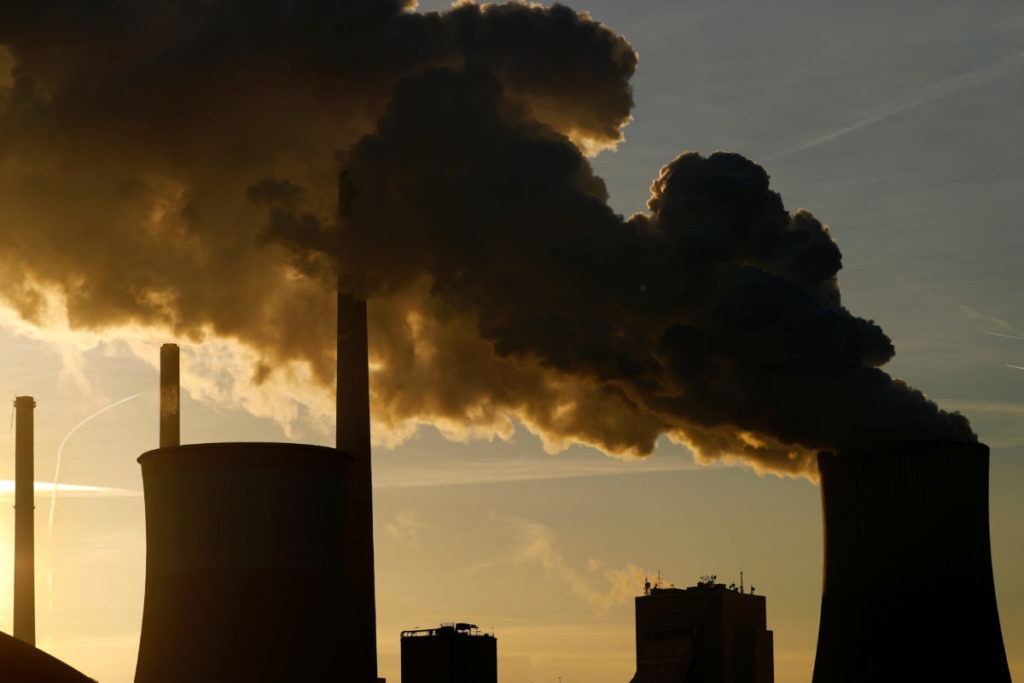 Chemical engineers at the Massachusetts Institute of Technology have created a new device that can remove carbon dioxide from the air at any concentration. Published in <href=”#!divabstract”>October in the journal Energy & Environmental Science, the project is the latest bid to directly capture CO2 emissions and keep them from accelerating and worsening future climate disasters.

Think of the invention as a quasi-battery, in terms of its shape, its construction and how it works to collect carbon dioxide. You pump electricity into the battery, and while the device stores this charge, a chemical reaction occurs that absorbs CO2 from the surrounding atmosphere — a process known as direct air capture. The CO2 can be extracted by discharging the battery, releasing the gas, so the CO2 then can be pumped into the ground. The researchers describe this back-and-forth as electroswing adsorption.

“I realized there was a gap in the spectrum of solutions,” said Sahag Voskian, who co-led the project with fellow MIT chemical engineer T. Alan Hatton. “Many current systems, for instance, are very bulky and can only be used for large-scale power plants or industrial applications.”

Relative to current technology, this electroswing adsorber could be retrofitted onto smaller, mobile sources of emissions like autos and planes, the study states. Voskian also pictures the battery being scaled to plug into power plants powered by renewables, such as wind farms and solar fields, which are known to create more energy than they can store. Rather than lose this power, these renewable plants could set up a side hustle where their excess energy is used to capture carbon.

“That’s one of the nice aspects of this technology — is that direct linkage with renewables,” said Jennifer Wilcox, a chemical engineer at Worcester Polytechnic Institute, who was not involved in the study.

The advantage of an electricity-based system for carbon capture is that it scales linearly. If you need 10 times more capacity, you simply build 10 times more of these “electroswing batteries” and stack them, Voskian said.

He estimates that if you cover a football field with these devices in stacks that are tens of feet high, they could remove about 200,000 to 400,000 metric tons of CO2 a year. Build another 100,000 of these fields, and they could bring carbon dioxide in the atmosphere back to preindustrial levels within 40 years.

One hundred thousand installations sounds like a lot, but keep in mind that these devices can be built to any size and run off the excess electricity created by renewables like wind and solar, which at the moment cannot be easily stored. Imagine turning the more than 2 million U.S. homes with rooftop solar into mini-carbon capture plants.

On paper, this invention sounds like a game changer. But it has a number of feasibility hurdles to surmount before it leaves the laboratory.

How This Electroswing Battery Works

The idea of using electricity to trigger a chemical reaction — electrochemistry — as a means for capturing carbon dioxide isn’t new. It has been around for nearly 25 years, in fact.

But Voskian and Hatton have now added two special materials into the equation: quinone and carbon nanotubes.

A carbon nanotube is a human-made atom-sized cylinder — a sheet of carbon molecules spread into a single layer and wrapped up like a tube. Aside from being more than 100 times stronger than stainless steel or titanium, carbon nanotubes are excellent conductors of electricity, making them sturdy building blocks for electrified equipment. 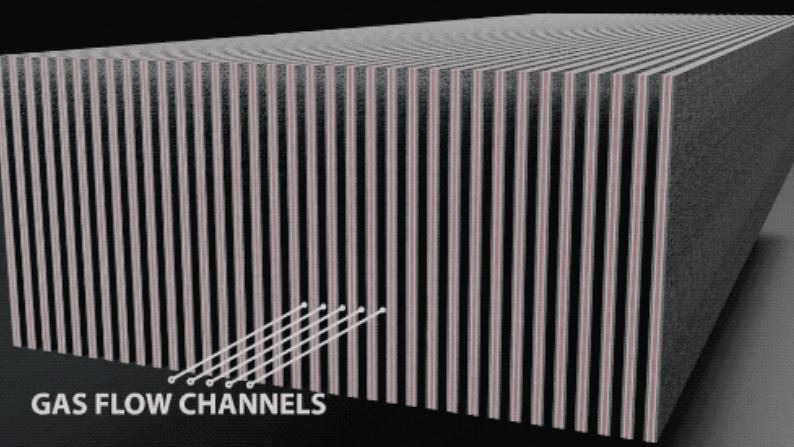 The electroswing adsorbers can be stacked, so air can flow between them. Image by Sahag Voskian

“You can think of it like the charge and discharge of a battery,” Voskian said. “When you charge the battery, you have carbon capture. When you discharge it, you release the carbon that you captured.”

Their approach is unique because all the energy required for their direct air capture comes from electricity. The three major startups in this emerging space — Climeworks, Global Thermostat and Carbon Engineering — rely on a mixture of electric and thermal (heat) energy, Wilcox said, with thermal energy being the dominant factor.

For power plants and industrial facilities, that excess heat — or waste heat, a byproduct of their everyday work, isn’t a perfect fit for carbon capture. Waste heat isn’t very consistent. Imagine standing next to a fire — its warmth changes as the flames flit about.

This heat can come from carbon-friendly options — such as a hydrothermal plant — but some current startups are preparing their capture systems to run on thermal energy from fossil-fuel burning facilities. So they may capture 1.5 tons of CO2, but they also generate about a half ton in the process

In Voskian’s operation, “We don’t have any of that. We have full control over the energetics of our process,” he said.

Voskian and Hatton, who have launched a startup called Verdox, write in their study that operating electroswing carbon capture would cost between $50 to $100 per metric ton of CO2.

“If it’s true, that’s a great breakthrough,” said Richard Newell, president and CEO of Resources for the Future, a nonprofit research organization that develops energy and environmental policy on carbon capture. But, he cautioned, “the distance between showing something in the laboratory and then demonstrating it at a commercial scale is very big.”

The costs for capturing carbon and storing it (or sequestration) typically fall into three bins: the price of physically capturing the gas, the price of transporting the CO2 to a disposal site and the price of burying it in the ground.

Direct air capture is the most expensive form of sequestration because CO2 concentrations in the atmosphere are so low. “Recent estimates for direct air capture are in the range of $125 to $325 per ton,” Newell said.

It is cheaper to collect carbon in an industrial setting where the pollution is high. The most optimal locations are natural gas production sites, ethanol plants and ammonia factories, where the costs range from $20 to $30 per metric ton of CO2, Newell said. Head to a power plant or cement maker — where the facilities are bigger — and costs are $50 to $100 per metric ton.

All of this means the costs of Voskian and Hatton’s device would be on par with the cheapest options for carbon sequestration in general, not just among the market for direct air capture.

This price point for electroswing seems sensible but a little surprising, Wilcox said, given carbon nanotubes are two to 10 times more expensive than the base materials for other forms of direct air carbon capture.

She also worries that carbon capture technology for large industrial operations has reached a stage of development where it might be difficult to catch up to and outcompete them. She co-authored a report earlier this year with the National Academy of Sciences that predicts the price of direct air carbon capture will drop over time, but reach a competitive price point of $100 per metric ton of CO2 until the second half of the century, after significant deployment.

“Scale up will take time and learning by doing should help in cost reductions,” Wilcox said, adding that current direct air startups are also solidifying their positions in the market. “Climeworks is at a commercial scale. Global Thermostat and Carbon Engineering are just about there.”

Moreover, she questions the ease at which electroswing scrubbers could be adapted for transportation, contrasting the situation with catalytic converters used by cars to prevent nitrogen oxides (NOx) pollution. An automobile’s catalytic converter reduces NOx emissions by turning the pollutant into non-harmful nitrogen and water vapor.

That strategy won’t work for CO2, given the end goal is burying it. If your car is burning fuel and capturing carbon from the tailpipe, the CO2 would need to be stored in a tank, which would quickly weigh down the vehicle. What would one do with compressed tanks of CO2?

“You’d have to establish a secondary market for taking CO2 tanks off people’s cars,” Wilcox said, which would be difficult given there isn’t much commercial demand for carbon dioxide.

All that said, Wilcox and Newell believe electroswing tech is an interesting new arena for carbon capture. Given nearly 40 billion metric tons of CO2 are still added to the atmosphere each year, any feasible solution for climate mediation deserves deployment, they said.

“We can’t meet our goals by just avoiding CO2. It’s not going to work anymore,” Wilcox said. “We need all hands on deck.”

Nsikan Akpan is the digital science producer for PBS NewsHour and co-creator of the award-winning, NewsHour digital series ScienceScope.