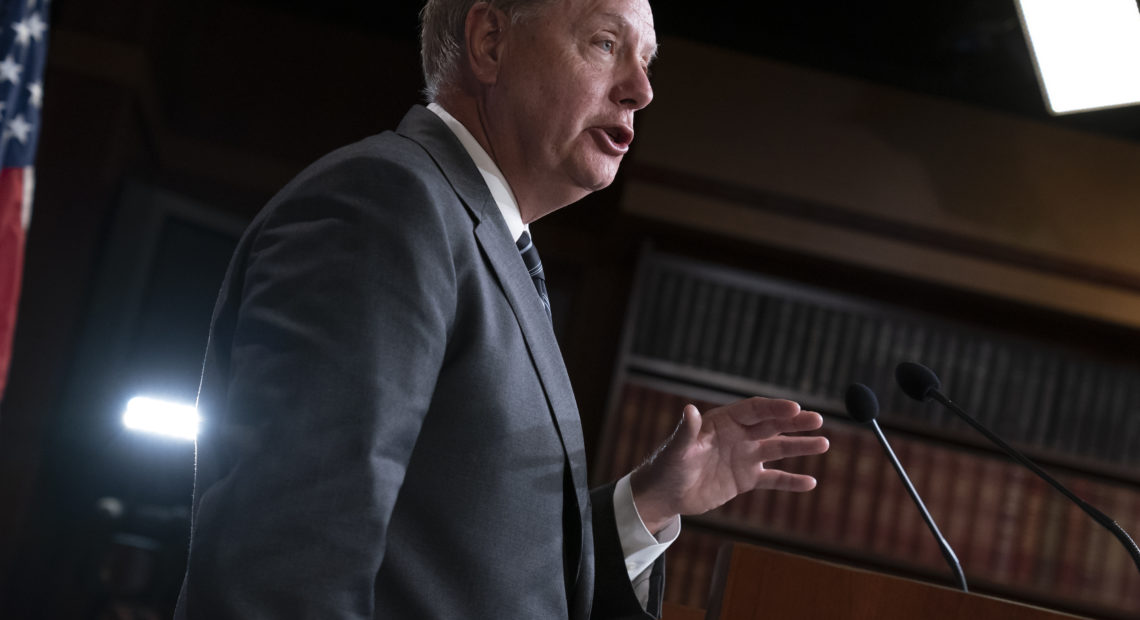 As the House appears to wrap up the investigative phase of its impeachment inquiry, a group of Senate Republicans met Thursday with White House officials, including counsel Pat Cipollone, to map out how a potential trial on articles of impeachment of President Trump could play out in the upper chamber.

During an extended phone interview with Fox & Friends on Friday morning, the president said he would like Rep. Adam Schiff, the chair of the House Intelligence Committee, to be called as a witness. 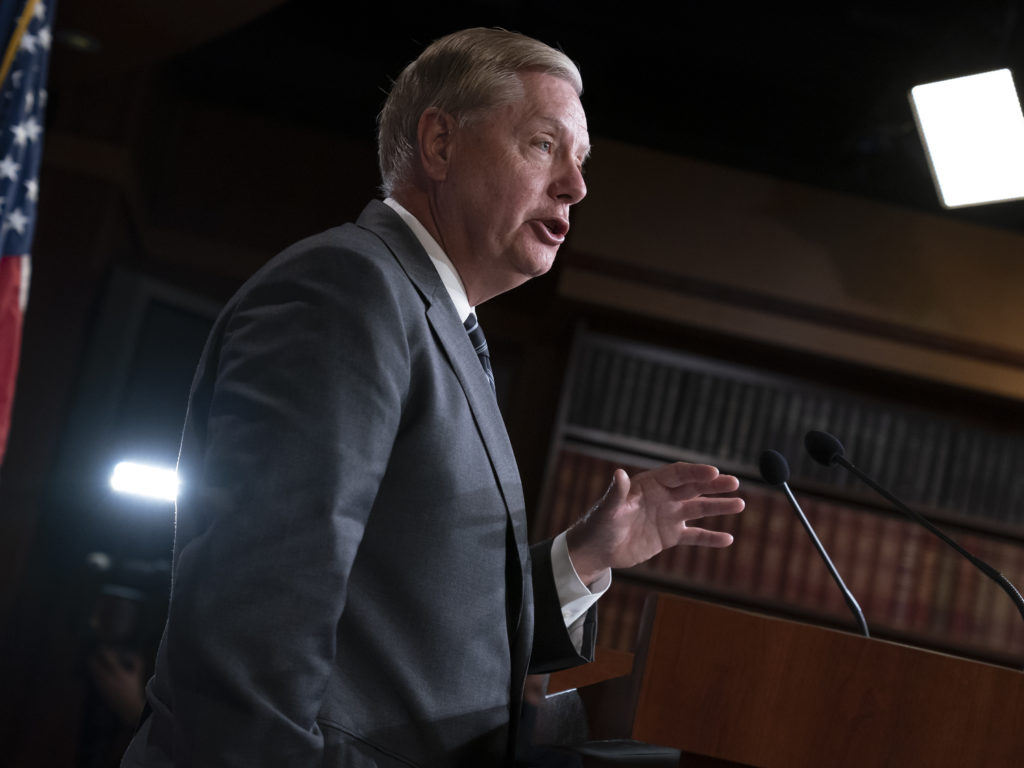 Trump ally Sen. Lindsey Graham shared that White House officials are still holding out hope that the president may not get impeached by the House of Representatives. CREDIT: J. Scott Applewhite/AP

The group discussed how a Senate trial could begin, and how soon it could be dismissed. Separately, a congressional aide confirmed Washington Post reporting that there was also discussion on whether a Senate trial could last just two weeks: “It depends on how long the Democrats want to make their case,” the aide said.

Graham, a key Trump ally and chairman of the Senate Judiciary Committee, told reporters he wanted to make it clear to White House officials that a trial couldn’t be dismissed before it started. He also shared that White House officials are still holding out hope that Trump may not get impeached by the House of Representatives.

“I think they were curious as to like ‘What are you thinking about?’ ” when it comes to a possible Senate trial, Graham said. “They think they’ve got a better than 50/50 (chance) — that maybe this doesn’t happen in the House. But I don’t know … so eventually we’re going to have to cross that Rubicon.”

The Thursday morning meeting was followed by a lunch among Trump and another group of Republican senators, including Mitt Romney of Utah, Shelley Moore Capito of West Virginia, Susan Collins of Maine, Rand Paul of Kentucky and James Lankford of Oklahoma.

The gathering was part of a new, weekly effort by Trump to meet with various groups of Republican senators as the impeachment inquiry picks up steam. The senators said they discussed prescription drugs, proposals to ban flavored vaping products, trade legislation, as well as impeachment.

“I think he’s understandably unable to defend himself,” Capito said of Trump’s impeachment talk. “He feels that whatever has come forward has been exactly what he says, ‘useless,’ so that was basically it. No surprises.”

“Overwhelmingly the meeting was about issues we all raised,” he said, later adding, “The president didn’t say anything new with regards to that topic [impeachment] that I haven’t heard multiple times on TV.”

Speaking to reporters, Graham, who attended the morning meeting with Trump, said he doesn’t want White House officials to believe there’s sufficient ground or enough Senate votes to stop a trial before it even begins. He said such a move, before any evidence is heard, would be inconsistent with what Americans know trials to look like.

“The idea that you would dismiss a trial before they presented a case is a nonstarter,” Graham said. He added, “I don’t want them (White House officials) to believe there’s an ability to dismiss the case before it’s heard … I just think the best thing for the country is to get this done quickly, but it’s got to be done in a way that is acceptable to the body.”

Some Republicans have highlighted the possibility that a senator could move to dismiss the trial through a procedural motion to cut the effort short. The move harks back to West Virginia Democratic Sen. Robert Byrd, who unsuccessfully moved to dismiss the articles of impeachment against President Bill Clinton in 1999.

Graham suggested Trump’s potential Senate trial could begin with a resolution establishing procedures. He referred to own his experience in the Senate during Clinton’s trial, when the upper chamber established those procedures in a unanimous 100-0 vote. But that will be up to the Senate leaders: Majority Leader Mitch McConnell and Minority Leader Chuck Schumer, he noted.

Hopefully, they can work together, he said.

Graham said while the Clinton model is a good one for a potential Trump trial, it doesn’t have to be in terms of timing. Clinton was impeached by the House of Representatives for high crimes and misdemeanors on Dec. 19, 1998, triggering a Senate trial that began Jan. 7, 1999, and ended just over a month later with his acquittal on Feb. 12, 1999. A congressional aide said a Senate trial this time could potentially be as short as two weeks.

Graham also warned that if the White House seeks Senate trial witnesses who weren’t part of the House impeachment inquiry — such as former Vice President Joe Biden, a potential Trump rival in the 2020 presidential election — the trial would be delayed even further.

“They’ll make a request for witnesses, but that would have to be granted by the Senate,” Graham said. And “I don’t know what appetite there is in the Senate by either party to make this a long, drawn-out thing.”

Trump said in his Fox interview on Friday that he would like to see the anonymous whistleblower at the center of the House impeachment inquiry testify in the Senate. The whistleblower called the alarm on a July 25 call between Trump and the Ukrainian president.

That call is at the heart of the Democrat-led impeachment inquiry that is seeking to answer whether Trump sought an investigation into the Bidens from the Ukrainian leader in exchange for the release of military aid and a White House visit. Trump has labeled the call “perfect” and denied any such link was made.