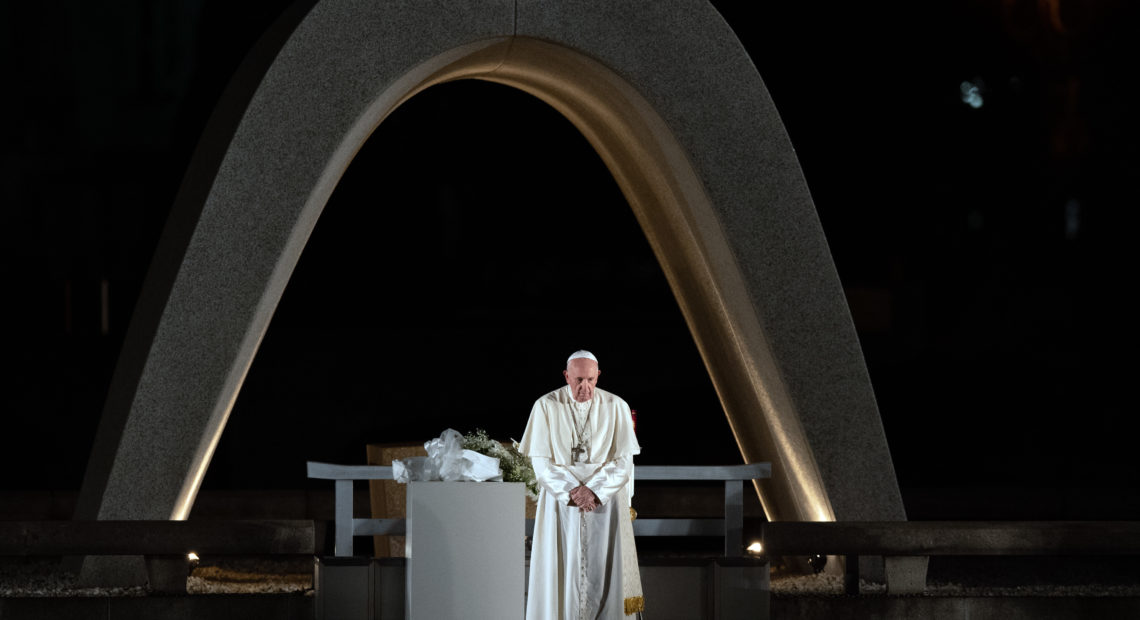 In Visit To Hiroshima, Pope Francis Says Possession Of Nuclear Weapons Is ‘Immoral’

On the first full day of his tour of Japan, Pope Francis visited Hiroshima and Nagasaki and delivered a clear message: possessing or deploying atomic weapons is immoral.

“Peace and international stability are incompatible with attempts to build upon the fear of mutual destruction, or the threat of total annihilation,” Francis said in an address in Nagasaki. He spoke at the site where the United States exploded an atomic bomb in 1945, killing 74,000 people by the end of that year. 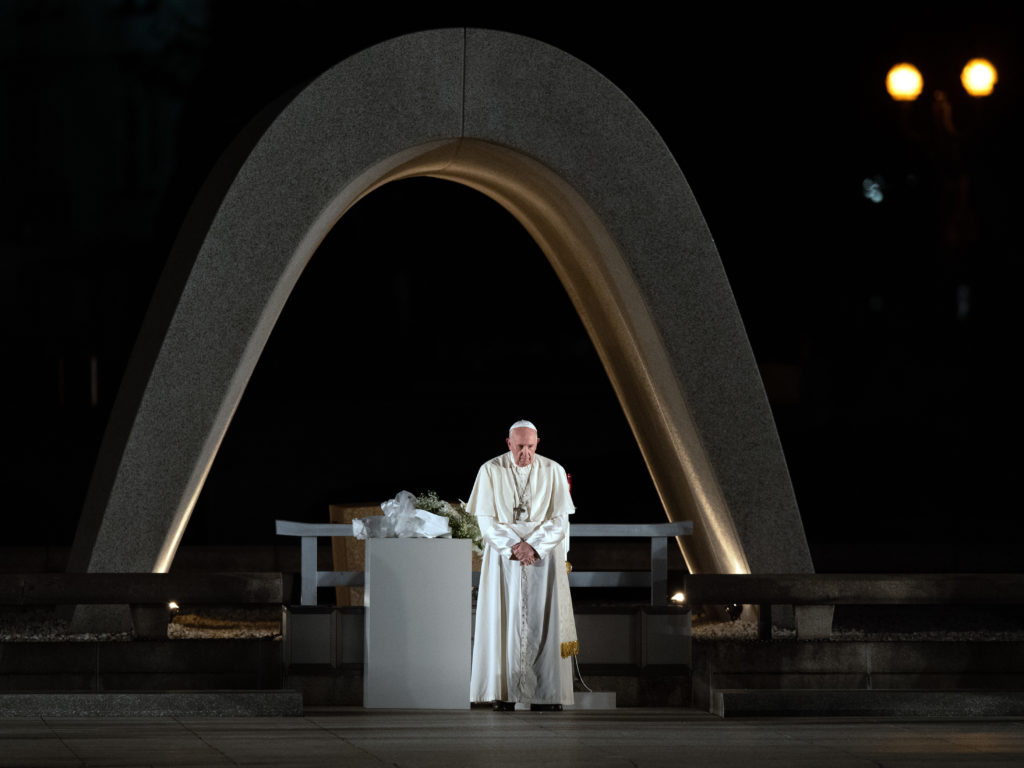 Pope Francis observes a minute of silence in memory of the victims of the atomic bombing of Hiroshima during his visit to the city’s Peace Memorial Park on Sunday, Nov. 24.
CREDIT: Carl Court/Getty Images

The nuclear arms race wastes resources that could instead improve people’s lives and protect the environment, the pontiff said.

“In a world where millions of children and families live in inhumane conditions, the money that is squandered and the fortunes made through the manufacture, upgrading, maintenance and sale of ever more destructive weapons are an affront crying out to heaven,” he said.

Pope Francis then traveled to Hiroshima, where the U.S. dropped the world’s first atomic bomb on August 6, 1945, killing 140,000 people. There, in the darkness, the pope held a meeting for peace.

The remembrances were a somber beginning to the first papal visit to Japan in nearly four decades. The pontiff also performed a mass on Sunday before some 35,000 people at a baseball stadium in Nagasaki.

In Hiroshima, the pope met with survivors of the bombings, including Yoshiko Kajimoto, who was a 14-year-old factory worker when the bomb exploded, causing the building she was in to collapse on top of her.

“No one in this world can imagine such a scene of hell,” she said, describing her evacuation route, according to The Associated Press. “There were more and more people coming by. Their bodies were so burned and totally red. Their faces swollen to double size, their lips hanging loose, with both hands held out with burnt skin hanging from them. They no longer looked human.” 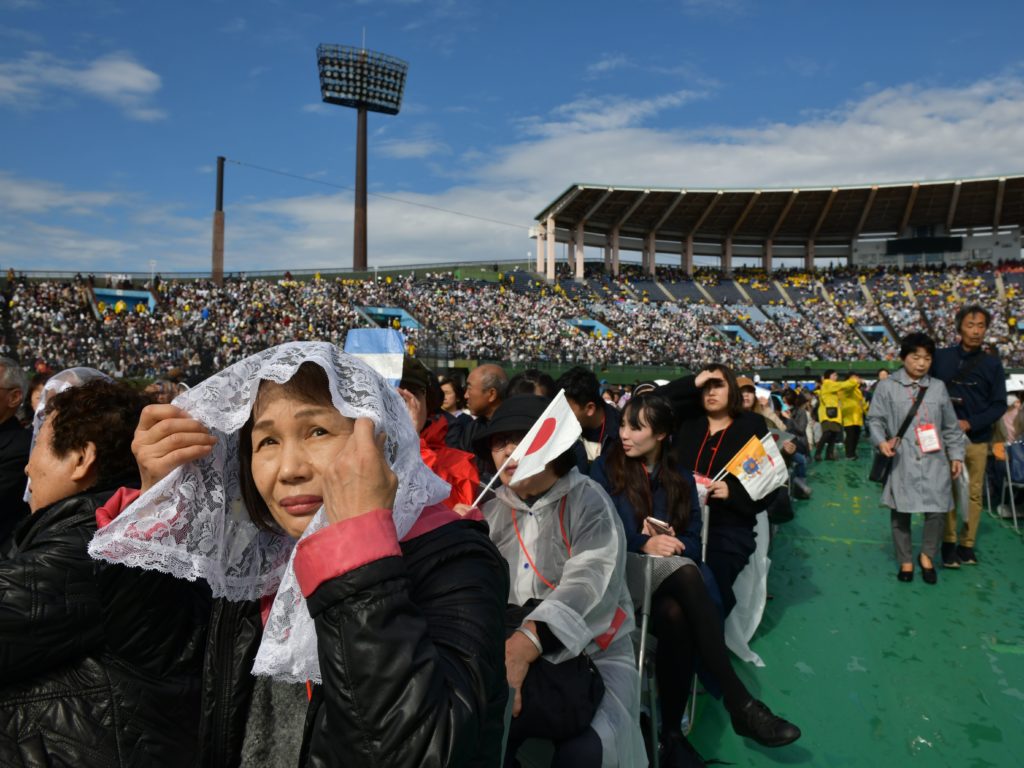 Attendees wait for a Holy Mass led by Pope Francis at a baseball stadium in Nagasaki on Sunday, Nov. 24, 2019. CREDIT: Ed Jones/AFP via Getty Images

Kajimoto’s health has suffered greatly in the years since the bombing. She had most of her stomach removed in 1999 due to cancer, and she n0w has leukemia.

Francis appeared moved by her story, and he reiterated the stance he made on the subject two years ago.

“The use of atomic energy for purposes of war is immoral,” he said Sunday. “As is the possession of atomic weapons.”

His 2017 declaration was a departure from the papacy’s previous position, which held that nuclear deterrence was acceptable if it was in the service of eventual disarmament.

The pontiff specifically lamented the degradation of international arms control treaties. In August, the U.S. pulled out of the Intermediate-Range Nuclear Forces Treaty with Russia, saying Moscow had violated the terms of the agreement.

Amid his prayers, Francis also gave a word of warning: “We will be judged for this.”