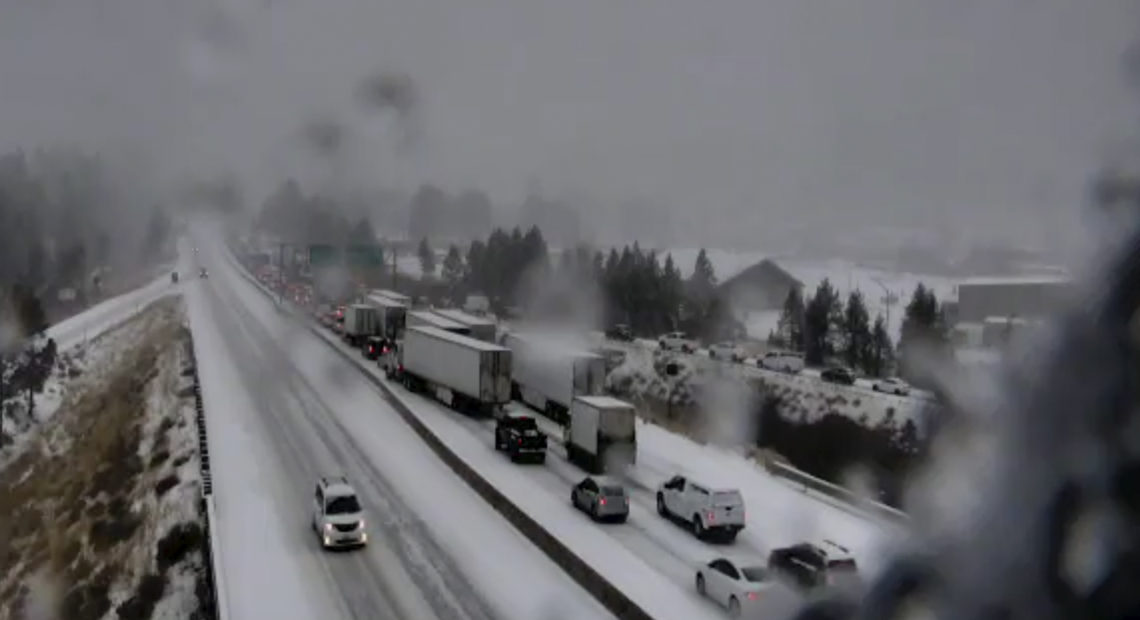 Holiday travelers have just one day until their Thanksgiving buffets — but before many can tuck into drumsticks and potatoes, they can expect to be buffeted by severe weather. The National Weather Service is warning of two big storm systems across the U.S. — one tacking up the Great Lakes and into New England on Wednesday, while the other is already making its presence felt in the West.

Blizzard conditions hit southwestern Oregon and Northern California on Tuesday night, loosed by what meteorologists are calling a “bomb cyclone” — basically, a rapidly intensifying winter storm caused by a precipitous drop in atmospheric pressure. That storm, which the National Weather Service described as “a low pressure record setter for the month of November,” lashed the region with hurricane-force gusts and snowfall up to a foot deep. 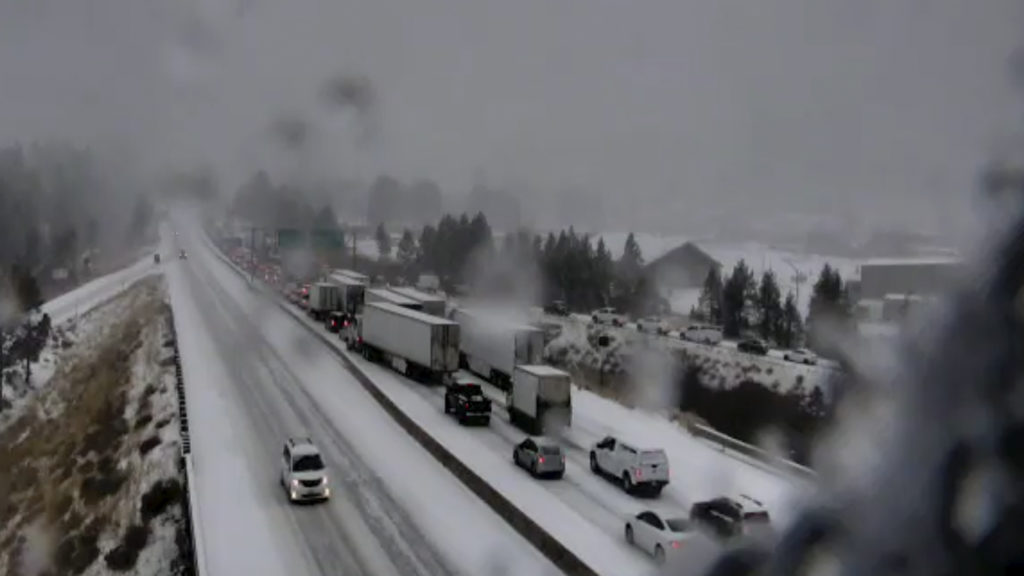 In this still image taken from a Caltrans remote video traffic camera, multiple spinouts bring traffic to a halt Tuesday on Interstate 80 in Truckee, Calif. CREDIT:
Caltrans via AP

Oregon’s Department of Transportation had to close stretches of several highways, and the high winds knocked out power at times for thousands of customers. In Crescent City, Calif., alone, Pacific Power reported more than 4,700 customers affected by outages.

Farther east, in southern Idaho and elevated areas of Nevada and Utah, the National Weather Service’s map is awash in the pink and purple hues of winter storm warnings and advisories. And in Colorado, residents have already reported snowfall totals reaching 3 feet in places from Fort Collins to Denver.

For much of the Midwest and Northeast, the National Weather Service is predicting high winds and heavy snow. In the Twin Cities, more than 8 inches have already fallen outside the airport, and the University of Minnesota’s local campus canceled classes Wednesday. Forecasters expect the storm to reach New England by Wednesday night.

For that reason, authorities are warning folks to avoid traveling if possible — though of course, that’s not likely to stop many people on the eve of the holiday. The trade organization Airlines for America projected nearly 32 million airline passengers to take flights between Nov. 22 and Dec. 3 — a 3.7% increase over last year and an all-time record, according to the group’s calculations.

A number of those passengers could be in for some turbulence. Hundreds of flight delays have been reported Wednesday across the U.S., and several airlines have scrambled to waive change fees to encourage travelers to make other arrangements, particularly when those original arrangements involve Denver International Airport.

Nearly 500 flights were canceled at that airport alone on Tuesday.

“Be creative and help the airline help you, and tell them about any flexibility you have in terms of using alternate airports,” recommended Seth Kaplan, transportation analyst for WBUR’s Here & Now.

“Sometimes,” Kaplan added, “that can make the difference in terms of getting there in time for Thanksgiving or getting home, depending on what happens here with the new storm: just that little bit of extra flexibility that you tell them about.”