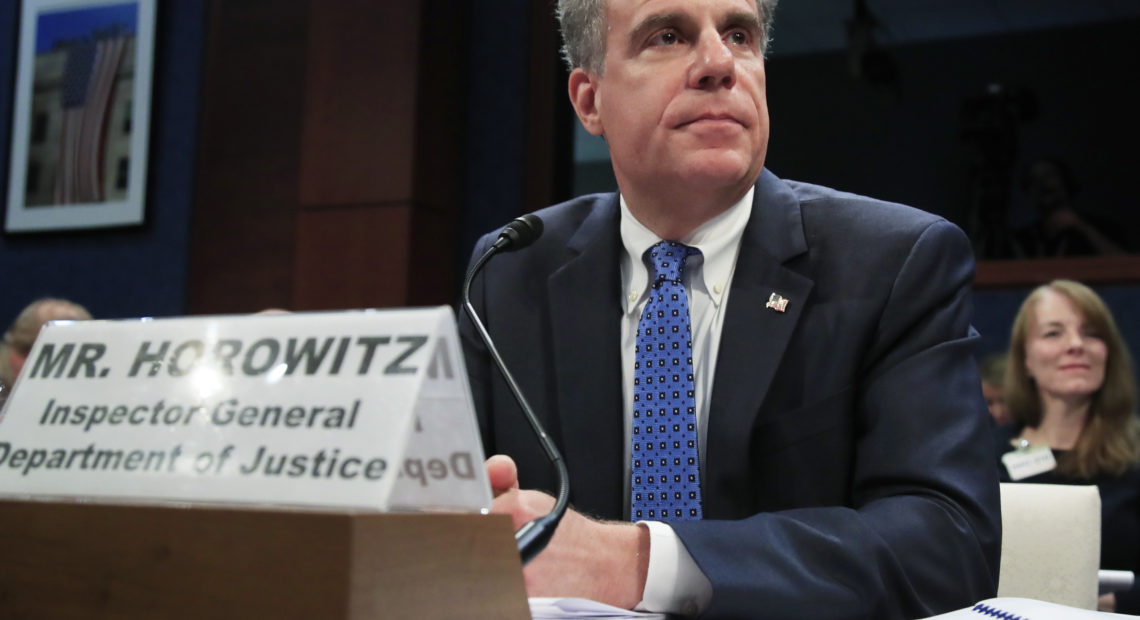 DOJ Watchdog On Russia Probe: No Evidence Of Bias, But Problems With Surveillance

The Justice Department’s internal watchdog determined the FBI had sufficient evidence to open the Russia investigation — but sharply criticized the bureau over its surveillance of a former adviser to the Trump campaign.

In his highly anticipated 400-page report, inspector general Michael Horowitz also says he found no evidence of political bias in the FBI’s decision to launch its investigation into possible ties between the Trump campaign and Russia.

The report, which was released Monday, adds further fuel to the political whirlpool that has agitated Washington since President Trump was elected, including over issues surrounding foreign interference, “bias” and the credibility of investigators and institutions. 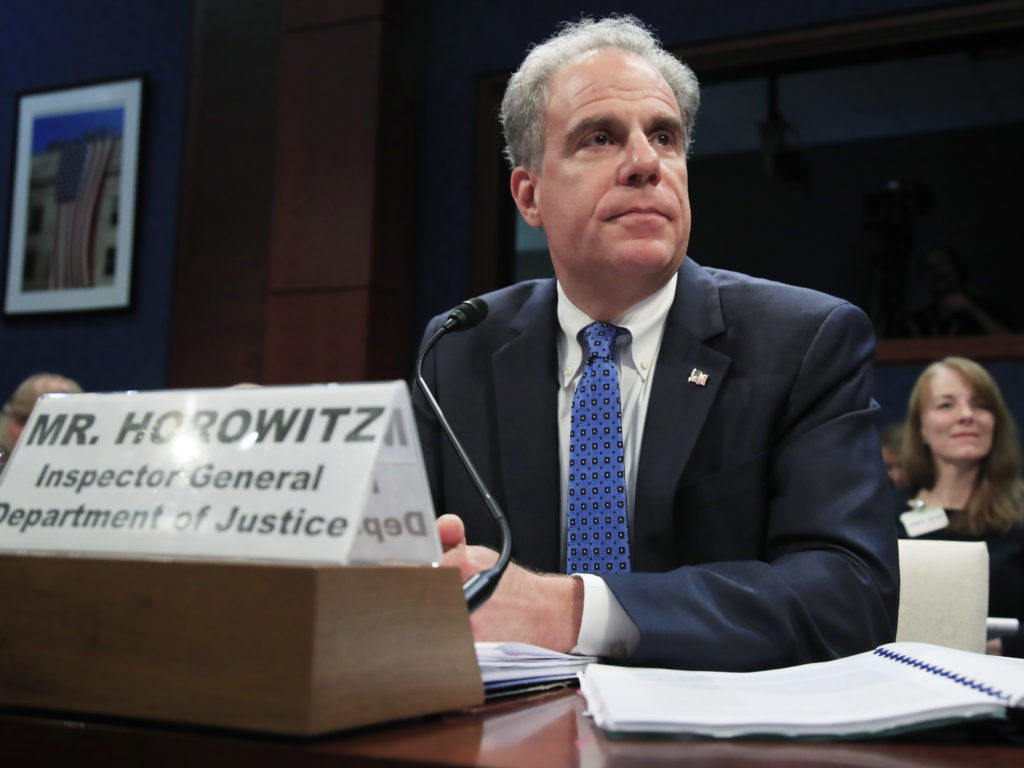 Republicans seized on the finding of flaws and omissions to further their case that the FBI and Justice Department have run amok out of political animus toward Trump. Democrats underscored the overall solidity of the picture about the interference of 2016 and the insights yielded about it by the FBI.

Trump, meanwhile, told reporters on Monday that he believed biased officials had been “caught” in an “attempted overthrow,” although many of the events involved took place before the election.

“It’s a disgrace what’s happened with the things that were done to our country … it’s incredible, far worse than what I ever thought possible,” he said.

Attorney General William Barr cited the findings in a statement on Monday that faulted the Russia investigation and echoed the criticism of federal law enforcement voiced for years by Trump and his supporters.

Barr criticized what he called “an intrusive investigation of a U.S. presidential campaign on the thinnest of suspicions that, in my view, were insufficient to justify the steps taken.”

The Foreign Intelligence Surveillance Act was abused, Barr said, and he called “the explanations given for these actions unsatisfactory.”

Horowitz’s inquiry is not the final word on the Russia investigation. The U.S. attorney for Connecticut, John Durham, was brought in by Barr earlier this year to examine the origins of the investigation, including the actions of U.S. and foreign intelligence services.

Durham issued a rare statement of his own on Monday suggesting that he was reaching different conclusions from Horowitz.

“Based on the evidence collected to date, and while our investigation is ongoing, last month we advised the inspector general that we do not agree with some of the report’s conclusions as to predication and how the FBI case was opened,” he said.

Horowitz launched his inquiry in March 2018 following requests from the Justice Department and lawmakers. In the run-up to that announcement, Trump and many of the president’s allies argued that the Russia investigation was a “witch hunt” to kneecap Trump’s presidency.

Overall, Horowitz’s report found no evidence that the FBI and Justice Department acted with political bias in the broad frame of the Russia investigation.

However, investigators discovered 17 significant errors and omissions in the application for surveillance on Carter Page, who had advised Trump’s 2016 campaign.

Horowitz’s report concluded that the problems with the Page surveillance application represented “serious performance failures” by the FBI and other officials involved.

Attorneys who were supposed to serve as gatekeepers standing between investigators and the Foreign Intelligence Surveillance Court were “unable to make a fully informed decision because information was kept from them.”

The investigators wrote: “Although some of the factual misstatements and omissions were arguably more significant than others, we believe that all of them taken together resulted in FISA applications that made it appear the information supporting probable cause was stronger than was actually the case.”

Problems included omissions about the sources used by the British ex-intelligence officer, Christopher Steele, who wrote the now-infamous Russia dossier; an omission about Page’s relationship with what’s described as “another U.S. government agency” between 2008 and 2013; and the paucity of contact between Page and Trump’s campaign chairman in 2016, Paul Manafort.

Investigators in 2016 sought and obtained a warrant under the Foreign Intelligence Surveillance Act to conduct surveillance on Page. Those warrants were resubmitted and reauthorized into the then-new Trump administration.

Such surveillance is supposed to continue only if a target is engaged in activity that produces usable intelligence, suggesting the FBI was getting such information about Page for a time, but that aspect of the story remains unclear.

Page traveled to Russia twice in 2016 and had been an earlier focus of the FBI in connection with contacts he had with Russian intelligence operatives.

But Page has never been charged and he has maintained all along he’s done nothing wrong.

He has decried what he calls the abuses by investigators of their surveillance powers and become a cause célèbre for critics of the FBI and Justice Department.

FBI Director Christopher Wray said on Monday that the bureau intends to take “more than 40 corrective steps” to address Horowitz’s report, including changes to its surveillance and other practices.

The director also said the bureau might discipline people if it concludes, based on tips from Horowitz’s report, that is warranted.

Democrats embraced the report’s finding that the Russia investigation was predicated on real intelligence and not a “hoax.”

House Judiciary Committee Chairman Jerry Nadler, D-N.Y., and Oversight Committee Chairwoman Carolyn Maloney, D-N.Y., emphasized that Trump and supporters now have no way to claim that the attack on the 2016 election didn’t happen or that the Russia story had been the product of an internal conspiracy.

“The report issued today by the inspector general debunks the conspiracy theories about the Mueller report and the Russia investigation that President Trump and Republicans in Congress have pushed for years,” the Democrats said.

Continued Nadler and Maloney: “Those discredited conspiracy theories were attempts to deflect from the president’s serious and ongoing misconduct, first urging Russia and now extorting Ukraine into interfering with our elections to benefit himself personally and politically.”

The report appeared even as Nadler’s committee had convened another impeachment hearing to review the facts of the Ukraine affair.

Former FBI Director James Comey told NPR on Monday that he welcomed the Horowitz findings — which covered the actions of the bureau during the time Comey was in charge — because they exploded the myths told by Trump and supporters.

The former director said he was pleased that Horowitz had uncovered the problem with the Page FISA application because now, he said, “they can be fixed.”

Overall, Comey said, the report validates what he said he’s always argued about the FBI: “It’s good people working really hard in unprecedented situations,” but it’s a “human institution” that makes mistakes and what the bureau must do now, he said, is “figuring out how we make sure they don’t happen again.”