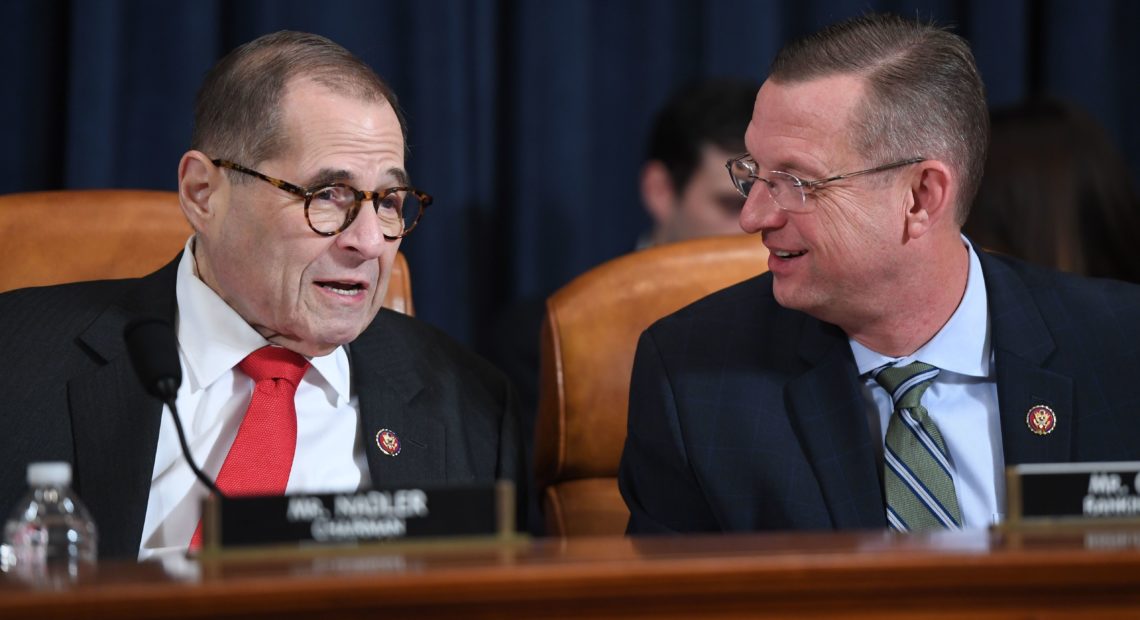 Democrats in the House took the next step toward impeachment on Monday with the presentation of what they call the evidence of President Trump’s improper conduct in the Ukraine affair.

“President Trump’s persistent and continuing effort to coerce a foreign country to help him cheat to win an election is a clear and present danger to our free and fair elections and to our national security,” said Daniel Goldman, the Democratic staff counsel who asked many of the questions during the House Intelligence Committee hearings. 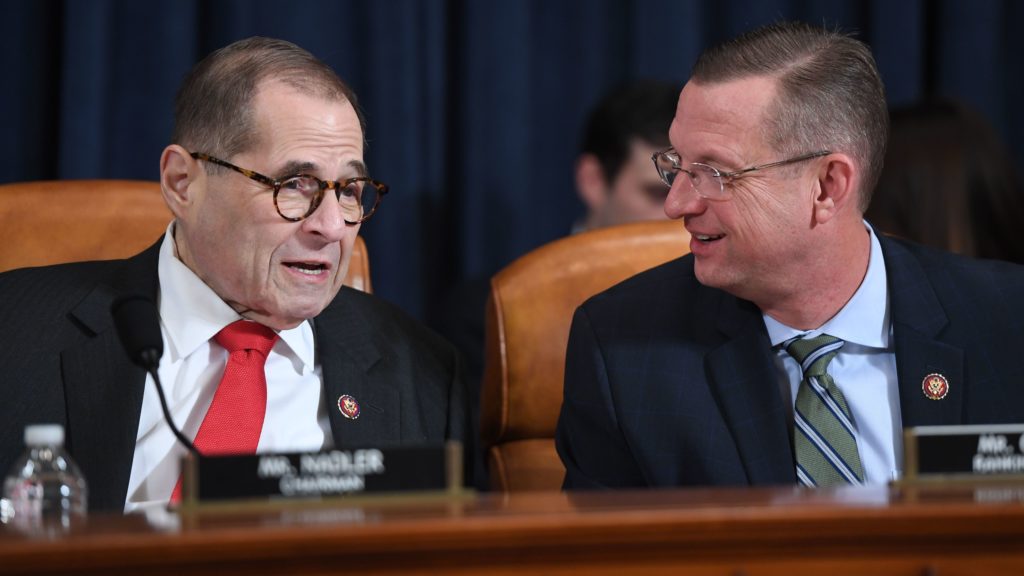 Goldman, a former federal prosecutor for the Southern District of New York, presented evidence congressional investigators had gathered about what he called Trump’s “months-long scheme to solicit foreign help in his 2020 reelection campaign, withholding official acts from the government of Ukraine in order to coerce and secure political interference in our domestic affairs.”

Democrats said they believe the case for taking action is obvious.

“The evidence shows that Donald J. Trump, the president of the United States, has put himself before his country,” House Judiciary Committee Chairman Jerry Nadler of New York said in his opening statement. “He has violated his most basic responsibilities to the people. He has broken his oath.”

Republican ranking member Doug Collins of Georgia argued that Democrats are pursuing impeachment because of a “personal vendetta.”

“They can’t get over the fact that Donald J. Trump is president of the United States,” Collins said, “and they don’t think they have a candidate who can beat [him]. It’s all a show.”

House Speaker Nancy Pelosi, D-Calif., confirmed last week that she and her lieutenants have decided to draft articles of impeachment against President Trump. So now, the Judiciary Committee says it must first receive the Intelligence Committee’s report formally and then assess what charges to prefer.

During the hearing, President Trump asked his Twitter followers to read the account of the phone call he had on July 25 with his Ukrainian counterpart.

“Read the Transcripts!” he wrote.

But interpretation of a July 25 call between Trump and Ukrainian President Volodymyr Zelenskiy is the key to whether what the president did was improper and impeachable.

During that call, according to a call summary released by the White House, Trump asked for a “favor, though” after Zelenskiy mentioned key weapons that Ukraine needs and has been using in its fight against Russia at its eastern border.

Trump proceeded to ask for help investigating two conspiracy theories — one about Ukraine’s involvement in the 2016 election (for which there is no evidence) and a conspiracy theory about former Vice President Joe Biden’s son Hunter’s role on the board of a Ukrainian energy company, Burisma.

Several witnesses, which included senior diplomats and national security officials, testified over the past few weeks that they thought the call was inappropriate, that the request was political and intended to help the president’s reelection and not about corruption writ large in Ukraine.

What’s more, the American public says that what the president did was wrong — 70% in the most recent NPR/PBS NewsHour/Marist poll said it is not acceptable for a president to ask a foreign leader to investigate a political opponent.

The Trump administration was withholding a White House meeting and almost $400 million in military aid, while a pressure campaign was taking place, led by the president’s personal lawyer Rudy Giuliani.

European Union Ambassador Gordon Sondland, who had multiple contacts with Giuliani, the president and Ukrainian officials, testified that there was a “quid pro quo.” He said a White House meeting was being held up until Ukraine announced the investigations Giuliani and President Trump sought. That meeting has never happened.

The aid was eventually released Sept. 11 without explanation.

Republican counsel Stephen Castor, who asked many of the questions during the Intelligence Committee hearings, questioned the strength of Sondland’s testimony. He said Sondland had “no firsthand knowledge” of a direct “quid pro quo” linkage to President Trump.

“He merely presumed there were preconditions,” Castor said.

Castor said Democrats are centering their evidence of wrongdoing on the call summary the White House released with Ukraine’s president. But, he contended, “it is not” evidence of of impeachable conduct. He also called Democrats’ reasoning “baloney.”

Castor was also critical of Democrats’ timeline for impeachment, calling it an “artificial and arbitrary” deadline. On the process, which began in September, he accused Democrats of “fundamentally unfair” tactics, calling the impeachment inquiry a “rushed, take-it-or-leave-it approach.”

Castor later contended that Trump was “not asking for a personal favor” on the phone call with Zelenskiy.

“He was speaking on behalf of the American people,” Castor said.

Beyond the contents of that Trump-Zelenskiy call, Republicans voiced frustration with congressional investigators gathering phone records of key players involved in the pressure campaign. Those records included, perhaps surprisingly, Devin Nunes, the ranking member of the House Intelligence Committee.

Nunes was integral in the questioning of witnesses during the public and private impeachment proceedings and depositions. He strongly made the case for the president and against the Democratic process, in particular.

The records found several contacts between Nunes, Giuliani, and Giuliani associate Lev Parnas, who has been indicted by federal prosecutors for violating bans on straw and foreign donors.

Collins objected to those phone records being included and demanded to know of Goldman who ordered them to be included. He called their inclusion a “gratuitous drive by” and a “smear campaign.”

Rep. Jim Sensenbrenner of Wisconsin went so far as to call it “a clear abuse of power” and that those who issued the subpoenas and released the records “should be ashamed of themselves.” He then added, “The surveillance state can get out of control.”

Goldman declined to get into the details of how the investigation was conducted, but said subpoenaing phone records was standard practice in this type of investigation.

Nadler’s committee will be tasked with writing articles of impeachment against the president that could include abuse of power and bribery, obstruction of Congress and obstruction of justice.

“We’ll bring articles of impeachment presumably before the committee at some point later in the week,” Nadler said Sunday on NBC’s Meet The Press.

Nadler, though, said he had not yet decided which articles to bring. A sticking point among some Democrats is whether to include findings of the Mueller Russia investigation to support an obstruction of justice article.

Republicans led by ranking member Collins have complained all along about the impeachment process and argue that the case about Ukraine not only is meritless, but that Nadler and Democrats have been reckless and sloppy.

The Judiciary Committee would charged with introducing, then amending the articles of impeachment. Then, the committee, controlled by Democrats, would vote on whether to send the articles for a vote of the full House. That is expected before Christmas.

If a majority of the House supports it, that would trigger a Senate trial, likely in January. Republicans control the upper chamber, and they’re expected to acquit Trump. Majority Leader Mitch McConnell, R-Ky., has said he’ll convene a trial as required under the Constitution but that he thinks it’s “inconceivable” that the needed 20 Republicans would break ranks to remove Trump.

Trump, for his own part, has said he hopes the House moves quickly to impeach him in order to set up a Senate trial that Republicans could use for their own political purposes.

The Trump administration has so far declined to participate in the process.