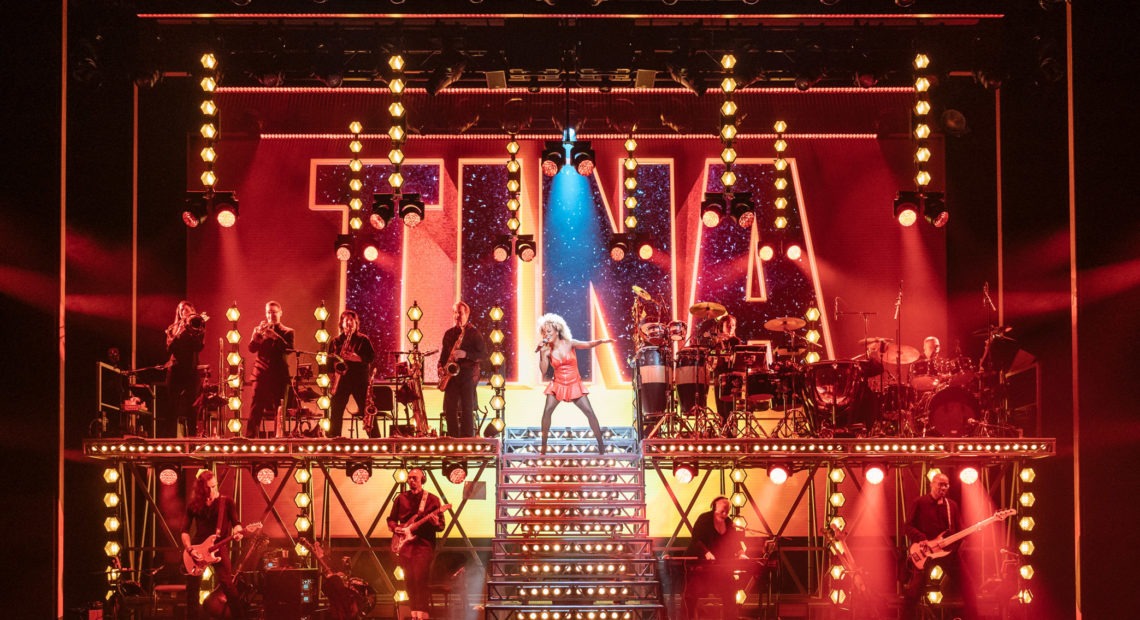 Tina: The Tina Turner Musical tells the rags-to-riches — to rags again, then to riches again — saga of Tina Turner’s life.

It starts in Nutbush, Tenn., where the young Anna Mae Bullock was born. Then it documents her rise to stardom with Ike Turner — who she eventually married and then left after years of abuse — and then her improbable (but somehow entirely fitting) second rise to fame as a solo performer, in her mid-40s no less.

Adrienne Warren plays the adult Tina Turner in Tina, which opened in London and is now on Broadway. It’s a physically demanding role, and Warren is on stage for much of it — from Turner’s teenage years to the 1980s. 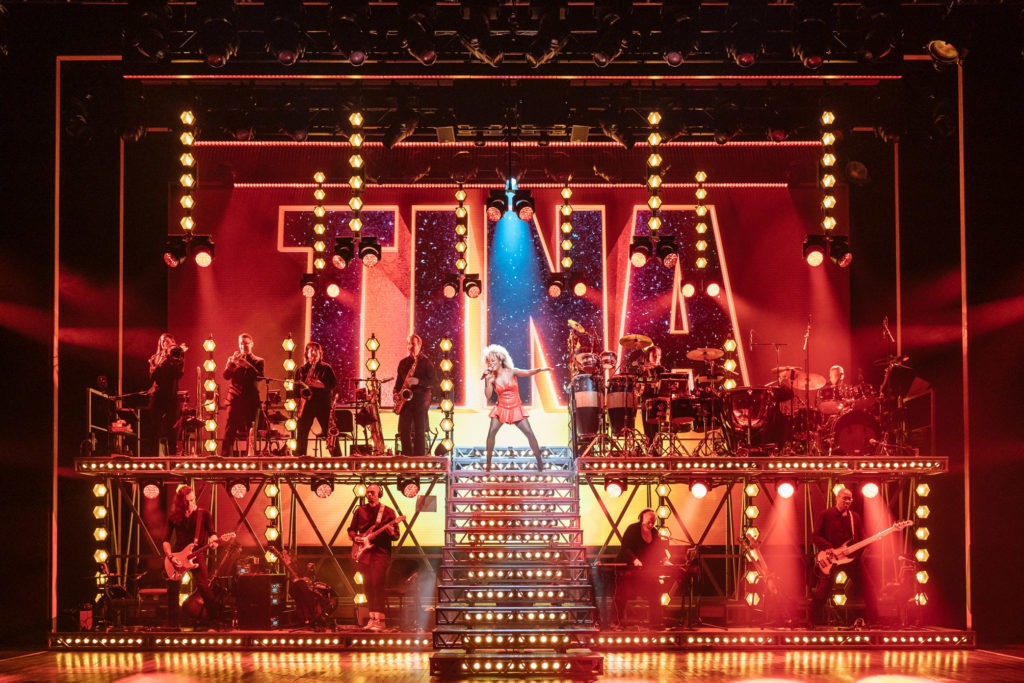 The book for the musical was written by playwright Katori Hall, along with Frank Ketelaar and Kees Prins. Hall wrote the award-winning play The Mountaintop — her imagined account of Martin Luther King Jr.’s final night on earth.

On Adrienne Warren’s initial doubts in taking the role

Warren: Well, yeah, that first time they called me, I thought: “Nahhh, I can’t do that.” I remember my dad even said — my dad is the biggest Tina Turner fan ever, and here I was in [the musical] Shuffle Along playing … a flapper from the ’20s that was singing like a bird, and here I am, someone’s going to let me be Tina Turner: I’m sorry, what? — he said, “I don’t know, champ. I don’t think you can do that one.” …

So it was definitely a challenge for myself that I had to think: “Well, can I do this?” And I just basically just did the best I could.

On the advice that Tina Turner gave Warren

So much advice. One of the great things about this show that doesn’t always happen in these bio-musicals is: She was quite involved in our process. So we had — I had time with her one-on-one where I was able to ask her anything I wanted to ask her: about her as a woman, about her as a performer, about her time with Ike, about her time after Ike. And that was very, very crucial to the development of this performance for me. And I’m so grateful for it, because she is full of so much light and love and so giving — and she didn’t have to be, and she was. And I learned a lot from her. …

First thing — I was like: “How do you do this? How do you be you?” [That was] the first thing I said and you know, she said, “The thing is, there are no shortcuts to hard work.” And she’s right. And I really took that to heart. And I put that in everything — in my training. I trained for about eight months, before I even started the run in London, in boxing and transformed my body and tried to find her voice within my own voice. And I knew I had to give everything — every part of myself into this role in order to do it successfully, and to truly pay homage to her in the way in which she deserves.

Hall: It’s interesting. You know, when I first sat down with Tina, the first thing she said, she was like, “Now, I don’t want no sanitized version of my life, you know. I done been through some things.” And I’m like: “Oh, child. Yes you have.” And so the fact that she is such a transparent person and so grounded — I knew that was going to be my entry point. I feel as though there was no competition with the autobiography. There was no competition with the movie. The fact that I was going to be working with this living icon to re-tell, re-frame and revise her story was just an amazing opportunity for me.

And, you know, another thing I said to her is: I really want people to understand the cultural context, the psychological context … and to answer these big questions that are still haunting her, like: Why? Why did she stay? And so we just had a tremendous time really delving into those hard questions and going through these workshops and refining the script.

On Tina Turner’s changing voice, and how Warren changed her voice for the part

So Nick Skilbeck, our musical director — he and I sat down in rooms over and over again, drilling the beats and drilling the rhythm and what she sings — you know, a certain phrase. And we would just do it over and over and over again. And also, it’s funny, I always joke and I say: I don’t know if Broadway really knows how my voice sounds like. Because at this point … everything that I’ve done, I’ve been using another voice in some way, shape or form. So it’s very interesting, but it’s been a challenge that I’ve been grateful for. And I think I’ve grown so much as a vocalist and a musician because of it.

Hall: You know, [Tina Turner] had a lot of trepidation about showing people the violence, and to put people in the room with it. I think the most beautiful thing about theater is that in it, in that space, we get to tell stories of witness. And if you put an audience in the room with violence, it lands more. You feel the hits. You put yourself in Tina’s position. You are on that floor with her because it is happening right in front of your eyes. And so I think it was extremely important to be very brutally honest about those slaps. And also just about, you know, the financial control, the emotional control …

Obviously, Ike Turner is the villain in the Tina Turner story. And that was actually one of the things that Tina was very interested in. She wanted to reframe Ike. She wanted to give him his humanity. You know, even looking back and having gone through that abuse, even today, there’s this — I wouldn’t say love, but a knowledge and a healing that she’s going through where she wanted to give him the space and the real estate to be seen as a human being.

Now, I don’t want to make excuses for the man. Like, he did some monstrous things. But I was very interested in investigating … the “why.” And so in my reframing of him as a character in her story, I was interested in investigating the fact that he grew up in the Jim Crow South; the fact that he saw his father get beaten within an inch of his life for courting a white woman; the fact that, you know, he had his song, his voice taken away from him. And so that resentment really kind of, you know, folded in on itself. And unfortunately, he decided to displace his anger at himself and his anger at America onto Tina.

On what Warren has learned in telling this story

Warren: Man, when I tell you, I’ve grown up doing this. I’ve been working on this show now since 2016, is the first reading. And I feel like I’ve grown up so much because of this. And I mean, in the sense of, as a performer, as a woman, I — as I told you earlier, I didn’t think I could do this. And to now be on the other side of London, to be on the other side of now opening this show on Broadway — with Tina in the audience with her best friends, Oprah and Gayle [King], and all the people that you could possibly look up to in this world as a young black actress, Whoopi Goldberg, all these people in the audience who I’m looking at watch[ing] me — that has done everything to me.

Because it just shows you there’s no limit to what you can do if you put everything you have into the work. The work is what’s important. And so now I know when I put in that work and I can find that strength within myself just as Tina did. And so that I realize there’s a little bit of Tina in all of us. And that’s the beauty of this show and that’s the beauty of what this process has been for me. I’m so grateful because I’m a much stronger and I’m much more of a warrior of a woman and a being and a performer because of this.

Hall: And that’s what we want audiences to walk out of that theater feeling, like: I can conquer the world. Any demon, any obstacle. And I can slay any dragon.

Gemma Watters and Tinbete Ermyas produced and edited this interview for broadcast. Patrick Jarenwattananon adapted it for the Web.