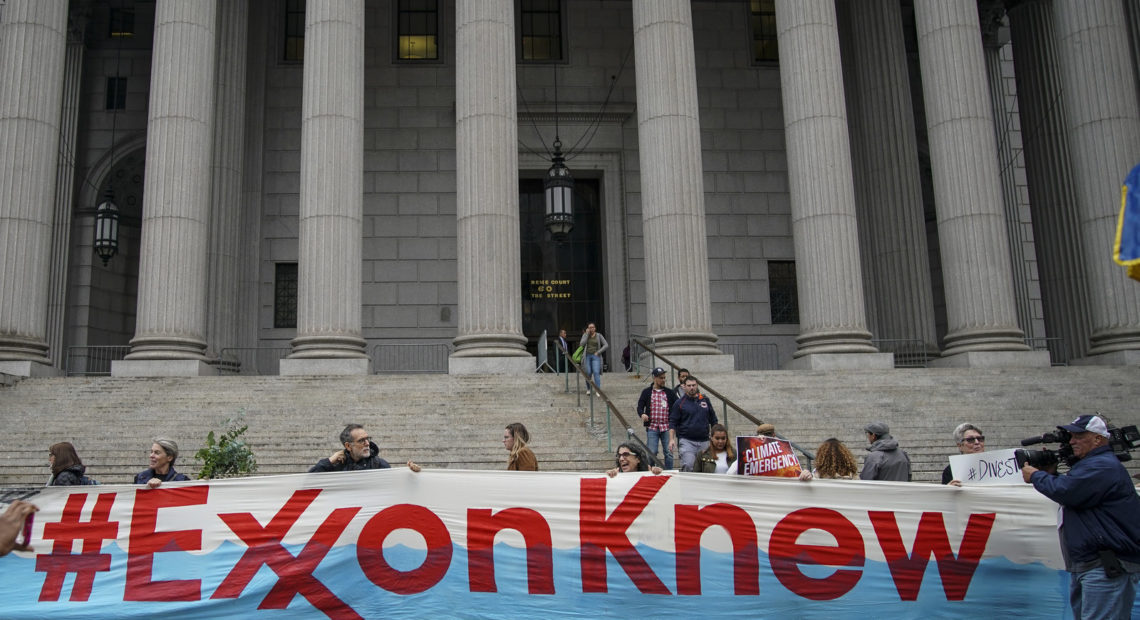 A judge has handed ExxonMobil a victory in only the second climate change lawsuit to reach trial in the United States. The decision was a blow for the New York Attorney General’s Office, which brought the case.

Justice Barry Ostrager of the New York State Supreme Court said that the attorney general failed to prove that the oil giant broke the law.

“Nothing in this opinion is intended to absolve ExxonMobil from responsibility for contributing to climate change through the emission of greenhouse gasses in the production of its fossil fuel products,” Ostranger wrote. But, he added, “this is a securities fraud case, not a climate change case.” 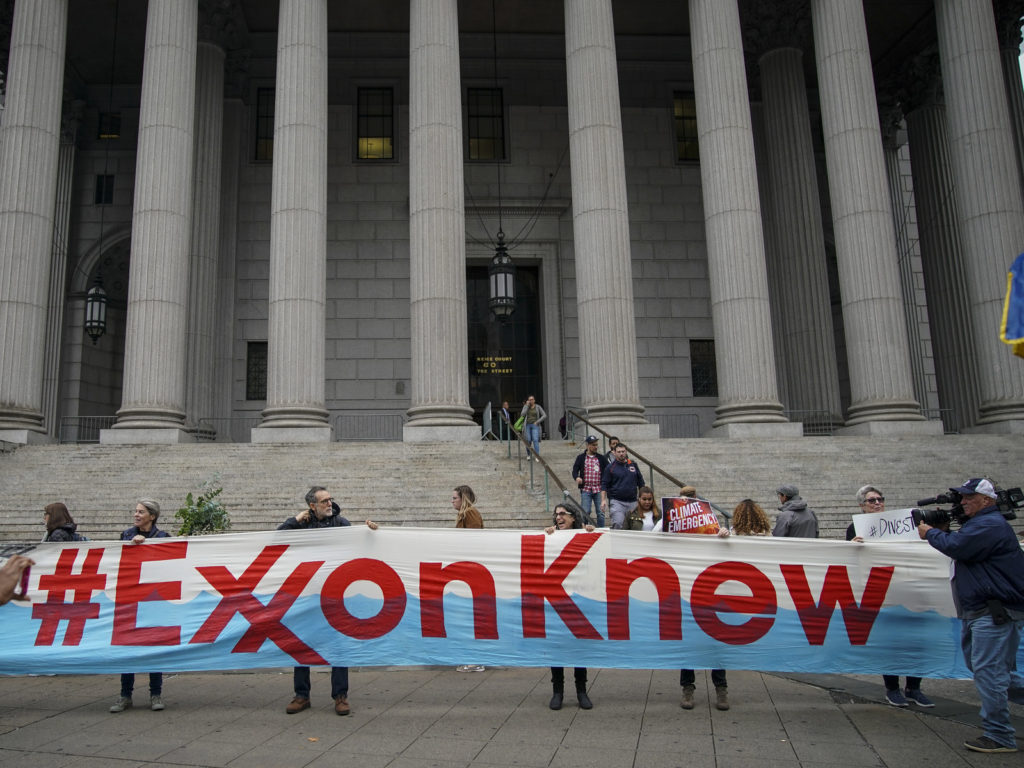 Environmental activists rally outside of New York Supreme Court in October in Manhattan, the first day of the trial accusing ExxonMobil of misleading shareholders about its climate change accounting.
CREDIT: Drew Angerer/Getty Images

In a three-week trial, New York state prosecutors argued that the oil company had downplayed the financial risks it faces from possible climate regulation. Attorney General Letitia James said doing so made Exxon’s assets appear more secure than they really were, which in turn affected its share price and defrauded investors.

Ostrager concluded that James’ office “failed to prove by a preponderance of the evidence that ExxonMobil made any material misrepresentations that ‘would have been viewed by a reasonable investor as having significantly altered the “total mix” of information made available.’ ”

James released a statement following the verdict, saying that the case had compelled Exxon “to answer publicly for their internal decisions that misled investors.”

“Throughout this case, we laid out how Exxon made materially false, misleading, and confusing representations to the American people about the company’s response to climate change regulations,” James said.

“Exxon’s inability to tell the truth further underscores the lies that have been sold to the American public for decades,” she said. “Despite this decision, we will continue to fight to ensure companies are held responsible for actions that undermine and jeopardize the financial health and safety of Americans across our country, and we will continue to fight to end climate change.”

Exxon said the ruling “affirms the position ExxonMobil has held throughout the New York Attorney General’s baseless investigation. We provided our investors with accurate information on the risks of climate change. The court agreed that the Attorney General failed to make a case, even with the extremely low threshold of the Martin Act in its favor.”

“Lawsuits that waste millions of dollars of taxpayer money do nothing to advance meaningful actions that reduce the risks of climate change,” the company said.

There were signs of weakness in the state’s case. On the last day of the trial, the attorney general’s office withdrew two counts of fraud from its lawsuit. Exxon asked the judge to rule on those counts anyway, saying the state had tarnished the company’s reputation in making its case on them.

The state went forward with two counts based on the Martin Act, a New York statute that grants the state’s attorney general the authority to pursue investigations and actions against those it suspects of securities fraud. 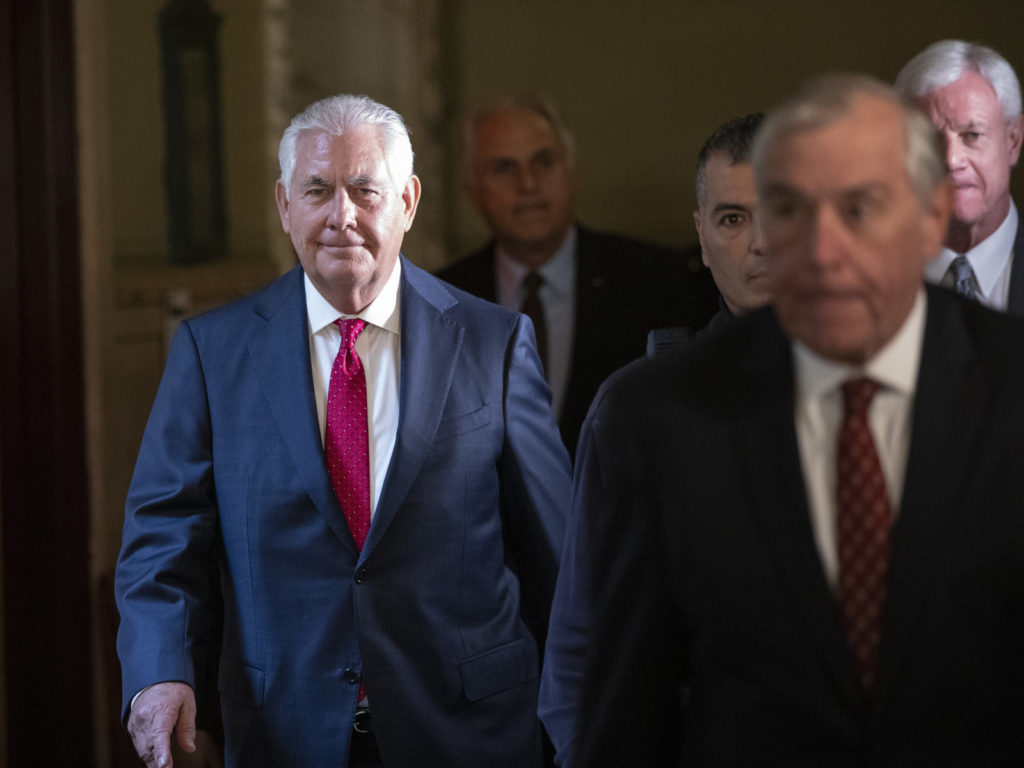 The Martin Act has a lower burden of proof: Prosecutors must show that a company made misrepresentations to investors and that there were consequences.

Ostrager minced no words in describing how he thought the trial had gone: “The testimony of the expert witnesses called by the Office of the Attorney General was eviscerated on cross-examination and by ExxonMobil’s expert witnesses.”

Ostrager said his ruling found Exxon not liable on any of the counts.

The highest-profile witness in the landmark case was former Secretary of State Rex Tillerson, Exxon’s CEO from 2006 to 2017.

Exxon used two ways to estimate the impact of potential climate-change regulations on its future business. Tillerson testified that one assessment was used to estimate the effect of future climate change regulation — such as a carbon tax — on the global energy system. But for specific projects, such as the Alberta oil sands in Canada, the company would use a different way of calculating a “greenhouse gas cost.”

Tillerson insisted that this was appropriate and that Exxon had no incentive to underestimate carbon costs internally, since “we’d be misinforming ourselves.”

Exxon battled for years to prevent this case and others from reaching trial, but there are now numerous pending lawsuits against Exxon and other oil companies, including a similar case that was recently brought in Massachusetts.

In Massachusetts, Attorney General Maura Healey accuses ExxonMobil of systematically misleading investors about climate change’s impact on the economy and its own business, and of deceiving consumers about fossil fuel’s environmental impact.

Elsewhere, many city and state governments are using “public nuisance” arguments to try to hold energy companies accountable for their role in climate change. The idea is to force them to help pay for the mounting impact of climate change that communities now struggle to address.

Fossil fuel companies often attempt to get the cases moved to federal courts, which they believe will be more sympathetic to their side.