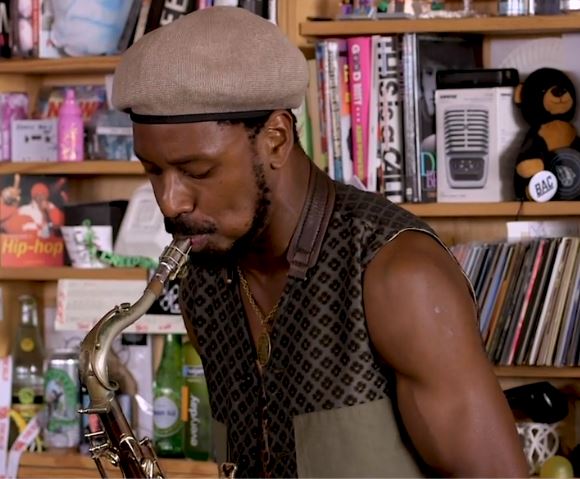 The Comet is Coming is a force of nature. The British trio’s approach to the Tiny Desk was ferocious. Shabaka Hutchings, aka King Shabaka, blew his sax hard while his effects pedal added reverb, expanding not only his sound but altering the office and making it a little eerier.

The set began with a deep drone from keyboardist Dan Leavers, aka Danalogue. It kicked into full gear when he leaped into the air and, on descent, drummer Max Hallett, aka Betamax, whacked the snare drum, setting off a transformative 19-minute concert.

The Comet is Coming is the kind of instrumental jazz trio that takes music lovers out of their comfort zone and into a musical realm they may never have explored. There’s familiarity in these screechy sax/synth/drum dialogues, with the same kind of fuel that fires up Led Zeppelin or Fugazi, for example. Only here, what The Comet is Coming lacks in words, it makes up for in Shabaka’s reedy lyricism, along with electronic textures from Dan Leavers.

These songs are from the band’s second album, Trust in the Lifeforce of the Deep Mystery. This is music for adventure, a thrill-ride that may cleanse your musical palette and alter your taste.