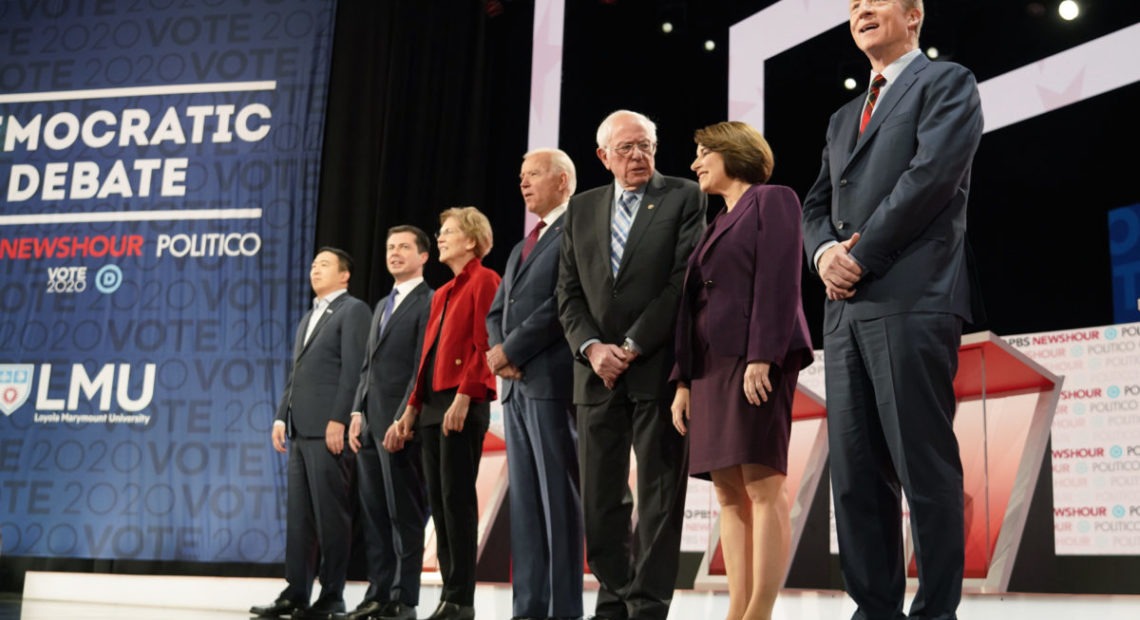 5 Takeaways From The PBS NewsHour Democratic Debate On Thursday

Like the previous five Democratic debates, no one candidate emerged on top Thursday. The same may be true for the primary race overall.

The last debate of the year underscored the divisions in the field — between generations, moderates and progressives, and outsiders versus those with decades of experience in Washington. Former Vice President Joe Biden remains the frontrunner in national polls but with voting kicking off less than two months away, the polls show a tight race in the first two nominating contests, Iowa and New Hampshire.

Here are some takeaways from the debate.

One year in, it’s still a crowded field

At this point, most of the candidates have been in the race since last winter (a few, including Biden, entered the race in the spring or later). They’ve participated in six debates sanctioned by the Democratic National Committee, numerous candidate forums, and held countless town halls, rallies and other campaign events across the country. But as the year comes to a close, primary voters seem as uncertain as ever about which Democrat has the best chance to beat President Donald Trump. 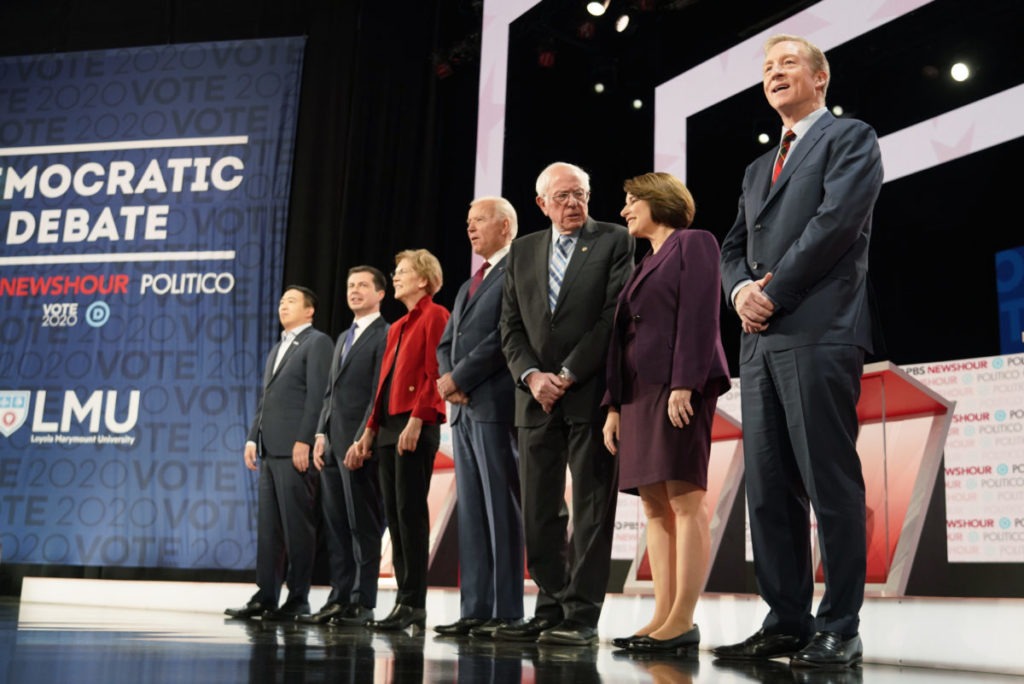 When the year began, primary voters appeared torn on the central issue facing the Democratic Party: whether to shift to the left by embracing a progressive candidate like Sens. Elizabeth Warren or Bernie Sanders, or stick with a centrist like Biden. Biden’s consistent lead in national polls suggests that voters may still be leaning towards a moderate. But the former vice president hasn’t been able to pull away from the field. Sanders and Warren are still very much in the race. South Bend, Indiana Mayor Pete Buttigieg’s rise proves many voters may be searching for a candidate who doesn’t fit neatly into either camp.

The progressive-moderate battle will ultimately be resolved at the ballot box. But as the 2016 Democratic primary race proved, choosing a nominee doesn’t put an end to intraparty fighting. Ideological divides can linger and grow over time. And a divisive primary race can impact the nominee’s chances in a general election. Democrats would arguably be in a stronger position headed into 2020 if there was more consensus on what direction the party should take going forward. Thursday’s debate showed there’s no clarity yet.

A fight over billionaires and wine caves

One of the sharpest exchanges of the night came over the issue of fundraising. It began with Warren criticizing Buttigieg for holding a recent fundraiser with billionaires in what she described as a “wine cave” with “crystals.” Buttigieg dismissed the criticism as an unrealistic “purity test” and noted that he had the lowest net worth of any candidate in the debate. “I’m the only person on this stage who is not a millionaire or billionaire,” he said. Other candidates joined in; Sanders also criticized Biden and Buttigieg for holding large-dollar fundraisers, forcing the former vice president to defend his fundraising efforts.

The argument was one of the first in the debates so far this election cycle where the candidates seemed to go after one another on more personal terms. It might also be a preview of debates to come, once the primaries get under way and the stakes get higher. As it ended, Tom Steyer, the billionaire environmentalist weighed in, saying that sharp disagreements among the Democratic candidates would ultimately hurt the party and help Trump next November.

Biden had some strong moments Thursday in laying out his case as the one to beat Trump and forge bipartisan consensus in Congress.

“I refuse to accept the notion … that we can never, never get to a place where we have cooperation again. If that is the case, we’re dead as a country,” Biden said. “We have to be able to get things done.”

The former vice president delivered a smoother performance on Thursday than he has previously, but he is still not the sharpest debater on the stage.

Yet after a half-dozen debates, it’s become clear that many voters aren’t concerned with Biden’s performances. He entered the race in April as the frontrunner in national polls, and will end the year with a comfortable lead over his closest rivals. He remains the most popular candidate with African Americans — a critical voting bloc in Democratic presidential primaries. By contrast, his opponents have struggled to build diverse coalitions. They trail Biden in South Carolina and Nevada, states with more diverse primary electorates than predominantly white Iowa and New Hampshire.

There are some troubling signs for the former vice president. Biden’s fundraising has not kept pace with the other leading candidates in the race. His initial lead in Iowa and New Hampshire has evaporated. Biden is now third or fourth in most polls in the two key early-voting states. No Democrat has won the nomination without winning one of the first two nominating states. Biden could be the first.

The primary within a primary

From the start, the 2020 Democratic race had a primary within the primary: the fight between Sanders and Warren for the progressive wing of the party. The two senators are among the brightest political stars on the left. The question remains, which one will prevail as the leading progressive?

The answer is still unclear. Sanders was far ahead of Warren in polls earlier in the year. That changed in the fall, after Sanders suffered a heart attack that raised questions about his age and health. Sanders’ health scare coincided with Warren’s surge in early voting states. For a moment, it appeared that Warren was pulling ahead of Sanders for good as the progressive candidate of choice for most voters. But Warren has slid in the polls after facing criticism for her proposal for a phased-in “Medicare for All” plan.

Now, with less than two months to go before voting begins, Warren and Sanders are back where they started: roughly tied in the polls, with their own loyal followings — and unwilling to attack each other on the 2020 campaign trail. At the debate Thursday, Sanders and Warren again refrained from drawing sharp policy distinctions between each other. Neither candidate wants to alienate the other’s supporters in the event that one of them drops out. But as long as both remain in the race, they could continue splitting the progressive vote and open the door for Biden — or another more moderate candidate — to win the nomination.

Buttigieg entered the debate under more pressure than ever before. The South Bend mayor has shot up in some polls in the previous two months. As a leading contender, Buttigieg drew criticism from his rivals including attacks on fundraising from Warren and his lack of experience by Sen. Amy Klobuchar. But Buttigieg rarely lost his cool or went off message. As he has in past debates, the 37-year-old veteran made a compelling case for generational change, arguing that the country was ready for younger leaders and fresh ideas on issues like climate change. “I’ve seen politicians in Washington saying the right things about climate change as long as I’ve been alive” without producing results, Buttigieg said.

The debate capped a remarkable year for a small city mayor who did not have a national profile before launching his presidential campaign. Buttigieg has been a fundraising juggernaut, despite never having run for federal office before. He has a strong operation in several key states, and is poised to make a deep run in the primaries.

Few people in Democratic politics predicted Buttigieg’s success. But in some ways his rise is not all that surprising. Sanders’ strong primary campaign in 2016 signaled many Democrats were eager for an outsider-style candidate. Buttigieg is proof that hasn’t gone away; many voters are clearly attracted to candidates who challenge the party establishment. Andrew Yang, an entrepreneur who is making his first run for public office, offers another example of voter appetite for a nontraditional candidate. Yang qualified for the debate over several sitting U.S. senators running for president who didn’t make the cut.