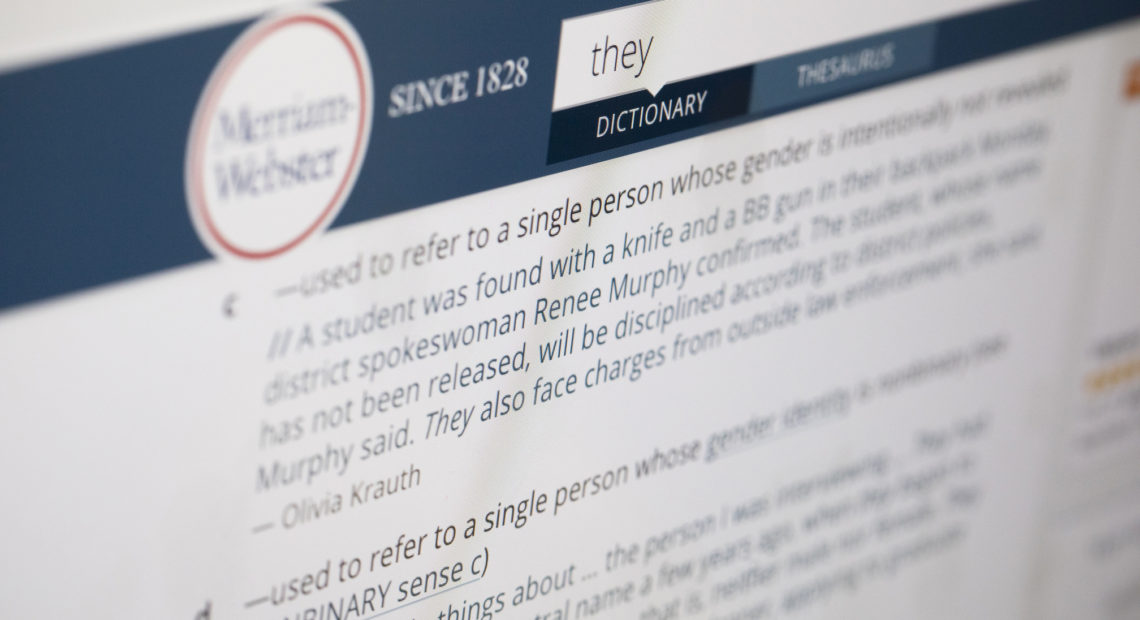 There are plenty of flashpoints for controversy littered among the grand pantheon of four-letter words. Plenty of examples probably come to mind immediately — from the relatively tame (“heck,” anyone?) to the kind of graphic profanity that may warrant an uncomfortable call from our ombudsman.

Still, one four-letter word has elicited more heated debate than most among grammarians lately. And it happens to be one that we’re free to print right here: they.

Merriam-Webster announced Tuesday that the personal pronoun was its 2019 Word of the Year, noting that the tiny, unassuming word had undergone a rather radical transformation in usage in recent years — and found itself at the heart of some wide-ranging cultural conversations in the process. 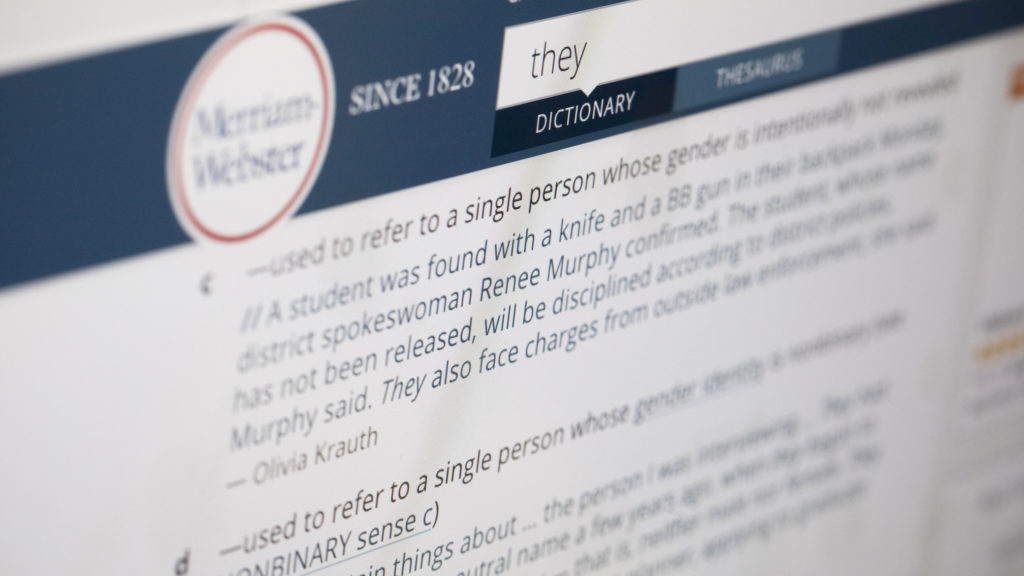 A search for the word they on Merriam-Webster’s website turns up definitions for the personal pronoun, which saw a massive spike in lookups this year over last. Several months ago the dictionary added a definition for its 2019 Word of the Year that classified it as a functioning nonbinary pronoun. CREDIT: Jenny Kane/AP

“English famously lacks a gender-neutral singular pronoun to correspond neatly with singular pronouns like everyone or someone, and as a consequence they has been used for this purpose for over 600 years,” the dictionary publisher explained in a statement.

“More recently, though, they has also been used to refer to one person whose gender identity is nonbinary, a sense that is increasingly common in published, edited text, as well as social media and in daily personal interactions between English speakers.”

In other words, the usual singular pronouns he or she — rooted as they are in a male-female division of gender — can often prove misleading, inaccurate or disrespectful when describing a person who doesn’t identify strictly as a man or woman. Faced with a lack of satisfying singular options, folks have taken to doing what your high school English teacher might have red-penciled 10 years ago: using the typically plural pronoun they to describe just one person.

This is the case not just for pop star Sam Smith, who earlier this year asked to be identified by the gender-neutral they/them “after a lifetime of being at war with my gender.” The gatekeepers of proper grammar and usage have taken notice, as well: Merriam-Webster expanded the word’s definition in September, and the American Psychological Association sanctioned the singular they because it is inclusive “and helps writers avoid making assumptions about gender.”

Even The Associated Press, after years of hanging on to its prohibition of the singular they despite increasing criticism, somewhat reluctantly decided in 2017 to allow reporters and copy editors to use the singular, nonbinary version of the word.

“We stress that it’s usually possible to write around that,” AP Stylebook editor Paula Froke said at the time. “But we offer new advice for two reasons: recognition that the spoken language uses they as singular and we also recognize the need for a pronoun for people who don’t identify as a he or a she.”

Merriam-Webster noted that, this year in particular, curiosity about the word skyrocketed. The publisher noted that in 2019, there was a 313% spike in lookups over last year — which proved to be one of the factors in editors’ decision to name it the Word of the Year.

“People were clearly encountering this new use and turning to the dictionary for clarity and for usage guidance,” senior editor Emily Brewster explained in a statement.

They joins 10 other words and phrases as Merriam-Webster’s words of the year, a list that includes impeach, snitty and even the — another important little word that saw itself thrust into headlines with a rather ambitious (and failed) trademark attempt earlier this year.

It also joins “climate strike,” the phrase Collins Dictionary selected as its own word of the year for 2019.