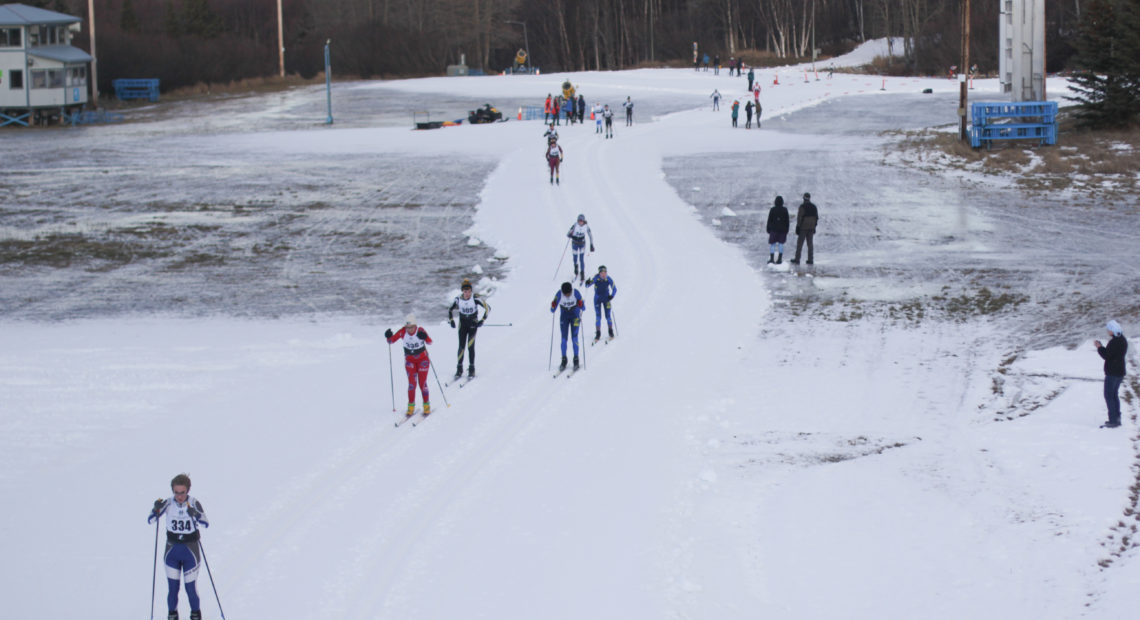 More Ice And Less Snow Gets A Chilly Reception In Anchorage

For many in Anchorage, Alaska, winter and its accompanying outdoor opportunities are something to relish rather than escape.

But as Alaska’s fast-warming climate starts to disrupt typical seasonal patterns, residents of the state’s largest city are being forced to renegotiate their relationship with winters that now seem defined by ice as much as snow.

The Lynx Loppet is a staple event as part of Alaska’s high school cross-country skiing circuit. Teams drive hours to compete at Anchorage’s Kincaid Park, a near-wilderness setting packed with moose and traversed by 30 miles of ski trails. 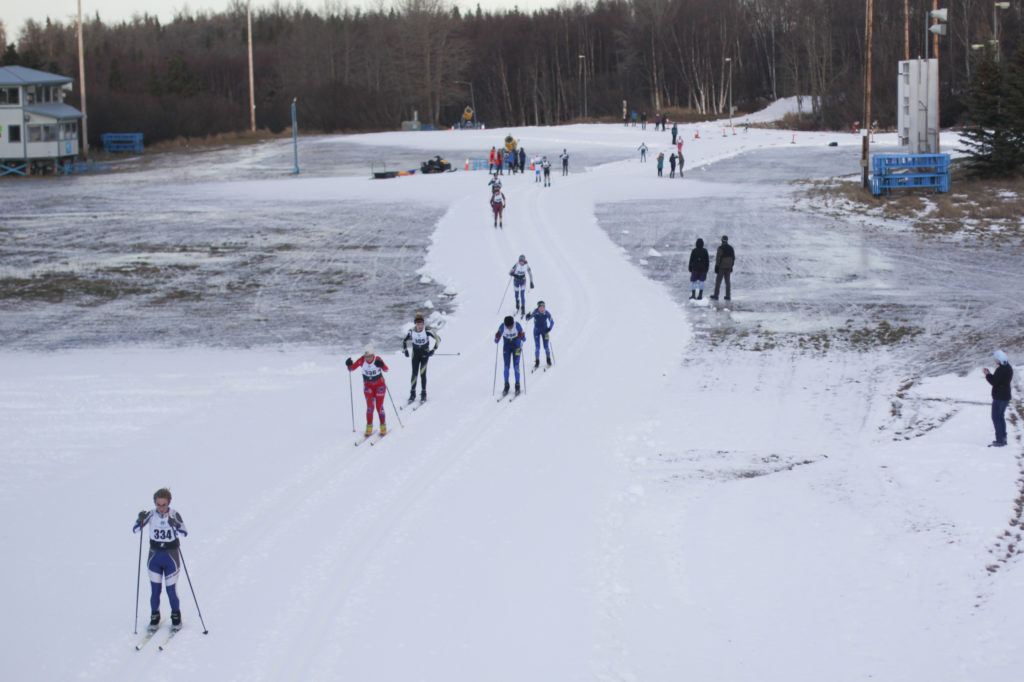 High school skiers compete in the annual Lynx Loppet race at Kincaid Park in Anchorage. The park has 30 miles of trails, but competitors were limited to a mile-long loop of man-made snow. CREDIT: Nat Herz/Alaska’s Energy Desk

Except by mid-December, when the race took place, most of the city’s snow had melted, leaving behind a messy mix of ice and grit. Hundreds of racers took turns skiing around a mile-long loop of man-made snow that one finisher, Max Beiergrohslein, called a “gerbil loop.” He and his teammates warmed up for their race not by skiing but by jogging around bare areas next to the course.

“It’s not the best, going to bed at night thinking, ‘Oh, there’s not going to be snow tomorrow,’ ” Beiergrohslein said after finishing fourth. But, he added: “Normal now is kind of like this: On again, off again, there is snow and then there isn’t.”

An elementary school principal has suggested that students wear helmets at recess, to keep them safe on an icy playground. Anchorage’s street maintenance department recently started using salt, along with sand, to help clear certain roads. And the city council earlier this month voted to shorten, by two weeks, the season in which Anchorage drivers are allowed to use studded tires.

Though temperatures have dipped sharply in the past week, Anchorage is still certain to experience its warmest year on record. And Alaska is warming at twice the rate of the global average, according to last year’s National Climate Assessment, a federal report that dedicated an entire chapter to the state.

Alaska scientists are now researching how much of a change there’s been in what are known as “rain on snow” events, which create ice — and they’ll use that data to predict what might happen in the future. But they already know that it’s staying warmer later into the fall and taking longer for snow to build up.

The first autumn week to average below 25 degrees has pushed 12 days later since the 1950s, from early to mid-November, according to the Alaska Center for Climate Assessment and Policy.

“These kind of poor snow years we would expect, in a warming climate, to become much more common,” said Rick Thoman, an ACCAP climatologist.

One caveat to that idea is that warmer air holds more moisture, which could allow for more snow during the coldest parts of winter. That means Anchorage’s total winter snowfall may not end up being that much less — it just could fall during a more compressed season, Thoman said.

While the changing conditions have made it more challenging, Anchorage residents are still finding ways to preserve their winter-based connections to the outdoors. The city is seeing a boom in winter activities that require less snow, like fat-tire bicycling. Backcountry ice skating, where people traverse ice on remote lakes and creeks, has also become increasingly popular.

“We’re not seeing more people waiting for winter to end so that they can do their summer activities,” said Brian Brettschneider, an Anchorage-based climatologist with the International Arctic Research Center.

“They still want to do their winter activities, because winter is part of the core identity of Alaska,” Brettschneider said.

Less early season snowfall can actually allow thicker ice to form on lakes, according to Brettschneider, since snow, when it does fall, insulates the water from colder temperatures.

“It’s kind of a paradox,” he said. “Our warmest, least-snowy winters tend to be our best backcountry ice skating winters.”

Runners are adjusting, too. Earlier this month at Skinny Raven Sports, a downtown Anchorage running store, John Clark demonstrated how employees drill short, hardened screws into the soles of sneakers — a cheap way to get better traction on icy streets and trails. The store orders 30,000 screws a year, enough for more than 1,000 pairs of shoes.

For customers willing to spend more money, Skinny Raven stocks a dozen different types of shoes and boots with studs already built in, with names like Icebugs and the Spikecross 5.

As Anchorage’s winters have changed, demand for those shoes has increased and the store now sells more than 1,000 a year, up from several hundred a decade ago, Clark said — though he added that some of the increase stems from improvements in the shoes’ technology.

“We’re just trying to find ways to make it easier for people to enjoy the winter,” he said.

This year has been particularly challenging for Anchorage’s cross-country skiers, who saw a record-high snowfall and temperature for the same mid-November day (8.4 inches and 45 degrees), followed by a thaw that left trails largely bare of snow for more than a month. 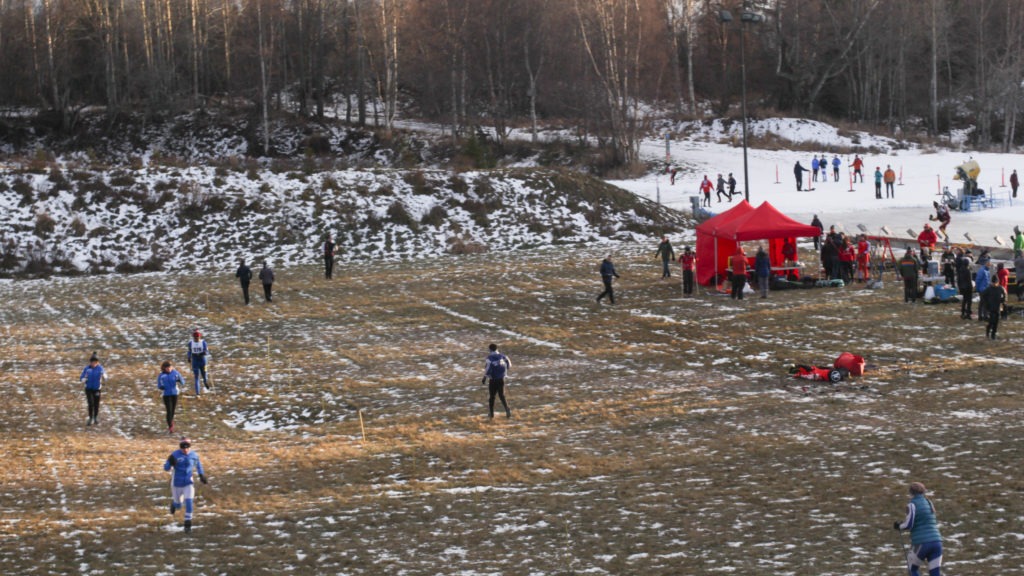 High school skiers warm up for the annual Lynx Loppet race at Kincaid Park. Competitors had to warm up by running with their ski poles. CREDIT: Nat Herz/Alaska’s Energy Desk

Beiergrohslein, the high school skier, lives outside of town, where there’s no man-made snow, so his team has been driving 40 minutes a few days a week to find usable trails at Kincaid Park or in the mountains to the north. They’ve also been running, which is “not fun,” Beiergrohslein said.

But the team is still growing, rather than diminishing, he added.

“When we were first having bad snow years, a lot of people would quit,” Beiergrohslein said. “But now, it’s kind of all they know.”

Not everyone in Anchorage has reached the acceptance phase, however. Brettschneider, the local climatologist, is also an avid winter hiker and ice skater, and he said he’s still hoping that the warming trend can be stemmed. He’s affixed a “make Alaska cold again” slogan to the top of his Twitter page, and said he and his family have taken steps to curb their emissions.

Alaska, he said, is very different from the Lower 48, where people may not be as enthusiastic about cold temperatures or snow.

“We want the cold,” Brettschneider said.

“Everyone wants winter here in Alaska,” he added. “Because if you have enough winters where it’s not really winter, then you’re not going to have Alaska anymore.”