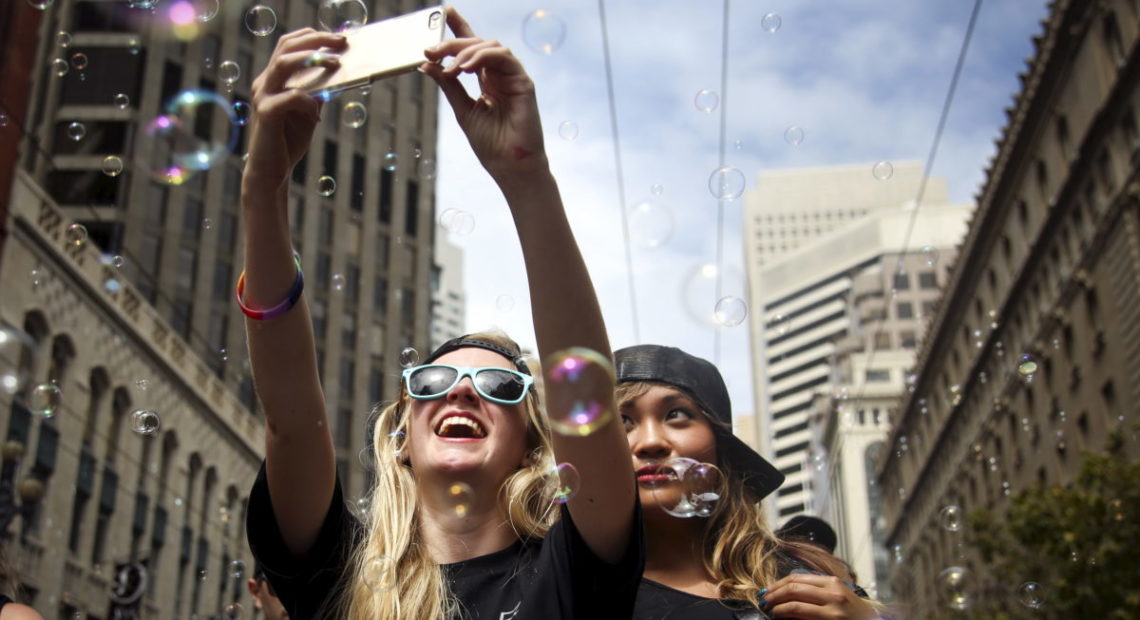 As the decade comes to a close, what’s changed? PBS NewsHour takes a look at the major shifts in social norms, global economies and how technology affects our daily lives.

From smartphones to LBGTQ rights, here are some of the most memorable ways in which the world has changed over the past 10 years.

We became glued to our smartphones

When Apple CEO Steve Jobs introduced the iPhone in 2007, he promised the “revolutionary” device would “reinvent the phone.”

By most measures, he was correct. Around 81 percent of Americans owned smartphones as of this past February, compared with 35 percent in 2011. We use them to find directions, read the news, take pictures and even doing our banking. Oh, and we sometimes use them to talk to each other.

As smartphones became ubiquitous, so did users’ attachment to them. Average smartphone owners spend several hours on their phones each day. 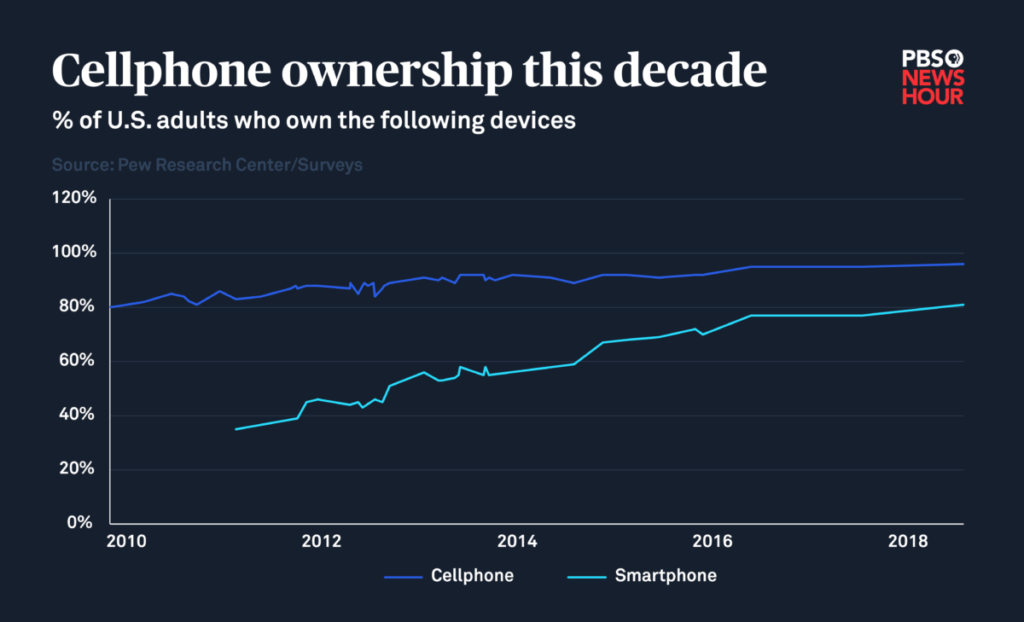 An entire “gig economy” has been built around services that are now available at smartphone users’ fingertips–from transportation to grocery delivery.

But there’s a downside to this convenience: studies suggest that spending too much time on smartphones can cause depression and anxiety, and psychiatrists worry that young people’s dependence on their phones borders on addiction.

Workers employed in the gig economy are likewise feeling the side effects of users’ expectations for on-demand services at low costs. Lyft and Uber drivers went on strike earlier this year to protest low wages and unfair working conditions, and delivery drivers for mobile services such as DoorDash and Postmates have said even small changes to the companies’ algorithms can have a significant impact on their pay.

The advent of streaming put video rental stores such as Blockbuster out of business and propelled media companies such as Disney, AT&T and NBC to cash in on the trend.

We witnessed the organizing power – and danger – of social media

Over the past 10 years, the popularity of existing social media outlets such as Facebook, Twitter, and WhatsApp grew exponentially, and new social media sites, including Instagram, Telegram and TikTok were launched.

Some of those social networking sites have been used to organize anti-government movements around the world. They played an instrumental role during the 2011 Arab Spring, when protesters against authoritarian governments took to Twitter and Facebook to organize calls for new leadership. More recently, they have been used in “leaderless” protests in Hong Kong, Lebanon and Chile.

Although social media has bolstered pro-democracy efforts around the world, it has also proven a threat to democracy. During the 2016 U.S. presidential election, Russia used Facebook and other social media outlets to sow disinformation and discord among voters to boost the candidacy of Donald Trump.

We saw the effects of climate change become very real

Over the past decade, the threat of climate change became more tangible for communities around the world.

In California, “mega wildfires” wiped out entire towns, burning across larger areas than in previous years. Europe suffered through a record-breaking heat wave, and a “blob” of warm ocean water disrupted marine ecosystems off the coast of Alaska.

Multiple studies have shown that climate change makes many natural disasters worse and recently scientists have even been able to link individual storms to climate change.

Polls show most Americans believe that climate change is happening. At the same time, debate about how to address or mitigate its effects is still a partisan issue, pitting the interests of environmental groups against workers in industries such as oil and coal.

Trump has long voiced skepticism about climate change and pedaled misleading claims about the link between the weather forecast and broader issues surrounding global warming. After Trump took office, the U.S. announced it would withdraw from the Paris Climate Accord, an international pledge by more than 200 nations to cut greenhouse gas emissions in hopes of slowing the planet’s warming. That despite the fact that more conservative Republicans—32 percent—are worried about global warming now than in the last decade

Climate skepticism isn’t unique to the U.S. Australian Prime Minister Scott Morrison recently expressed doubt that deadly bushfires affecting his country had any link to global warming, and Brazil’s President Jair Bolsonaro has dismissed international concerns about deforestation and fires in the Amazon, which could worsen climate change.

Despite international efforts, a recent UN report found that countries haven’t acted quickly enough or taken significant enough steps to combat climate change. Carbon emissions now need to be reduced by 7.6 percent each year to avoid the most devastating effects.

The crisis has already caused people to flee their homes and sparked a youth movement led by the likes of Greta Thunberg, who has traveled the world to urge older lawmakers to take more serious action with future generations in mind.

“Politicians make decisions that are expedient for getting through the next few years,” said Philip Duffy, president and executive director of the Woods Hole Research Center, a Massachusetts-based think tank that focuses on climate change.

Duffy said young people are right to be angry.

“If you’re a business tycoon, you think of it in terms of loss,” Duffy said. To young climate change protesters, “taking policy steps to cope with climate change doesn’t represent any kind of loss.”

We bounced back from the recession, but inequality grew

The U.S. economy largely recovered from the 2008 recession over the past decade, with GDP growing steadily and unemployment reaching a 50-year low. Still, a majority of economists recently said in a survey that they expect a recession to occur in 2021, and many Americans remain dissatisfied with the state of the economy.

Gentrification and a shortage of affordable housing has fueled displacement in cities from Washington, D.C., to Portland, and homelessness rose for three years in a row, with states such as California and Idaho struggling to accommodate those affected by the crisis.

One, taken in 2015, showed a three-year-old Syrian boy named Aylan Kurdi, whose body was found washed up on a beach in Turkey. He had drowned after being separated from the rest of his family, which fled the Syrian Civil War and were trying to reach Greece. A similar photo went viral this past summer, showing a father who had drowned alongside his 23-month-old daughter while fleeing El Salvador for the U.S.

The victims in these photos were a few of the hundreds of thousands of people who fled their homes in recent years due to violence and political instability. In Europe, the migration crisis driven by the Syrian Civil War came to a head in 2015, when thousands of migrants were held in camps from Lesbos, Greece to Calais, France. More than 3,000 died trying to cross the Mediterranean that year.

European countries were divided on how to address the issue. While German Chancellor Angela Merkel pledged to welcome more than one million refugees to the country, many asylum-seekers were turned away from other countries such as Hungary, where Prime Minister Victor Orbàn has denounced refugees as “Muslim invaders.”

WATCH: What happened after two Syrian families who made it to Germany

In the U.S., anti-immigrant rhetoric fueled Trump’s ascent to the presidency in 2016, as he promised to “build a wall” to keep out migrants fleeing from Central and South America. More than three years after Trump took office, some parts of the border fencing have been replaced but no new border wall has been built.

There has been substantial backlash, however, over some of Trump’s other immigration policies that were implemented, including a ban on travel from certain majority Muslim countries and the administration’s “zero-tolerance” policy that systematically separated children from their families at the U.S.-Mexico border.

“We are living in an era of skepticism about migration,” said Demetrios Papademetriou, former former president of the non-partisan Migration Policy Institute.

Politicians such as Trump and India’s Prime Minister Narendra Modi, who has been criticized for a citizenship law that is seen as anti-Muslim, “know how to articulate fears and take advantage of them to gain political power,” Papdemetriou said.

We had hard conversations about sex and power

The #MeToo movement first began in 2006, but it gained national and international attention after news articles in 2017 shed light on Hollywood producer Harvey Weinstein’s serial harassment of women in the entertainment industry. 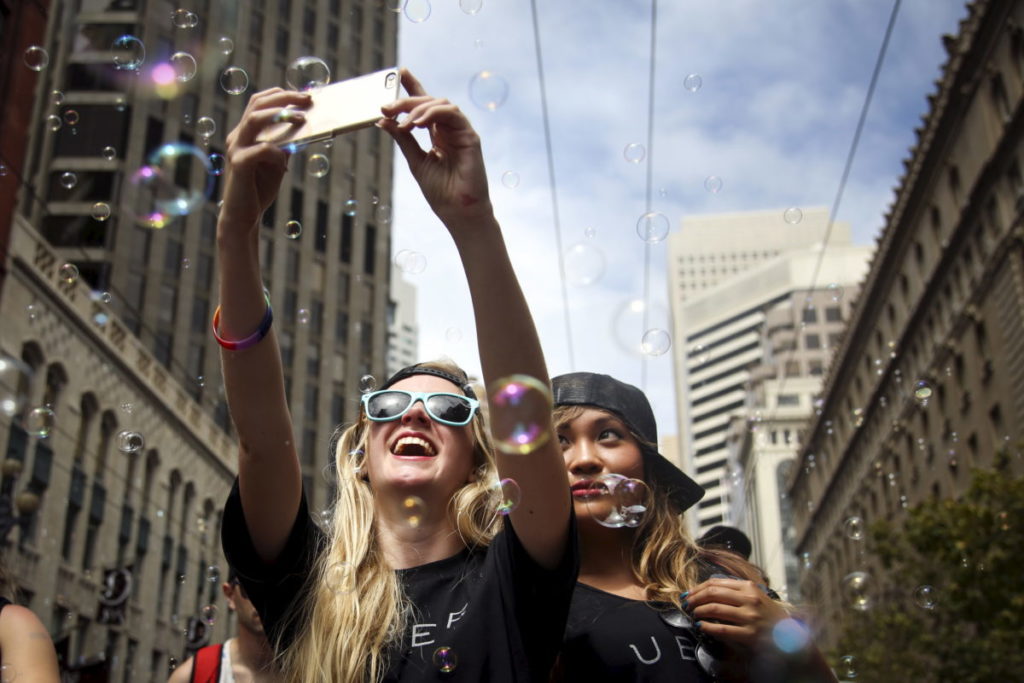 Women around the world came forward with stories of being mistreated in the workplace. Those accusations led to the resignations of hundreds of powerful men.

Earlier that year, thousands of women descended on Washington for the Women’s March following the election of Trump, who was accused of sexual harassment by more than a dozen women before taking office.

While it’s difficult to quantify the impact of the movement, researchers Ro’ee Levy and Martin Mattsson did find that reporting of sex crimes to the police in the U.S. increased by 7 percent in the first three months after it started. The results held true 15 months later based on data from seven major U.S. cities.

“We sensed that the movement broadly changed public discourse,” Levy and Mattson wrote in an email to the PBS NewsHour. They added that their study suggested the #MeToo movement “had a persistent effect on reporting sexual crimes.”

For all the successes of the movement, there have been setbacks, too. In an interview with the PBS NewsHour, one of Bill Cosby’s accusers, Lili Bernard, said the fact that the actor faced jail time for abusing women showed there had been “this tremendous shift in rape culture towards finally believing women.” But his conviction was rare.

Allegations of sexual harassment and abuse at the hands of powerful men have only resulted in a handful of convictions since the movement began. Weinstein recently reached a $44 million tentative settlement agreement to resolve the civil lawsuits against him. He still faces criminal charges.

Many women saw the confirmation of Brett Kavanaugh to the Supreme Court as a loss for the movement. He was accused of sexually abusing his high school classmate, Christine Blasey Ford. Although she testified about the incident, he did not face any ramifications. Republicans said the accusations were “unsubstantiated.”

We watched countries grapple with LGBTQ rights and representation

The decade started with the repeal of Don’t Ask, Don’t Tell, a Clinton-era policy that had banned openly LGBTQ members from serving in the military. While it was a landmark legislative achievement for the LGBTQ community, gay couples were still not allowed to marry under federal law in 2010.

The U.S. legalized same-sex marriage nationwide in 2015 with the landmark Supreme Court decision Obergefell v. Hodges, which declared they had the right of “equal dignity in the eyes of the law.” A number of other countries legalized same-sex marriage over the past decade, including Argentina, France, and most recently, Taiwan and Northern Ireland.

The transgender rights movement also gained steam, in part through fights over controversial “bathroom bills” that would have required people to use bathrooms based on the sex listed on their birth certificate. In 2017, Danica Roem became the first openly transgender state legislator when she

won a seat in the Virginia House of Delegates.Along with these legislative gains, television shows such as “Pose” and “Queer Eye for the Straight Guy” along with acclaimed films such as “Blue Is The Warmest Color,” “Carol,” “Moonlight,” and “Call Me By Your Name,” carved out a bigger space for LGBTQ representation in pop culture. In 2014, “Orange Is the New Black” star LaVerne Cox made history when she became the first openly transgender person to be nominated for an Emmy in an acting category.