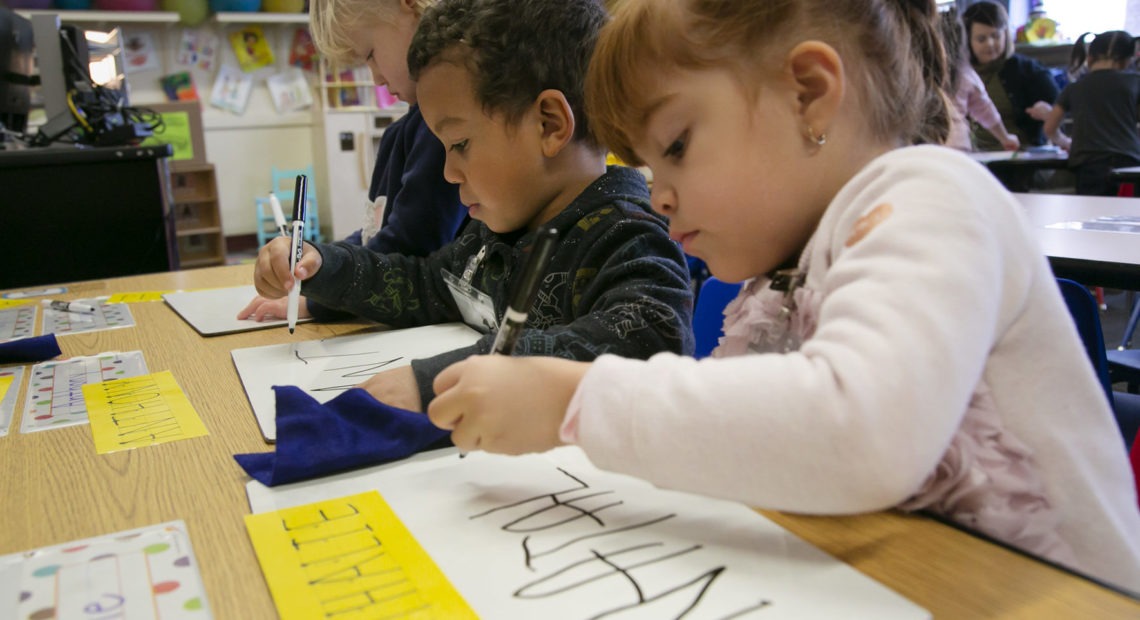 All-Day Kindergarten Takes Off In Idaho. Is Pre-K Next?

Gov. Brad Little isn’t ready to push for pre-kindergarden — yet.

But he says he’s close to making a “bold move” on state-funded pre-K, something legislators have resisted for years.

That move, when it comes, would build on Little’s literacy initiative. In his first legislative session, Little convinced lawmakers to put $26 million into early reading programs, with few strings attached.

Many schools are using their share of the money to provide all-day kindergarten to some or all of their students. Schools can’t use state literacy money for pre-K, but if state funding helps schools move money around and launch a preschool, Little is fine with it.

Either way, the literacy program is reshaping early education in Idaho — changing the school day for thousands of young children, and offering new options to their parents.

The Boise School District, considered a model for pre-K pilot models, is expanding its program.

Pre-Ks opened in October in Garfield and Whittier elementary schools — in two neighborhoods with high numbers of English language learners and students in poverty. Pilot pre-Ks in Hawthorne and Whitney elementary schools are entering their fifth year. 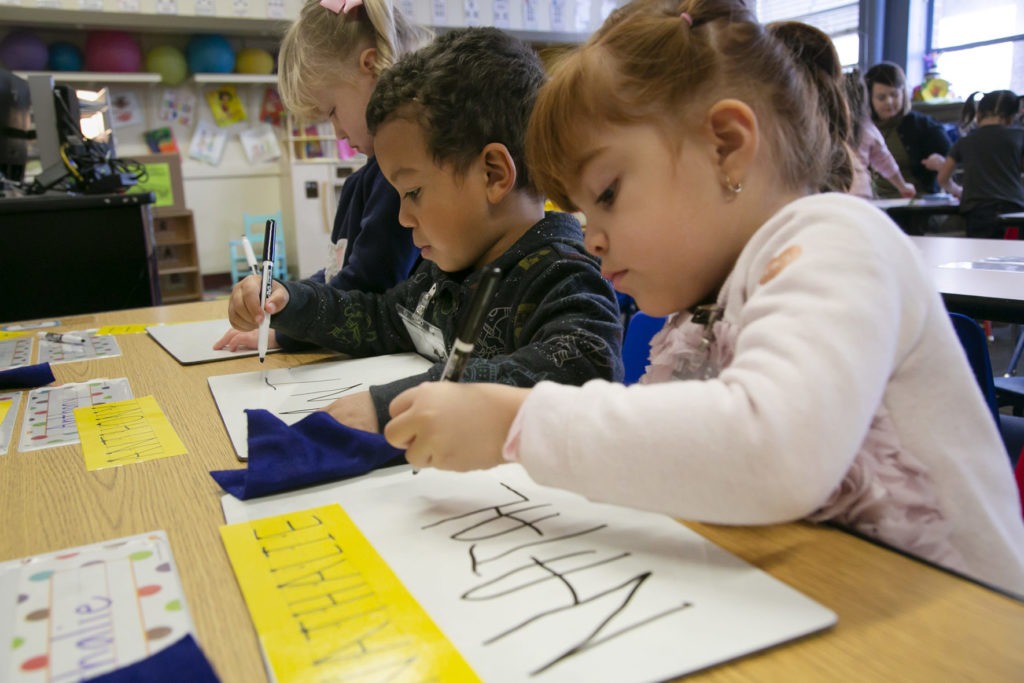 The Hawthorne-Whitney pilot represented an unusual partnership, and an unorthodox way to work around Idaho’s pre-K funding restrictions. The city of Boise funded this pilot in conjunction with a larger revitalization effort in the city’s Vista neighborhoods.

The school district is bankrolling the Garfield and Whittier pre-Ks, but the goal is unchanged: helping at-risk students learn to read and adjust to school.

In the absence of state dollars, districts large and small have to scramble to find money for pre-K, creating a patchwork:

While schools struggle to find ways to fund and maintain pre-K, advocates face another challenge: selling a skeptical Legislature on the value of early education. Pre-K is a values debate and a policy debate. Critics say the state should focus on K-12 spending, assert that young children are best taught at home, and dismiss research on the lasting value of pre-K.

The “Get Ready for School, Kuna” program, a partnership with local day-care centers and  preschools, bolsters pre-K supporters’ case. This fall, 80 percent of kindergartners from the program arrived at Kuna schools with grade-level reading skills, compared to 43 of district kindergartners overall.

Only 22 percent of Whitney’s kindergartners tested at grade level in spring 2019 reading tests, down from 37 percent in the fall. But these numbers include all Whitney kindergartners, whether they enrolled in pre-K or not. And the dropoff might have more to do with Whitney’s dual-language immersion program, which means students split half-day kindergarten between English and Spanish, said Stacey Roth, Boise’s administrator of student programs.

Meanwhile, Roth cites a 2017 study from Boise State University researcher Vanessa Fry, which concluded that Vista pre-K students outperformed kindergarten classmates on fall reading tests. But even that study suggests the benefits are short-lived, as kindergartners who don’t attend pre-K make up some ground during the school year.

In Caldwell, the need to catch up is urgent.

Only one in five kindergartners show up in the fall with the skills they need to learn to read — the lowest numbers among Idaho’s large districts.

The first days were long for students — and for teachers suddenly tasked with working with 25 5- and 6-year-olds for a full day. It’s a tough transition, but in Caldwell, it’s a necessary one.

“We have to do something different,” French said.

This is an increasingly common sentiment. At least 81 districts and 16 charter schools are offering all-day kindergarten to at least some students. Literacy dollars help fund these programs, in Caldwell and elsewhere.

Cascade also started all-day kindergarten this fall, and Crystal Rosen is optimistic. The small district’s lone kindergarten teacher hopes to use the added time to bridge gaps — between well-prepared students who attended preschool and have engaged parents, and the students who don’t know their letters. “I have kids coming in from all over the place.”

Teachers say the longer day provides more time for reading — and makes for a less hurried day. Parent Megan Ferrel is seeing the difference as well.

Her son Finnley is in all-day kindergarten at Emmett’s Shadow Butte Elementary School. He’s catching up on reading skills — learning the letters in his name, picking up letter sounds and sight words — and that was the main reason he was moved into the all-day program. But she says Finnley is having more fun at school, since teachers also have time for music and art segments.

“I’m really glad that he’s in that program,” she said. “He’s happy, and that’s important.”

But testimonials from administrators, teachers and parents only go so far.

State Board of Education President Debbie Critchfield knows the state will need to make a data-driven case for all-day kindergarten, especially since some legislators are skeptical about putting so many literacy dollars into the concept. Building that case will take time, since Idaho is using a new reading test, and a number of all-day kindergarten programs are just starting up.

There’s one pragmatic reason for schools to invest state dollars in all-day kindergarten: They’re allowed to do it.

Idaho remains one of only four states that doesn’t fund pre-K. Pre-K is popular with education and business leaders — and a vast majority of Idahoans, according to a 2018 poll commissioned by AEYC, the early education advocacy group. But political leaders have resisted funding even optional pre-K programs.

But the landscape could be shifting, however slowly.

With Little’s blessing, AEYC applied on Idaho’s behalf for a federal pre-K grant. The money wouldn’t expand pre-K, but it would allow Idaho to take an inventory of what’s already available. That in itself is a breakthrough, state superintendent Sherri Ybarra said.

“(It) really is a step in the right direction,” she said.

Little’s position on pre-K has been inconsistent. In 2017, he joined a broad-based coalition testifying in favor of pre-K at the Statehouse. A year later, during the Republican gubernatorial primary race, Little said he opposed state-funded pre-K. But in a recent Idaho Education News interview, Little said the state absolutely has a role in making sure kindergartners are ready for school. “I could say I’m not responsible for them, but that’s not true.”

That translates into a state role in pre-K, but Little is mindful of the political obstacles. For Little to call a pre-K push a “bold move” is probably not hyperbole, given the resistance within his own party. Little said he wants to build a case by adequately funding K-3 programs first.

In Caldwell, French also takes the long view. She is glad to see Idaho getting started. But pre-K remains spotty and kindergarten remains optional, so there’s a long way to go.

Originally posted on IdahoEdNews.org on December 18, 2019. This article is re-published with permission.