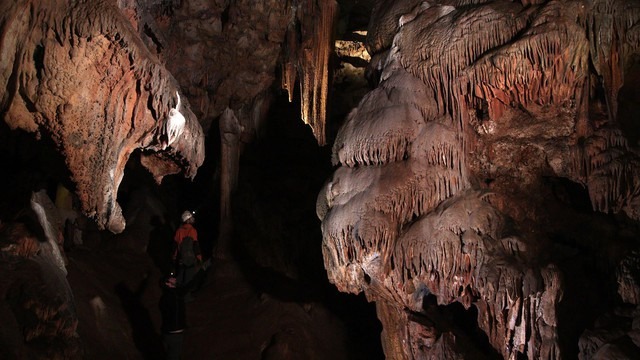 By day, Neil Marchington is a Deschutes County deputy sheriff. But get him off the clock, and chances are he’s exploring some random dirt road or barely marked trail, daughter in tow. The spots Neil seeks rarely show up on maps — if they even have names at all.

“Here we are, No Name Cave,” said Marchington, as he hikes down a rough trail at the end of an almost unpassable dirt road in southern Oregon. He stops at a steel gate set into a small cliff face and leans down to pick up a beer can. “There’s always a Keystone Light trail to known caves. It’s one of the sadder parts of North American existence.”

Neil is one of Oregon’s most accomplished cavers. Chances are, if there’s a passage big enough for someone to enter, he’s crawled through it, or even helped discover it as a member of the Oregon High Desert Grotto organization. [He previously helped lead Oregon Field Guide on expeditions to glacier caves on Mount Hood and Mount St. Helens.] It started out as a hobby, but in the past decade, he’s carved out an unusual niche as a highly respected, subterranean citizen scientist.

Today he’s on a mission to find specimens of an undocumented white millipede species, as well as any other critters that he doesn’t recognize, and he’s brought along his daughter, Aspen, as well as his friend, Lonnie Seiders, and Bureau of Land Management biologist Jason Riley.

After passing through the gate, which requires a key from the BLM, into a small indent in the cliff face, the team puts on helmets and headlamps and slides one-by-one into a small hole. To get to No Name Cave, first you have to shimmy through a long, dirt-lined belly crawl. It’s not a place for the claustrophobic — or the arachnophobic.

“This crawl is lined with harvestmen [spider-like arachnids] and tissue moths today,” said Marchington, pointing out the daddy longlegs covering the wall, rising up and down like they’re doing push-ups.

But what the crawl space is missing is the spider that brought Marchington international attention.

In 2010, Marchington was part of a conservation group that was exploring a nearby cave when they came across a single, mysterious spider. He volunteered to collect more specimens and he found them here.

The spiders were reddish brown with a leg span up to three inches and big, hooked claws.

They were strange enough that the scientists thought that it might not only be an undiscovered species, but a new genus of spiders. That would be a step up the taxonomic ladder, making it a significant discovery for America, where our spider diversity is relatively well known.

“Then, months and months go by, and we finally hear back that it’s an entirely new [taxonomic] family, which was just a remarkable discovery,” Marchington says. “It’s something that hadn’t happened in North America for over a hundred years.” 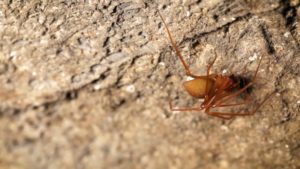 The discovery of the Troloraphtor marchingtoni spider made headlines around the world. It was the first new taxonomic family of spiders discovered in America since 1890. CREDIT: Brent McGregor

The spiders seem to be an evolutionary throwback frozen in time in these Oregon caves. Their closest relatives are spiders in the fossil record that crawled the earth in the age of dinosaurs. So they called the spiders trogloraptors, which means “cave robber” but also takes its inspiration from the big-clawed velociraptor dinosaurs.

“I sort of put it out of mind: it was a project that I’d helped with and didn’t really think a whole lot more about it,” Marchinton said. “Then, I got a surprise phone call one day. It was a reporter from the San Francisco Chronicle asking me about the new species that was named after me.”

The scientists had named it Trogloraptor marchingtoni, as a credit to Marchington’s field work. Newspapers started calling him from around the world, and the story ran everywhere from The Telegraph of London to The Pakistani Times.

The attention passed, but Marchington got hooked on the thrill of biological discovery. He learned how to identify all the cave-dwelling arthropods catalogued by science, taught himself how to collect unidentified specimens and started building a network of scientists to send them to for identification.

As we enter the large antechamber of No Name Cave, the team sets to work, peering into holes and crevices, looking for all sorts of creepy crawlies.

“I found an arachnid,” happily chimes 13-year-old Aspen. “He’s cute. He’s on this web, and I’m just going to assume his gender.”

“That is a female spider,” corrected Marchington, with nary more than a glance at its pedipalps. “But what species she is, I don’t know. We’ll try to scoop her up.”

The most terrifying thing about collecting arachnids in caves might not be the darkness or crawling through cobwebs. It might be using your mouth to suck them up with a hose, which Marchington proceeds to do, before depositing the spider in a collection vial.

Granted, there’s a screen in it to catch them and them blow them into a vial, but Marchinton said simply, “Things sometimes come through.”

After they finish searching the antechamber, the team heads into No Name Cave’s grand room. The cave, like the Oregon Caves and a few others in the Siskiyou Mountains, stands out in Oregon because it’s marble, instead of the state’s more typical lava caves. They’re the picture-book definition of a beautiful cave: dripping stalactites and stalagmites, glistening crystal bell formations and, of course, a little of the deliciously named cave bacon formations.

“I love this room,” said Marchington, as his headlamp scanned the ceiling. “Can you hear the echo? It’s just a big chamber full of crystals.”

“There’s a bat,” exclaimed Aspen. “The bat’s hanging out on the wall being adorable.” 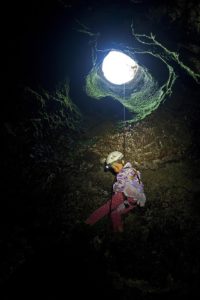 Aspen repels into a cave as a small girl. “She’s never really known a life that didn’t include caving and research in the field with invertebrates,” her father says. CREDIT: Brent McGregor

While the adults marvel at the cave formations, Aspen begins to search them.

“One of my early childhood memories of Aspen is a cave in Nevada,” Marchington recalled. “We were dragging her through the cave at 6-months-old in a baby bunting, through crawl passages over mud. So that’s sort of the way Aspen’s grown up. She’s never really known a life that didn’t include caving and research in the field with invertebrates.”

“I’m just too used to being in caves: I can’t stand the sunlight,” Aspen joked, with a black hoodie pulled low over her eyes and blue-dyed hair. “I’m a vampire. It’s my dad’s fault.”

Caves play an exciting role in science because they are refuges. Primitive creatures like the trogloraptor can persist here long after their surface relatives die off, providing a bridge to understanding the past.

At the same time, since caves are isolated, they are also natural laboratories for evolution. Each new discovery can lead not only to greater understandings of the past, but possibilities for the future.

“Some of the cave creatures are really, really unique,” Marchington said. “We’ve had a lot of research going on with cave bacteria. They may be new classes of antibiotics that could literally save us from pandemics going forward into the future. Vampire bat saliva has come up with a really unique compound that’s probably going to be just a remarkable treatment for stroke patients.”

If caves are at the forefront of science, Marchington is on the vanguard of that research. He can’t find enough scientists to document all the species he collects. He even named a species of harvestmen he found in an ice cave in the Wallowa Mountains after his daughter: Taracus aspenae.

Aspen Marchington displays the unidentified millipede that they think is a new species to science. Her favorite descriptor for many of the creepy-crawly cave critters? “Cute.” CREDIT: Brandon Swanson/OPB

“We’ve probably found at least 30 species new to science,” Marchington said. “Only a handful of them have gone all the way through the peer review process and are official.”

That’s a remarkable feat for anyone, but particularly for someone without a science degree.

“Discovering a new species is the Holy Grail of science,” said BLM biologist Jason Riley. “Neil is kind of a legend, at least in the biology world. They say every cave he goes in, he comes out with a new species.”

In the case of this trip, it’s a small white millipede that one of  Marchington’s scientific collaborators is finalizing, with the help of one last specimen.

“Look, one’s on my hand,” said Aspen, as the inch-long white millipede crawls over her fingers. “Look at that. He’s such a happy little guy.”

For Marchington, finding new species is all part of the allure that keeps him driving down those abandoned roads and flying to far-off places, where a small hole in the ground can lead to a whole new world.

“Particularly, today, we can look at satellite images, and we can look at topo maps, and we can use GPS,” Marchington said. “None of that works down here. You can’t see anything beyond your headlamp. I think that helps drive some of that fascination, just the unknown, and never knowing what’s really around the next corner.”