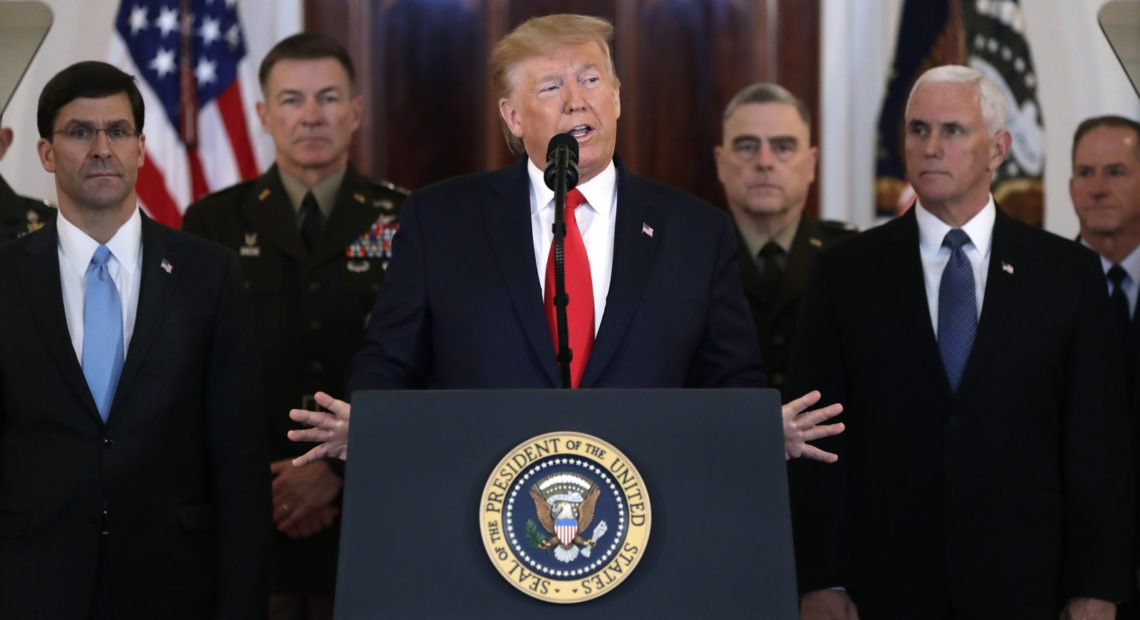 President Trump said Iran appears “to be standing down” after Tuesday night’s missile attack in Iraq and that “the American people should be extremely grateful and happy no Americans were harmed.”

Trump, in a nationally televised address from the White House, also announced a new round of what he termed “punishing economic sanctions” against the Tehran government. And he called on NATO to become “much more involved in the Middle East process.”

Iran launched missile strikes against U.S. military and coalition forces in Iraq in apparent retaliation for the killing of Qassem Soleimani, the Iranian military commander. 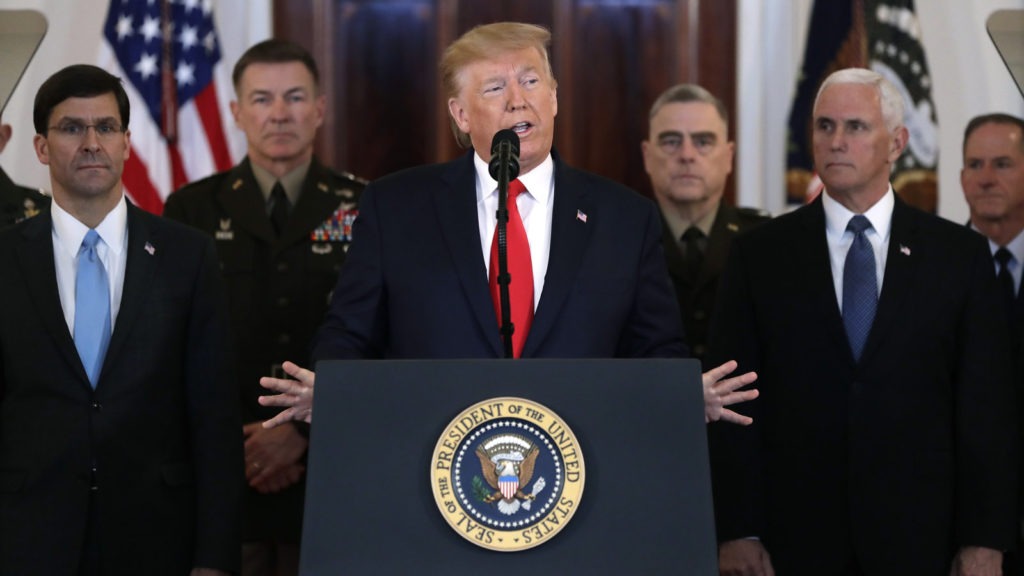 Trump credited the dispersal of forces at the base, “and an early warning system that worked very well” for the lack of casualties.

Soleimani “should have been terminated long ago,” Trump said, calling him “the world’s top terrorist.”

Defense Secretary Mark Esper suggested on Tuesday that Soleimani was a matter of days away from launching more violence against Americans or U.S. interests, but public details remain scarce.

“All is well! Missiles launched from Iran at two military bases located in Iraq,” Trump said in a tweet late Tuesday. “Assessment of casualties & damages taking place now. So far, so good!”

A U.S. official told NPR that there was no initial indication of any American casualties from the Iranian attack.

It wasn’t immediately clear what kind of effect the damage might have on American military capabilities in Iraq, but the United States has other air bases and vast forces arrayed around the Middle East.

One question on Wednesday morning was whether the absence of any American casualties might offer a way for the two countries to de-escalate from rising tensions that have led to speculation about an armed conflict. Trump had previously warned that “if Iran wants to fight, that will be the official end of Iran.”

Mohammad Javad Zarif, the Iranian foreign minister, called Tuesday night’s missile strike “proportionate measures in self-defense.” “We do not seek escalation or war, but will defend ourselves against any aggression,” he said on Twitter.

Before the attacks he also told NPR’s Mary Louise Kelly, who is in Tehran, that Soleimani’s killing “amounts to war.”

The president’s tweet on Tuesday night followed days of tensions that began last week as Iran-backed Iraqi militiamen and their supporters targeted the U.S. Embassy in Baghdad, setting fires and damaging a perimeter gatehouse at the complex.

Days later, the U.S. killed Soleimani, who was visiting Baghdad, along with a senior leader of a Shiite militia group.

Earlier this week, Trump said the U.S. would strike Iranian sites, including cultural ones, if the Islamic Republic retaliated. The Pentagon and other officials have since walked back those remarks.

In the days after the Soleimani strike, the Trump administration faced domestic political criticism over the lack of transparency following the operation. The administration maintained that the U.S. faced an imminent threat, however.

“If you’re looking for imminence, you need look no further than the days that led up to the strike,” U.S. Secretary of State Mike Pompeo said Tuesday, alluding to the violent protests outside the U.S. Embassy.

Relations between the U.S. and Iran have been fraught since the 1979 Islamic Revolution, but they have deteriorated sharply since the Trump administration withdrew from the nuclear deal that Tehran signed with the world’s powers in 2015.

The Trump administration maintained that the agreement gave Iran too much in exchange for too little. It imposed harsh sanctions designed to squeeze Iran’s already moribund economy and vowed to impose “maximum pressure.”

Since Soleimani’s killing, Iran has said it will no longer abide by the restrictions imposed on its nuclear program by the deal but added that its decision is reversible if the other signatories to the accord — Britain, China, France, Germany, Russia and the European Union — provide it economic benefits.