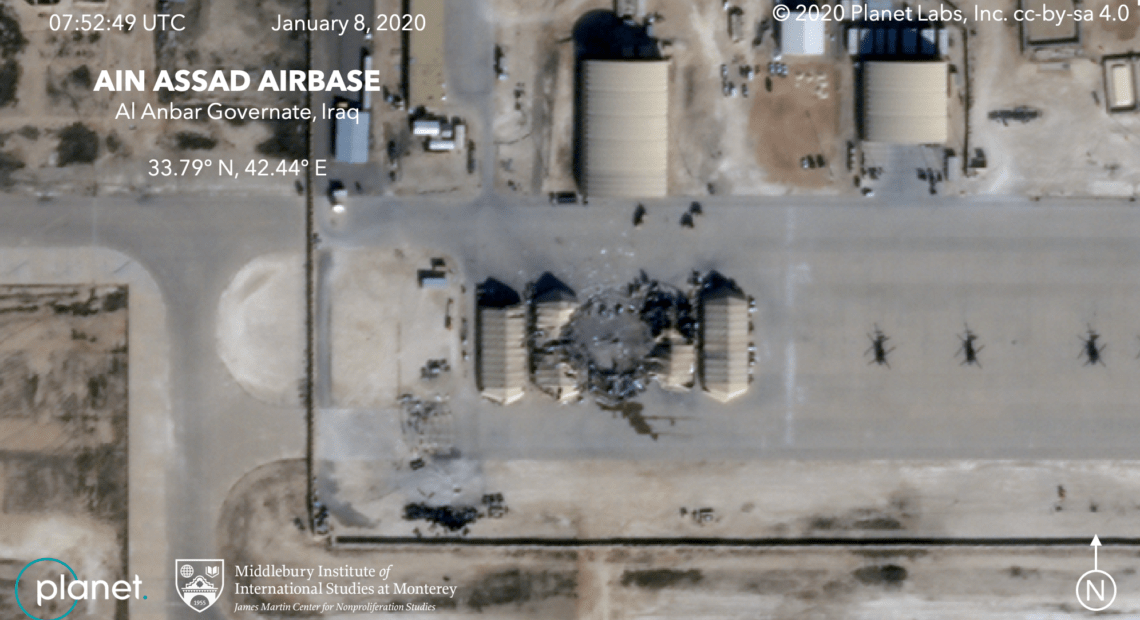 Satellite photos taken Wednesday show that an Iranian missile strike has caused extensive damage at the Ain al-Assad air base in Iraq, which hosts U.S. and coalition troops.

The photos, taken by the commercial company Planet and shared with NPR via the Middlebury Institute of International Studies at Monterey, show hangars and buildings hit hard by a barrage of Iranian missiles that were fired early Wednesday morning local time. 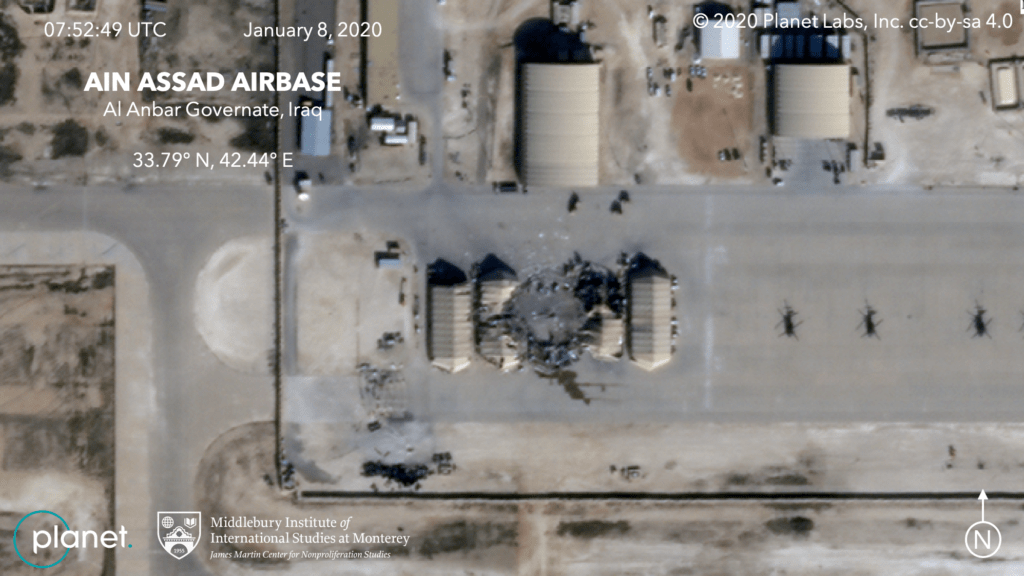 A satellite photo from the commercial company Planet shows damage to at least five structures at the Ain al-Assad air base in Iraq. CREDIT: Planet/MIIS

At least five structures were damaged in the attack on the base in Anbar province, which apparently was precise enough to hit individual buildings. “Some of the locations struck look like the missiles hit dead center,” says David Schmerler, an analyst with the Middlebury Institute.

Iran’s attack targeted at least two military bases in Iraq. The extent of the damage to the second base, in Irbil, was unclear.

Shortly afterward, President Trump said in an optimistic tweet: “All is well!

He added: “Missiles launched from Iran at two military bases located in Iraq. Assessment of casualties & damages taking place now. So far, so good! We have the most powerful and well equipped military anywhere in the world, by far! I will be making a statement tomorrow morning.”

There are no reports of casualties as a result of the strike on Ain al-Assad, which follows a U.S. drone strike in Iraq that killed Iran’s top military commander.

Schmerler says it is unclear whether targets on the base were chosen to avoid loss of life. “The buildings we’re tallying now seem to be used for storing aircraft,” he says. “There are other structures at the air base that would be exclusively for people so maybe they intended to strike sites with equipment over people.”

Photos circulating online that were reportedly taken on the ground some 20 miles from the air base show the wreckage of two missiles. “These appear to be the remnants of a Qiam missile body/airframe,” tweeted Michael Elleman, who directs nonproliferation and nuclear policy at the International Institute for Strategic Studies.

The Qiam-1 missile is a single stage, liquid-fueled, short-range ballistic missile developed by Iran with a range of up to 500 miles, according to the Center for Strategic & International Studies’ Missile Defense Project. It is capable of carrying a 1,650-pound warhead and has a precision guidance system that can be redirected during flight.

Videos posted on Iranian state media also showed what appeared to be solid-fueled missiles being launched, according to Fabian Hinz, an Iranian missile expert at the Middlebury Institute. Such missiles can be launched at short notice, are precision guided and can include decoys to foil missile defenses. They are “very advanced,” Hinz says. 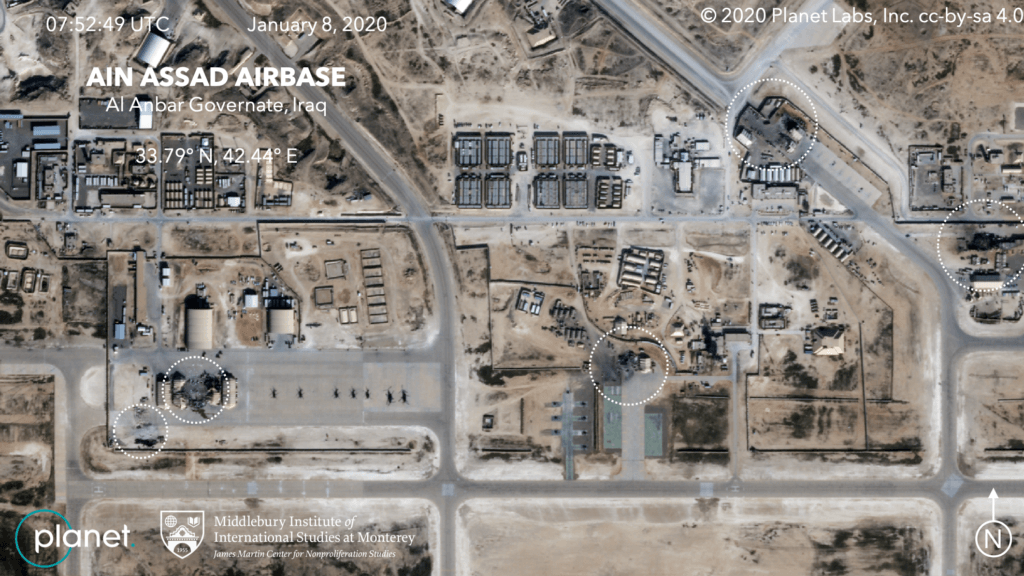 Satellite images show damage to hangars and buildings in what appears to be a series of precision missile strikes launched by Iran. CREDIT: Planet Labs Inc./Middlebury Institute

All the missiles used are far larger than the rockets used in previous attacks on U.S. personnel in Iraq. Those weapons carry warheads of a few pounds in size, while these ballistic missiles have warheads that are many hundreds of pounds. “It’s a really, really substantial difference,” Hinz says.

A U.S. official confirmed to NPR that 10 missiles struck Ain al-Assad, one hit the base in Irbil, and four missiles apparently fell short.

Analysts at Middlebury identified several impact points at Ain al-Assad, including one missile that landed on a runway — a likely miss.

Karako says he believes the strike deliberately avoided areas that house personnel. Given the apparent precision of the missiles used: “If they wanted a bunch of causalities they could have done something different,” he says.

Despite the possibly symbolic thrust of Iran’s attack — Iraq’s foreign minister says it targeted the base where the Reaper drone used to kill Soleimani was launched — Iran’s military has also demonstrated its ability to openly strike U.S. forces in Iraq at the same military installation that Trump visited last year.

“For the time being, the Americans have been given a slap, revenge is a different issue,” Iran’s Fars News Agency quotes Iran’s supreme leader, Ayatollah Ali Khamenei, as saying Wednesday. “Military moves like this are not enough. The Americans’ corruption-stirring presence should come to an end.”

Speaking at the White House on Wednesday, Trump sought to portray the missile attacks as the end of Iran’s military response to the killing of Soleimani. “All of our soldiers are safe and only minimal damage was sustained at our military bases,” he said. “Iran appears to be standing down, which is a good thing for all parties concerned and a very good thing for the world.”

But one expert on Iran says the missile attacks may prove to be only a prelude to further reprisals.

“My mother used to say a gentleman carried two handkerchiefs: 1 for show (in the breast pocket of his jacket) and 1 for blow, ie, use. I expect what we have seen is the Iranian retaliation for show,” tweeted Council on Foreign Relations President Richard Haass. “What is likely to come at some point are the deniable attacks meant to cause harm.”