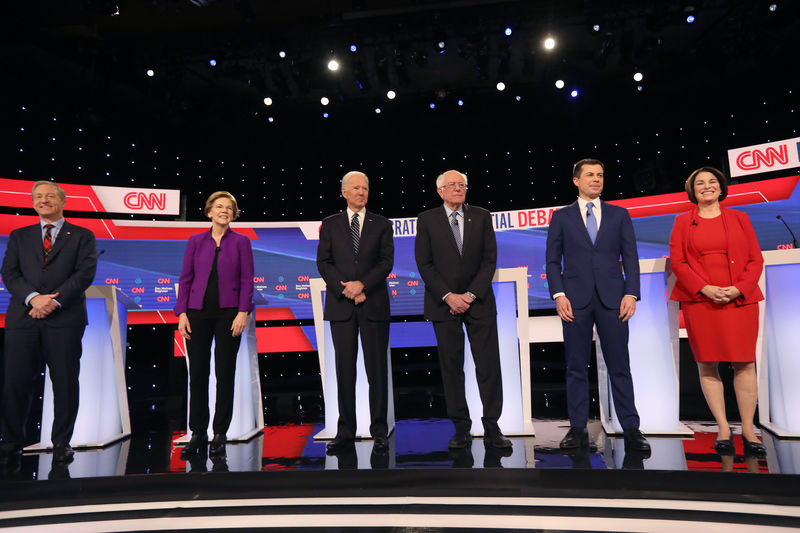 Tuesday’s Democratic primary debate was the final official debate before the Iowa caucuses on Feb. 3. But despite the added time pressure, the six candidates on stage largely avoided attacking one another, so there was no clear winner with less than three weeks left before voting begins.

Here are some takeaways from the debate.

The six Democratic candidate who qualified for the Jan. 14 debate in Des Moines, Iowa, at Drake University. CREDIT: Michael Zamora/NPR

Hanging over Tuesday’s debate was the main question on most voters’ minds: who is best positioned to beat President Donald Trump in November?

Unlike the last few debates, where the leading Democrats took targeted swipes at each other, the candidates Tuesday mostly touted their personal experiences and voting records to distinguish themselves from each other and Trump. Less combative energy on stage resulted in muted performances overall.

Klobuchar was an exception and took several opportunities to knock Trump and push back against her fellow Democrats on topics including health care and higher education.

On free college, for example, Klobuchar said her Democratic rivals weren’t thinking “big enough,” calling for them to rethink the education system. Still, Klobuchar had mixed success in her attempt to break out during a critical moment for her campaign.

A crack in the Sanders-Warren pact?

The sharpest exchange of the night featured Sanders and Warren. Their typically amicable relationship drew attention this week amid reports of the Sanders campaign’s attempt to cast Warren as a candidate for elites. And on Tuesday, news broke of a 2018 meeting in which Sanders allegedly told Warren a woman couldn’t win in 2020. Warren’s’ team released a description of the meeting, and Sanders has denied her characterization.

When asked about the alleged comments during the debate, Sanders said it was “incomprehensible” that he would question the electability of a female candidate.

“Go to YouTube today. There’s a video of me 30 years ago talking about how a woman could become president of the United States,” Sanders said.

Warren responded by arguing that female candidates and voters helped Democrats flip control of the House in the 2018 midterms.

“Look at the men on this stage. Collectively, they have lost 10 elections. The only people on this stage who have won every single election that they’ve been in are the women: Amy and me,” Warren said, referring to Klobuchar.

A discussion about the new U.S.-Mexico-Canada Agreement also highlighted differences between Warren and Sanders on trade. Sanders criticized the trade deal for not mentioning climate change, but Warren said it would help farmers and other workers who have been hurt by Trump’s trade policies.

One glaring change on Tuesday’s debate stage was the lack of racial diversity.

The primary race began with the Democratic Party’s most diverse primary field ever. Now only three non-white candidates remain: entrepreneur Andrew Yang, former Massachusetts governor Deval Patrick, and Hawaii Rep. Tulsi Gabbard. None of them qualified for Tuesday’s debate after falling short of the tighter donor and polling thresholds set by the Democratic National Committee.

The all-white top-tier could be an issue for a party that has increasingly relied on high turnout from minority voters in general elections. Nevertheless, the subjects of diversity among the candidates and the importance of minority voters were largely absent in the debate.

At one point Steyer focused on black and brown communities in his discussion of the threat of climate change. Buttigieg, who has struggled to gain traction with nonwhite voters, also tried to make a pitch to black voters. “The biggest mistake we could make is to take black votes for granted, and I never will,” he said.

A focus on U.S. foreign affairs

About half of the debate focused on foreign policy and international relations, amid escalating tension between the U.S. and Iran. The spotlight on foreign affairs offered candidates an opportunity to provide more detail on how they would handle the country’s military involvement in the Middle East should they become president.

Sanders highlighted his longtime opposition to the war in Iraq and belief that the United States should use diplomacy, not military action, to handle international conflicts.

Biden has faced criticism for his vote in support of the Iraq War. On Tuesday, he acknowledged he made a mistake in voting to go to war, but he also noted efforts under the Obama administration to bring troops home.

“It was a mistaken vote, but I think my record overall on everything we have done, I’m prepared to compare it to anybody’s on this stage,” Biden said.

In the absence of a nuclear deal with Iran, Klobuchar said that as president she would work to begin negotiations again to prevent Iran from securing a nuclear weapon.

Buttigieg drew on his military background in the foreign policy discussion, criticizing the president for sending more troops to the Middle East, and vowing to keep more military members home with their families.