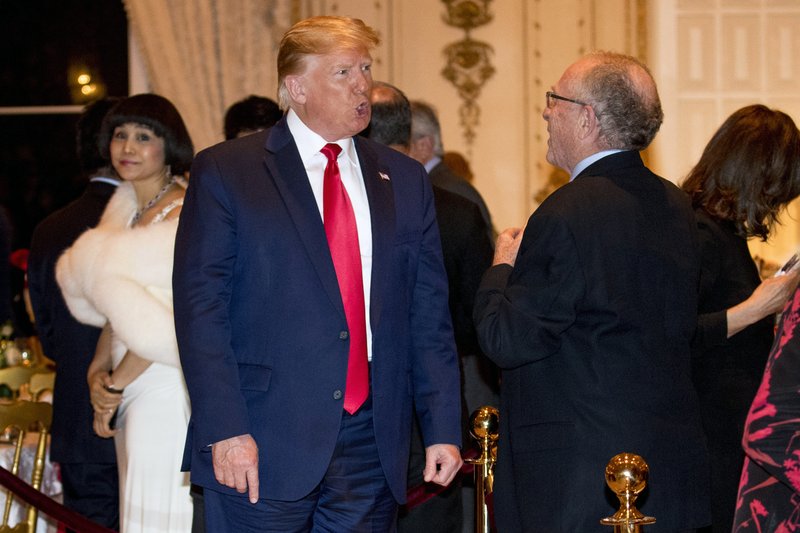 President Trump’s defense team completed its arguments Tuesday against his removal from office in the Senate impeachment trial.

“I think we’ve made our case,” White House counsel Pat Cipollone said. “All you need in this case is the Constitution and your common sense.”

He said the two articles of impeachment passed last month by the House of Representatives — abuse of power and obstruction of Congress — “fall far short of any constitutional standard and they are dangerous,” a word he repeated several times in final remarks.

Senate Majority Leader Mitch McConnell, R-Ky., said that starting Wednesday at 1 p.m. ET, senators will have a chance to submit written questions to the House impeachment managers and Trump’s defense lawyers through U.S. Chief Justice John Roberts, with each party alternating. They will have a total of 16 hours over two days for questions. After the questions wrap up, senators will then take up whether to call witnesses.

File photo. President Donald Trump speaks to attorney and impeachment defense team member Alan Dershowitz, right, as he arrives for Christmas Eve dinner at Mar-a-lago in Palm Beach, Fla. Dershowitz says he hasn’t changed at all and has a long history of representing people whose views he doesn’t necessarily agree with. CREDIT: Andrew Harnik/AP

Tuesday’s proceedings concluded against the backdrop of a New York Times report this week that cited the unpublished manuscript of a book being written by former national security adviser John Bolton about, among other things, his time in the Trump White House. Bolton writes, according to the newspaper, that Trump told him that he was withholding military aid to Ukraine until the government there began an investigation into political rivals, including former Vice President Joe Biden’s and his son Hunter’s activities. That allegation is at the heart of Trump’s impeachment.

But, in an apparent reference to the manuscript, Trump attorney Jay Sekulow told senators Tuesday that impeachment “is not a game of leaks and unsourced manuscripts.” Most of the president’s lawyers have steered clear of the Bolton report, except for Alan Dershowitz, who argued Monday that even if the former national security adviser’s allegations were true, they weren’t sufficient to remove a president from office.

Still, the news report prompted Democrats to demand that Bolton be called as a witness in the Senate trial. Democrats need to persuade at least four Republicans to defect from their party’s leadership in order to support a subpoena of Bolton, a threshold that Sen. Mitt Romney, R-Utah, said on Monday appeared “increasingly likely.”

Some Republicans have floated the idea of a deal on witnesses: one that would include calling Hunter Biden to testify. But before the final day of Trump’s defense began, Senate Minority Leader Chuck Schumer, D-N.Y., dismissed that idea.

“Hunter Biden has nothing to do with the facts of this trial,” he said at a news conference Tuesday morning.

Schumer insisted that senators should hear from the same four witnesses whom he has been pushing for since the start of the trial — Bolton; acting White House chief of staff Mick Mulvaney; Robert Blair, a White House official; and Michael Duffey, an official at the Office of Management and Budget.

“We’re not bargaining with them — four witnesses and four sets of documents,” Schumer said.

He also dismissed a proposal floated by GOP Sens. James Lankford and Lindsey Graham to allow senators to read Bolton’s manuscript in the secure room in the Capitol, a room known as the “SCIF.” Schumer called this idea “absurd.”

“It’s a book,” he said. “There’s no need for it to be read in the SCIF unless you want to hide something.”

Trump’s lawyers, who began their arguments Saturday, had 24 hours over three days to make their case — the same time given to the Democratic House impeachment managers who presented their arguments against the president last week.

The House impeachment articles accuse Trump of abuse of power for asking Ukraine to announce investigations into his political rivals, allegedly using $391 million in vital security assistance to pressure the country into launching the probes. The House articles also charge obstruction of Congress for the White House’s refusal to cooperate with impeachment investigators.

But on Monday, Trump’s defense team offered vastly different version of events, arguing that the president’s freezing of military aid was done out of a legitimate concern over corruption in Ukraine, pointing out that the congressionally approved funding was eventually released.

Eric Herschmann, another Trump defense lawyer, maintained that the holdup in military aid was not as consequential as Democrats have portrayed it to be.

“It is absurd on its face. Not one American life was in jeopardy or lost by the short delay, and they know it,” Herschmann said.

Ken Starr, who is defending Trump and who led the investigation into President Bill Clinton that triggered Clinton’s impeachment, made the case that Trump’s impeachment, the third in American history, shows that “we are living in what aptly can be described as the age of impeachment,” adding the process is “filled with acrimony and divides the country like nothing else.”

Trump defense lawyer Pam Bondi, the former attorney general of Florida, also used Monday to attack the Biden family, playing a television interview with Hunter Biden answering questions about his time as a board member of the energy company Burisma when his father was vice president.

Neither Joe Biden nor his son has been accused of any wrongdoing connected to Ukraine and Burisma. Yet Bondi cited news outlets that have covered the Bidens and the energy company before saying: “They all thought there was cause to raise the issue about the Bidens and Burisma.”

Added Bondi: “The House managers might say, without evidence, that everything we just said has been debunked, that the evidence points entirely and unequivocally in the other direction. That is a distraction.”

Andrew Bates, a spokesman for Joe Biden, characterized Bondi’s presentation as a “conspiracy theory” that has been “conclusively refuted.”

NPR’s Scott Detrow and Claudia Grisales contributed to this report.