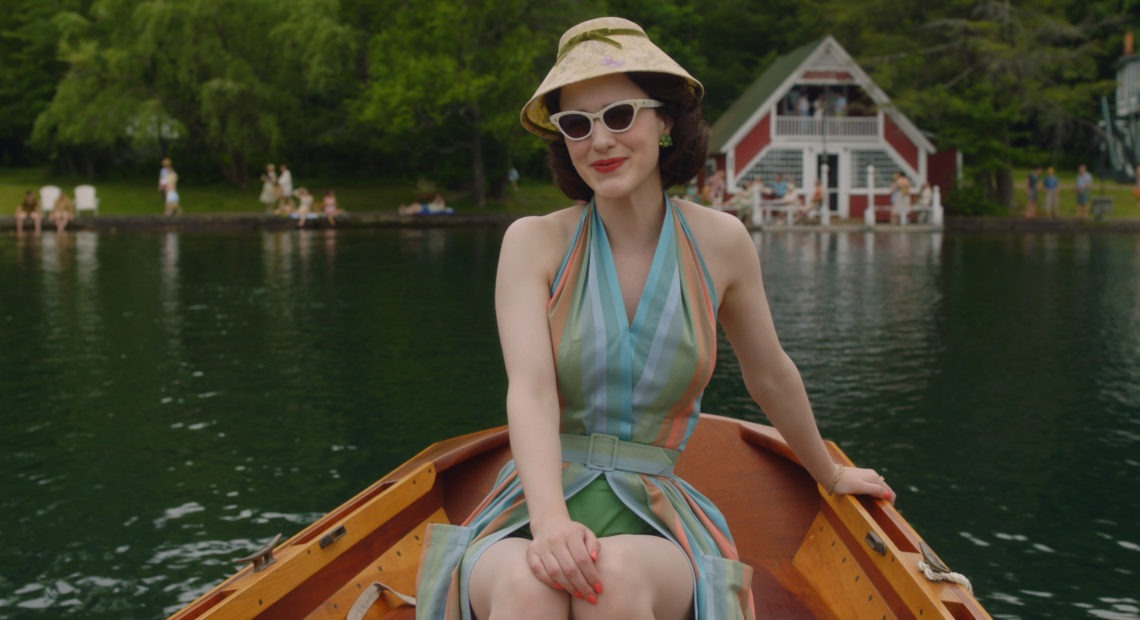 It will come as no surprise to fans of The Marvelous Mrs. Maisel that the designer behind the show’s vibrant, period-perfect ’50s and ’60s outfits works in a studio that is completely awash in color — from thousands of fabric swatches to a full spectrum of coats. Donna Zakowska has won two Emmy Awards for her work on the hit Amazon TV series and on Tuesday night, she’s up for an award from the Costume Designers Guild.

“I come from a painting background,” Zakowska explains. “I myself am personally very excited by color all the time. … I do put a lot of effort, a lot of time, into figuring out a scene like: What would that color be there? What would make sense? … There’s always a sense of a palette.” 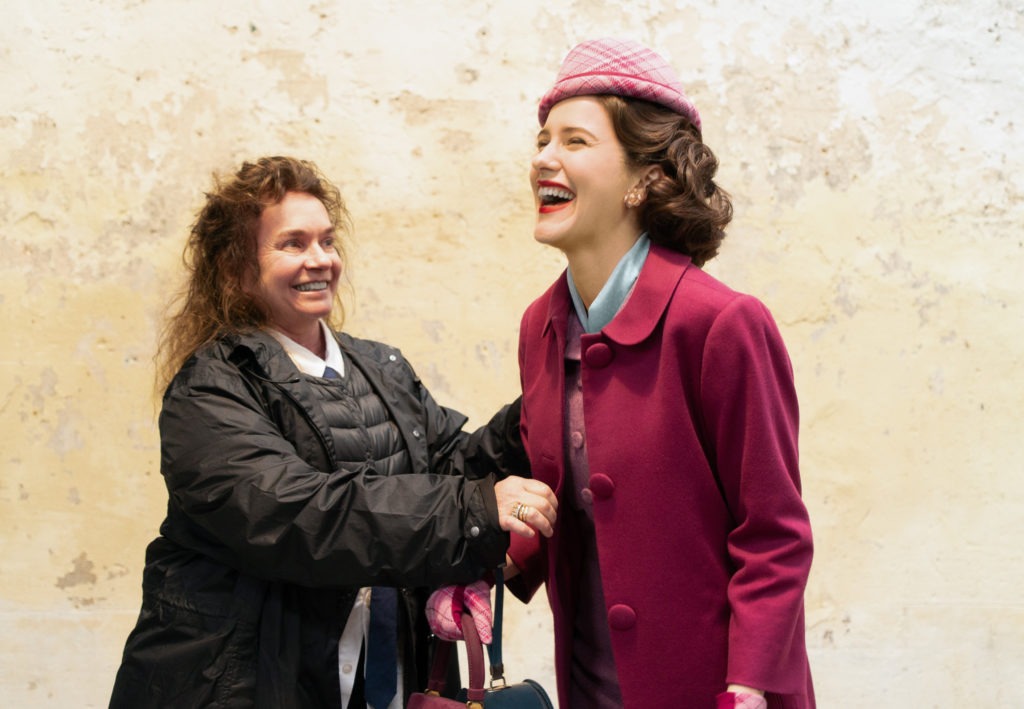 Mrs. Maisel’s world is a romanticized fantasy of color, and color comes naturally to Zakowska, who initially trained as a painter and a dancer. “I think all of this sort of evolved into costume design,” she says. “You know, the idea of color moving in space.”

The costumes also help move the plot of the show. “Color and shape and texture can tell a story just as efficiently as the way the camera moves, or the dialogue,” says Rachel Brosnahan, who plays young comic Midge Maisel.

Zakowska’s costumes help define the way Brosnahan plays her character. “These costumes change the way I move, and breathe, and walk, and talk, the way I hold my head,” Brosnahan explains. “I don’t feel complete until I look in the mirror and I have the full costume on and hair and makeup exactly right. Then I feel like I can just step in and do the acting part.”

Zakowska’s costume studio is filled with research material — magazines from the period and boards with pictures of locations from the past season.

Zakowska starts “building” boards of colorful swatches. “I begin to see the rhythm …” she says. “Having had a dance background and being a lover of music … rhythm is what it’s all about for me — the rhythm of the color and the rhythm of the texture.”

While the show is in production, the studio is filled with assistants and drapers and dressers. During shooting, Zakowska says she usually works 14-hour, sometimes 16-hour, days.

“From the time you start shooting, you’re just not going to sleep very much for about six months,” Zakowska says.

Zakowska designs everything the lead actors wear, but she also has to keep tabs on rental costumes for the show’s extras — sometimes as many as 1,000 in a single episode. “I actually oversee everything,” she says.

Zakowska says the principals are her “big, big, big focus” but that doesn’t mean she has ample time to design their costumes. Sometimes she doesn’t see a script until three days before the episode … but still, “You have to be ready to go,” she says.

Being “ready to go” means really understanding a character’s backstory — being able to explain why this outfit for this character in this scene.

And there are countless choices — hats, shoes, bags …

Three different sketches by Donna Zakowska show (from left), Midge Maisel’s exercise outfit, a formal dress for Midge to wear in Miami and an outfit for one of the performers at the USO Show, which kicks off Season 3. CREDIT: Amazon Studios

“Someone says in the script that Midge starts every adventure with an accessory,” Brosnahan says. “And Donna has really taken that to heart. Her clothes are her armor. Her clothes are how she presents her inner life to the outside world. Donna understands that so intimately.”

Speaking of intimate, Zakowska’s period costumes would not work without period undergarments. Brosnahan’s bras and corsets are created by a lingerie maker in Paris.

“I’m certainly not wearing corsets that are as tight or uncomfortable as I’m sure someone like Midge would have been wearing,” Brosnahan says. “But there are many layers of foundation garments. You know, I have pantyhose on and sometimes two petticoats layered together.” 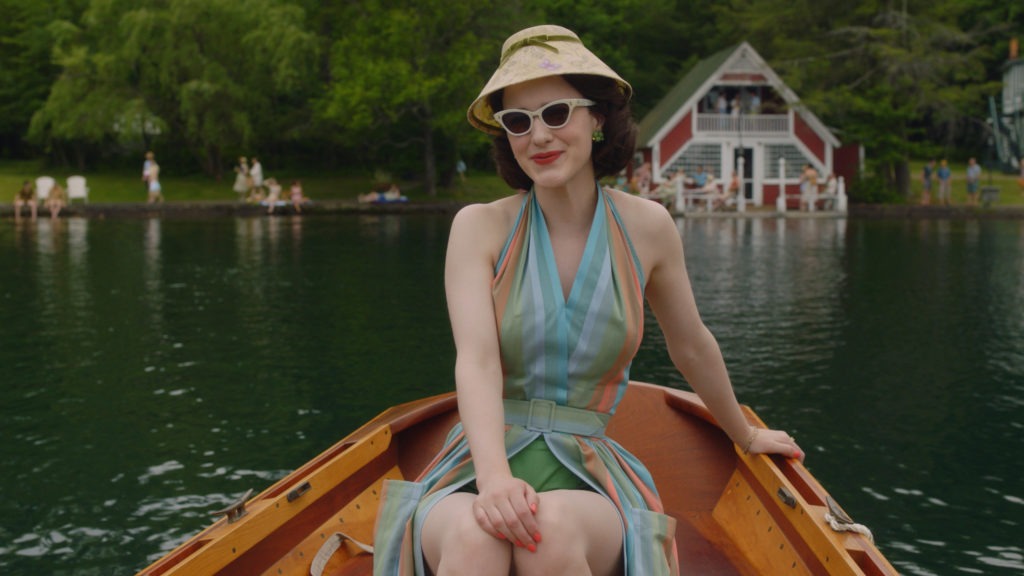 In the second season of The Marvelous Mrs. Maisel, Midge (Rachel Brosnahan) visits the Catskills. Costume designer Donna Zakowska says this outfit “in the boat with a funny lampshade hat” was among her favorites.
CREDIT: Amazon Studios

Zakowska’s costumes have become so iconic that two of them have made it into the collection at Smithsonian’s National Museum of American History. There’s the baby blue nightgown and pink coat Midge wears when she first improvises her stand-up, and a little black dress with ribbons on the straps that she wears when she becomes a professional — just like a real pioneering female comic.

“There was the allusion to Joan Rivers in the black dress with the pearls,” Zakowska says. The whole first season, I never used black on anyone — unless it was a beatnik — and built to that final black dress.”

After all, black is just an absorption of all the colors in the spectrum.

Ted Robbins edited this story for broadcast. Beth Novey adapted it for the Web.