The Senate on Wednesday night concluded the first of two days full of questions in the impeachment trial of President Trump. The proceeding offered clues about the thinking of senators, but the session consisted mostly of trial lawyers on both sides magnifying arguments they have already delivered.

There were, however, controversial moments in which Trump’s counsel took positions Democrats decried as radical or even unlawful.

Trump lawyer Patrick Philbin and Rep. Adam Schiff, one of the Democrats prosecuting Trump, sparred over a topic that reverberated after Wednesday’s session ended. 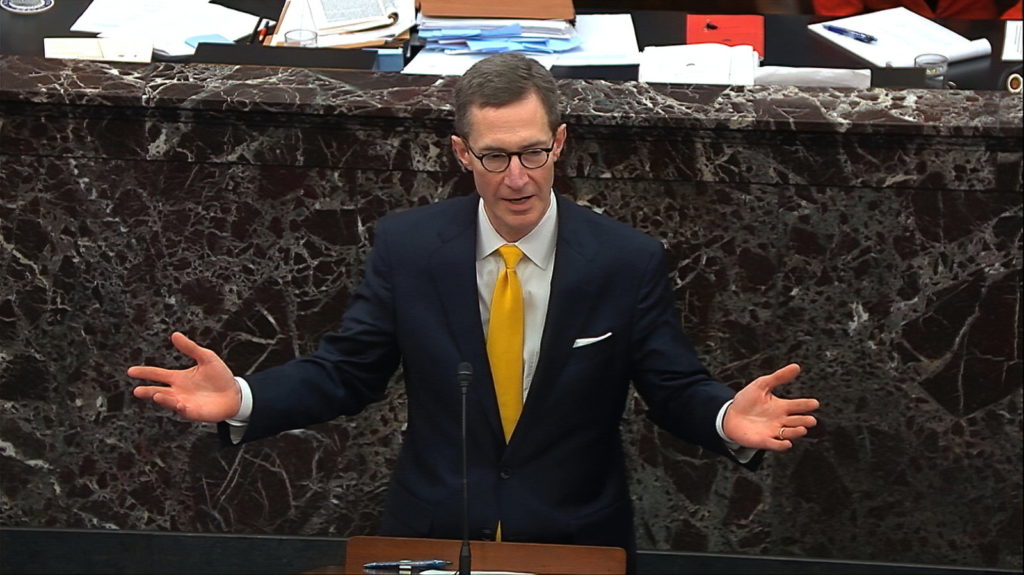 Philbin defended accepting “credible” information from foreign sources about someone running for public office, arguing that “mere information is not something that would violate the campaign finance laws.”

“If it’s credible information,” he said, “it’s relevant information for the voters to know about for people to be able to decide on who is the best candidate for an office.”

His defense echoes comments Trump has previously made about accepting information from foreign governments.

Schiff became animated in responding, saying the suggestion that seeking foreign interference in an American election is a president’s policy should have another name.”I’m sorry, that’s what I call corruption. And they can dress it up in fine legalese, but corruption is still corruption,” Schiff said.

Federal campaign finance laws do prohibit foreign contributions, or a “thing of value” from a foreign source, to U.S. federal campaigns or groups aligned with candidates.

Sen. Debbie Stabenow, D-Mich., said Senate Democrats were in “shock” when Philbin made the argument.

Sen. Mark Warner, D-Va., said he was “flabbergasted” by Philbin’s “inappropriate” remarks. “The president’s counsel tonight, in a sense gave a green light for that kind of behavior to continue,” he said. “I hope and pray that cooler heads will prevail but I think there was a dramatic step backwards in terms of protecting the integrity of our election.”

“It’s now okay to criminally conspire with another country to get help in a presidential election?” Schiff said.

Another striking exchange occurred when Trump lawyer Alan Dershowitz said if a president orchestrates a quid pro quo, or an exchange of favors, and it is done for more reasons than being corrupt, then the action should not trigger an impeachment.

“If a president does something which he believes will help him get elected in the public interest, that cannot be the kind of quid pro quo that results in impeachment,” Dershowitz said.

Sen. Richard Blumenthal, D-Conn., said the position brought Dershowitz “into the land of legal absurdity,” he tweeted. “That anything a public official does for re-election is OK. That cannot be true.”

The formal proceedings on Capitol Hill, in which senators from both parties submitted written questions to House managers prosecuting the case as well as Trump’s defense lawyers, commenced as news emerged from the White House that the National Security Council told John Bolton, its former chief, in a letter that the manuscript for his upcoming book “appears to contain significant amounts of classified information” that needs to be excised before the book can be published.

That is being contested by Bolton’s lawyer, Charles Cooper, who on Wednesday released an email he sent last week to the National Security Council in which he asserted that nothing in Bolton’s book “could reasonably be considered classified.”

That manuscript, which reportedly contains dozens of pages on Trump’s dealing with Ukraine, has loomed over this week’s Senate impeachment trial sessions. That is because the book purportedly says Trump told Bolton that military assistance to Ukraine would be released only after Ukraine opened investigations into Trump’s Democratic rivals — the allegation at the heart of Trump’s impeachment and the proceedings in the Senate.

The first question Wednesday came from Susan Collins, Mitt Romney and Lisa Murkowski, three Republican senators who have signaled they may support a vote to hear from witnesses. They asked the president’s defense lawyers how the Senate should weigh impeachment if Trump had more than one motive for his conduct. The question — like all others — were submitted to U.S. Chief Justice John Roberts, who is presiding over the trial, who read them aloud.

Attorney Patrick Philbin responded that “once you’re in mixed-motive land, once it is established that there is a legitimate public interest that could justify looking into something, just asking a question about something, the managers’ case fails.”

The first question from the Democratic side was whether the Senate could render a verdict without hearing from key witnesses, such as Bolton and acting White House Chief of Staff Mick Mulvaney.

Lead House manager Adam Schiff, D-Calif., responded, “The short answer to that question is, there is no way to have a fair trial without witnesses.” 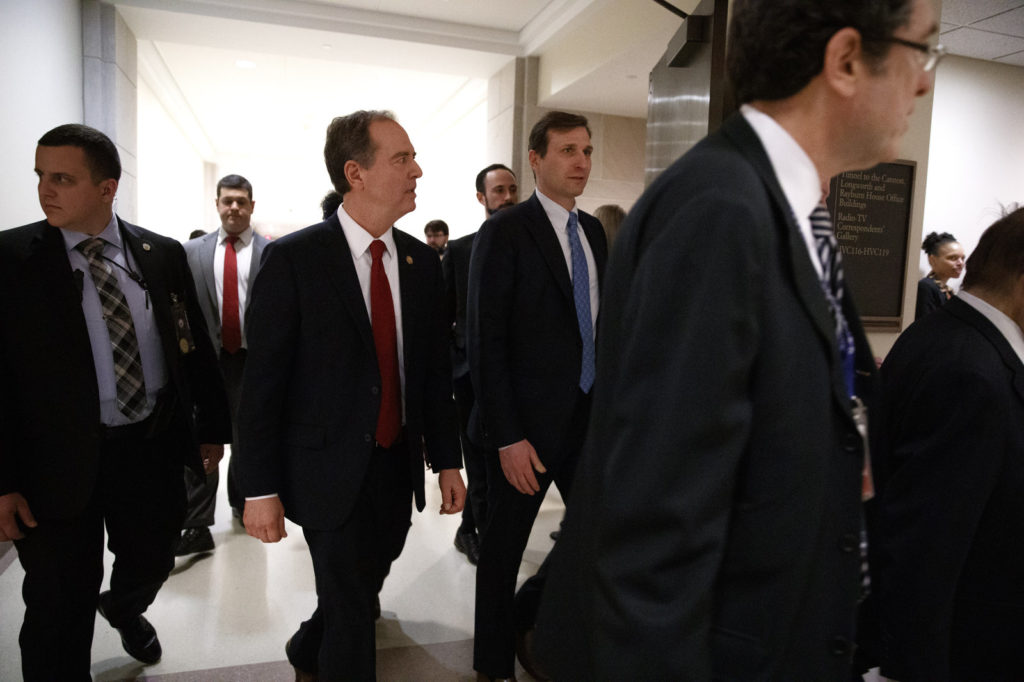 Senate Minority Leader Chuck Schumer told reporters later on Wednesday that he was uncertain about the prospect of getting 51 senators to vote to call witnesses: All Democrats and those who caucus with them would need at least four Republican senators to join them in order to get witnesses.

Sen. Ted Cruz, R-Texas, asked whether it mattered legally if Trump sought a quid pro quo from Ukraine’s leader. Trump’s attorney Alan Dershowitz responded with a broad view of executive powers, arguing that “if a president does something which he believes will help him get elected in the public interest, that cannot be the kind of quid pro quo that results in impeachment.”

But later, Schiff said: “All quid pro quos are not the same. Some are legitimate and some are corrupt, and you don’t need to be a mind reader to figure out which is which. For one thing, you can ask John Bolton.”

There was a definite shift in activity in the chamber Wednesday. Senate pages ran question cards and notes back and forth — in addition to their usual duties of running water and mail to senators’ desks. Senators were also much more engaged in the question-and-answer portion. Dozens had question cards on their desks, took notes or prepared questions. Many watched the speaker at the lectern.

The session, which was scheduled to last eight hours on Wednesday, will continue for a further eight on Thursday. This stage in the proceedings comes a day after the president’s legal team rested in its defense of Trump. Democratic House managers made their case last week on why the president should be removed from office. Trump was impeached last month on charges of abuse of power and obstruction of Congress.

Among those watching the session Wednesday was Joseph Bondy, the attorney for Lev Parnas, a former associate of Trump’s lawyer Rudy Giuliani. Bondy was in the Senate gallery as a guest of Schumer. Parnas, who has been indicted in New York for alleged campaign finance violations, wasn’t in the gallery because he has to wear a GPS monitoring device as part of his pretrial release. Bondy declined to say where Parnas would watch the proceedings from.

The two days of Senate questions set the stage for a Friday vote on whether to allow witnesses.

“I hope we can get witnesses and documents,” Schumer told reporters during a break in the questioning. “It’s an uphill fight. Is it more likely than not? Probably no. But is it a decent good chance? Yes.”

Senate Majority Leader Mitch McConnell also expressed concerns about GOP senators Tuesday. Although Senate Republicans including Romney of Utah, Lamar Alexander of Tennessee, Murkowski of Alaska and Collins of Maine have indicated they may be open to hearing from witnesses, their final decision is still unknown.

According to Democrats, multiple potential witnesses have firsthand accounts of what they say is a quid pro quo scheme with Ukraine that forms the basis of the two impeachment charges that Trump is facing. But Republicans maintain that witnesses can inject uncertainty into the proceedings and prolong the trial.

Sen. Pat Toomey, R-Pa., told NPR’s Claudia Grisales that he remains “very, very skeptical that there is any witness that is going to shed any light that is going to cause me to change my view on what the final outcome of what this trial ought to be.” Republicans overwhelmingly support Trump’s acquittal.

Among the sought-after witnesses is Bolton, the former national security adviser who captured Washington’s attention this week following the release of revelations in his forthcoming book. Those purported book details, first reported by The New York Times, placed pressure on senators to vote to allow witnesses into the trial.

But the NSC in a Jan. 23 letter to Cooper, Bolton’s lawyer, said: “Under federal law and the nondisclosure agreements your client signed as a condition for gaining access to classified information, the manuscript may not be published or otherwise disclosed without the deletion of this classified information.”

The letter, signed by the NSC’s record management official, Ellen Knight, said the council would work with Bolton to help identify what material in the manuscript could be used.

Trump’s defense team has argued that the manuscript would be “inadmissible” in the trial.

Lawyers for Trump have accused Democrats of trying to invalidate the result of the 2016 election. They say Trump has not committed any crime and therefore cannot be removed from office, even though many legal scholars say a law need not be broken to secure an impeachment conviction that would remove a president from office.

Although two previous presidents, Bill Clinton and Andrew Johnson, have also been impeached, no U.S. president has ever been removed from office.

Democrats impeached Trump last month for abuse of power and obstruction of Congress for what the prosecution team says was a campaign to pressure Ukraine into opening investigations into Trump’s political rivals by holding up $391 million in congressionally approved security assistance in order to apply leverage on Ukrainian authorities. House Democrats say the White House’s refusal to cooperate with the impeachment investigation is proof of a cover-up and amounts to obstruction.