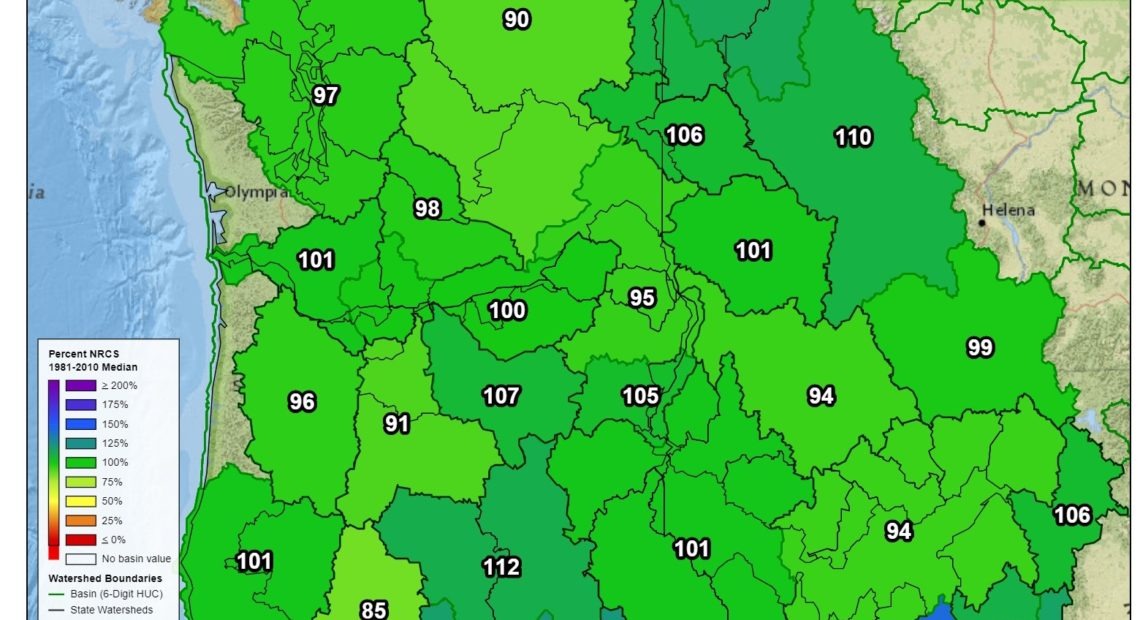 Remember the first few weeks of January? Snow-covered mountain passes, closed highways. Not great for travelers, but pretty helpful to the region’s snowpack, which is a vital source of water in the spring and summer.

At the start of 2020, the situation looked dismal. After a dry start to the season, Washington and Oregon had less than half the amount of snow they’d normally see in the mountains.

“It’s not really a New Year’s Celebration for a climatologist,” said Karin Bumbaco, Washington’s assistant state climatologist at the University of Washington.

The amount of water in Washington’s snowpack measured at 48% of normal; Oregon’s was 45%.

Quite the relief, Bumbaco said.

“We knew that it was going to be at least a snowy start to the month, but I’m not sure anyone really predicted that much of a comeback,” she said.

The first two weeks of January brought record gains in Washington’s snow-depth, Bumbaco said. Some storms brought rain to the mountains, but that didn’t melt away too much snow, she said.

Quite the turn around with the snow pack numbers at Quartz Peak (Mt. Spokane). Black line (observation) shows January started well below normal but the snowy January has brought numbers to above normal. #wawx pic.twitter.com/Pa8qeRHCXT

According to the U.S. Drought Monitor, most of Oregon and parts of eastern Washington are abnormally to moderately dry.

“It does make a big rebound. We just need continued cooler temperatures and continued storm impacts in order to maintain the momentum we have now,” Oviatt said.

He said it’s still too soon to predict how the snowpack will affect spring and summer snowmelt runoff, as well as wildfire conditions.

These recent snowpack measurements are only indicative of where things should be in January, not at the end of the season, when snowpack usually peaks around April 1. More mountain snow still needs to fall before then.

“We can’t just stop now and be fine for the spring and summer,” Bumbaco said.

Turning to February, national models suggest the Northwest could have cooler than normal temperatures – great news for snowpack to stay frozen, Bumbaco said.

“Really by Feb. 1, you want to have a good snowpack in the mountains,” Bumbaco said. “Here we are, a couple days away from Feb. 1. We’re near normal. We’re really in great shape, especially compared to some of our recent years, where we’ve had below normal snowpack all season.”