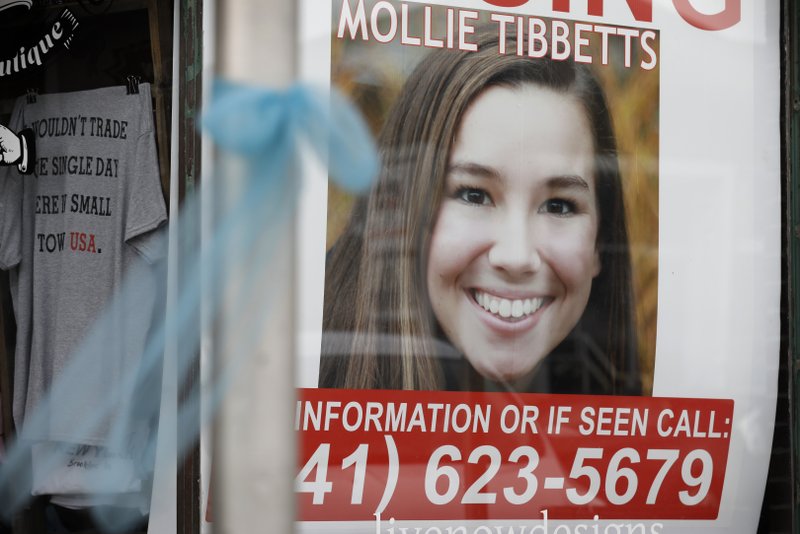 Regulators are proposing a nearly $13 million fine against a podcaster who they say illegally hid the origin of automated phone calls that used the slaying of an Iowa college student and election campaigns in other states to promote white nationalist and anti-Semitic messages.

The Federal Communications Commission said in a news release Thursday that Scott Rhodes violated the Truth in Caller ID Act that bars the manipulation of caller ID information so calls appear to come from local numbers — a technique called “neighbor spoofing.”

Associated Press attempts to reach Rhodes on Friday were unsuccessful. He had been living in Sandpoint, Idaho, but may have moved to Montana, officials have said. He’s also known as Scott Platek.

File photo. A 2018 poster for then-missing University of Iowa student Mollie Tibbetts hangs in the window of a local business in Brooklyn, Iowa. Regulators are proposing a nearly $13 million fine against Scott Rhodes, who they say illegally hid the origin of automated phone calls that used the slaying of Tibbetts, and election campaigns in other states to promote white nationalist and anti-Semitic messages. CREDIT: Charlie Neibergall / AP

Rhodes will be given an opportunity to respond to the allegations before further action is taken, the FCC said.

Officials said Rhodes used an autodialer to make 827 calls between Aug. 28 and Aug. 30, 2018, to numbers in Brooklyn, Iowa. The calls showed a Brooklyn area code and local prefixes, officials said.

Brooklyn was the hometown of 20-year-old University of Iowa student Mollie Tibbetts, who was accosted in July 2018 while out running in Brooklyn. Her body was found about a month later, and the calls began two days after her funeral.

Cristhian Bahena Rivera, who is charged with murder in Tibbetts’ killing, is from Mexico and authorities suspect he was living in the U.S. illegally. He has pleaded not guilty.

The robocalls referenced comments Tibbetts’ father made in defense of Hispanics when he addressed friends and family at her funeral. The calls questioned whether his daughter would feel the same as her dad if she were still alive, and they described Rivera as “an invader from Mexico.” The calls also urged the deportation of all immigrants living in the U.S. illegally.

The recordings said the calls were being paid for by The Road to Power, an Idaho-based group with a website and neo-Nazi podcast that officials have linked to Rhodes.

He made nearly 1,500 robocalls before the 2018 California primary criticizing Sen. Dianne Feinstein’s Jewish heritage among other things, the FCC said.

“Our Notice of Apparent Liability will not undo the harm caused by these spoofed robocalls, particularly to the grieving family of Mollie Tibbetts and the community of Brooklyn,” FCC chairman Ajit Pai said in the news release. “But it once again makes clear this commission’s determination to go after those who are unlawfully bombarding the American people with spoofed robocalls.”