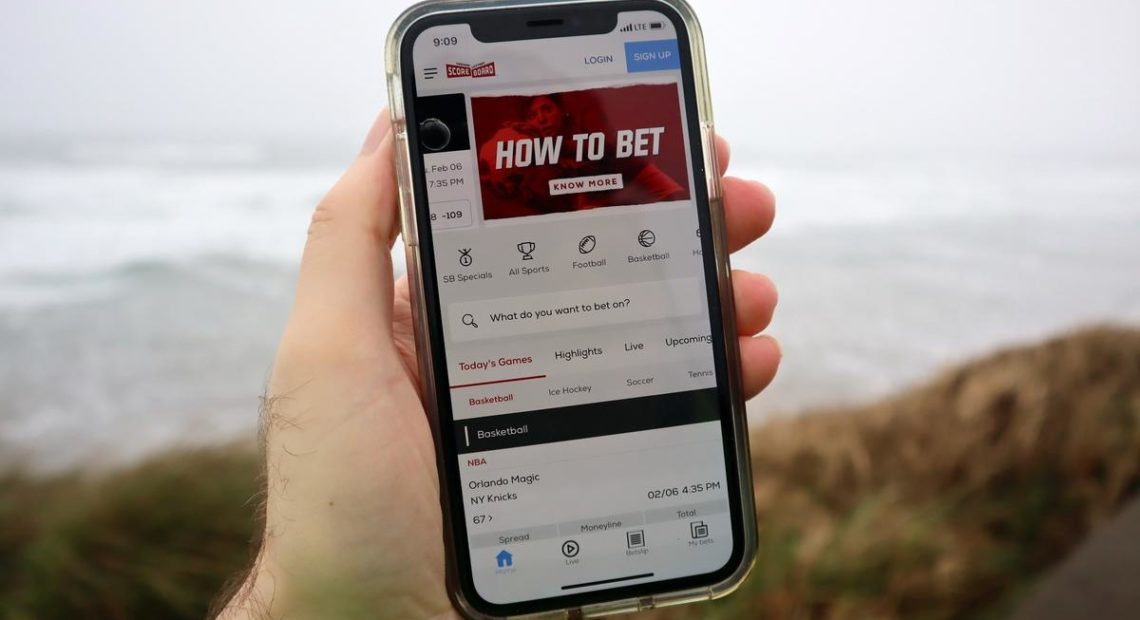 A couple of years ago, the U.S. Supreme Court cleared the way for states beyond Nevada to have sports betting. Oregon dove in last year. Idaho, Washington and California have held back. Now, Washington state lawmakers are taking a hard look at legalizing sports betting. But they do not seem inclined to copy much from Oregon’s playbook.

Since last August, visitors to the Oregon Coast — and locals — have been able to bet on a wide range of college and professional sports.

“It’s a lot more fun,” Salisbury said in an interview at the casino. “What I’m doing is harmless. It is not going to hurt anybody.”

Scheller and Salisbury were part of a steady trickle of patrons on a soggy weekday afternoon who stopped by a former poker room that the casino converted into a Vegas-style sportsbook with lounge tables, 15 TVs tuned to different games and a teller counter where attendants could explain sports betting to newbies.

Chinook Winds as well as the Coquille Indian Tribe’s casino in North Bend are in the vanguard of a fast-growing sector of the gambling industry. This piece, sports wagering on premises in tribal casinos, seems the likeliest to come to Washington state too. The rest of Oregon’s sports betting scene has longer odds to cross over.

Set To Expand In Oregon

Sports betting is set to expand in Oregon later this year with at least a couple more tribal casinos expected to add it. And then there’s the Oregon Lottery. It plans to introduce sports betting kiosks at bars and retailers. That will broaden the reach of the lottery’s relatively new smartphone sports betting app. 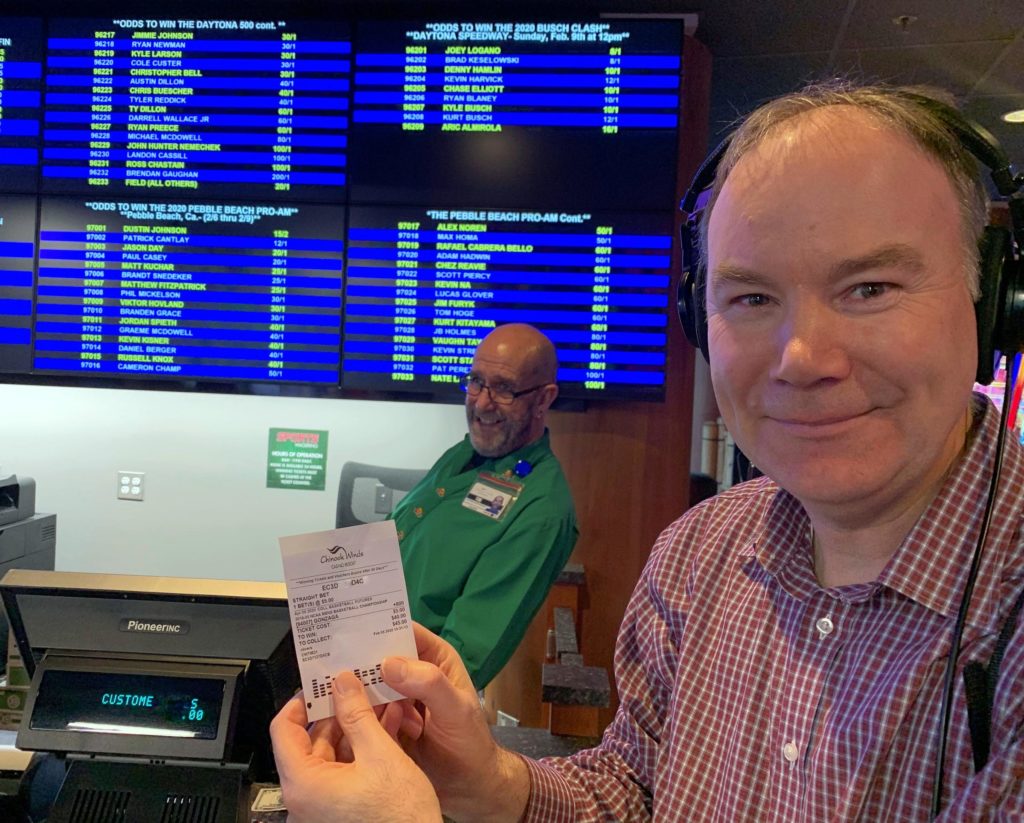 The Oregon Lottery has grabbed a big slice of the sports betting action statewide with its exclusive Scoreboard mobile app and website, which launched in October. Professional basketball and football have proven the most popular, but the state-run betting portal offers a wide range of wagers through a contract with an international sportsbook. Oregonians can bet online on everything from English Premier League soccer to rugby, cricket, NASCAR or the Tokyo Olympics.

The two tribal casino sportsbooks in Oregon allow bets on college sports in addition to pro sports while the Oregon Lottery excludes NCAA action, although a lottery spokesman said the agency is having conversations about adding collegiate sports contests.

Chinook Winds assistant operations manager Matthew Pond said he has been surprised by how much money patrons are willing to bet on sporting contests.

“When we first opened, I assumed most of our bettors would be in the $20 to $100 range on games,” Pond said. “You know, they come in and bet 20 bucks on the Trailblazers or their favorite football team — 100 bucks if they’re feeling frisky.”

But in fact, some bettors calmly wager $2,000 or $3,000 on their favored teams in big events such as baseball’s World Series or the NFL Super Bowl.

“It was surprising to see the amount of money that came in and changed hands,” Pond said in an interview.

Sports wagers become illegal as soon as you cross the state line into Washington, Idaho or California. But that doesn’t mean fans in those states are sitting on their money. Republican state Sen. Curtis King of Yakima said black market bookies and offshore casino websites are taking bets from Washingtonians.

“Sports wagering is going on in this state right now, but it’s not controlled,” King said as he introduced a proposal to the state Senate Labor and Commerce Committee. “We need to develop a system by which it is controlled.”

King sponsored one of four separate bills in the Washington Legislature to legalize sports betting to a greater or lesser degree. King’s measure would allow sports betting in tribal casinos, at horse racing tracks and in non-tribal cardrooms, also known as mini-casinos. The state of Washington would get a cut of the off-reservation revenue.

“All communities should benefit from this,” testified Vicki Christophersen, a Maverick lobbyist in Olympia. “We’re seeing across the nation the legalization of sports betting and the tax revenue that could come with that. The state can realize revenue as well as our partners in the tribes and in Indian Country.”

A competing measure — and the prevailing one at the moment in the Washington Legislature — would leave out operators like Maverick and allow sports betting solely inside tribal casinos. Puyallup tribal chairman David Bean testified in favor of having limited availability.

It’s difficult to handicap the odds for whether Washington state will join Oregon and the 19 other states with sports betting. The initial committee votes in Olympia have been favorable. But there’s not much time on the shot clock in this year’s short legislative session. Any proposal to expand gambling needs to pass with a 60 percent supermajority in both houses of the Washington Legislature, according to the state constitution. 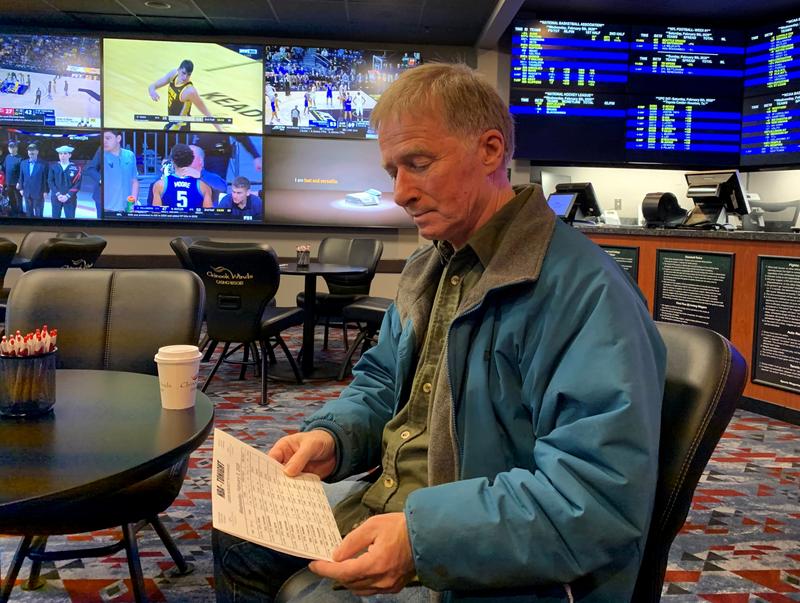 Nevada-based Maverick Gaming is spending big to get a piece of the action. It’s paying a lobbying firm $20,000 per month in Olympia, according to filings with the state Public Disclosure Commission. Maverick also undertook an extensive advertising campaign to support its position for a broad legalization of sports betting in the state.

To be sure, the 29 federally-recognized tribes in Washington are no slouches either when it comes to playing the influence game. Indian gaming tribes collectively employ nearly a dozen lobbyists in Olympia and give generously to legislative campaign committees during election season.

Washington’s major universities and the state Superintendent of Public Instruction testified to concerns about sports betting at initial public hearings in Olympia. The universities want gambling on in-state college sports to be disallowed, a provision the current bills in the Washington statehouse include.

State schools superintendent Chris Reykdal spoke against authorizing online or mobile gambling, which is allowed in Oregon. The measure that majority Democrats are moving forward in Olympia would prohibit online sports betting with the possible small exception of allowing an on-premises app for use inside authorized tribal casinos.

“The ‘You must be 18, click here,’ or ‘You must be 21,’ students are blowing right through that (warning) to access pornography, violence and to access gaming,” Reykdal said in committee testimony to lawmakers. “I would urge you not to expand any form of gaming in this state in any way until there is sufficient software and technology that is actually going to keep young people from accessing it.”

California is the scene of similar jockeying between tribal and non-tribal interests about who should get authorization to offer sports betting. For the time being, the rivalries have prevented the California Legislature from taking action. A coalition of Native American tribes is now launching a signature gathering campaign to qualify a ballot measure for the 2020 November election to allow sports betting in tribal casinos and at horse racing tracks, but not in private card rooms or online.

Non-tribal gaming businesses are lobbying California legislators to place an alternative measure on the November ballot that would allow greater availability of sports betting. The alternative, a state constitutional amendment, would need two-thirds support from the legislature to be put before voters.

Oregon avoided having much of a debate about the pros and cons of sports betting in the wake of the 2018 U.S. Supreme Court’s green light because of a legacy of the state lottery. From 1989 to 2007, the Oregon Lottery offered a game called “Sports Action” that let adults bet on NFL football games. This past year, the lottery and tribal governments in Oregon said they didn’t need to go to the legislature for permission to reintroduce and expand sports gambling because the authorization already existed from a vote way back in 1989.

Meanwhile at the statehouse in Boise, despite the lively sports betting debates or actual wagering happening on all sides of Idaho, not a single lawmaker has anted up a bill to study or authorize legalization in the 2020 legislative session. Conservatives dominate the Republican-led Idaho Legislature.