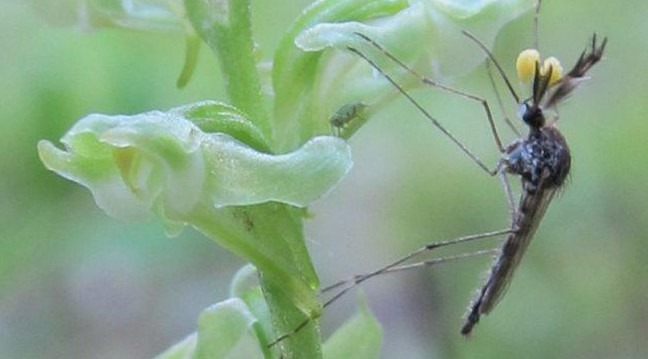 The Mosquito And The Northwest Orchid: A Love Story. Sort Of.

Don’t feel bad for not noticing the blunt-leaf orchid. Native to bogs in the Pacific Northwest among other places, this unassuming little flower is easy to miss. It’s green all over like the moss it grows out of — right down to its green flowers.

“It’s a really understudied aspect of mosquito biology,” Riffell said, “like, what are they going for in terms of sugar and nectar?”

Most people think mosquitoes drink one thing: blood. But that is far from the case. The only mosquitoes that drink blood are females and they’ll usually only bite a handful of times. The extra energy and protein from blood comes in handy when it’s time for them to lay eggs. The rest of the time, male and female mosquitoes visit flowers to drink their calorie-rich nectar. But they don’t drink from every flower, and they like some more than others.

Knowing all this just leaves Riffell with more questions: How do mosquitoes locate this flower? Are there cues the insects pick up on to recognize that it’s a sugar source?

The orchid and the mosquito are closely intertwined. In the Northwest, the orchid only blooms for a few weeks in late June and early July, the same time of year swarms of snow pool mosquitoes are hatching. In colder climates where mosquitoes hatch later, the orchid blooms later. The orchid needs the mosquito. In lab experiments, Riffell found that the orchids produced the most seeds when they were pollinated by the mosquitoes.

The snow pool mosquito is exactly the right size and shape to pollinate the blunt-leaf orchid. The orchid forms a little sack of pollen called a pollinia. When the mosquito sticks its head and proboscis into the flower, the bright-yellow pollinia sticks to the tops of their eyes, sort of like a hat. The pollinia can be almost as large as a mosquito’s head, and when there’s a swarm of them feeding from orchids, it can be quite a sight.

“You’re seeing these tiny little fireflies flying around in the daylight. But they’re not fireflies, they’re mosquitoes with these pollinia all over their heads,” Riffle said excitedly. “It’s fascinating.”

Most other mosquitoes that drink from the orchid are too big or too little to leave their meal with a sack or four of pollen stuck to their head. But when the pollen-hat-wearing snow pool mosquito visits another orchid, it will leave some pollen behind, and the orchid will produce fruit.

Riffell had to figure out how these mosquitoes were finding this orchid.

Over the course of their study they observed nearly 581 orchids, for more than 47 hours. During that time, 57 mosquitoes (mostly from the Aedes genus) visited the flowers as did one moth. Similar species of orchid were found in the same area, but mosquitoes barely gave them a second glance. In controlled experiments, Riffell found that other distantly related genuses of mosquitoes, including the ones that carry malaria, were also attracted to the orchid’s smell.

To prove they were searching for it with scent, the researchers covered the orchids with mesh bags that blocked them from view, but let air through. The mosquitoes still tried to feed through the bag, indicating that they didn’t hunt by sight, but by smell.

“And we went, ‘OK, they seem to be orienting and locating these plants without any kind of visual cue. So let’s look at their scent,’” said Riffell, who describes the scent as sort of “grassy and musty.”

Riffell and his team captured the scents of six different orchids using activated charcoal, which absorbs smells (sort of like how baking soda gets stinky after sitting too long in your fridge). They extracted the scents and analysed them, trying to figure out all the different molecules and compounds present. Across the board, mosquitoes were attracted to the unaltered blunt-leaf orchid scent. But when certain compounds were removed or increased, things changed.

“And that’s fascinating because, well, think about it. We’re able to recognize a rose. We smell a rose, and it has 300 chemicals in its bouquet in different ratios, and we can recognize it without any problem at all. And that’s what the mosquito is doing with this orchid,” Riffell said. “Those specific proportions help them recognize it as an important sugar source.”

Riffell said that some of the compounds found in the orchids mosquitoes didn’t like were the same as they ones they did. It all came down to the ratio.

And, crucially, two chemicals stood out. One was nonanal, which is a smell that humans emit through their skin, and could help mosquitoes hunt us down. Another was lilac aldehyde. It was present in high levels in plants the mosquitoes hated. And when the researchers tested what parts of the mosquito’s brain were activated by lilac aldehyde, it was the same part that’s activated by DEET, a widely used biting insect repellent.

Riffell has partnered with groups working on mosquito traps that emit smells to attract mosquitoes and then poison them with an insecticide.

“It’s a very effective way to kill local mosquitoes, and it doesn’t hurt any other insects,” Riffell said.

Riffell plans more orchid scent testing. He thinks lilac aldehyde might work as an alternative to DEET, which is a caustic chemical that melts plastic. Unlike other natural mosquito repellants like menthol, lilac aldehyde lasts a really long time before it fades, just like DEET does.

Of course, all of this is still up in the air. Things that work in the lab often don’t work in the field. But Riffell thinks this type of behavioral research could help fight mosquitoes, and in turn, fight diseases like Zika, malaria and West Nile — all of which are diseases that are expected to spread as climate change warms the earth. 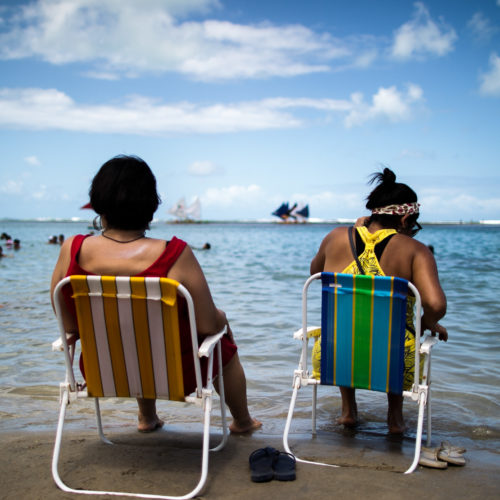 A Global Guide For Leery Travelers

Is your destination too dangerous? How do you protect yourself from health threats? With its tropical beaches and a memorable national park, Venezuela was a popular destination for American tourists a decade ago. But years of political and economic turmoil have left its tourism industry in tatters. Continue Reading A Global Guide For Leery Travelers 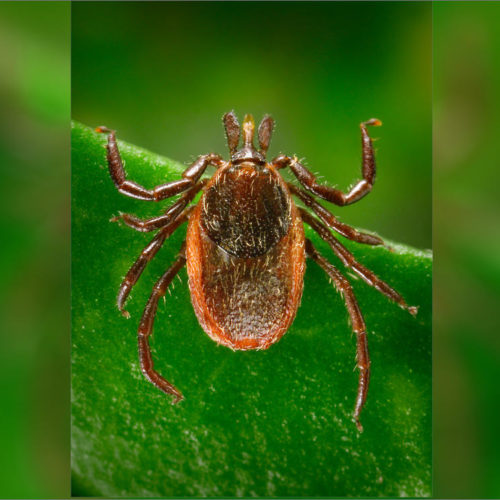 As tick season reaches its peak in the Northwest, a new report from the Centers for Disease Control says diseases spread by tiny creatures like mosquitoes and ticks have tripled in the U.S. over the last 14 years. Continue Reading Northwest Tick Season Peaks As Health Officials Warn Of Rising Disease Spread