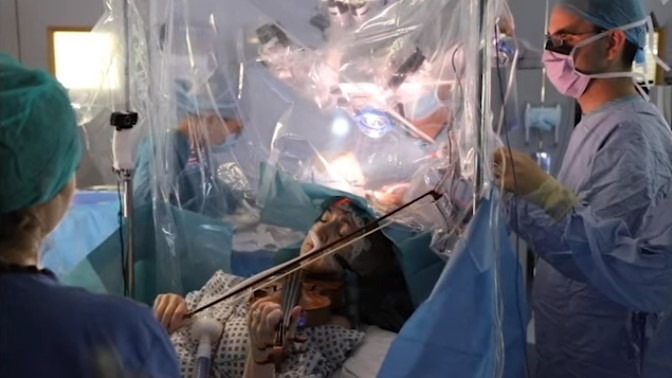 As doctors in London performed surgery on Dagmar Turner’s brain, the sound of a violin filled the operating room.

The music came from the patient on the operating table. In a video from the surgery, the violinist moves her bow up and down as surgeons behind a plastic sheet work to remove her brain tumor.

The King’s College Hospital surgeons woke her up in the middle of the operation in order to ensure they did not compromise parts of the brain necessary for playing the violin, such as parts that control precise hand movements and coordination.

“We knew how important the violin is to Dagmar, so it was vital that we preserved function in the delicate areas of her brain that allowed her to play,” Keyoumars Ashkan, a neurosurgeon at King’s College Hospital, said in a press release.

Turner, 53, learned that she had a slow-growing tumor in 2013. Late last year, doctors found that it had become more aggressive and the violinist decided to have surgery to remove it.

“And I’m just like, ‘Oh, hang on, this is my most important part. My job these days is playing the violin,’ ” she said, making a motion of pushing down violin strings with her left hand.

Ashkan, an accomplished pianist, and his colleagues came up with a plan to keep the hand’s functions intact.

“Prior to Dagmar’s operation they spent two hours carefully mapping her brain to identify areas that were active when she played the violin and those responsible for controlling language and movement,” the hospital statement said. Waking her up during surgery then allowed doctors to monitor whether those parts were sustaining damage.

“The violin is my passion; I’ve been playing since I was 10 years old,” Turner said in the hospital press release. “The thought of losing my ability to play was heart-breaking but, being a musician himself, Prof. Ashkan understood my concerns.”

The surgery was a success, Ashkan said: “We managed to remove over 90 percent of the tumour, including all areas suspicious of aggressive activity, while retaining full function of her left hand.”

While it’s rare for a patient to play their instrument during brain surgery, there have been other cases. For example, in July 2016 a team of scientists removed a tumor from a music teacher’s brain as he played the saxophone.

Brad Mahon, a cognitive neuroscientist at Carnegie Mellon University, was one of the scientists who mapped the music teacher’s brain. Mahon said that surgery was particularly intense because it was in an area of the brain that “can actually lead to loss of the knowledge of how to conduct music, how to understand music.” Ultimately, that surgery was successful too.

Mahon said the basic features of an “awake craniotomy” — the type of brain surgery where patients are awake in order to avoid damage to critical brain areas — have remained largely unchanged for decades. For example, doctors have long used simple tests such as asking a patient to name what they’re seeing in pictures to make sure language ability is preserved.

But he said that doctors are now able to map the patient’s brain activity in great detail before the surgery using an imaging technique called functional MRI. That means surgeons are coming into the operating room with far more information about a specific patient’s brain.

That kind of information helps doctors tailor tests to a patient’s particular needs. According to Mahon, an accountant once completed math problems during his surgery to make sure those abilities remained intact.

Brain mapping also can help determine what kinds of functions are at risk during a brain surgery. Having a “personalized brain map,” Mahon said, matters a lot when surgeons are making “millimeter by millimeter decisions” that could determine whether a person can even communicate after an operation, let alone follow their passions.