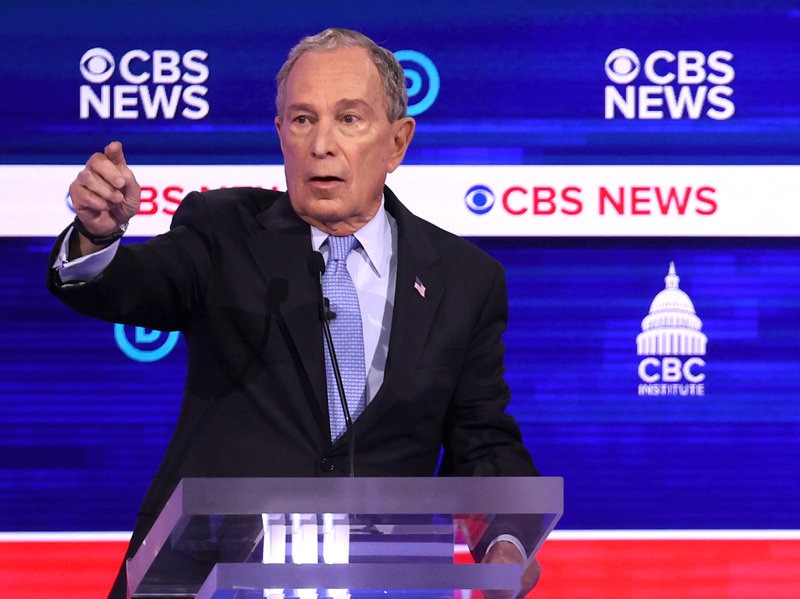 “I’ve apologized and asked for forgiveness,” Bloomberg responded at the debate in Charleston, S.C. “I’ve met with black leaders to try to get an understanding of how I can better position myself and what I should have done and what I should do next time.”

But King pressed again: “What more can you do about this issue, Mr. Mayor, to put people’s fears and skepticism to rest? It continues to follow you.”

The exchange underscores Bloomberg’s struggle to run away from the legacy of stop-and-frisk, which disproportionately targeted young men of color.

During Bloomberg’s 12 years as mayor, police in New York stopped and frisked roughly 5 million people — most of them young black and Latino men from some of the city’s roughest neighborhoods. The vast majority had done nothing wrong. In 2013, the year Bloomberg left office, a federal judge ruled that the NYPD was violating the constitutional rights of black and brown New Yorkers.

Bloomberg needs the forgiveness of African American and Latino voters if he’s going to win the Democratic nomination. His campaign is running high-budget ads, and touting endorsements from African American leaders.

For years, Bloomberg defended the policy, even after leaving office. It wasn’t until he launched his presidential bid that he said he regrets the policy. It’s a reversal that some people just don’t buy.

“It’s very absurd, and just arrogance,” said Nicholas Peart, who was a plaintiff in the landmark federal lawsuit against the New York’s stop-and-frisk policy. Peart says he was stopped by New York police officers at least 10 times.

“I remember squad cars pulling up. They just pulled up aggressively, and the cops came out with their guns drawn,” Peart told NPR in 2013. “It left me embarrassed, humiliated and upset — all three things rolled up into one.”

Peart now works in Harlem at a nonprofit organization that serves low-income kids.

At Tuesday night’s debate, Bloomberg repeated the claim that his administration brought the number of stops down “by 95%.”

Actually, Bloomberg did not end the widespread use of stop-and-frisk, even as the protests and legal challenges mounted. Neither did former Vice President Joe Biden, who tried to claim credit for the Obama administration’s doing so, at an earlier debate in Nevada.

“Both guys were really saying, ‘The plummet in the numbers was due to me,’ ” said retired federal Judge Shira Scheindlin, who issued the ruling against the New York Police Department in 2013.

“I wrote the ruling, so I guess it was me,” Sheindlin said in an interview this week at her office in Manhattan.

Sheindlin said she considers stop-and-frisk a failed policy. After all, crime continued to fall even after her ruling. But she believes that Bloomberg’s motives were pure.

“He meant well,” Scheindlin said. “However, I think he never understood the human toll. He didn’t get it. That’s all. Doesn’t make him a bad man. To me, doesn’t make him a racist. But he was blind.”

Not all New Yorkers are willing to give Bloomberg that benefit of the doubt.

No neighborhood in the city saw more stops under the Bloomberg administration than the 75th Precinct in East New York, Brooklyn. Jacqueline Alexander has lived in the neighborhood for 20 years and says Bloomberg should have known the policy would lead to discrimination.

“You know, a person like Bloomberg must understand policy,” Alexander said. “How can you not understand the impact of stop-and-frisk in an environment where mass incarceration is such a big problem?”

Other residents said they felt safer when Bloomberg was the mayor. In fact, Reggie Tinnin says he would like to see stop-and-frisk make a comeback.

“Honestly, I think, you know, they should be doing it now,” Tinnin said. “It seems like the police don’t pay attention anymore. They wait til something happen, then they come.”

Even some of Bloomberg’s critics may be willing to give him another chance. Take J.R. Clause, who works in the neighborhood as a family doctor.

“I think right now, a lot of people are gonna overlook a lot of things,” Clause said, including Bloomberg’s record on stop-and-frisk. “If you weigh that against defeating Donald Trump, they’ll close their eyes to that and go after Trump.”