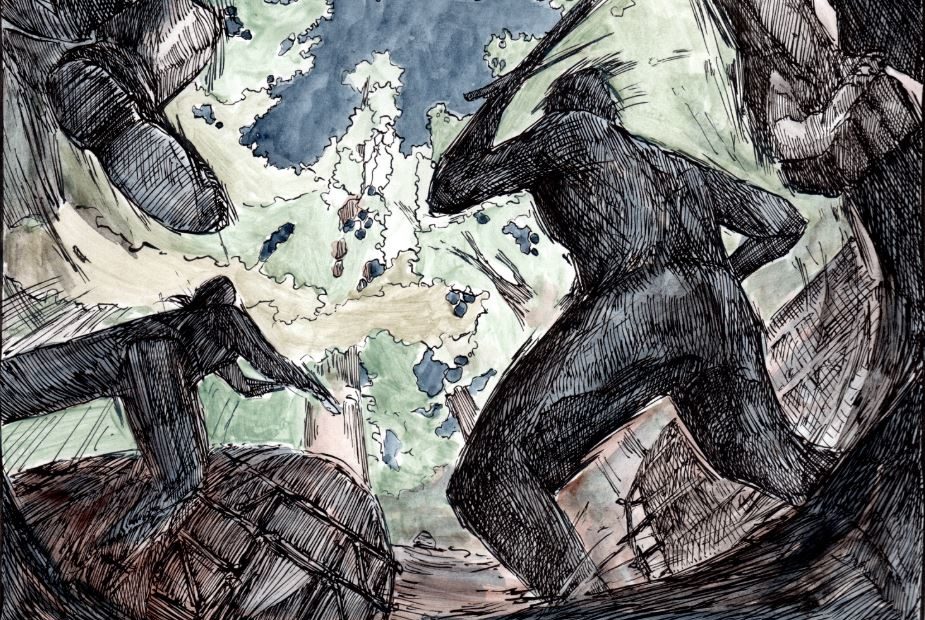 Ghost River: The Fall and Rise of the Conestoga, a new graphic novel and art exhibit, depicts a gruesome, footnoted event in American history — the Conestoga Massacre. The massacre was an act of brutality that killed an entire community of Native people and almost erased their voices from history. Ghost River hopes to give that voice back, reenvisioning the events through the eyes of Native people. (The comic is available to read online. A free exhibit featuring art from the book is running at the Library Company of Philadelphia until April.)

The Conestoga Massacre took place in Pennsylvania in December of 1763, when a band of about 50 white settlers rode 40 miles from Paxton Township to Conestoga Indian Town, (at the time, made up of 20 people). The white settlers, later dubbed the Paxton Boys, killed and mutilated six Conestoga in their homes, and then did the same for the remaining 14, who were sheltering in a workhouse nearby. In the course of an afternoon, Conestoga Indian Town was no more. 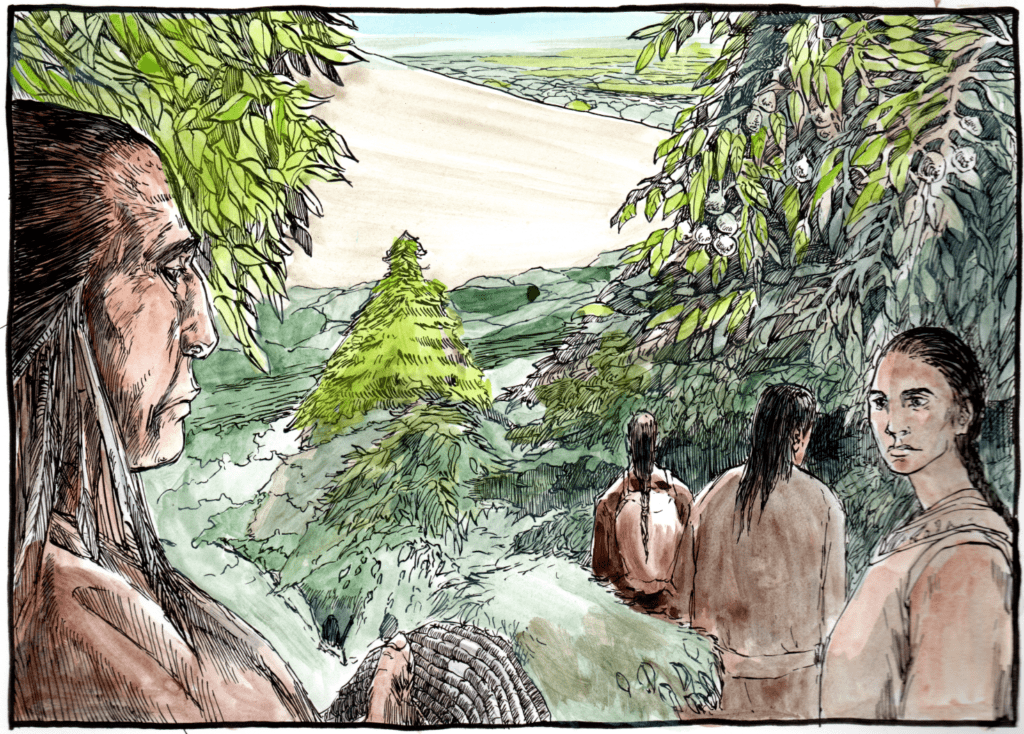 In addition to wiping out the Conestoga, the massacre ignited long-simmering tensions between Scots-Irish frontiersmen, which included the Paxton Boys, and the Quaker elite, who were perceived to be running the Pennsylvania government. People in the frontier believed that the Quakers gave resources to Native people at the expense of white settlers. Over the course of the next few weeks, those tensions escalated, and in early 1764, white frontiersmen numbering in the hundreds marched east toward Philadelphia with the thinly masked intention of wiping out even more Native people.

But before they arrived in Philadelphia, Benjamin Franklin was able to deescalate the mob. He persuaded folks to put down their weapons and, instead, print their grievances for the local government to read. What resulted was America’s first “pamphlet war.” In more than 60 pamphlets and 10 political cartoons, the settlers put their claims in writing. According to Ghost River, “At stake was much more than the conduct of the Paxton murderers. Pamphleteers staked claims about westward settlement, representation, and white supremacy in pre-Revolutionary Pennsylvania.”

But conspicuously absent from all the discourse about the massacre were the voices of any Native people. Will Fenton noticed that absence while working on an online archive of the pamphlet war called Digital Paxton. And he realized he could do something about it. Fenton, who is the director of scholarly innovation at the Library Company of Philadelphia, thought turning the story into a graphic novel would be a way to accomplish several things: reconstruct the story to include Native perspectives, make the history more broadly accessible, and showcase not just the ideas in the pamphlets, but also the visuals and political cartoons. 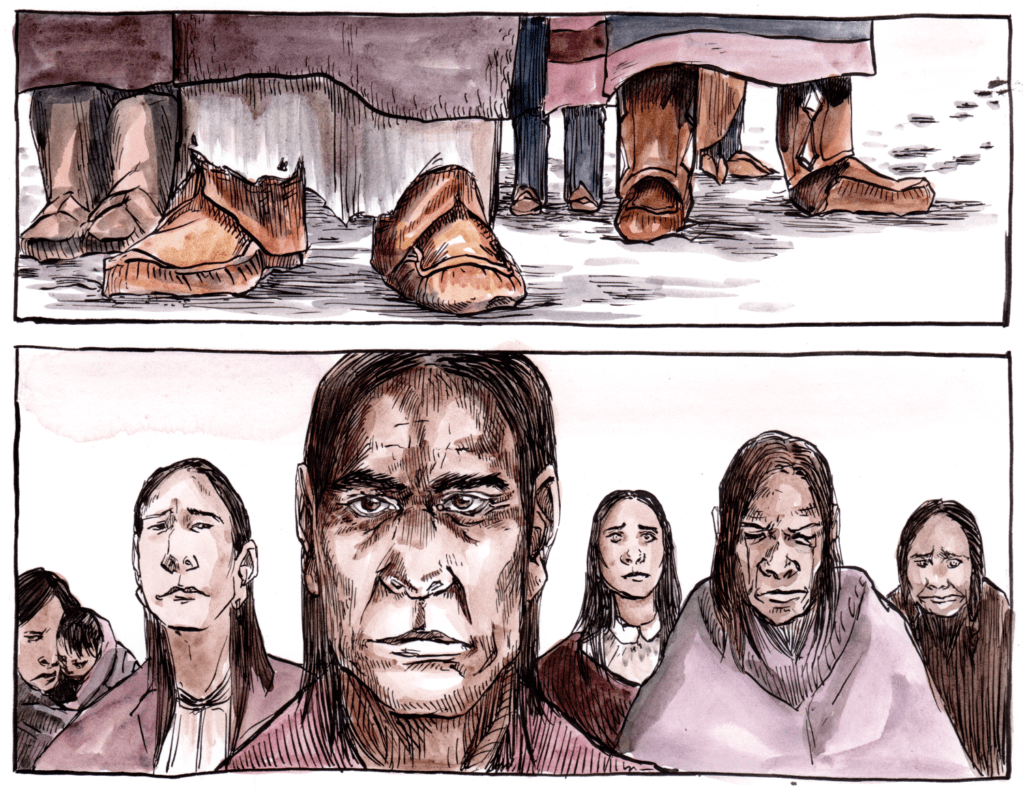 So he asked two Native artists — Lee Francis IV of the Laguna Pueblo and Weshoyot Alvitre of the Tongva — to write and illustrate the novel.

Neither artist is from the same nation, or even region, as the Conestoga. Bridging that gap was one of the project’s biggest considerations. The project’s advisers, including Lene Lenape, Delaware and other peoples who have histories in Colonial Pennsylvania, were brought on early to be part of the development process.

I talked to Francis and Alvitre about why this history is important, the nuances of writing for a Native audience, and why graphic novels are a medium that can help Native folks affirm their own identities.

These interviews have been edited and condensed for clarity.

Why comic books? Why is that your medium?

Francis: So first and foremost, I am just a big indigenerd. I love comics. I grew up on comics. I consumed comics and graphic novels and science fiction and fantasy and pop culture television. So there’s that part of my existence and identity, both as Native and as a nerd, that’s always been drawn towards that medium. But digging a little deeper, the idea of being able to couple images with a story, the imagery and the words is one way that we can undo a lot of this mystique, this pop culture misrepresentation and misinformation of Native people and Native identities.

So I think that coupling that with the images creates a counter-narrative. Plus, you can create scenes and images that are powerful and dynamic, that have iconographic features. Near the end of the book, when the Native folks rise up to meet their aggressor, you know, you can see that. When the Conestoga face their final moments, and they’re facing the page, they’re facing the reader. You see in their eyes that they’re ready. They’re determined. They are unafraid.

This project was supported by the Library Company, one of the oldest libraries in the country. We know who has historically had access to certain kinds of records and histories, so how did you approach collaborating with this institution?

Francis: Too often we’re brought in at the end of projects to greenlight things. Like, “Hey, I’ve got some Native characters and we just want to make sure everything’s OK.” And sometimes it’s not OK. Sometimes it is OK. But the not OK usually is like, “Hey, there’s some things we need to change, some things you need to work on. And that tends to ruffle some feathers. And at the end of the project, we can’t really make a lot of changes. So Will [Fenton] wanting to draw us in at the beginning of the project and have myself and Weshoyot and, you know, Native writers, Native illustrators, Native publisher all the way across the board, was something that was refreshing for me.

Alvitre: From the very first field trips we went on, the very first meeting we had with the Library Company, [Will] introduced us to the building and the archive material. Some of his employees up in the print archive documents center pulled a selection of all the original cartoons that we were referencing from Day 1. So we got to see these old, archival, historical political cartoons, and we could literally touch them in the papers. And just to lay that out for us in such a respectful way, and it’s not something that you get often.

Alvitre, Francis, Fenton and advisers examine documents in the comic, which jumps through time nonlinearly and includes the research process.
CREDIT: Weshoyot Alvitre/Library Company of Philadelphia

I was just discussing work that my father had done in regards to trying to find and access archives of our tribal languages and just archeological paperwork. And when he was my age, he was basically shut out from academics and, you know, educational archives. Because back in the days, you had to have a Ph.D. or have some sort of credentials to gain access to the things. They were never openly shared with Native people. And once you had those credentials, oftentimes it took years and years and a lot of money that many people didn’t have to access those things. So I think that was one of the biggest, most amazing things of this project, was they were sharing these with us without any sort of hoops to jump through, sharing them openly to support the project.

I’m curious, generally, about who we tell histories for, especially indigenous history. Is that different when you’re thinking about a Native audience versus a non-Native audience? How do you approach that?

Francis: First and foremost, I will always say that I write for a Native audience. I spent years in education, I spent a decade plus working with kids from my own home community and people in my community and my family members. And so I’m always going to approach whatever I look at from that perspective. Now, that’s not going to say that I’m not touched by understanding the pop culture landscape and how that works. I write around those influences, or counteract those influences. So, for example, a big component that Weshoyot and I went back and forth talking about is that we did not want to see the incidences of violence. They are portrayed in a way that is very metaphorical, very artistic, because there’s too much of Native folks that are dead and dying, and the violence perpetrated against Native folks. We fetishize that violence. We fetishize that tragedy and Native tragedy. And I really want to get away from that. So even the book ends in a way that is, for lack of a better term, wistful but serious. In terms of this moment, we’re reflecting on history, where we’re walking the land in present time.

Now, that doesn’t mean that I’m not aware of all the folks that are going to read this. And this is essentially also an invitation. I want to make sure that there’s an access point for for non-Natives, for other relatives, for globally indigenous peoples to access this work in a way that we create that common story of tragedy, of sorrow, but also resilience and hope and resistance and determination to continue to live, to continue to be, to continue to exist.

Why is this history meaningful? And why is telling the stories that you tell important?

Alvitre: My goal is to shed light on these sort of dark, dusty areas that have been hidden intentionally due to the system being a little bit of a propaganda system against Native people. But also to learn from and humanize these incidents. I think we need to stop guilt tripping people over what happened in the past. And I think we need to acknowledge those things. I think through that acknowledgement, just by saying that, yes, it did happen, instead of hiding, that’s one step in a healing process. By people understanding these historical facts that happened in the founding of this country, it’s really going to give them a broader understanding of what it is to be an American in this day and age, and the things that had happened in the past so we don’t repeat them in the future.