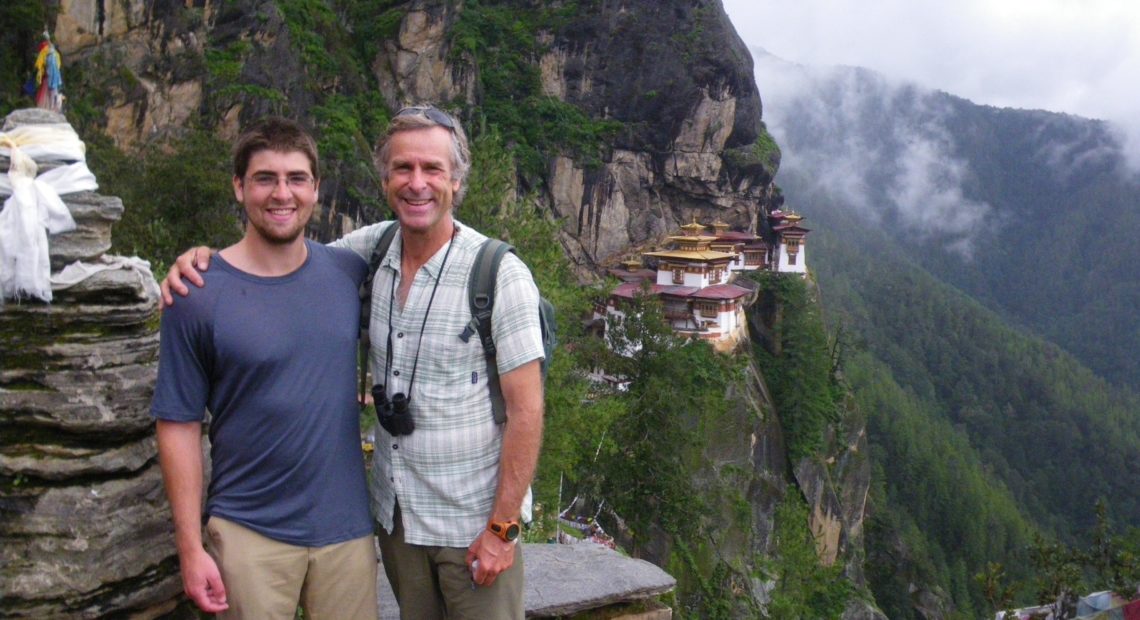 In New Book, A Father Recounts His Search For The Son Who Vanished In Costa Rican Wilderness

In 2014, wilderness explorer Roman Dial experienced every parent’s nightmare when he learned that his son, then 27, was missing in a remote Central American rainforest, thousands of miles away.

Dial, a professor of mathematics and biology at Alaska Pacific University, is known for his skills in mountaineering, rafting and backcountry endurance racing. He shared those passions with his son, Cody Roman, who went by the name Roman. Over the years, father and son embarked on exotic adventures together, once pack rafting in Australia, another time venturing into Arctic Alaska.

“He was a great outdoorsman,” Dial says of his son. “I kind of hoped that he would be an outdoors partner for me for life.” 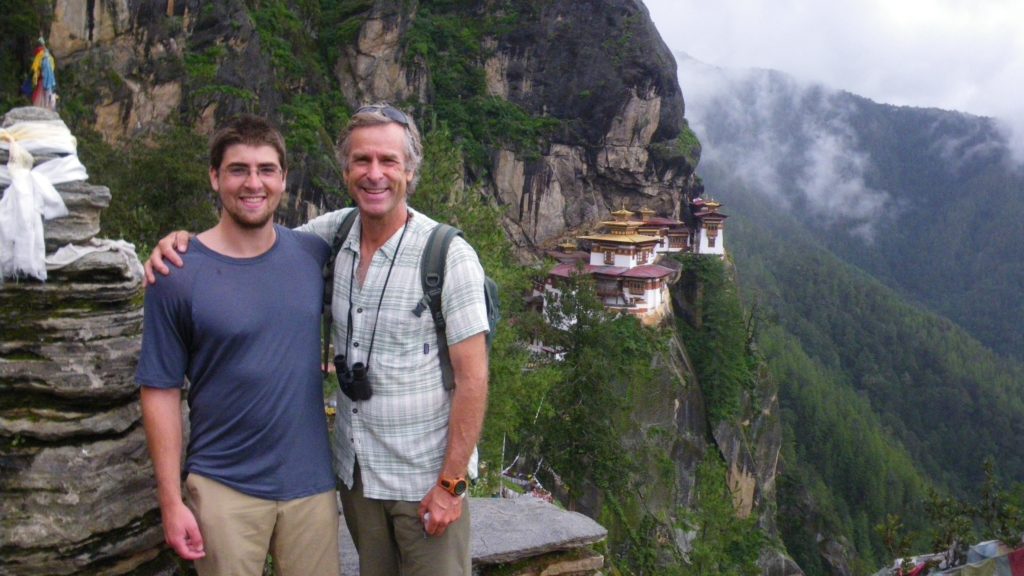 Roman Dial and his son Roman regularly took adventure trips together. “I kind of hoped that he would be an outdoors partner for me for life,” Dial says of his son. Courtesy of Harper Collins

In the months before he disappeared, the younger Roman had been exploring the jungles of Central America. The last email he sent to his father indicated that he would be traveling alone into the Osa Peninsula in southwestern Costa Rica for four or five days. When two weeks passed and Dial hadn’t heard from his son, he knew something was wrong.

“I was racked with a lot of feelings, like terror and guilt and urgency,” Dial says. “I got an airplane ticket to fly [to Costa Rica] the next day.”

Dial’s frantic search for his son lasted nearly two years, during which time he hired a private investigator, hacked through dense jungle and sorted through confusing, contradictory tips from locals. He even engaged with a reality TV crew to explore the possibility of foul play in the disappearance.

Finally, in 2016, a Costa Rican miner found Roman’s body in the jungle. “It was in a shallow canyon that was only about half a mile from where I’d camped multiple times looking for him,” Dial says. There was no sign of foul play.

Dial’s new book, The Adventurer’s Son, is an account of his search for Roman, as well as a reflection on the risks of extreme wilderness adventures.

I called the embassy and I said, “My son is missing,” but I wasn’t hoping they were going to do anything. I wanted to go down there and do everything that I could. I thought it was my responsibility, not theirs. When I got there, I discovered that they weren’t even looking where I said he planned to go. They were pursuing this lead where somebody had seen my son, they claimed with this local drug dealer [Pata de Lora] walking on a trail outside of the park, and that just didn’t add up to me. My son’s been sending these emails for months about these wild adventures he’s been going on, and he’d said explicitly that he eschewed guides, and here he was with a guide on a tourist trail outside of the park? It just didn’t add up. But everybody treated me as if I was just a typical parent who didn’t really know their child.

On imagining the perils his son faced in the rainforest

My Ph.D. is in tropical rainforest ecology and I’ve done research in jungles in Asia, in Australia, Central America and South America, and so I was aware of the hazards in the jungle. I could imagine that he was bitten by a snake. … You can see a poisonous snake once every few days, practically. … There’s the great big bushmaster and there’s a little palm viper — a little short little viper that hangs from bushes about eye level, and people tend to get bit in the face or the neck by these things. … 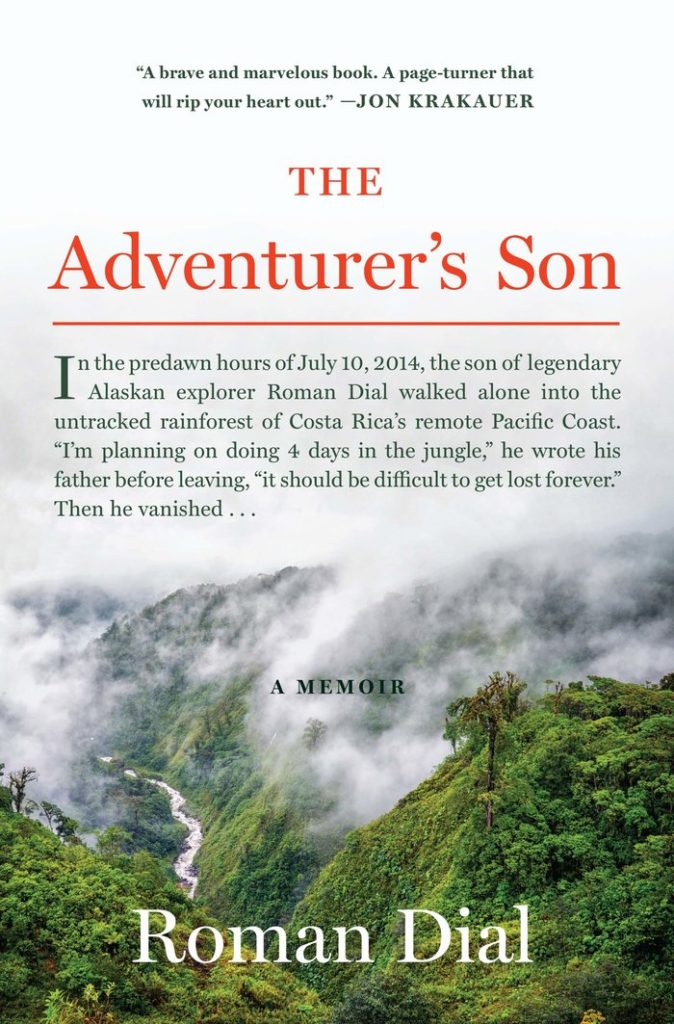 The Adventurer’s Son:
A Memoir by Roman Dial

I thought he could have slipped, because he’s off trail. He could have slipped and broken a leg and he could have sepsis, because things go bad when infections happen quickly in the tropics. … I’ve been in the rainforest enough to realize that when it rains and the wind blows, that trees fall down and it becomes very dangerous. Then there was also the possibility [of foul play], because this place [is] lawless. [There are] people moving drugs, it’s got people mining for gold. And once you break one law, it’s easier to break other laws, so there was also the possibility of foul play.

There were three cameramen and bright lights … [the investigator said] “Look, this is really hard to tell you, but we found out that your son was abducted by miners and then he was murdered.” And then he paused. He said, “This is the hardest part to tell you. He was dismembered and fed to the sharks in the ocean.” And it was all predicated on the Pata de Lora [drug dealer] story. …

I was just shocked because here I had come down and I signed up for this TV show hoping that they would be able to help me, but instead, all they had done is sort of staged this really dramatic moment … with the cameras rolling, they had this expert investigator tell me that my son had been murdered and dismembered and fed to sharks. And all I could think of is, “Oh, no. Another Pata de Lora story. This is not this is not the guy that I want.” So it felt really exploitative right there.

On learning that his son’s body had been found

The consul general at the embassy … said, “Roman, a body has been found near Dos Brazos, and we think it may be your son. There was some camping gear there.” … I fly down to Costa Rica immediately. I want to get to this site before they start bringing stuff up. And the next day … the embassy sends me some texts and it’s their photographs of the equipment that they’ve found at the site. And sure enough, it’s all my son’s stuff. I’d made a poster of equipment that he would have had, like a reward poster. There were the green shoes that I put on the poster. And there was the sleeping pad that was yellow on one side and silver on the other. There was that in one of these photographs. And there was the backpack that I’d found that he’d bought in a North Face store in San Jose. … There was a blue headlamp that I’d given him in Anchorage. And there was the compass that I’d given him in Anchorage. And there was his stuff. And it was him.

On what he believes happened to Roman

[The forensic anthropologist] said, “We looked at the bones and there’s no sign of trauma. There were no machete hack marks on the bones. There were no bullet fractures.” … It seemed like he hadn’t been murdered. I can’t see why somebody would have murdered him in the bottom of this canyon. It looked to me like maybe a tree had fallen on him or one of the rangers said they thought that a snake had bitten him because they found a fer-de-lance [snake] down there, and fer-de-lances, they live in the same area, small area their whole life. They don’t go very far.

I’ve never been much of a soloist myself. I’ve done some solo trips, but I don’t enjoy them that much. I’d rather share things with people. … But what this whole … process has shown me is that for 40 years I was extremely selfish in that I would go out and do risky things because it was a thrill that made me feel good, and I never really realized that when we die we’re dead and we don’t feel anything. And the people we leave behind, the people who love us the most, those are the people who hurt the most.

Sam Briger and Thea Chaloner produced and edited the audio of this interview. Bridget Bentz, Molly Seavy-Nesper and Meghan Sullivan adapted it for the Web.