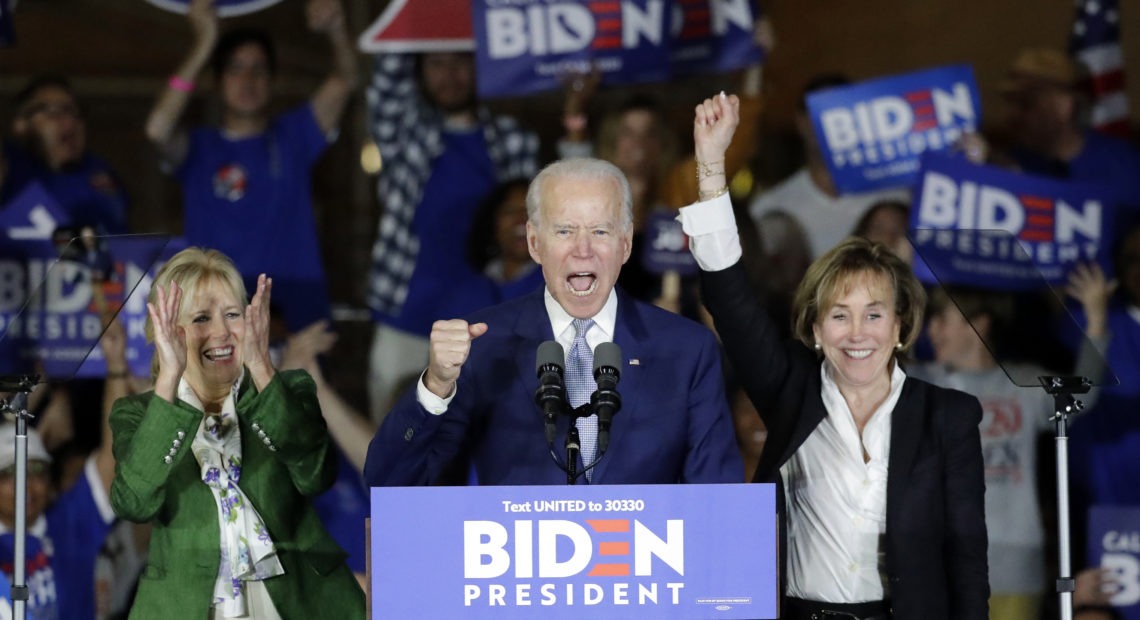 The Democratic presidential contest is now a two-man race.

Vermont Sen. Bernie Sanders went into Super Tuesday the front-runner, but it was Joe Biden’s night. The former vice president rode a surge of momentum out of his big win in South Carolina on Saturday and established himself squarely as the principal alternative to Sanders.

Biden won a majority of states, including Texas, Tuesday night. Sanders is projected to win California, but with votes still being counted there it’s unclear which candidate will emerge with a delegate lead.

That sets up what looks to be a sharp fight over the next two months between candidates with very different ideologies — Sanders paints in bold colors and wants radical change; Biden believes in progress accomplished by working with Washington’s competing interests. 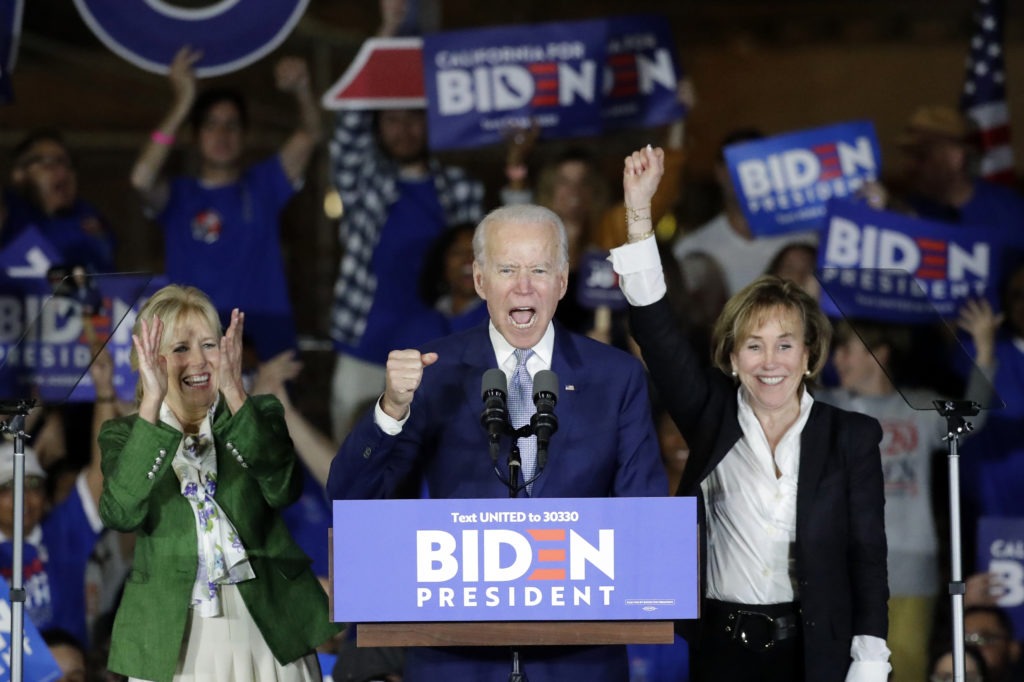 Joe Biden speaks at a campaign rally in Los Angeles with his wife Jill and his sister Valerie. The former vice president rode a wave of momentum that may have catapulted him back into front-runner status. CREDIT: Chris Carlson/AP

Later, an ebullient Biden swatted at Sanders. “People are talking about a revolution,” he said. “We started a movement.”

Here are five takeaways on why Biden did so well on Super Tuesday and where the race stands now:

1. Biden and Sanders have distinctly different bases of support

Exit polling revealed Biden “did well with moderates and conservatives, voters older than 45 and African Americans,” according to The Associated Press. In Alabama, for example, Biden won nearly 70% of African American voters, who are a majority of the state’s Democratic electorate.

Sanders showed strength with liberal voters, Latinos and voters younger than 30, according to the AP. In California, Sanders won nearly half the Latino vote — double Biden’s share — which makes up 30% of the state’s voters.

Black and Latino voters are pillars of the Democratic Party. Whoever becomes the nominee needs to have their strong support.

And don’t forget about women. They powered Democrats’ 2018 takeover of the U.S. House of Representatives. The AP reports Biden “enjoyed an advantage among women and college graduates.” The Biden campaign and the superPAC supporting him are confident that they are in particular winning over women older than 40.

Sanders may have expanded his coalition in the Nevada caucuses, but the breadth of his support looked awfully limited on Super Tuesday. It’s hard to see how he regains his momentum and expands beyond his loyal base after Tuesday night.

Going on TV and talking about how he’s running against the Democratic Party establishment makes it hard to win over people who have proudly voted Democratic for a long time. Even if Sanders doesn’t need establishment party leaders, he needs the party’s loyal voters. Sanders has done very little to mollify and reach out to them.

Biden clearly picked up support from many of those kinds of voters after Minnesota Sen. Amy Klobuchar and former South Bend, Ind., Mayor Pete Buttigieg dropped out and endorsed him. 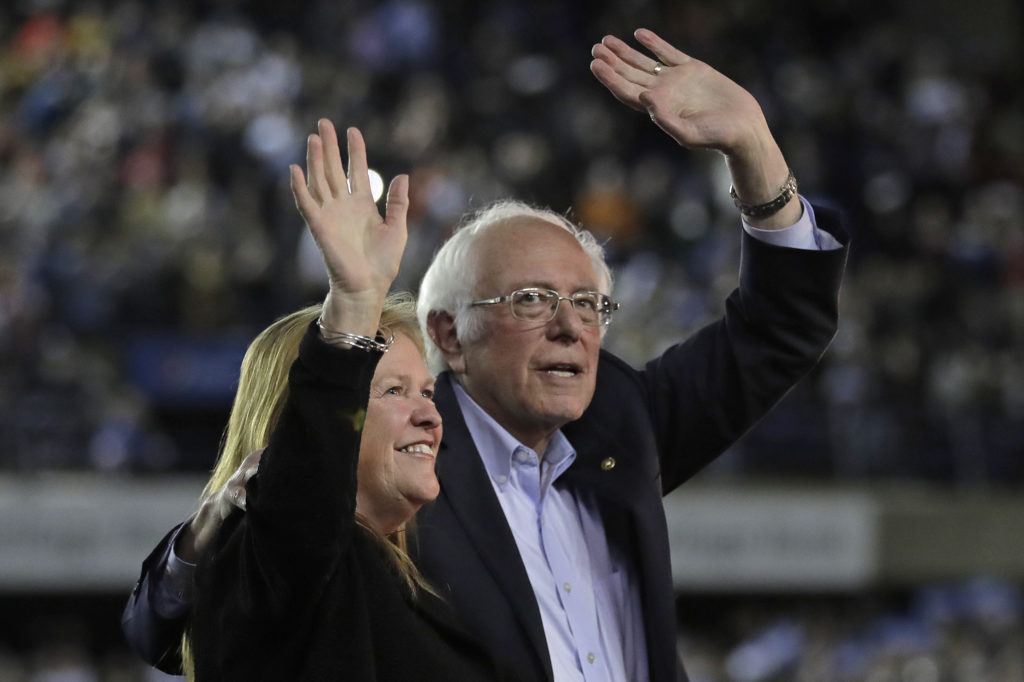 Sanders’ hope has to be that he gets a boost from Massachusetts Sen. Elizabeth Warren, who had another disappointing night, finishing third behind Biden and Sanders in her home state. But she did gain delegates in almost half a dozen states Tuesday night.

Warren hasn’t shown much sign of giving up the fight and has already traveled to post-Super Tuesday states. There will likely be pressure on her from progressives to back out and support Sanders.

3. Young voters are not coming out in droves

“We are going to defeat Trump because we are putting together an unprecedented grassroots, multigenerational, multiracial movement,” Sanders said Tuesday night.

But Sanders’ actual younger-than-30 turnout isn’t quite living up to that promise. While Sanders is winning big margins among young voters, they aren’t making up significantly higher shares of the electorate than in past elections.

Before Tuesday, voters younger than 30 were not keeping pace with the overall increase in voter turnout. In fact, young voters’ share of the electorate went down in three of the first four states compared with 2016.

On Tuesday night, not a single state saw an increase in young voters’ share of the electorate, according to exit polls conducted by Edison Research and sponsored by several of the television networks.

4. This campaign has already changed a lot — could it change again?

Biden appears to be favored in some big upcoming contests, including Florida on March 17 and Georgia a week later.

But polls have defined four different leaders at various times during this race. Biden has a reputation for being undisciplined, and his continued success is certainly a wild card.

A shift like the one that occurred this Super Tuesday, though, is unprecedented, and it may very well be that all those voters — three-quarters in most polls — who have said they could change their minds may have made them up.

If that’s the case, that would give Biden the inside track to the nomination.

No one in modern history has been able to ignore the first four state contests and win the nomination. Bloomberg had a plausible theory of how to do it — namely spending $500 million on his campaign.

But guess what? Hard-won momentum clearly trumped money. Voters were at first open to Bloomberg, but his debate performances doomed him. His favorability ratings tanked, so much so that majorities of Democratic voters said they had unfavorable opinions of Bloomberg in exit polls, while they had very favorable opinions of Biden, Sanders and Warren.

It’s not clear which states will go first in the next presidential nominating season, but it’s pretty likely no candidate will ever again try what Bloomberg did in bypassing the early states. If a guy with his kind of money spent this kind of fortune and came up short, it’s unlikely anyone will try it again.