4 Takeaways From Joe Biden’s Wins In Tuesday’s Primaries, As COVID-19 Reshapes The Race

Former Vice President Joe Biden scored decisive primary wins Tuesday over Sen. Bernie Sanders in the first round of voting since the federal government stepped up its response to the fast-spreading coronavirus pandemic.

Biden widened his delegate lead over Sanders, who now trails by several hundred delegates and is facing mounting pressure to exit the race.

But the voting process Tuesday was complicated by the public health crisis, which has upended all aspects of American life. Ohio, one of the four states that was scheduled to hold a primary contest Tuesday, has suspended voting until June. 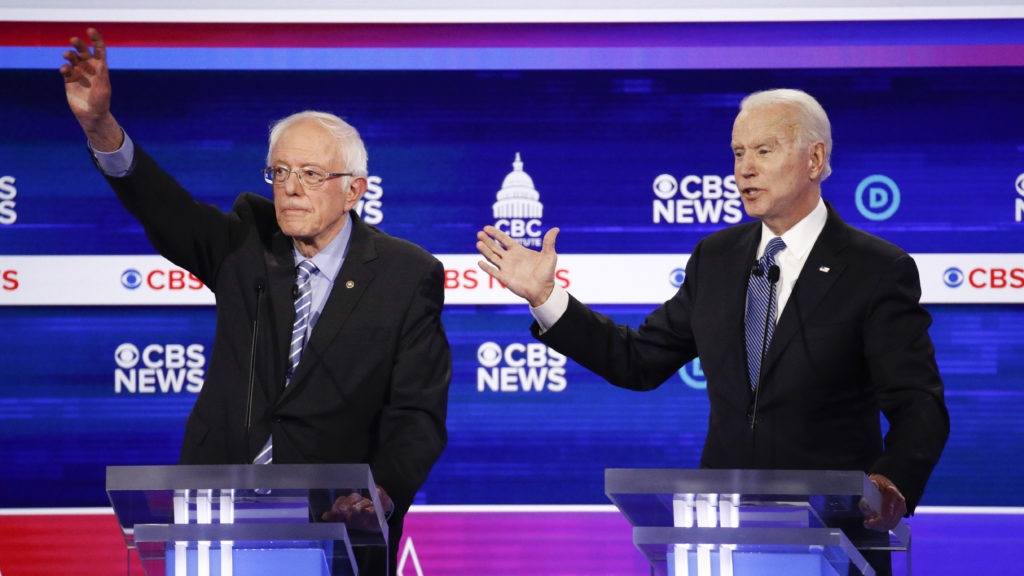 Here are key takeaways on Biden’s latest victories and the impact of the coronavirus on the election.

Biden is pulling away in the delegate race

Biden led Sanders in the delegate count by 898 to 745 before Tuesday. The former vice president’s decisive victories in Illinois, Florida and Arizona brought him one step closer to the 1,991 delegates needed to win the Democratic presidential nomination. In widening his lead, Biden has made it even harder for Sanders to catch up. Once Tuesday’s results are finalized, 2,311 delegates — or 58 percent — of the total number of delegates will have been awarded.

Going forward, Sanders would have to win a majority of the remaining nominating contests by wide margins in order to make up the deficit. That’s unlikely to happen, barring some major unforeseen twist in the race. Sanders has shown no signs of regaining his momentum from the first month of voting, when he finished a close second in Iowa and won New Hampshire and Nevada. The latest results underscored the Vermont senator’s ongoing struggle to expand his coalition beyond younger, more progressive voters.

Biden’s strong performance on Tuesday extended a winning streak that started with a victory in South Carolina in late February. Since then, Biden has dominated Sanders with nearly every key Democratic voting bloc.

Now, Biden still needs to win a majority of the delegates to officially secure the nomination. Sanders hasn’t dropped out. (Neither has Hawaii Rep. Tulsi Gabbard, the only other Democrat still in the race). The primary race isn’t over yet. But from here on, Biden is the presumptive nominee, and he has bolstered his argument that he can build a broad coalition capable of beating President Donald Trump in November.]

Trump started the year with unusually low approval ratings for an incumbent president seeking reelection. He is now contending with a fast-moving public health crisis that could spark an economic recession, further complicating his prospects in November. And Tuesday’s victory for Biden in Florida suggested the former vice president could be a formidable opponent in a key battleground state in the general election.

Primary turnout and results aren’t necessarily good predictors of what happens in a general election. But they do provide a sense of voters’ enthusiasm. Biden has now scored impressive wins in Florida and other potential swing states, among them Virginia, North Carolina and Minnesota. Turnout in Virginia, Texas and elsewhere has gone up from 2016, suggesting that Democratic voters are motivated to get Trump out of office.

Does that mean Biden can replicate this in a general election if he carries the nomination? That remains to be seen. But the results Tuesday are a warning for the Trump campaign that the president could have a fight on his hands in the states that will decide who wins.

The Sanders campaign has signaled for more than a week that winning the nomination is increasingly unlikely. The question now is, how long will Sanders stay in the race, and if he decides to drop out soon, will he push Biden or the Democatic National Committee to adopt parts of his policy agenda?

Sanders did not change his message during the debate Sunday or hint at a possible exit from the race. But in an address Tuesday before the polls closed, Sanders floated a long list of public health proposals related to slowing the spread of the coronavirus. The move was a potential preview of other policy plans Sanders could push for while he still has leverage as a presidential candidate with a large political following.

The coronavirus could complicate Sanders’ 2020 exit strategy, however. In 2016, Sanders stayed in the primary race long past the point when he had a realistic shot at winning the nomination. By not dropping out until the summer, Sanders was able to win concessions from the Democatic National Committee on the rules governing the nominating process. He also pushed the party to the left on health care and other issues.

It will be harder for Sanders to wage a political fight now, in the midst of a pandemic that has overshadowed electoral politics. Sanders ran into that challenge at the debate, when he tried scoring political points even as Biden kept the focus on combating the virus. In the coming days, Sanders may find that the broader Democratic electorate has less appetite this time around for a lengthy political fight ahead of the general election.

The coronavirus will complicate the rest of the primary season

Four states were scheduled to hold primaries Tuesday, but only three went through with voting after the governor of Ohio suspended the state’s nominating contest over concerns about the coronavirus. The decision by Ohio Gov. Mike DeWine, a Republican, to delay the state’s primary highlighted the challenges of holding elections during an outbreak of a new infectious disease.

READ MORE: How postponing primaries for COVID-19 could complicate the 2020 race

On Monday, the Centers for Disease Control and Prevention recommended an eight-week ban on gatherings of 50 or more people. The White House went a step further, suggesting people avoid gathering groups of 10 or more. The CDC guidance to avoid large groups runs through mid-May. Between the next round of voting next week and mid-May, 11 states and the U.S. territories of American Samoa, Guam and Puerto Rico are slated to hold Democratic or Republican primaries or caucuses.

Will more states follow Ohio’s lead and delay voting? Or will they opt to do what Illinois, Florida and Arizona did Tuesday and proceed anyway, knowing that it is impossible at larger in-person polling locations for people to avoid gatherings that exceed the CDC guidelines?

One option may be for states to encourage the use of mail-in ballots, which would allow voters to follow social distancing practices while still participating in the electoral process. That could help. But any adjustments this late in the primary season will also undoubtedly sow confusion, and could result in lower turnout. No matter what happens, Tuesday made clear the pandemic will complicate the rest of the primary race.