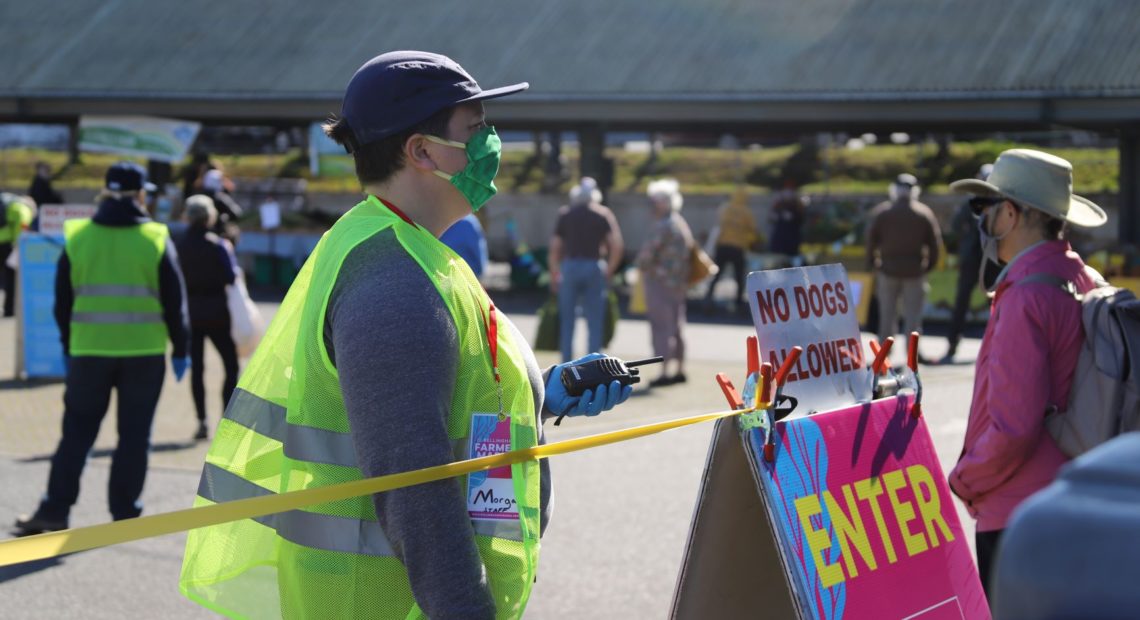 NOTE: Scroll to the end of this story for a list of Inland NW markets and their opening dates.

Jordan Dyck grows a lot of produce on his three-acre farm in North Idaho.

“We got a lot of lettuce crops, tomatoes,” Dyck sayd. “A lot of root crops. Fair amount of sweet corn.”

Dyck owns Homestead Produce, which is “about a mile north of Three Mile” in Bonners Ferry, he says, referring to a well-known “corner.”

This time of year, when he’s not farming, he’s selling his produce at the Bonners Ferry Farmers Market, which opens Saturday, April 25 — the first to open in the region.

But this year is different.

Dyck will be there, but state and nationwide orders and recommendations to slow the spread of coronavirus by practicing social distancing and shutting down non-essential businesses have taken a toll on the region’s farmers markets.

What was something of a social event is going through a “cultural 180,” says Colleen Donovan in Ellensburg, executive director of the Washington State Farmers Market Association.

While some elements of a farmers market are allowed — selling food and soap — other parts are not considered an “essential business” under Washington and Idaho’s orders. That means no more live music. No more kids’ activities. No seats. No touching the produce.

“It means a lot more of sanitize-able surfaces,” Donovan says. “So all of the charm of the burlap tablecloth and wooden box are going to be substituted with really washable products and plastic and all that good stuff so everybody can be as safe as possible.”

The market in Bonners Ferry, Idaho, is no exception.

“The farmers market is able to continue with the essential vendors: soaps, foods, produce. We’re going to be missing a lot of craft vendors. So, yeah, it’s going to be a very different start to the year,” says Dyck. “We’re seeing how it goes. It’s uncharted water for all of us.”

Many other farmers markets in the Northwest haven’t been as lucky.

About half of the 110 markets in Washington delayed opening, according to Donovan. Still more are considering pushing back the opening date while they wait for more guidance from the state.

And those that did open, or were already open when the coronavirus emerged, have seen a much smaller crowd show up. Market directors are reporting that about 20% of customers are making it to the farmers market so far this year, and they only have about one fifth of the usual vendors to buy from. 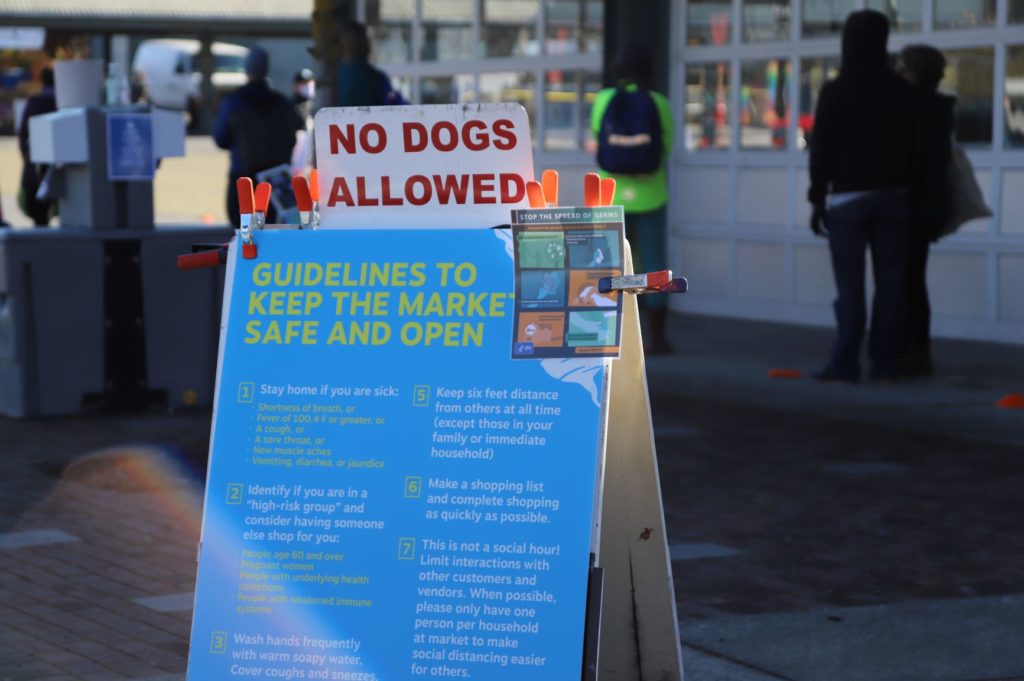 “When the coronavirus emerged, and it was clear it was going to have a strong impact on farmers markets, the only ones open at the time were on the westside, so they’ve really been on the frontlines of figuring how to respond and what it would mean for farmers markets,” Donovan says. “The good news is that in eastern and central Washington, the farmers markets have been able to have a bit more time to prepare, and to learn from what’s happening in western Washington.”

“A really important … part of our economy”

She helped form the Inland Northwest Farmers Market Association in 2017, which brought together individual markets in Spokane County, as well as in Chewelah and Colville.

The association helps run programs like Food For All, a partnership with Catholic Charities of Eastern Washington that delivers locally grown produce to low-income and elderly people. In 2018, the program delivered 24,000 pounds of food to those in need.

Goldsmith says it’s programs like these that show the importance of farmers markets, but noted their role in the larger economy. In Spokane County, farmers markets gross over $1 million a year.

“It is a really important, viable part of our economy,” Goldsmith says.

And while far fewer customers are showing up to the markets, Goldsmith says they’re spending more money.

“There’s been a tremendous support for local food and supporting farmers. Some of the farmers on the west side of the state, despite the fact that there’s a quarter of the shoppers that are there, they’re seeing some of their top numbers” for sales, she says.

Goldsmith, who admits she’s no scientist, says she thinks people feel safer shopping for locally grown products in the fresh air, rather than for items shipped halfway around the world to a grocery store.

“Personally, I would much rather go to an open air market that has some safe distance between people and purchase something that I know has been handled the very least,” she says. “We’re not talking about produce that has been handled across the country let alone several countries, packaged, moved, transported. This is literally food that has gone from the field to a farmer to your hands.”

The farmers market in Moscow, Idaho, was supposed to open this Saturday.

The market is among the region’s largest and most popular. About 10,000 people came to the market on an average Saturday last year, according to Amanda Argona, who runs the market as the city’s community events manager.

But after Mayor Bill Lambert and the city council extended a local emergency declaration to May 5 — three days after the market’s opening day — the market pushed opening day back a full month, to the first Saturday in June.

“We just need time to get the word out to the public about the changes happening to the market,” Argona says.

Those changes include empty stall spaces between each working stall, visual cues on the pavement about social distancing and requiring face masks be worn by vendors.

The market will also supply gloves, hand sanitizer and alcohol wipes for vendors.

And like all other farmers markets, Moscow’s will limit vendors to those who primarily sell fresh, perishable agricultural items.

That means the 145 vendors the market usually has during high season has been whittled down to 45. 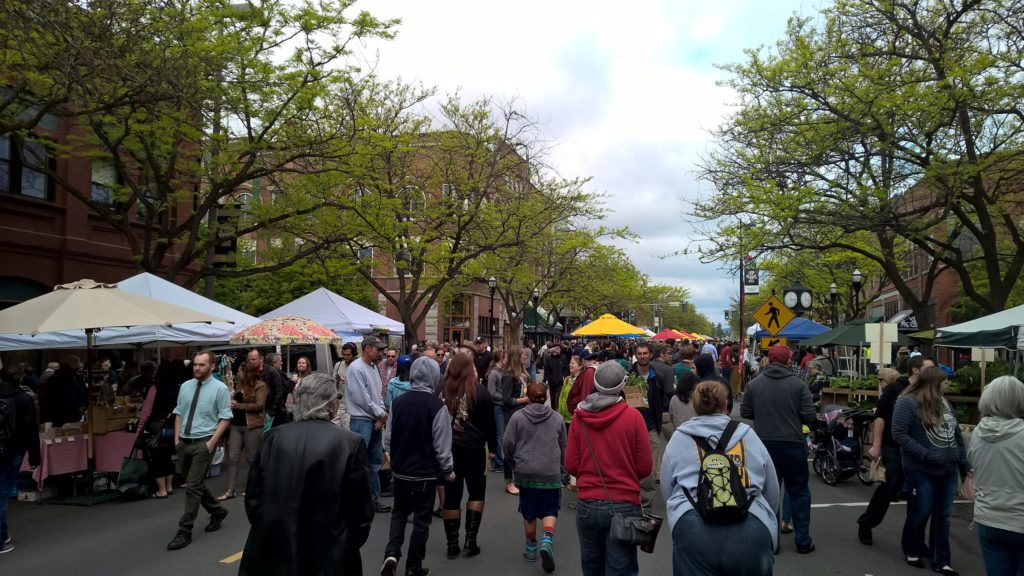 File photo. The Farmers Market in Moscow, Idaho is among the region’s largest by vendors and attendees. It will look different in the coming months — like all markets. CREDIT: Jeremy Segrott from Cardiff, Wales, UK / CC – TINYURL.COM/MOSCOWMARKETPIC

Argona says the city is monitoring the situation daily, so the rules may change through May. But she warns that bad practices at the market could lead to it being shut down, like what happened in Brentwood, California, when it allowed in too many people.

“We just need customers to follow the rules,” she says.

The market in downtown Walla Walla, Washington, was also supposed to open this Saturday.

But after talking to city and public health officials, the market’s board pushed opening day back a full month, to the first Saturday in June.

“It was made with the caveat that things are changing. If it’s possible to get going earlier, we will,” says Kathryn Witherington, executive director of the Downtown Walla Walla Foundation, which runs the market. “We’re just doing the right thing for our community and our vendors.”

Donovan says her organization has put together guidelines for how to best run a market, recommendations that farmers markets around the country are following.

Like any other workplace or public space, people are told to stay away when they’re sick. Strict social distancing will be applied, including monitoring how many people come to the market, and how close vendor stalls are located to one another.

Sanitation rules have been amped up, and the number of hand washing stations will increase.

“This takes cooperation for everybody,” Donovan says. “Shop efficiently, come prepared, wear your masks. We still love everybody, but we’re going to ask people to be as efficient as possible for the safety of everyone.”

As Donovan suggests, farmers markets have always been about more than shopping. People come to talk and meet, and connect to their community.

But in the end, it is about commerce, and markets and vendors are finding new ways to sell their product.

In Moscow, the city is planning to open a City Hall location for customers to pick up orders they placed online. 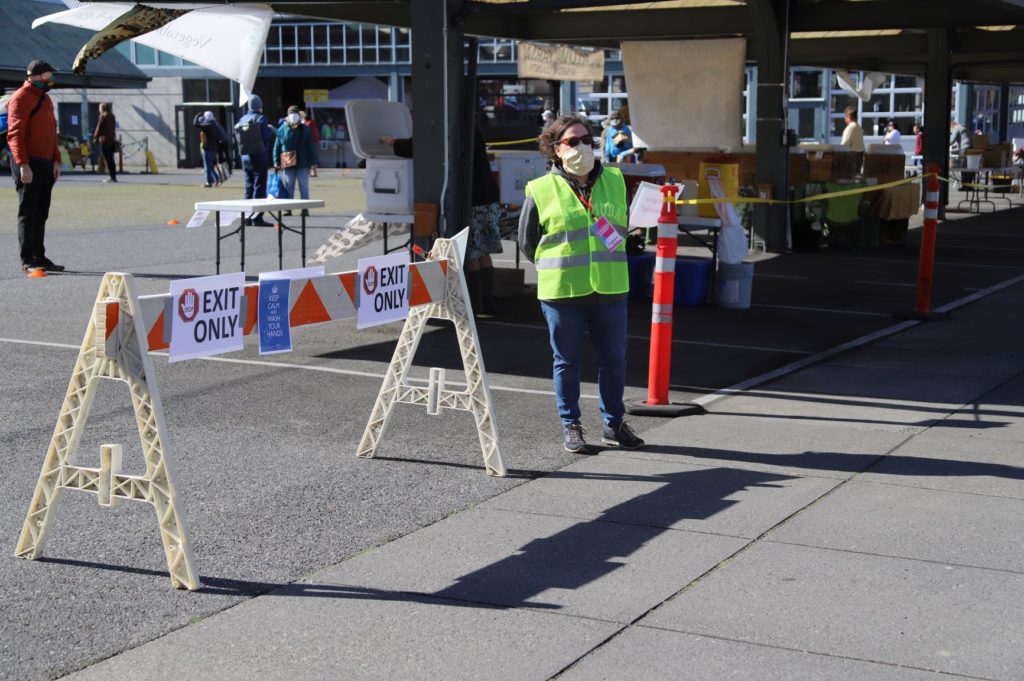 Bellingham Farmers Market board member Barbara Govednik monitors the new market exit to limit the number of people in the market so that physical distancing is maintained at all times. CREDIT: Washington State Farmers Market Association

The same goes for Walla Walla, where vendors have seen online sales and pick-up orders increase. Witherington says she’s building an “online farmers market,” which will take visitors to individual vendors’ sites. She’s also trying to create a centralized pickup location so people don’t have to trek to individual farms.

These practices originated in the Puget Sound region, but quickly moved east.

It’s unclear if they will be enough for farmers, whose sales at farmers markets form the financial footing for the rest of the year. They depend on that face-to-face contact as a primary route to get their products to customers.

And, Donovan says, people depend on it as a way to connect to where their food comes from. She says that more than 1,000 individual farmers sell about $55 million worth of goods at farmers markets in a typical year. Some of Washington’s larger markets see up to 100,000 customers annually.

“They’re a really strong and important economic engine,” Donovan says. “For millions of Washington’s, that’s their only real interaction with their food, and where it comes from.” 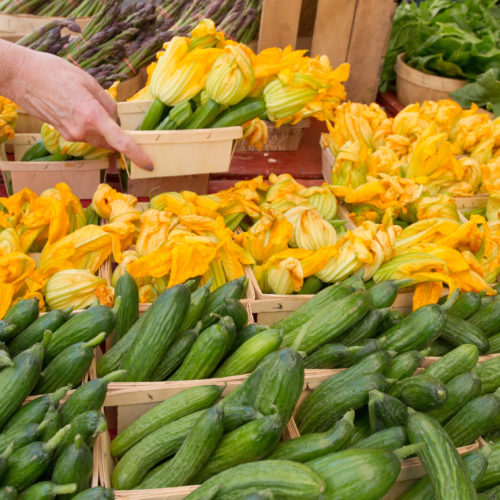 Market Saturation: Why So Many Farmers Markets Are Failing

Farmers aren’t producing enough to keep up with the number of smaller markets that keep popping up, often in close proximity to others. This results in fewer customers, unsold food and maybe closure. Continue Reading Market Saturation: Why So Many Farmers Markets Are Failing 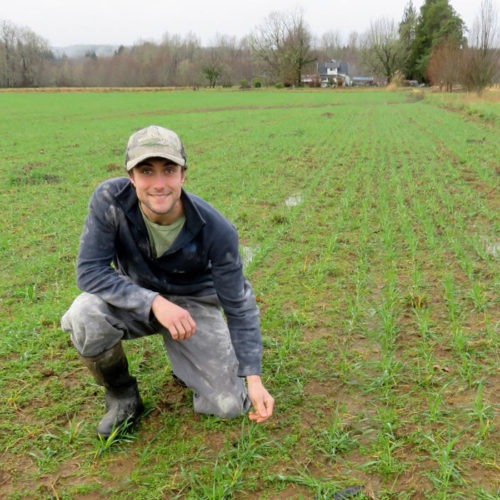 Where’s The Wheat? Bringing Grains Back To The ‘Wet’ Side Of The Cascades

Nowadays the vast fields of grain in eastern Washington, northeastern Oregon, and north Idaho feed the world. But once upon a time—1825 to be exact—the first crop of wheat in the Northwest was planted at Fort Vancouver. Continue Reading Where’s The Wheat? Bringing Grains Back To The ‘Wet’ Side Of The Cascades