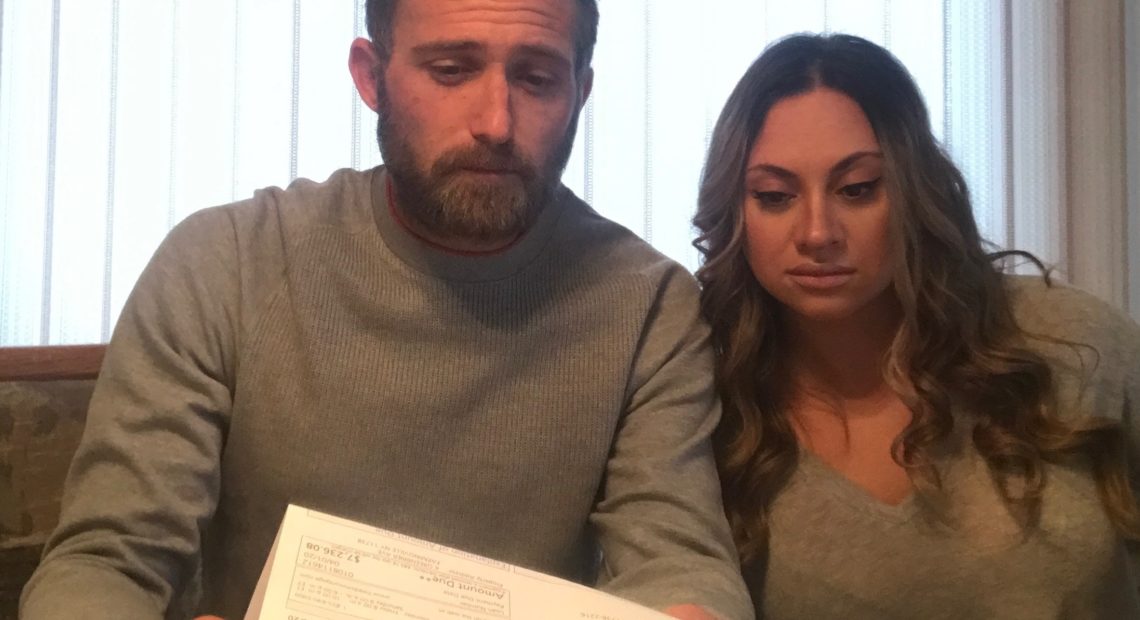 3.4 Million Homeowners Skip Payments. But Many Are Scared, Say Congress Needs To Act

Jasmine Esposito-Gullo lost most of the income she makes arranging concert tours for musicians. The coronavirus pandemic has shut down those tours. Like many other homeowners, she says her lender told her that if she skips mortgage payments on her Long Island, N.Y., home — as Congress says she can — the consequences will be punishing. 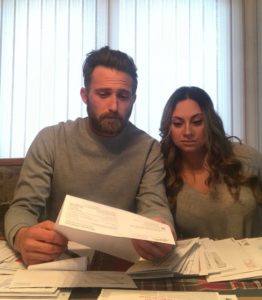 Frank Gullo and Jasmine Esposito-Gullo can’t pay their bills and the mortgage on their house on Long Island, N.Y., after she lost most of her income and he had his hours cut back because of the pandemic. Their lender told them that if they skipped payments, they’d have to make a giant balloon payment to catch up. CREDIT: Courtesy of Jasmine Esposito-Gullo

“You know, it stresses us out,” she says. “It’s like a black cloud hanging over my head.”

More than 3.4 million homeowners are temporarily skipping their mortgage payments because they’ve lost income during the pandemic. Under the CARES Act rescue package passed by Congress, affected homeowners can skip or delay payments for up to a year.

Esposito-Gullo’s husband, Frank Gullo, works for the Long Island Rail Road, which cut back his hours. Even with Esposito-Gullo’s unemployment money, the couple says they’re still making thousands of dollars less a month. So they called up their lender, Freedom Mortgage.

“They told me, yes, you can skip three months’ payments,” Gullo says. “But then they told me there was a balloon payment at the end of it.” He was told that after three months, they’d have to come up with all the money for those skipped payments. So they’d suddenly owe four months of mortgage payments all at once — $14,000.

“It’s impossible,” Esposito-Gullo says. “This pile of money is just going to magically appear from somewhere?”

Gullo says it made no sense to him just how this was supposed to help anybody in the middle of the pandemic. “If everyone’s lost their job at this point,” he says, “how is that helping? That’s doing the exact opposite. That’s putting people in further debt once we get out of this.”

Meanwhile, Gullo has already had to use some of his 401(k) retirement money to pay bills.

And the couple is not alone. Lynn Daniels, a massage therapist in Brighton, Colo., says she and her husband both have lost basically all of their income. And she says her mortgage company, which is called Mr. Cooper, told her much the same thing about the balloon payment.

“It took my breath away,” says Daniels, “that this was so unhelpful being unemployed. Where would I come up with that kind of money?”

Lenders demanding giant balloon payments is not how this program is supposed to be working. Under the admittedly complex rules from various regulators, there’s actually a much better option to make up the missed payments. And some other homeowners are being told they can get it.

“In the vast majority of cases, what should happen at the end of the CARES Act forbearance period is that homeowners should be given the opportunity to have those missed payments put on the back end of their mortgage,” says Diane Thompson, a former attorney with the Consumer Financial Protection Bureau.

That means when you get back on your feet financially, you can just return to making your regular monthly mortgage payment — your payment doesn’t go up, and you don’t get socked with a giant bill that you can’t afford.

Thompson, who is now working with the National Consumer Law Center, says Congress should make this the default option that homeowners get automatically.

She says that this would fix the current situation, where the repayment method gets determined months down the road when the homeowner is ready to resume paying. Tacking the payments on the back of the loan is what should happen for most borrowers if the mortgage companies follow the rules, she says. But that leaves a lot of painful uncertainty hanging in the air for people, especially when borrowers in the meantime are being told about possible outcomes that are wildly inappropriate for their situation.

These mortgage companies, known as loan servicers, have call center representatives working from home amid a pandemic and trying to deal with a complex set of rules for different types of loans. Clearly, many are making mistakes and giving borrowers bad information. 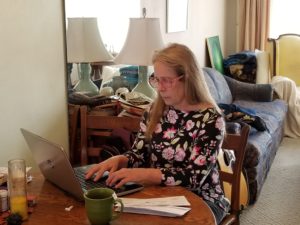 Lynn Daniels is a massage therapist in Brighton, Colo. She and her husband both have lost virtually all of their income. But her mortgage company still told her that it would demand a giant balloon payment after three months. “It took my breath away that this was so unhelpful,” she says. CREDIT: Courtesy of Lonny Lewis

Add to that bad incentives: Some housing advocates think some companies are intentionally trying to scare away borrowers because if too many skip mortgage payments, that creates cash flow problems for the mortgage servicers. It costs the servicers money and could even drive some out of business. The industry has been lobbying for financing help from the federal government.

“When servicers are telling homeowners that they have to make a lump sum payment, that’s contrary to the law and contrary to all of the guidance I’ve seen coming out from the various regulators,” Thompson says.

Freedom Mortgage says it is “fully complying with the CARES Act.” The company refused to discuss any particular case, citing borrower privacy. And it said it was prepared to offer “all options currently allowed by the various government agencies.”

But, again, some of those other options aren’t appropriate for the situation that most struggling homeowners find themselves in, and they sound terrible to borrowers.

The Federal Housing Finance Agency, which regulates Fannie Mae and Freddie Mac, says that borrowers in forbearance whose loans are backed by the two mortgage giants “are not required to repay the missed payments in one lump sum.” The CARES Act mortgage forbearance covers all types of government-guaranteed mortgages, or about 70% of all home loans.

The way the major banks are handling the issue appears to be a work in progress. For example, several weeks ago, Bank of America told NPR that homeowners could choose to have the payments added to the end of the loan. The bank now has a more complicated answer depending on what type of loan a customer has. But a Bank of America spokesman also tells NPR that the company won’t require a balloon payment for anyone who can’t afford it because they’ve been hurt financially during the pandemic.

Derek Reich, who lives in Washoe Valley, Nev., has lost all his income as a freelance video cameraman. He says his mortgage company, Mr. Cooper, first told him he had to make a big balloon payment. Then he was told it might be possible to modify the loan to move the missed payments to the back, but that wouldn’t get decided until he started paying his mortgage again.

Reich says the call representative also told him, “If you didn’t make a big lump sum and you didn’t qualify for modification, you’re going into foreclosure.”

“I am completely uncomfortable being at the mercy of the mortgage company at the end of this,” Reich says. “I don’t trust them. I mean, I get different answers every time I talk to somebody.”

Mr. Cooper, which has nearly 4 million customers, declined to discuss any particular homeowner but said in a statement: “We know this is a confusing and incredibly stressful time for many of our customers, and we are dedicated to supporting them and finding solutions.”

But Reich says that with his mortgage company talking about foreclosure and balloon payments, he doesn’t want any part of that. So he says he’ll do whatever it takes to pay his mortgage, even though it sounds like, financially, that’s going to hurt him badly. 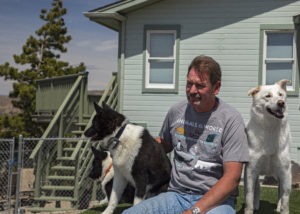 Nevada resident Derek Reich lost his income as a freelance cameraman. He says his lender told him he’d have to make up any missed payments in a giant balloon payment he can’t afford. Then he was told that if he didn’t qualify for a better option, “you’re going into foreclosure.” So Reich says he’s going to spend his 401(k) retirement money rather than get the help that Congress wanted him to have. CREDIT: Courtesy of Derek Reich

“My feeling … right now is I’m going to raid my retirement,” Reich says. “I don’t know how far I can go, because my retirement took a huge hit like everybody else when the stock market crashed.”

Thompson says people need to know what’s going to happen at the end of this break in mortgage payments.

“We absolutely need Congress to step in here, so that there’s a simple clear path,” she says. “The simplest, the easiest thing to do for people who’ve missed mortgage payments is simply to put those payments on the back end.”

That way, she says, Reich and lots of other homeowners wouldn’t have to be scared about being treated unfairly later and winding up in foreclosure. In fact, a bill was just introduced in Congress that would require lenders to tack the deferred mortgage payments onto the back end of the loan, extending the borrower’s repayment period.

A bipartisan group of state attorneys general is now also calling for much the same thing — allowing struggling homeowners to move the payments to the back of the loan term after the forbearance period.

And the CEO of the Mr. Cooper company, Jay Bray, tells NPR in a statement that he thinks making that the default option is a good idea too.

But so far, that hasn’t happened. At NPR’s suggestion, Jasmine Esposito-Gullo called back Freedom Mortgage, and she says this time she was told something very different — that it was possible that the couple could put the missed payments on the back end of their loan. But her husband, Frank Gullo, is worried.

“That means nothing, because I was told one thing by Freedom Mortgage and then five days later the person said they don’t know what I’m talking about,” he says. “Who’s to say they can’t flounder on us again? We have nothing in writing, and then we just get a bill for fourteen thousand?”

“Everything is in their hands,” he says, “so I’m nervous.”