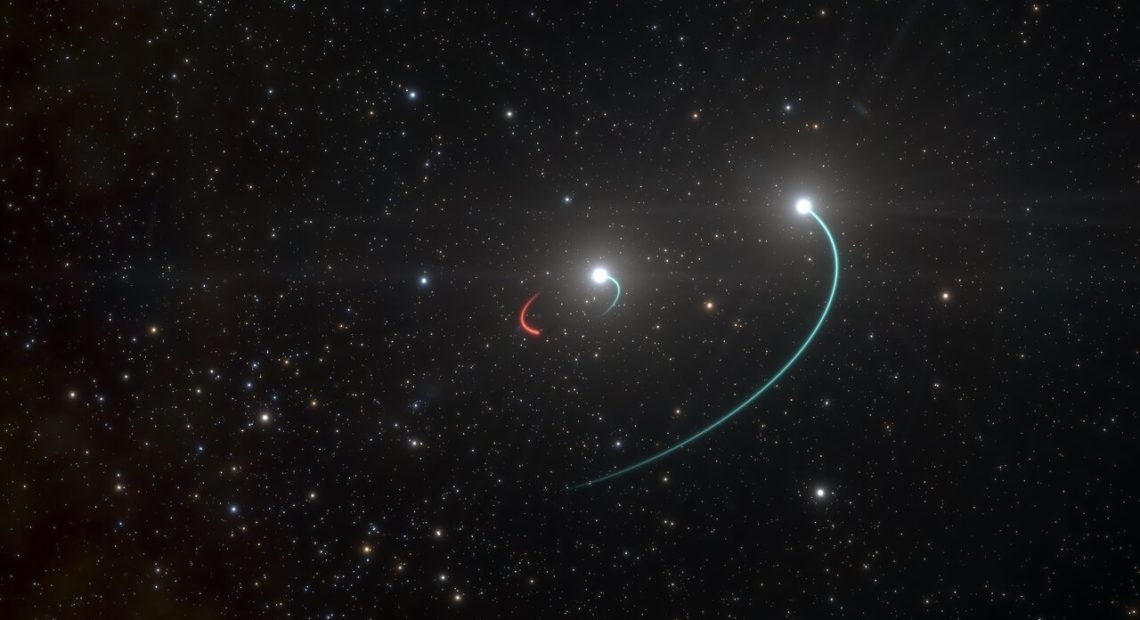 If it feels as if gravity has been tugging harder than it usually does the past couple of months, it’d be easy to guess why — what with the global pandemic, a hemorrhaging economy and the strain of staying at least six feet away from just about everyone. 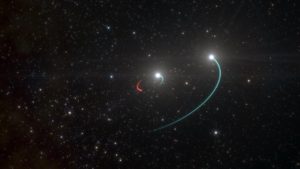 Scientists with the European Southern Observatory say system HR 6819, seen in this artist’s rendering, is composed primarily of two stars (orbits in blue) and a newly discovered black hole (orbit in red). The black hole is invisible, but it makes its presence known by the gravitational pull exerted on objects around it. CREDIT: ESO/L. Calçada

So perhaps it’s an appropriate time to add news of another impossibly dark, heavy item to the list.

The European Southern Observatory announced Wednesday that a team of astronomers has discovered the closest-known black hole to Earth, roughly 1,000 light-years away. They found it hiding in a double-star system known as HR 6819, where scientists say the black hole — rendered effectively invisible by gravity so strong that even light cannot escape — revealed itself in the curious orbit of the star nearer the center of the system.

“An invisible object with a mass at least four times that of the Sun can only be a black hole,” Thomas Rivinius, the Chile-based ESO scientist who led the study, said in a statement released Wednesday. His team published their findings in the journal Astronomy & Astrophysics.

The black hole is not anywhere near close enough for the average observer on Earth to feel its effects, to be absolutely clear. But it is close enough that, during winter in the southern hemisphere, the two stars that are believed to compose its solar system can be seen without a telescope as a single point of light in the constellation Telescopium.

The new discovery has unseated the black hole found in system A0620–00, which is located more than 3,000 light-years away in the constellation Monoceros — and which for years was the nearest black hole to Earth that scientists had identified.

Now, that does not mean these two huge — and hugely dense — stellar objects are the only ones to be found in the Milky Way, the galaxy humans call home. In fact, Rivinius described the discovery as merely “the tip of an exciting iceberg.”

“There must be hundreds of millions of black holes out there, but we know about only very few,” he explained. “Knowing what to look for should put us in a better position to find them.”

The key is that this black hole is relatively quiet. Many of the others that have been identified in our galaxy have been spotted because of the powerful X-rays they emit when consuming the material around them. This one, however, betrayed its location largely with the pull that it exerted on the innermost star of the system, which the team had been studying before stumbling on the invisible interloper.

Given the scale of that gravitational pull, if a star were causing it, the team would have expected to see it. The only convincing alternative, they concluded, was that they were watching the effects of a black hole.

And Marianne Heida, a co-author on the paper, says they’re already seeing signs of triple systems such as this one elsewhere in the galaxy.

“By finding and studying them,” she said, “we can learn a lot about the formation and evolution of those rare stars that begin their lives with more than about eight times the mass of the Sun and end them in a supernova explosion that leaves behind a black hole.”