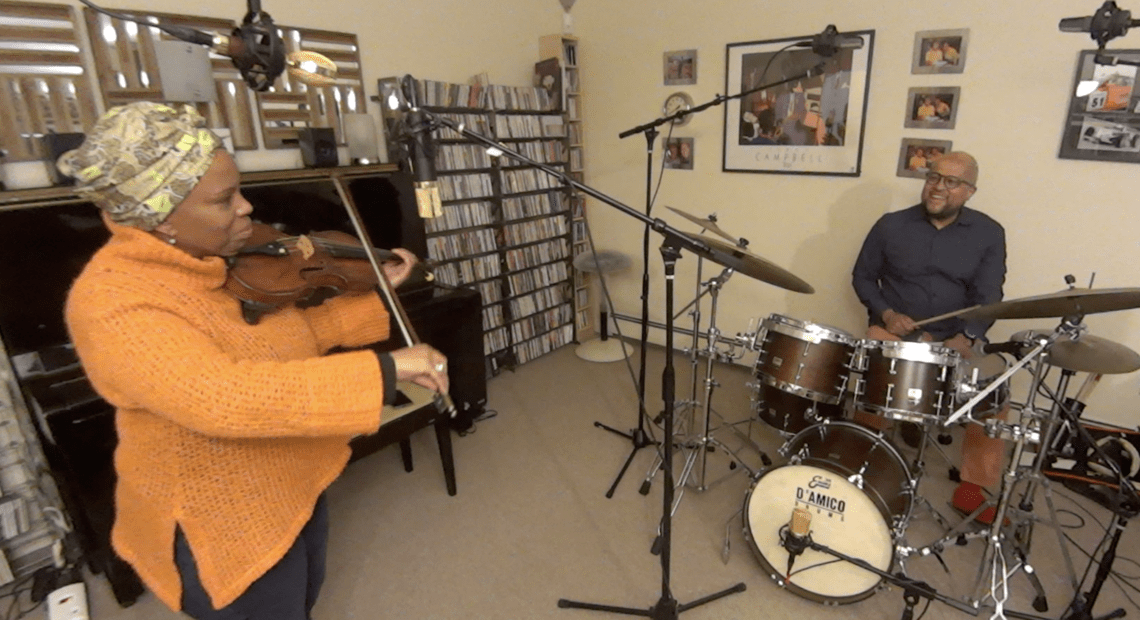 Drummer Alvester Garnett joined MacArthur “genius” violinist Regina Carter’s band in 1998. It was purely professional at first, but it soon grew into a romantic relationship; the couple married in 2004. “She’s the boss two-times over,” Garnett says half-jokingly.

They’re using this quarantine period to experiment together musically. “I actually feel that we are just beginning to scratch the surface of our creative partnership,” Garnett says. For this Alone Together Duet, they co-wrote a tune dedicated to both of their mothers called “Mabel and Grace.” The violinist recounts the story when both of their moms bonded one Christmas.

“We spent it with my mom, Grace, in Detroit. She was undergoing chemo treatment,” she says. “Alvester and I decided to cook Christmas dinner for the first time. My mom would come in and check to see what we were doing. I think she was afraid we might burn down the house. Unbeknownst to either of us, my mother was calling Alvester’s mother around every 20-30 minutes, giving Mabel updates on our ‘cooking situation.’ We cooked the turkey inside a well buttered paper bag, something neither mother had heard of. The dinner, to everyone’s surprise, was very delicious. After my mom passed, Mabel told us my mom said to her, ‘They call themselves in there, cooking. I don’t know what they are doing.’ We laughed so hard.”

Produced by Jazz Night in America and The Checkout from WBGO.