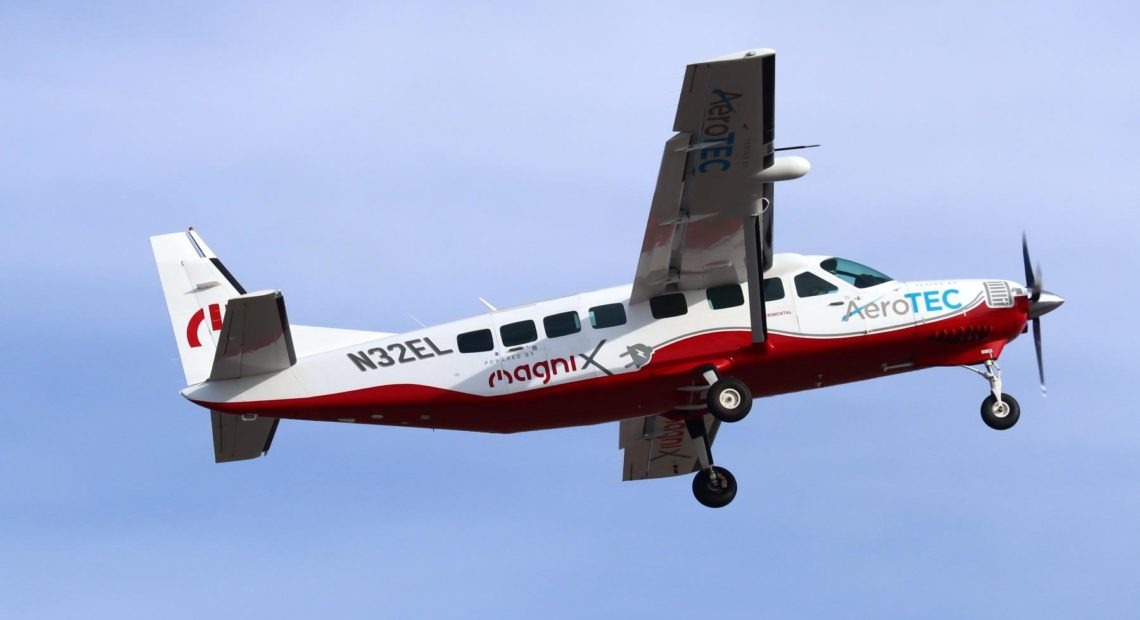 AeroTEC Chief Test Pilot Steve Crane wore his lucky ball cap — a USC Trojans cap — at the controls for the maiden flight on Thursday. He circled Grant County International Airport in Moses Lake for about 30 minutes before making a textbook landing.

“I have not been set on fire when I have had this hat. So, very important,” Crane deadpanned.

Crane said afterwards he wasn’t nervous in the cockpit given all the preparations before the milestone first flight. He said the electric motor gives some Tesla oomph to a plane with station wagon aura.

“It was very quiet and very responsive,” Crane said. 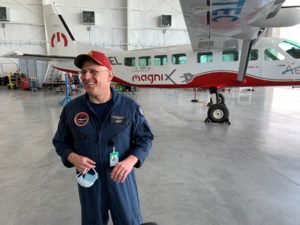 Test pilot Steve Crane was the only person on board the all-electric Cessna Grand Caravan during its first flight Thursday. CREDIT: Tom Banse / N3

The retrofitted puddle jumper plugs in to recharge like an electric car. AeroTEC CEO Lee Human said the demonstration proves electric flight is not some distant pipedream.

“We were able to show, ‘Look, this is real technology,'” Human told reporters gathered at his company’s Moses Lake hangar Thursday. “It is here today. It performs admirably. We met all of our test objectives.”

MagniX CEO Roei Ganzarski said the partners are aiming for FAA certification of the new propulsion configuration by late 2021. Ganzarski described the all-electric Caravan prototype as both a stepping stone to future brand new design electric airliners and a demonstration of a marketable fossil fuel-to-electric retrofit.

“There are a lot of operators that have existing planes that they love. They just don’t like the fact that the propulsion eats a lot of gas, creates a lot of fumes and creates a lot of emissions,” Ganzarski said. “Electrifying these existing aircraft allows an operator to get to market faster and cheaper than buying a new plane. However, there are range limitations.”

Ganzarski said the all-electric Grand Caravan has a range of about 100 miles. That represents a steep drop from the roughly 1,000 mile range of the conventional turbine-powered version. Recharging takes between 30 minutes to several hours, depending on the charger used.

Kenmore Air Director of Operations John Gowey said he is excited about electric aircraft development, but he added that the batteries need more improvement. Weight and space are at a premium in an airplane. Jet fuel has much greater energy density than current lithium-ion batteries. That’s why aviation biofuel research is being pursued in parallel.

“Right now as I understand, they don’t even have the range to do a 45 minute trip, much less turn around and come back,” Gowey said by telephone from Seattle. “So, it does come down to battery life and recharge time. But you know what? It’ll get there. It’s just not there yet.”

The coronavirus pandemic has set back the airline industry for the moment anyway. Many airlines are shrinking their fleets, not buying new things. 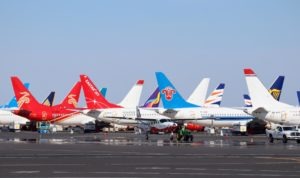 “Way back when, when I went to college — I went to college in Walla Walla — I used to take one of these small planes often,” Wulff said. “These days it’s not easy and not inexpensive to try to hop around the state or the region.”

“One of the big, practical use cases for these aircraft is to reconnect smaller communities that have been left behind over the last several decades,” as the airline industry consolidated around major hubs, Wulff said in an interview.

“When you look at the optimal distances for small, regional electric-powered aircraft going forward, that Moses Lake to Seattle distance is a real sweet spot,” Mueller said in an interview. “A plane like this, or a twin-engine version of that, might be exactly what we need to get air service back.”

Meanwhile, seaplane airline Harbour Air and MagniX continue flight testing in Vancouver, British Columbia, with a classic DHC-2 de Havilland Beaver converted to all-electric power. It uses the same 750-horsepower magni500 motor installed in the eCaravan. The refashioned, six-passenger seaplane made its first flight with electric propulsion in December. Regulatory certification to carry paying customers looks to be about two years away.

Financial and technical challenges facing the electric aircraft space were highlighted by the recent travails of two other companies. Suburban Seattle-based startup Zunum Aero, which had set its sights on launching a family of hybrid-electric regional jets, ran out of cash and laid off nearly all its staff last year.

In April, Airbus announced it was scrapping its E-Fan X project to build a hybrid-electric airliner. An Airbus executive said the plane maker and partner Rolls Royce determined they needed to reprioritize in light of the economic crisis facing the aviation industry.

The closest American competitors to the electrified Grand Caravan may be electric aircraft specialists Ampaire in California and Colorado-based Bye Aerospace. Both of those privately held startups are flight testing light, electric or hybrid-electric airplanes and have expressed ambitions to expand into the nine to 19-passenger short-haul commuter/air cargo market or air taxi services.