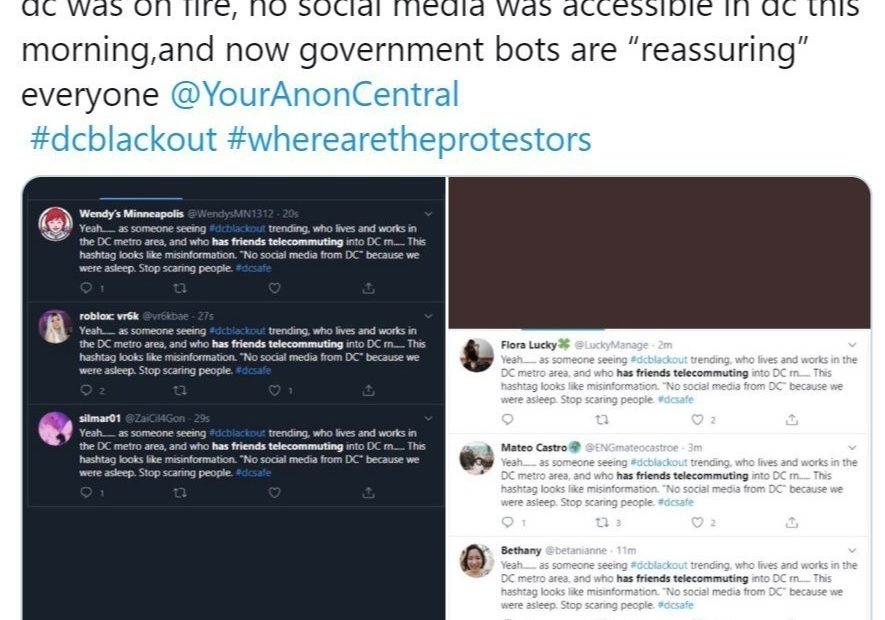 ‘None Of This Is True’: Protests Become Fertile Ground for Online Disinformation

The image would shock just about anyone: a fire so large that it seems to stretch halfway up the 550-foot-tall Washington Monument, and burning so bright that it dramatically illuminated the landmark. 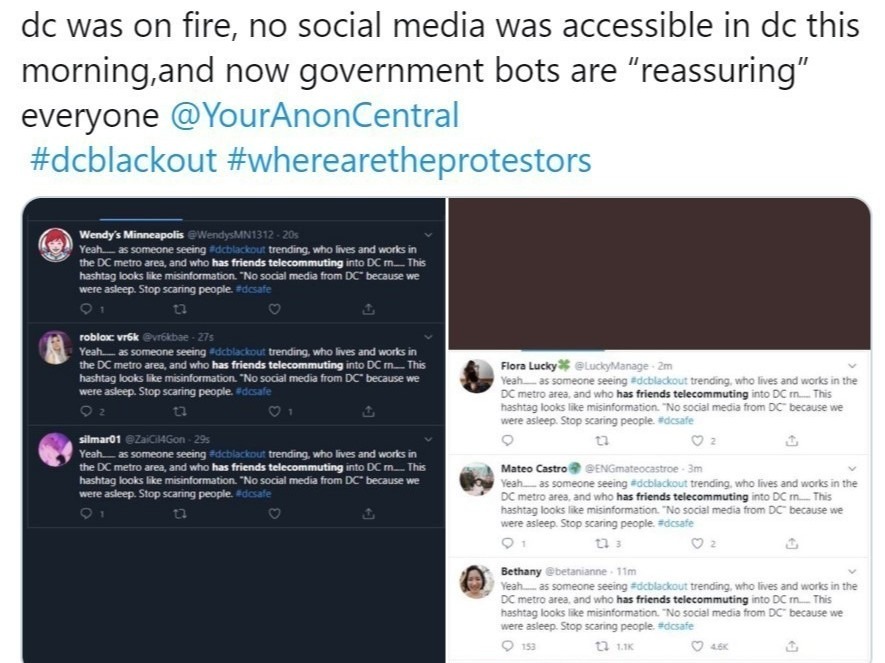 A fake story began circulating online before it was disputed by journalists as well as a number of bots. Experts say the campaign may have been intended to make people question whether anything they see online is true. CREDIT: Twitter screenshot

The image was a screenshot from the fictional TV show Designated Survivor. But coming on the third day of raucous protests around the White House against police violence — which did include some fires that were intentionally set — it could have seemed like it was real.

The image quickly went viral on Twitter, not unlike a number of other rumors that spread during moments of uncertainty and chaos over the weekend and that showed how the intense polarization of the moment is fertile ground for online disinformation campaigns.

Some protesters accused a CNN reporter of being a Washington, D.C., police officer in disguise, forcing the network to clarify he was one of its journalists on the ground.

And there were claims spread under the #dcblackout hashtag that cellphones and other communication devices were blocked as part of a strategy to allow violent police reprisals to go unreported. That, too, was not true.

“Some of my videos and pics being posted by accounts saying they were last before a “#dcblackout” where streams and cells shut down. I didn’t experience anything like that and — though I didn’t try streaming — had no issue with phone as I tweeted and worked until 2:30 am at least,” Yahoo! reporter Hunter Walker tweeted Monday morning.

“Stop retweeting #dcblackout,” CBS reporter Christina Ruffini added. “None of this is true. Eventually, even TV crews need to sleep, but ours and many others were out late into the night. Their phones worked. Live signal was strong. Many of these tweets are the same wording. Don’t fall for whatever is happening here.”

Experts said the #dcblackout hashtag seemed to be the work of a well-funded and organized Internet campaign, and a successful one at that.

Many of the accounts promoting the #dcblackout claims had few followers, indicating they could have been created for the purpose of spreading disinformation, said Alex Engler, a scholar at the Brookings Institution who has followed the use of social media and technology to spread propaganda.

“A lot of these accounts are pretty suspicious, especially the ones disseminating them at night. But there are very real people now promoting this. By 9 a.m. the fact that the origin of the story seems to be manufactured would already be obscured to you,” Engler said.

“Even if a huge percentage of those real people are using that hashtag to say, ‘Hey, this isn’t real’ — it doesn’t matter,” Linvill said. Even if only 20% of people posting about it believe it, “20% of a million is still 200,000 people.”

In an email to NPR, a Twitter spokesperson said it is “investigating the hashtag #dcblackout” and that it has suspended hundreds of “spammy” accounts that tweeted it out.

The #dcblackout campaign also showed a level of digital sophistication that didn’t become clear until 12 hours after the original lie began spreading.

While reputable sources had debunked the claims by Monday morning, the online manipulation wasn’t finished. A coordinated network of hacked accounts then began tweeting about how the hashtag was faked and that people don’t need to panic.

“As someone seeing #dcblackout trending, who lives and works in the DC metro area, and who has friends telecommuting into DC rn….. this hashtag looks like misinformation,” began hundreds of tweets posted by different accounts. 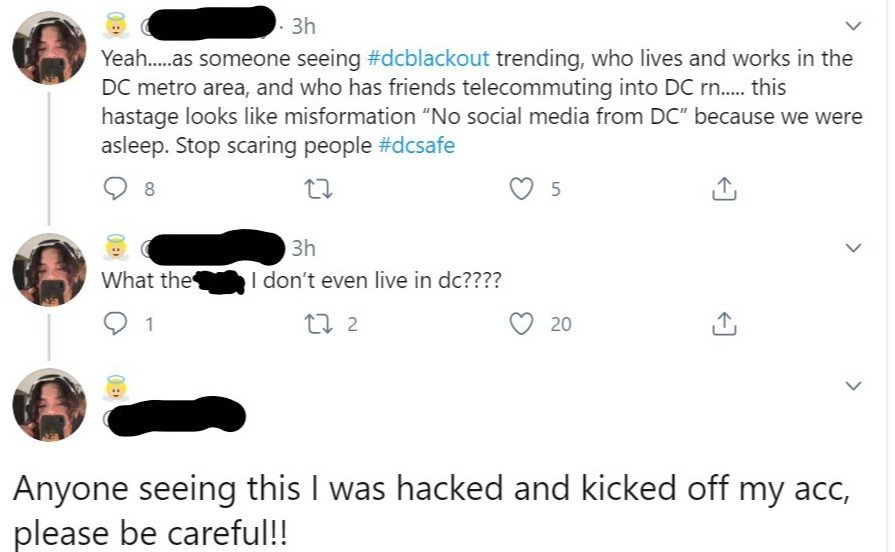 A Twitter user posts about being hacked after posting a message related to the #dcblackout disinformation campaign. CREDIT: NPR screenshot

By having so-called bot accounts push back against the original storyline, Linvill said some users may have ended up more likely to believe it because it could seem like a staged debunking.

“They’re creating this double negative,” he said. “And causing everyone to question their own reality.”

He hesitated to attribute the campaign to a specific actor but called the strategy of pushing multiple competing narratives “a classic Russian move.”

Both Linvill and Engler said they expect to see more operations similar to this one as the protests continue, the presidential election draws nearer, and people use social media more than ever before as a result of the coronavirus pandemic.

“This is an enormous moment in American politics. It has the entire country’s attention. When there have been moments like this, especially when fraught with divisions, we’ve routinely seen foreign parties exacerbate those differences of opinions and drive distrust and chaos,” Engler said.