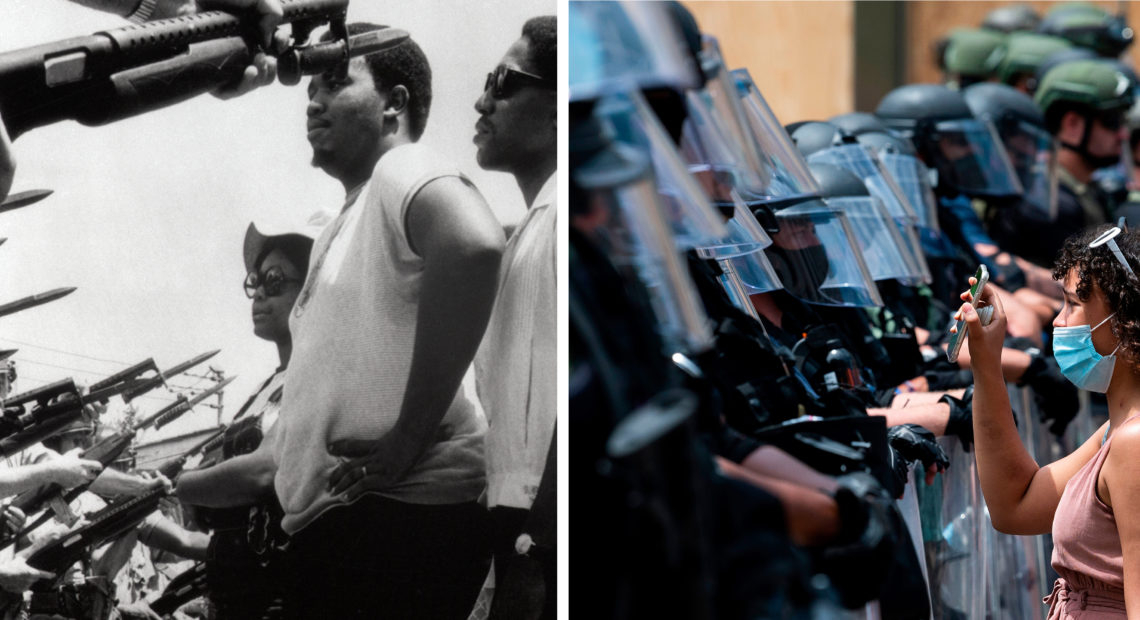 As the protests over the police killing of George Floyd in Minneapolis began to mount over the past several days, my inbox and Facebook page began to fill with observations from my contemporaries. Many of them said variations of the same thing:

LEFT: Leaders of a march of about 255 people stare at police officers who stopped the group from marching on city hall in Pritchard, Ala, on June 12, 1968. RIGHT: A protester shows a picture of George Floyd from her phone to a wall of security guards near the White House on June 3, 2020, in Washington, DC. CREDIT: Bettman / Jim Watson/Getty

By that they meant the chaos, the feeling that society was on the edge of something important, but that we were going to have to go through some stuff before we got there. Martin Luther King, Jr. had been assassinated in April and barely two months later, Robert Kennedy suffered the same fate while in Los Angeles after winning the California presidential primary. The national political conventions that year saw street protests that look pretty familiar now. Especially at the Democratic convention, where police and protesters slugged it out in the streets. (Then, as now, the police were outnumbered, but they made up for that by being armed with batons, tear gas and, of course, guns.)

The miracle of modern television brought the convention carnage right into our living rooms. I saw CBS reporter Dan Rather get punched by convention security on-camera, as Walter Cronkite sputtered in disbelief.

Republican candidate Richard Nixon would take advantage of the upheaval to insist that his would be a law and order presidency. You want to protest in the streets? he asked (in so many words). Then you should be prepared to be physically disciplined and arrested. His Law and Order platform was an attractive message to many (mostly white) Americans, who elected him. Nixon, to me, felt like the authoritarian head of house who didn’t want his wife to wear pants, didn’t want his kids to talk back and expected dinner on the table — or at least a pre-prandial drink ready — when he walked through the door in the evening.

The kids didn’t listen, though. They were fed up with the Vietnam war, a years-long conflict that had become a meat grinder for poor kids and gave winking exemptions to rich and middle-class college students — including ones who would go on to lead the nation. They were outraged, too, that law and order was visited upon certain citizens, while other, paler ones got protected and served. So the disobedient youngsters stayed in the streets.

My own high school, in New Haven, CT, exploded in a race riot that became national news, and made us part of a Ford Foundation study on urban high schools in crisis.

Basically, 1968 felt like one long riot. I’d never seen anything like it — but I was only a high school junior. I didn’t have a lot to compare it to.

It was a year unlike any most of the adults in my life had seen, either — and they’d been through a Depression, two wars (WWII and Korea) and Senator Joseph McCarthy’s Red Scare.

Having lived through 1968, watching as the mostly peaceful protests during the day gave way to violent fury at night, the current protest-riot cycle seemed familiar enough at first glance. Cops in riot gear, flaming storefronts, a confetti of broken glass on the sidewalks? Been there, done that.

But there are some critical differences this time around. Videos from cell phones — something most of us hadn’t even dreamed of in 1968; we were still dropping dimes into phones in booths! — document abuse of power. Those images zip around the world in seconds. And because these videos exist, it becomes much harder for the official version of clashes like the ones we saw over the weekend to become the only version. Now we have a virtual Rashomon of views to ponder: Whose truth? Which truth?

And in 1968, the American economy was still humming along. Most people had jobs, and some landmark civil rights legislation had been passed only a few years earlier. There was income inequality, but not on the staggering level we’re experiencing now. This time, thanks to COVID-19 and the economic collapse that has followed, a whole lot of people aren’t working. Many are sick, or have been sick, or expect to get sick. The U.S. has passed the sad milestone of more than 100,000 dead from the coronavirus.

And disproportionate numbers of black people have been stricken by the disease. The community’s mordant motto might be: “If the police don’t get you in these streets, that ‘rona might. Be safe y’all!”

If only we could obey. But it’s not that simple.

The fact that black people are coming out knowing the risk indicates how critical these protests are. (It will be weeks before we even know how big a risk folks were taking — how much they might suffer for having given up their isolation.)

Government is different this time around, too. In 1968 we had a president, Lyndon Johnson, whose competence wasn’t widely questioned, and a cabinet that seemed intent on making American society great. (This is not to say everyone approved of LBJ’s policies. Conservatives hated his Great Society initiatives; liberals hated his insistence on remaining in Vietnam. But few thought he lacked the intelligence to run the country.)

Today we have what’s more broadly thought of as a kakistocracy, where opportunists preside over the American decline while protecting their personal fortunes.

There was plenty of racial tension in 1968, but it was often couched in language more civil than the language we routinely hear from the current Commander-in-Chief. LBJ infamously used the N-word in private conversation — but he signed laws that enfranchised black Americans. Call us whatever, but let us vote. Now, we have a president who dismisses entire swaths of the African continent and the Caribbean as “shithole countries,” and wonders why we’d ever spend money on improving them. He wants his immigrants to come from Norway or France. He has done his best to dismantle the laws and protections that have made black Americans equal under law.

And the police this time around? They’ve gone from being police to being paramilitary machines, thanks to an infusion of money from the Department of Homeland Security. Instead of rolling around in cruisers, many ride in armored SUVs. The old department-issue handguns and shotguns have been augmented with assault rifles, flash-bang grenades, rubber bullets and pepper balls. Not your grandfather’s riot gear. And according to a 2018 study, these things are employed with far more frequency in black and brown neighborhoods.

In 1968, in Connecticut where I grew up, and dozens of other states, the neighborhoods that went up in flames were largely black and often working class or poor. Watts. Harlem. DC’s 14th Street corridor. Chicago’s South Side. Tony neighborhoods were spared, even as pundits wondered, aloud and on the Op Ed pages, “Why would they burn down their own neighborhoods? That doesn’t make any sense!”

Indeed, this time around the program was changed up. The hoods remain intact, for the most part, but areas in a lot of cities that had never contemplated hood conditions have suddenly found themselves under siege. “Folks are looting in Santa Monica,” writer Lawrence Ross posted on Facebook. “Just amazed and fascinated at the strategic Gen Z-ness of this looting. It’s like they asked themselves, “Why ARE we looting and burning our own neighborhoods? Let’s go somewhere in YOUR hood. Thanks for the suggestion!” (It should be noted here that while much of the media has been intently focused on the looting that occurred in many cities, the majority of protesters were peaceful non-looters.)

And while the White House is ringed outside with National Guard protectors as inside the president tweet-rages, there is change, and maybe hope, lurking somewhere nearby. The officer who killed George Floyd has been arrested and charged with second-degree murder. The officers that watched and did not intervene have been charged with aiding and abetting him. Police departments around the nation have expressed their revulsion that Floyd’s death occurred at all — in stark contrast to reactions that have come after other, similar tragedies.

So if we look back at 1968, maybe there is a glimmer for now — a bright spot that doesn’t come from a burning building. From that one chaotic year, a new class of American leaders emerged: people like John Lewis, who was forged in the heat of the civil rights movement, and who would go on to forcefully advocate for civil rights as a member of Congress. John Kerry, who unlike many of his privileged peers, served in a war he would later declare unjust, and spent a lifetime in public service representing U.S. service men and women, working through diplomacy to avoid conflict when possible. Jesse Jackson, whose insistence that America remember equal justice had not been realized for all, and whose presidential candidacy mobilized millions of new voters. Hillary Rodham Clinton, whose advocacy for poor children at the state and federal levels made children’s welfare more visible, and whose presidential candidacy may have inspired a new generation of girls to lead.

1968 was the catalyst for those things to happen. And perhaps that will happen again this time, after the ashes have cooled: new people with new visions who will step into the current leadership void.