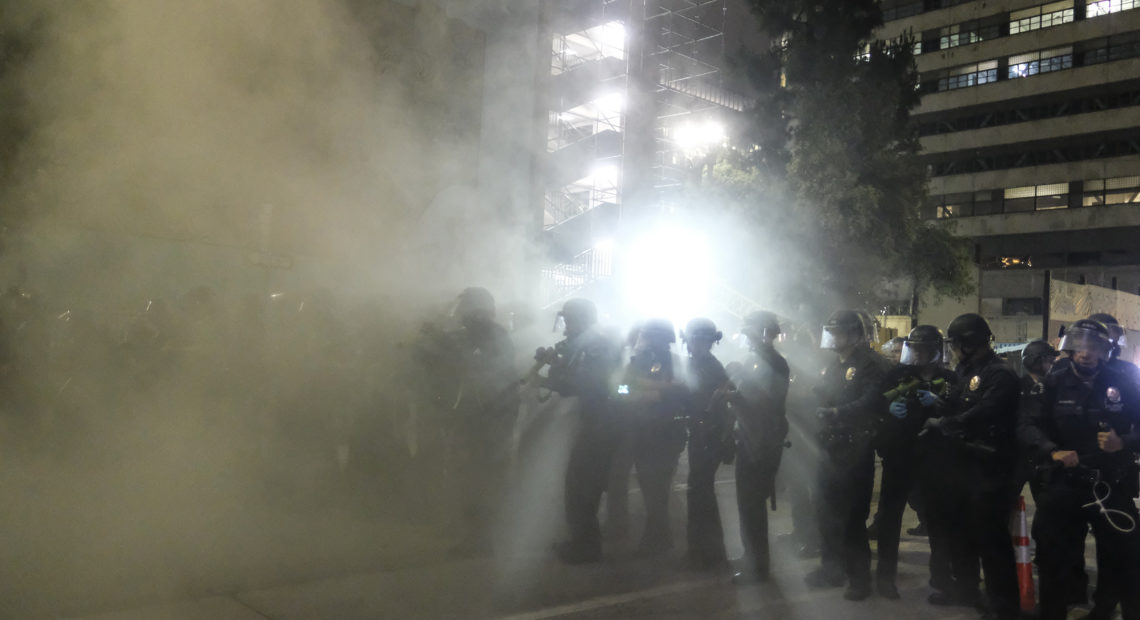 BY WILL STONE & CARRIE FEIBEL

Nationwide protests against police brutality and systemic racism have brought tens of thousands of Americans into tense and sometimes violent encounters with law enforcement. Many police departments are using crowd-control tactics like barriers, curfews and surveillance and riot-control weapons such as tear gas, rubber bullets and flash bangs.

Concern about the excessive use of these weapons has been growing in recent days: On Friday, the mayor of Seattle announced a 30-day ban on the use of tear gas. There are calls for other cities to do the same. In Minneapolis, where George Floyd died last week after a police officer pressed a knee into his neck, the police department agreed to ban the use of chokeholds. 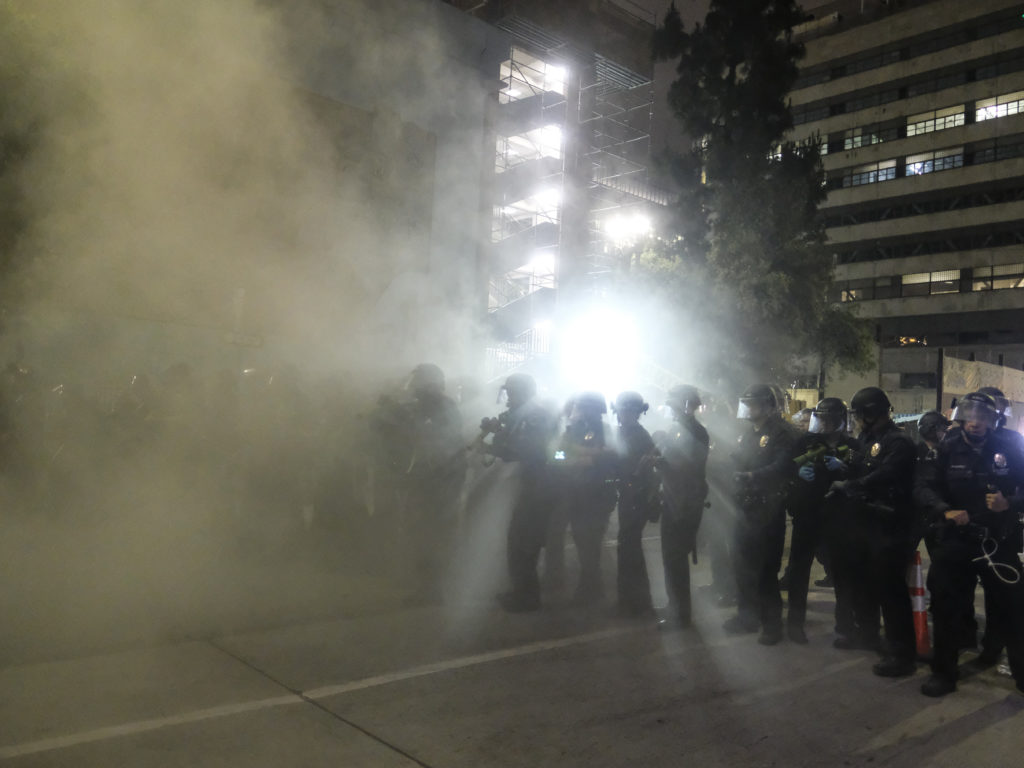 Police departments use a variety of strategies and weapons against crowds. Often dubbed “less than lethal” weapons, they can still cause serious injuries, and the occasional death, especially when used at close range.

Tear gas is an umbrella term for a variety of aerosolized chemical irritants used by police and military to incapacitate and disperse crowds. CS gas and pepper spray are the most common. Although chemically different, they both target pain-sensing nerves and cause similar symptoms. The active ingredient in pepper spray is oleoresin capsicum, which is derived from chiles. In contrast, CS gas (o‐chlorobenzylidene malononitrile) is a chlorinated, organic chemical. (An alternative to CS gas is CN (chloroacetophenone), still used in Mace, but it’s not widely used for crowd control anymore because it is more toxic than CS gas.)

The “tear gas” chemicals now seen drifting over crowds in the recent protests are banned in warfare. But the Chemical Weapons Convention does not bar their use against civilians as “riot control agents,” or RCAs.

How do police use these chemicals?

In law enforcement, they are called “riot control agents.” Police spray them as a liquid from a pressurized dispenser, lob them into crowds as grenades or fire off canisters that contain a powdered blend, which then disperses as smoke or fog. It can be difficult to determine what exact chemicals are being used, though, says Charles Mesloh, a professor of criminal justice at Northern Michigan University. “There’s no regulation on chemical agents, so you can put anything in that you want,” he says.

Mesloh has analyzed numerous brands and found in them chemicals such as dry-cleaning solvent. Mesloh says sometimes you can get hints of what is being used from the color of the smoke. He warns that one should be extra wary when the smoke has a rainbow-like appearance — something he observed during the 2014 Ferguson protests. An unusual blend of colors can indicate different brands and chemicals are mixing together, which could be hazardous, Mesloh says.

What do they do to your body?

CS gas can also provoke severe inflammation and cause chemical injury to the lining of the airways and the lungs, according to Duke University professor Sven Eric Jordt, who studies the physiological effects of tear gas. Some people also experience severe respiratory symptoms such as pulmonary edema, reactive airways dysfunction and respiratory arrest, vomiting and allergic reactions from these chemical agents. Other possible health effects include permanent damage to the tissues of the eye, persistent symptoms of asthma and traumatic brain injury from the projectiles used to deploy the chemicals.

How likely am I to be seriously hurt from tear gas?

The use of tear gas and other chemical irritants has been increasing, both in the U.S. and globally. Jordt and other experts say there needs to be more research on their risks, especially when used against civilians who may have underlying health conditions. A 2017 review of the evidence found the majority of exposed people recover after being exposed to tear gas and pepper spray. The chemical irritants are rarely lethal, but the authors concluded that they “can cause significant injuries as well as permanent disabilities,” particularly if there is prolonged exposure. Your overall vulnerability hinges on several factors: how close you are, how much is used and whether the exposure happens outdoors (safer) versus indoors (less safe).

“We now have more evidence that tear gas is much more toxic than it was previously thought,” says Jordt.

A 2014 study showed that tear gas makes people more susceptible to developing respiratory illness. This finding led the U.S. military to significantly reduce the amount of CS gas its recruits were exposed to during training exercises.

Experts have told NPR that using these chemical agents during the coronavirus pandemic is especially problematic because they cause people to cough and spread infectious droplets, and set back the body’s antiviral defenses, making it more likely for someone to develop symptomatic or severe COVID-19.

What should I do if I’m exposed to tear gas or pepper spray?

The best thing you can do is get away from the chemicals. Then apply “copious amounts of water on your skin,” using soap if possible, says Dr. Ruddy Rose, director of the Virginia Poison Center at Virginia Commonwealth University Medical Center. For your eyes, Rose advises continuously irrigating them for 10 to 15 minutes with saline solution, if possible. Although milk can help relieve the burning sensation of spicy food, and can have soothing effects on the skin, Rose says it is not necessarily helpful for dealing with the pain of tear gas or pepper spray. You should definitely not flush your eyes with milk, Rose says. Thoroughly wash any clothing that came into contact with tear gas.

“Flash bangs”: How dangerous are they?

Flash bangs are explosives that are intended to stun and disorient people. “All you are trying to do is make a loud noise and a bright light,” says Mesloh, who compares the explosion to that of an M-80 firecracker. Flash bangs are designed to temporarily blind or deafen people. But in rare circumstances, they can cause serious injuries (like blowing off fingers or hands) or even death. That may happen when the police officers make an error throwing the devices, and injure themselves. You are also at risk if a flash-grenade explodes near glass or gravel, creating a dangerous spray of tiny sharp fragments. Also, flash bangs can start fires.

“Rubber bullets”: What are they?

Protest coverage has described police officers shooting “rubber bullets,” but that term can be misleading, says Brian Higgins at John Jay College of Criminal Justice. Police use a wide variety of “less than lethal” projectiles made of plastic, rubber, dense foam or a sponge-like material with a rubber coating. Others have metal cores. Police also shoot special bean bags that fit into shotgun casings. “Pepper balls” are filled with pepper spray, but are sometimes mistaken for rubber bullets when they don’t explode on impact. Another form of projectile are baton rounds made of plastic, wood or rubber that are intended to be shot toward the ground and skip, before making contact with someone.

How dangerous are “less than lethal” projectiles?

There are now numerous examples from recent days of protesters and journalists being seriously injured and permanently blinded by these projectiles. Higgins says “these rounds are not supposed to be fired indiscriminately into a crowd.” He says police should be trained to shoot them at the lower body — never above the shoulders — and not at close contact. As Kaiser Health News reports, they can break bones, fracture skulls, explode eyeballs, cause traumatic brain injury and damage internal organs. A 2017 study found that among people injured by “less than lethal” projectiles, more than 70% had severe injuries, 15% were permanently injured and less than 3% percent died. The study’s authors concluded that these projectiles “do not appear to be an appropriate means of force in crowd-control settings.” Research shows that using these weapons does not deescalate tensions during protests, but can actually lead to more violence.