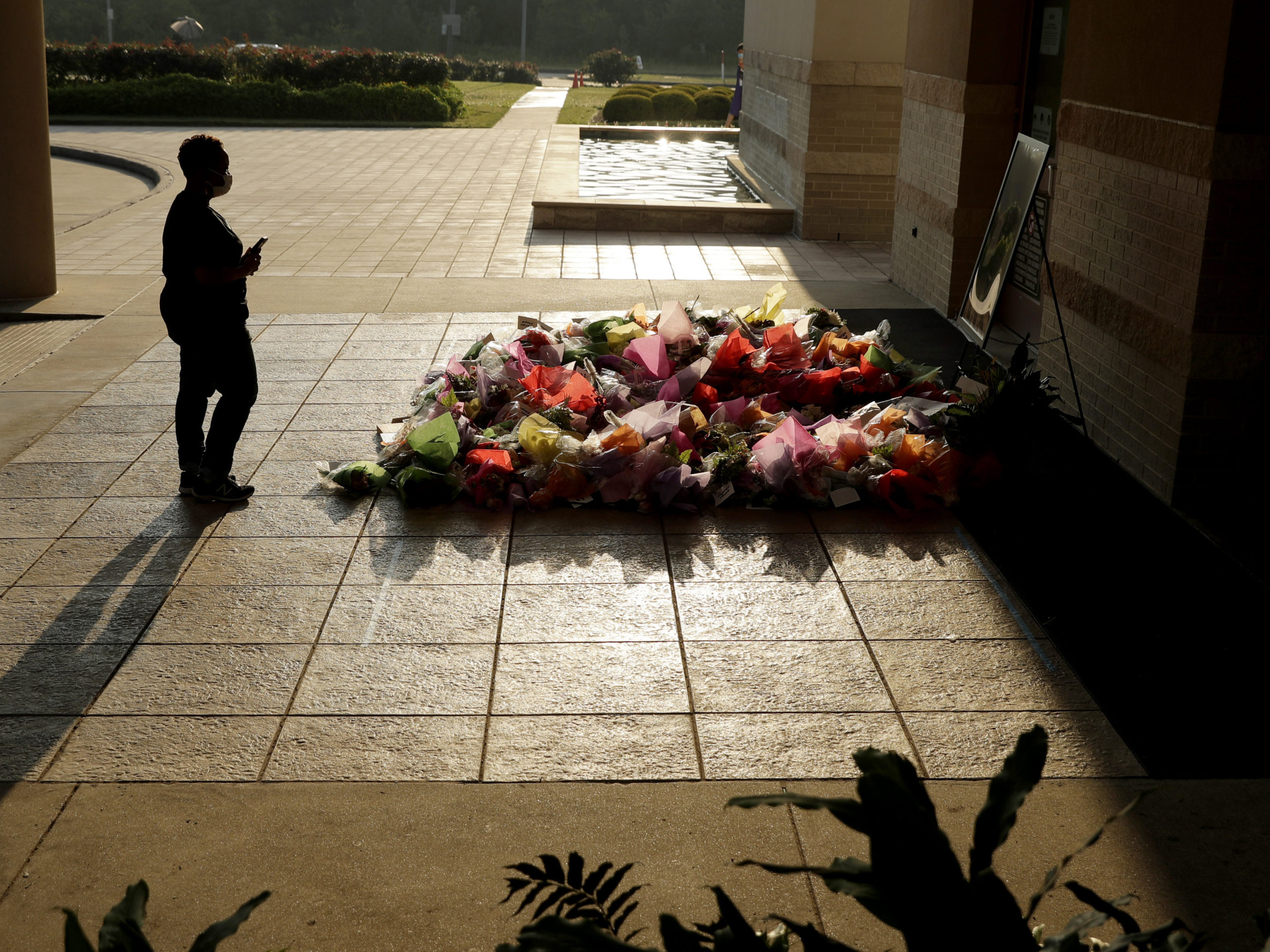 George Floyd, whose killing by police inspired worldwide protests calling for an end to systemic racism and police brutality, was taken to a cemetery for burial Tuesday in his hometown of Houston.

The black man died May 25 after a white Minneapolis police officer knelt on his neck for nearly 9 minutes. A video captured by a bystander showed Floyd pleading for air and calling out for his mother.

Floyd, 46, was to be buried next to his mother. 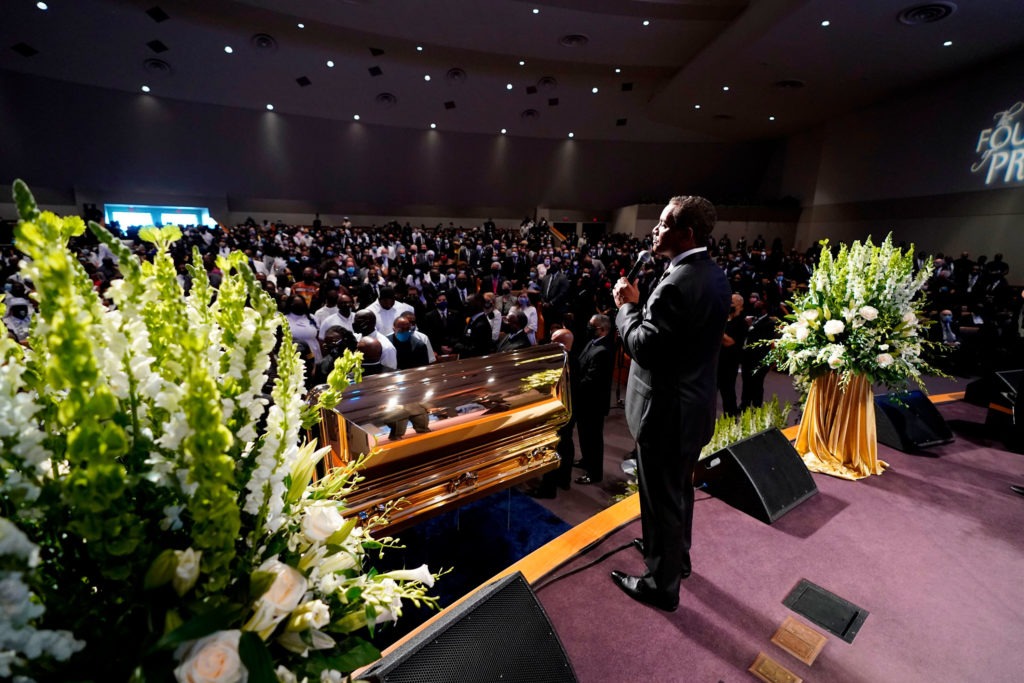 Tuesday’s funeral service got underway at The Fountain of Praise church about 45 minutes after its scheduled start time in part because so many were in attendance.

“So much for social distancing today,” the Rev. Remus Wright, the church’s senior pastor, said to the crowd. “Obviously it’s a lot more people than we thought.”

Mia Wright, the co-pastor, said, “This is a moment by which God has gathered people all around the world to connect us around the life of the brother George Perry Floyd.”

They both promised a “homegoing” ceremony that would be a “foot-stomping, toe-tapping, shouting, hallelujah, praising God” event.

Thunderous renditions of “His Eye Is On The Sparrow” and “The Blood Will Never Lose Its Power” rang through the sanctuary.

The majority of people had facial masks on to help prevent the spread of the coronavirus. The pastor said those without masks were encouraged to get one or run the risk of not being allowed to stay for the service.

“When has America ever been great?”

Through tears, Brooke Williams delivered an emotional tribute to her uncle.

She described her uncle as a spiritually grounded activist who could move others with his words. She railed against a corrupt criminal justice system, and seemed to speak directly to the officer who pressed his knee on Floyd’s neck for 8 minutes and 46 seconds. 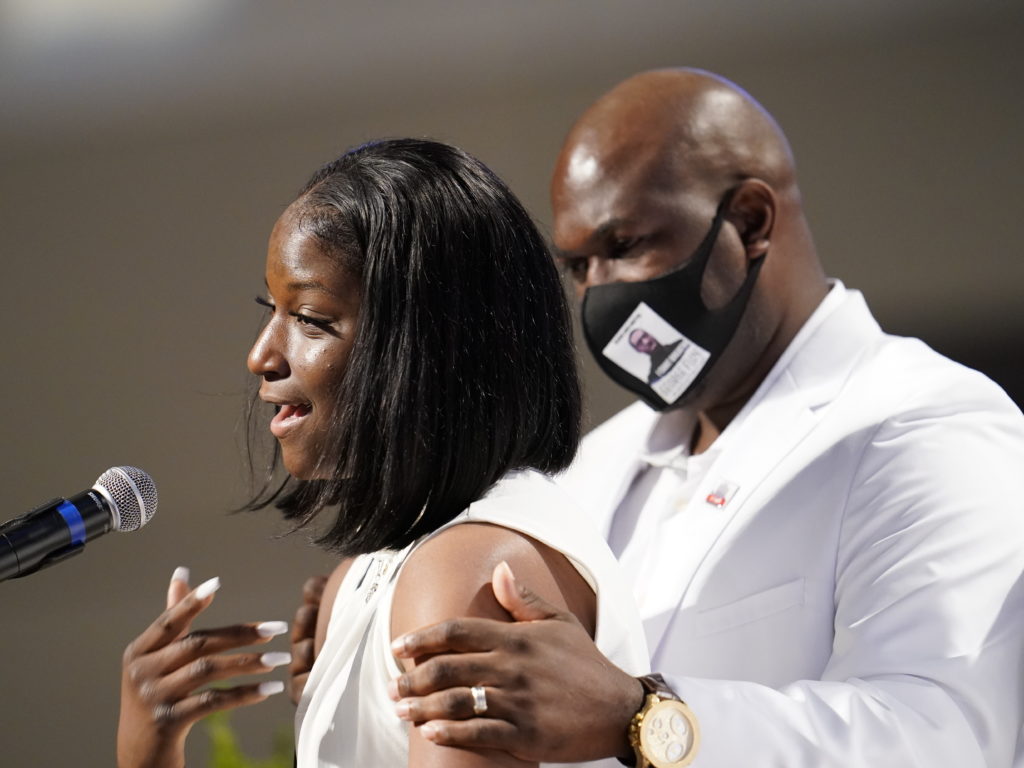 “He begged and pleaded, many times, just for you to get up,” Williams said. “But you just pushed harder.”

“Someone said, ‘Make America Great Again,’ but when has America ever been great?” she asked.

Williams said it is time for change in the country, even if it means more protests.

In delivering Floyd’s eulogy, civil rights activist the Rev. Al Sharpton said there is an “intentional neglect” in the U.S. toward punishing people who kill black Americans.

“If four black cops had done to one white what was done to George,” Sharpton suggested, they would be sent to jail without hesitation.

“Until we know the price for black life is the same as the price for white life, we’re going to keep coming back to these situations over and over again,” Sharpton said.

He also honored families attending the funeral service who had relatives killed during interactions with police. These included families of Eric Garner, who was choked to death in New York in 2014; Michael Brown, shot dead in Ferguson, Mo., also in 2014; Botham Jean, who was shot dead in his apartment by an off-duty officer in Dallas in 2018; and Pamela Turner, who was killed outside her apartment by a Baytown, Texas, police officer in 2019.

Sharpton also recognized Trayvon Martin’s mother, whose son was shot and killed in 2012 by neighborhood watch coordinator George Zimmerman in Sanford, Fla., and Ahmaud Arbery’s father, whose son was killed in Glynn County, Ga., in February. One of the three white men accused in Arbery’s killing is a retired law enforcement officer.

“All of these families came to stand with this family, because they know better than anyone else the pain they will suffer from the loss that they have gone through,” Sharpton said.

The funeral followed days of public memorials that drew thousands of mourners, including one on Monday in Houston, one over the weekend near his birthplace in North Carolina and one last week in Minneapolis. 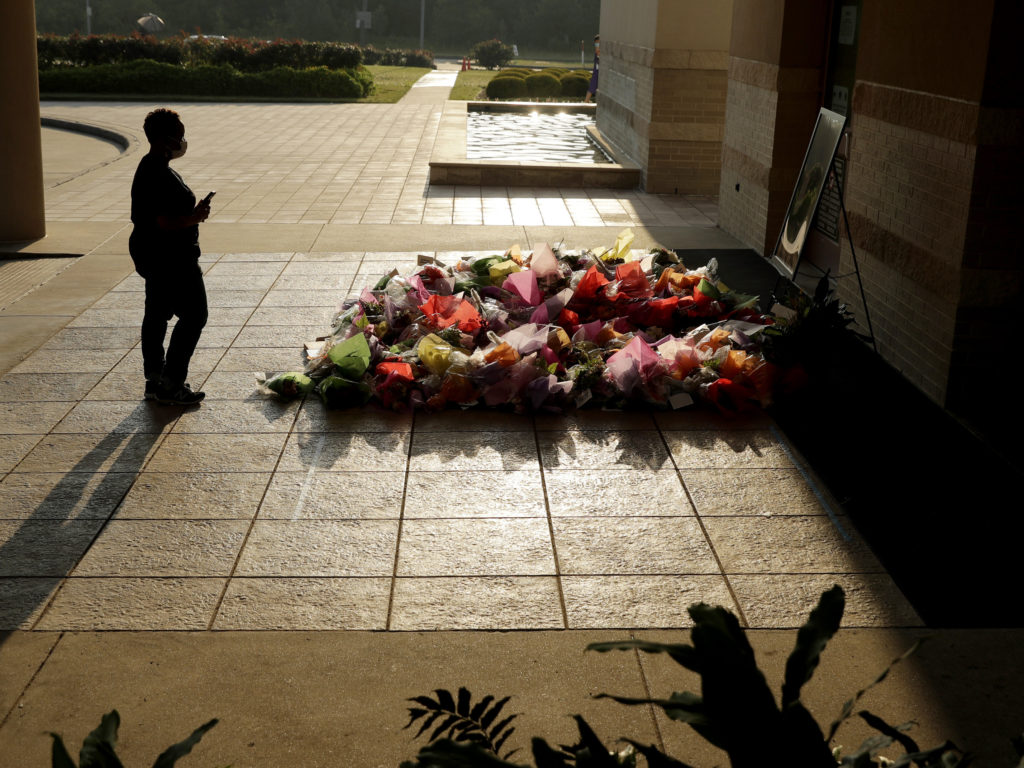 A woman stops to photograph a memorial Tuesday for Floyd at The Fountain of Praise church in Houston. CREDIT: Eric Gay/AP

On Monday, hundreds of mourners braved sweltering temperatures in Houston to pay their respects to Floyd, who lay in an open gold-colored casket. Many wore T-shirts that said “Black Lives Matter” and “I can’t breathe.”

Following Monday’s public memorial, Sharpton vowed a continuation of marches that have been held across the United States and around the world, including Germany and England.

Joe Biden, the former U.S. vice president and presumptive 2020 Democratic presidential nominee, said in a pre-taped message played during the service that Floyd’s death is a reminder of the country’s “racism that stings at our very soul.”

“Now is the time for racial justice,” Biden said. “That’s the answer we must give to our children when they ask ‘why?’ Because when there is justice for George Floyd we will truly be on our way to racial justice in America.”

As Houston Public Media reported Monday, Biden did not attend the funeral “out of concern his Secret Service detail would create a disruption.” He met with the Floyd family privately Monday.

Steve Wells, pastor of Houston’s South Main Baptist Church, also spoke at the funeral. Wells, who is white, said that “it is easy to not talk about racism” at his church, but he said failing to act to change that is “a path to destruction.”

During a striking moment before a largely black audience, Wells said white churches “are not as good as we ought to be” on matters of racial inequality “and that is not good enough.”

Derek Chauvin, the former Minneapolis police officer seen in the video with his knee on Floyd’s neck, appeared Monday via video link in Hennepin County District Court in Minneapolis.

As NPR reported, a judge set his bail at $1 million with conditions. That means he is eligible for supervised released. He could also be released without conditions at a higher bail amount of $1.25 million.

Chauvin is charged with second-degree murder in Floyd’s death.

Like Chauvin, three other Minneapolis police officers were terminated and arrested in Floyd’s death. They are facing charges of aiding and abetting murder.

Also on Monday, House Democrats unveiled new legislation that, if passed, would bring widespread reforms to policing in the United States.

The Justice in Policing Act of 2020 has more than 200 sponsors. Among the measures the bill calls for include prohibiting the use of chokeholds, banning no-knock warrants in narcotics-related cases and establishing a national registry to track misconduct by law enforcement.