Around the world leaders see opportunity in the global pandemic to address the other big problem humanity faces: climate change.

The United Nations and International Energy Agency suggest all nations consider climate when drafting stimulus plans. The European Union is developing a plan that does that.

But here in the United States, climate change and reducing greenhouse gas emissions have not been a part of the $3 trillion in relief packages passed so far. That’s despite the country’s history of passing big energy programs to boost the economy.

Consider President Franklin Roosevelt’s New Deal a century ago and electricity may not come to mind. But a big element was building massive hydro-electric dams on the Columbia River in the Pacific Northwest. Then the government paid Woody Guthrie to write songs about them.

When the Grand Coulee Dam was built between 1933 and 1941, it effectively blocked salmon from traveling to the upper reaches of the Columbia River. CREDIT: U.S. Bureau of Reclamation

The legacy of those dams is mixed. They forever changed the environment but they also brought electricity to rural America.

“During the 1920s and 1930s about 90% of the U.S. farms had no electricity,” says Ted Case, executive director Oregon Rural Electric Cooperative Association. He’s also written about a New Deal agency called the Rural Electrification Administration that installed utility poles and power lines down many miles of dusty roads and connected homes to the grid.

“That day was the most incredible day for a lot of families — when they finally got to throw that kerosene lantern out the window, which many people did,” says Case.

“It’s an investment that will double the amount of renewable energy produced over the next three years,” Obama told a crowd as he signed the American Recovery and Reinvestment Act.

Solar and wind grew quickly and are now the cheapest source of electricity in some places. But in the wake of the pandemic, hundreds of thousands of renewable energy jobs have been lost.

With about $3 trillion in relief packages already passed, energy and climate change have received almost no attention.

That as scientists says carbon emissions must be reduced dramatically to avoid the worst effects of climate change. Accomplishing that would require huge investments and since the government already is spending a lot of money it seems a natural fit to many in Washington.

“It is irresponsible from a very basic good government perspective to not have any of that money go to clean energy and fighting climate change,” says Julian Brave NoiseCat, Vice President of Policy and Strategy at Data for Progress.

NoiseCat co-authored a Green Stimulus proposal similar to the Green New Deal. It calls for spending at least $2 trillion to create jobs for such things as building and retrofitting houses, installing rooftop solar panels and deploying electric buses. The plan ambitiously aims for 100 percent carbon-emission-free energy within a decade.

Heather Reams also is concerned about climate change but her politics are more conservative and market-focused. She heads the group Citizens for Responsible Energy Solutions.

“If you’re going to put taxpayer money some place, put it where you’re going to get a good return and that is in clean energy,” says Reams. She says there are bills in Congress that could become stimulus programs, even with an administration that shows little interest in climate change. 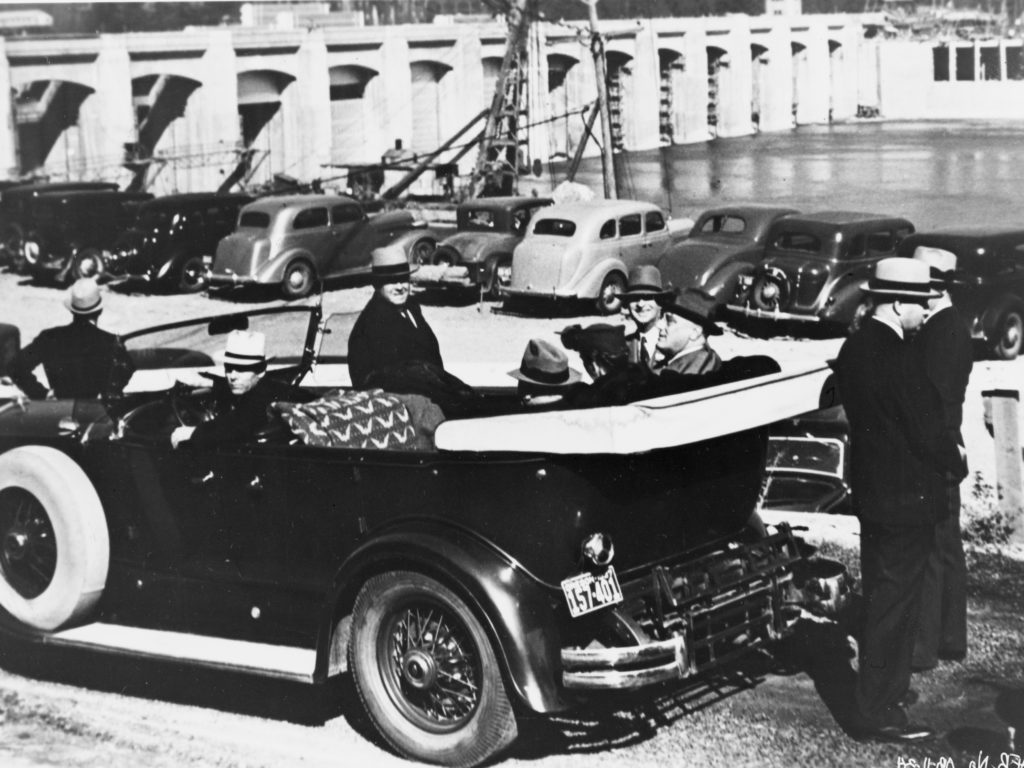 President Franklin Roosevelt at the dedication of the spillway at Bonneville Dam on the Columbia River in 1937. CREDIT: Library of Congress

“They do recognize the economic value that clean energy brings, the jobs it brings, particularly to a lot of red states. So, I think the business certainty ‘trumps’, if you will, any kind of political challenges,” says Reams.

Another idea has the support of some conservatives and big oil companies: taxing carbon dioxide emissions.

“I think it’s fair to say that carbon taxes are economists’ favorite way of addressing climate change,” says Ioana Marinescu, who is an economics professor at University of Pennsylvania.

Carbon taxes work like sin taxes. Governments tax the thing they want to reduce. Most proposals, including one from the Climate Leadership Council, then redistribute the proceeds back to taxpayers.

But Marinescu says this would be a bad time to levy new taxes — in the middle of an economic downturn. In a recent podcast, she suggested the government invest lots of money in clean energy up front and then levy a carbon tax to pay for it when the economy recovers.

It’s one more idea among many. The point is that climate change arguably is the biggest problem humans face now and fixing it requires sweeping solutions at a time the U.S. is spending lots of money.

“It’s a sad time but also an opportunity to do some investments that perhaps we didn’t have the mojo to get our act together and do before. Sometimes it takes a good crisis to finally move in a whole new direction just like the New Deal,” Marinescu says.

Here’s what’s different though. After the Great Depression and the 2008 recession the country had presidents who believed in fixing the big energy problems of their day. President Trump has doubts about climate change and shown no sign it’s a challenge he wants to take on.