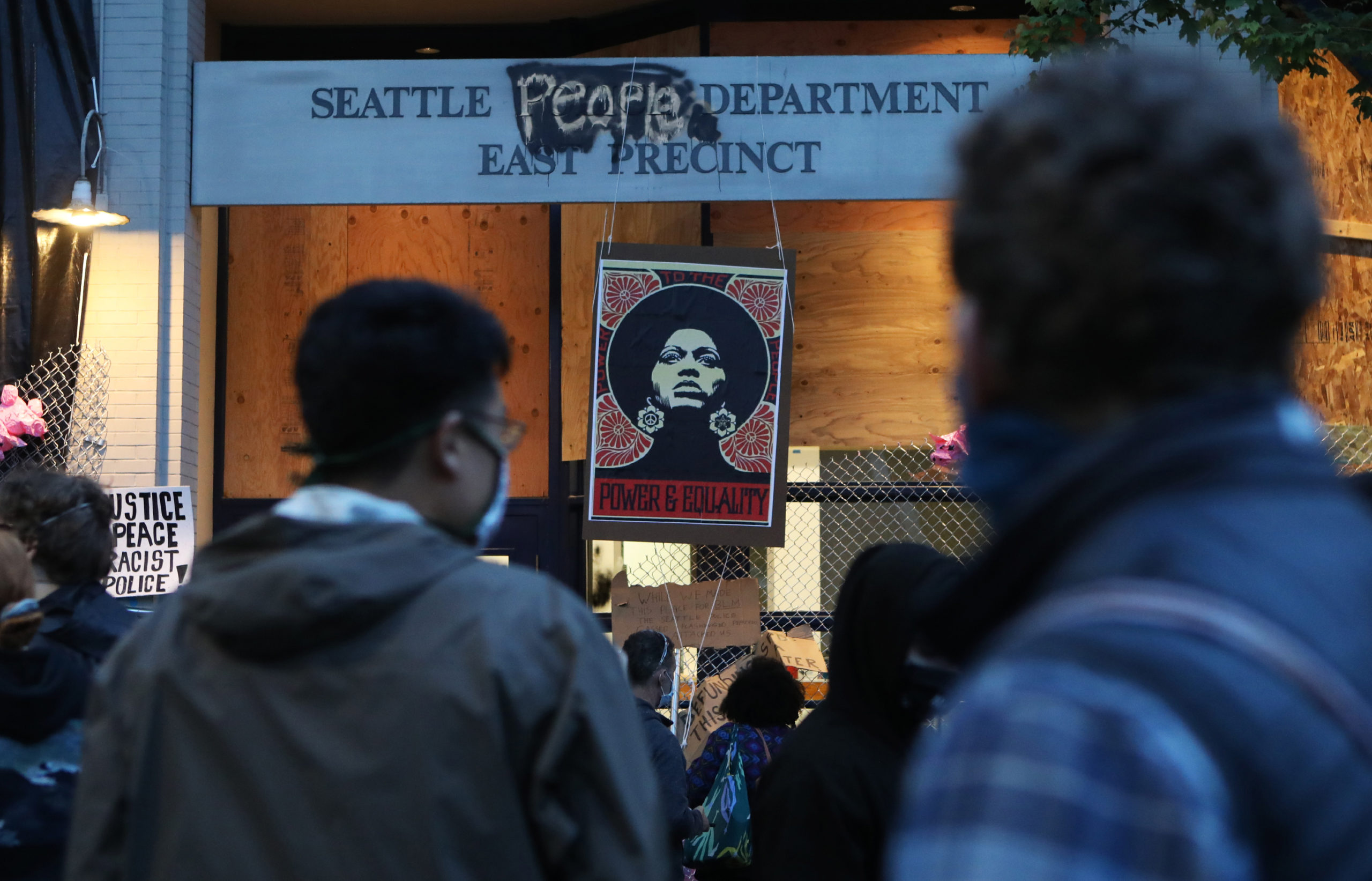 ‘Remember Who We’re Fighting For’: Balancing The Message And People Of Seattle’s CHOP Zone

The fiery scenes of just over a week ago seem like another lifetime in the sprawling protest camp built around the Seattle Police Department’s vacated station in the Capitol Hill neighborhood.

Tear gas has given way to the smoke from a hot dog stand. Makeshift clinics now stand on the streets where young protesters were injured by flash-bang grenades. Music — calypso on one corner, Public Enemy on another — mingles with the sound of speeches about defunding the police. Selfies are snapped in front of signs welcoming visitors to “Free Capitol Hill.”

Lest the message get lost in the new street-fair vibe, there’s also a candlelit memorial for George Floyd and other Black people killed by police. “Remember Who We’re Fighting For” reads a large poster. The reminder speaks to the unease that many Black protesters express about the protest zone and its use of Black Lives Matter slogans. Underneath the peace-and-love vibe is an undercurrent of anxiety that this won’t end well and that Black people might get the blame. 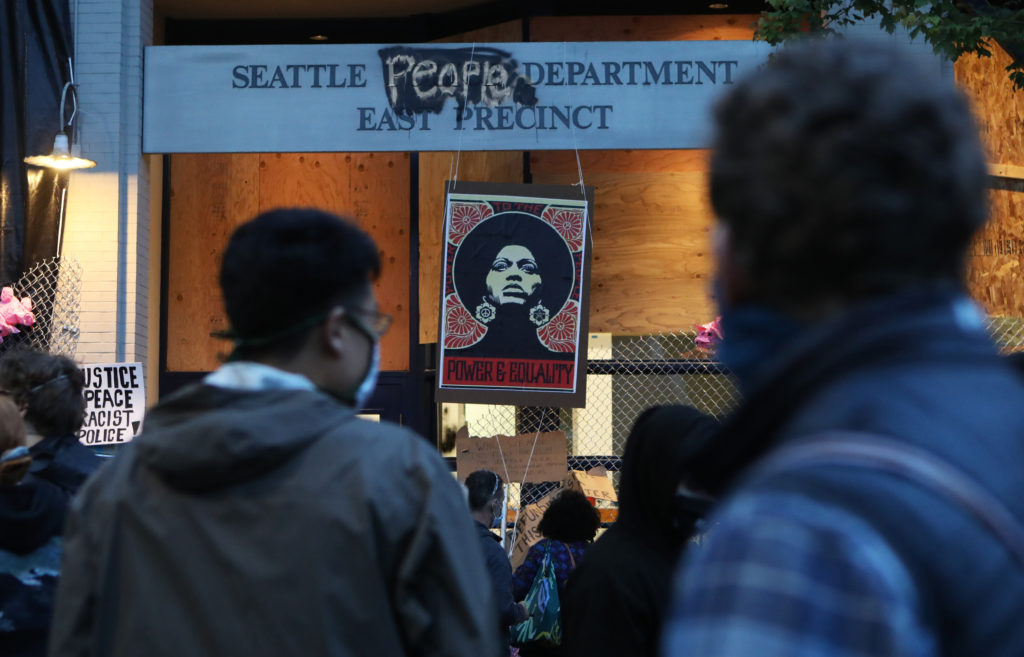 People gather near the vacated Seattle Police Department’s East Precinct in the Capitol Hill Organized Protest zone of Seattle. The open-air protest camp is more than a week old. Makeshift clinics now stand on the streets where young protesters were injured by flash-bang grenades. CREDIT: Jim Urquhart for NPR

“I don’t want it to divert from the main topic for us: We want justice,” said Sitai Brown, a Black protester. She said she’s not sure yet what to make of the occupied zone, though she said it has been refreshing to see non-Black protesters taking action for police reform. She wondered if newly minted white allies have the stamina for an open-ended fight against systemic racism.

“It’s a long game, and I hope that everybody sticks together and goes that distance,” Brown said. “Or else all of this would have been for nothing.”

The open-air protest camp is a week old. In that time, protesters have established a food co-op, a community garden, medical stations, a speaker’s stage, movie nights, book exchanges and round-the-clock security patrols. They see their camp as a prototype for a self-reliant, safe enclave that doesn’t need police.

Black activists say there must be follow-through to make sure their communities remain the priority in a majority-white protest movement whose camp has taken on the feel of a neighborhood block party that’s periodically interrupted by chants of “Black Lives Matter!”

“We’ve been in the back for so long. And if we can’t get pushed up, then there’s no reason for all this. No reason,” said Kim Mustafa, a Black woman who owns a head-wrap business in Seattle. “It’s not enough to just show up. You got to really make sure that the resources are going to be for the Black community.”

The city hasn’t dispatched officers to retake the East Precinct; only a few have visited the building since it was vacated. Instead, officials are following a wait-’em-out approach, perhaps betting that infighting and the loose coordination of a leaderless movement will ensure its eventual demise. After all, the protesters don’t even agree on what to call their occupied space; there was a strong backlash to early “autonomous” declarations.

On Tuesday and early Wednesday, city workers removed the protesters’ makeshift barriers and replaced them with concrete blocks topped with plywood. To the city, the new barriers open access for local traffic, as well as sanitation trucks and emergency workers. Irate activists called it an irresponsible move that shrinks their protest space and endangers lives by creating what one protester called “a drive-by shooting lane.” 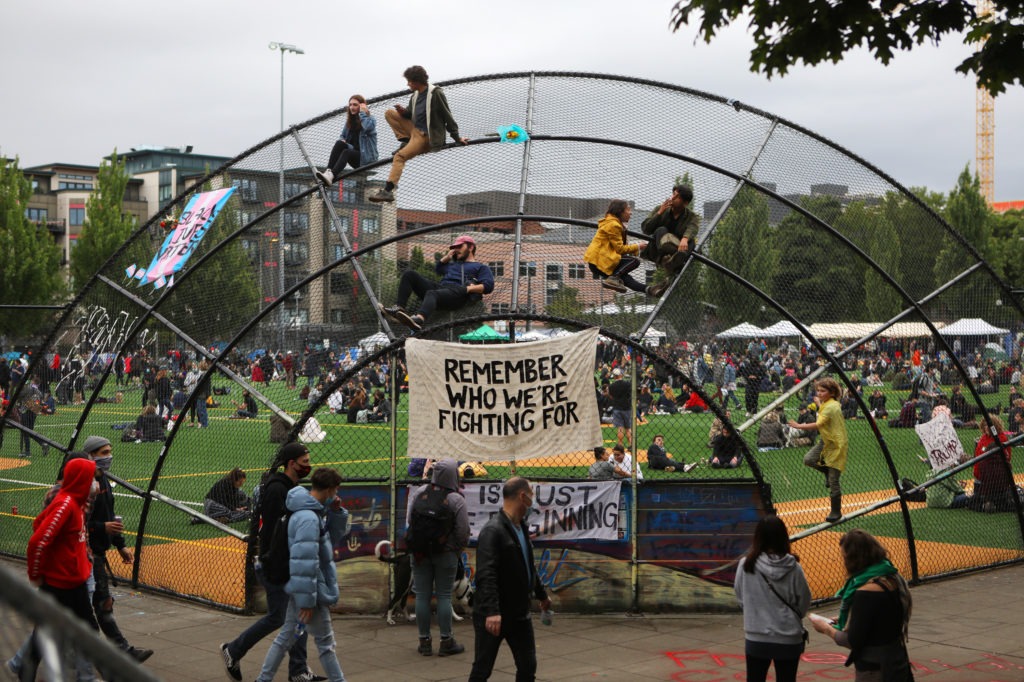 Protesters have established a food co-op, a community garden, medical stations, a speaker’s stage, movie nights, book exchanges and round-the-clock security patrols. They see their camp as a prototype for a self-reliant, safe enclave that doesn’t need police. CREDIT: Jim Urquhart for NPR

Black activists in the zone said they’ll honor the new route during the day but not overnight, when the site is more vulnerable. They vowed to remove the barriers themselves.

“A forklift is on the way!” organizer Jaiden Grayson announced, to loud cheers from protesters.

Activists said it’s too early to relinquish the space. Only a few demands have been met — a ban on police chokeholds, for example — and talks are still going on for the bigger asks, namely slashing the Seattle Police Department’s budget and redirecting funds to health and social services.

Nobody inside the protest zone thinks a police return would end peacefully. If cops show up, protesters say, they plan to block the precinct with their bodies, with white activists pledging to stand up front as a symbolic shield for Black and brown comrades. Small teams of armed anti-fascists are also present — self-proclaimed community defense forces that say they’re ready to fight if needed but that de-escalation is preferred.

“There is no cop-free zone in the city of Seattle,” Police Chief Carmen Best said in an interview with Fox News. “I think that the picture has been painted in many areas that shows the city is under siege. That is not the case.”

Over the past week, several Republican and libertarian visitors have streamed into the zone, along with far-right militia and anti-government types. Right-of-center visitors who come in good faith for dialogue, protesters say, will find no shortage of people willing to engage. But if they’re perceived as agitators, the visitors are promptly surrounded by protesters and herded out.

“A lot of the people who are trying to provoke keep repeating, ‘It’s freedom of speech.’ Which is true, we all have that freedom,” said Brynne Alexander, a young white protester. “At the same time, there’s an inherent fear from the violence that is occurring from groups like the Proud Boys coming in. Nobody wants that.”

Several conservative media figures have livestreamed unimpeded from the zone. Their feeds show peaceful scenes that contradict right-wing media portrayals of a lawless den of communists or, in the words of President Trump, “domestic terrorists.” Last week, Fox News was forced to admit it had doctored photos in a way that portrayed the protest zone as dangerous and aflame. 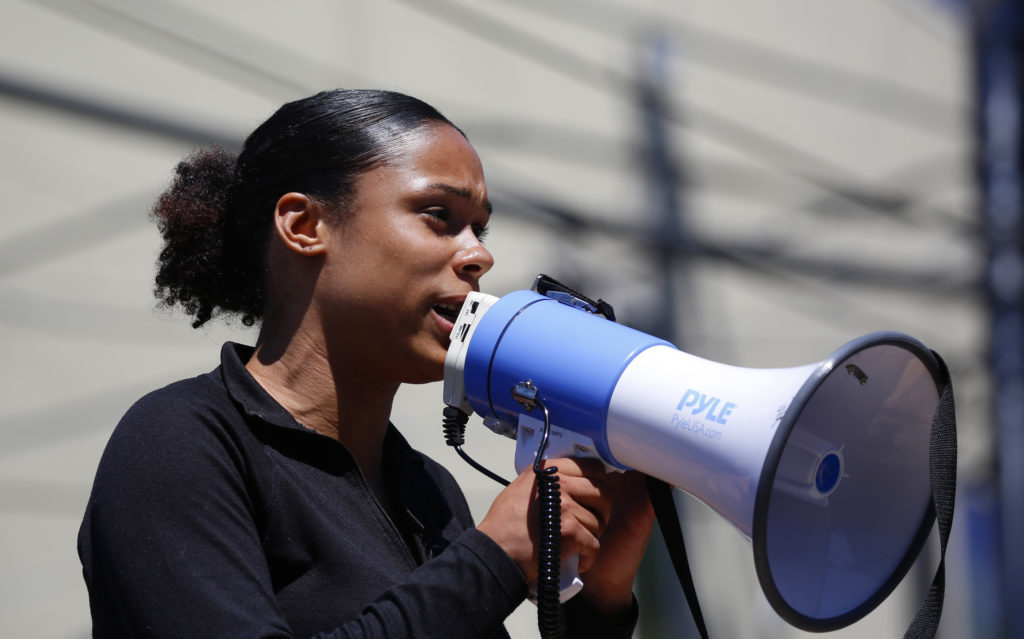 Activist Jaiden Grayson talks about her opposition to new concrete barricades that were installed by the city. CREDIT: Jim Urquhart for NPR

Conservative news channels dwell on claims — which Seattle police have walked back — that protesters are extorting money from local businesses in the occupied zone. Missing are voices like Salvador Sahagun’s. He manages a Mexican restaurant on the edge of the zone and said the uprising is both a moral imperative and a financial godsend.

“Black Lives Matter really saved our business,” said Sahagun, who voted for Trump in 2016 and said he might do so again in November. “We were really struggling with the corona recession.”

Sean, a white law enforcement officer who declined to give his full name because he doesn’t have authorization to speak, said he felt “duped” by the alarmist coverage of right-wing outlets like Breitbart. He said that doesn’t mean he buys into “white guilt” narratives, but that he appreciates the importance of seeing the protests through his own eyes, without the partisan filter.

“We can walk away, shake hands, and leave, respecting each other but maybe not agreeing. And maybe agreeing a little more,” Sean said. “Me being here is just moving the marker.”

Ixtli White Hawk is an indigenous woman who’s been spending time at the camp, organizing across communities whose pain she sees as linked, “stolen people on stolen land.” The police station is “just a building.” The real heart of the occupied zone, she said, is the intense dialogue going on among people who often lack the opportunity — or perhaps the curiosity — to geat to know one another.

“I see how many who don’t have the same experiences as we do, and they are being educated,” she said. “It’s planting a seed.”

But how will this experiment end?