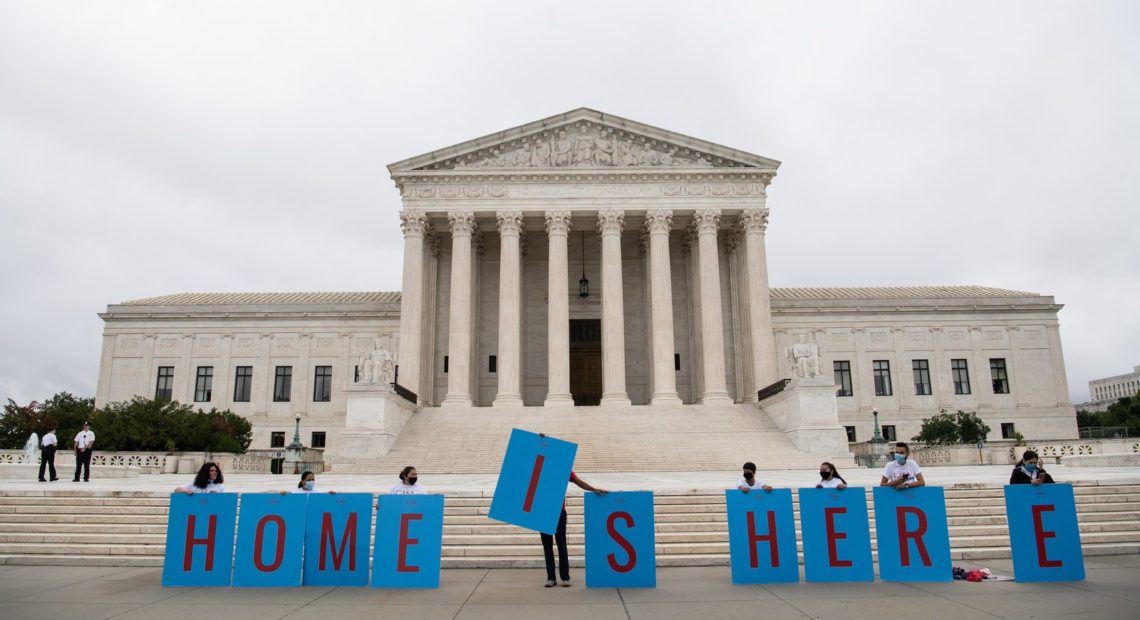 A narrowly divided U.S. Supreme Court extended a life-support line to some 650,000 so-called DREAMers on Thursday, allowing them to remain safe from deportation for now, while the Trump administration jumps through the administrative hoops that the court said are required before ending the program.

The vote was 5-4 with Chief Justice John Roberts casting the decisive fifth vote that sought to bridge the liberal and conservative wings of the court. 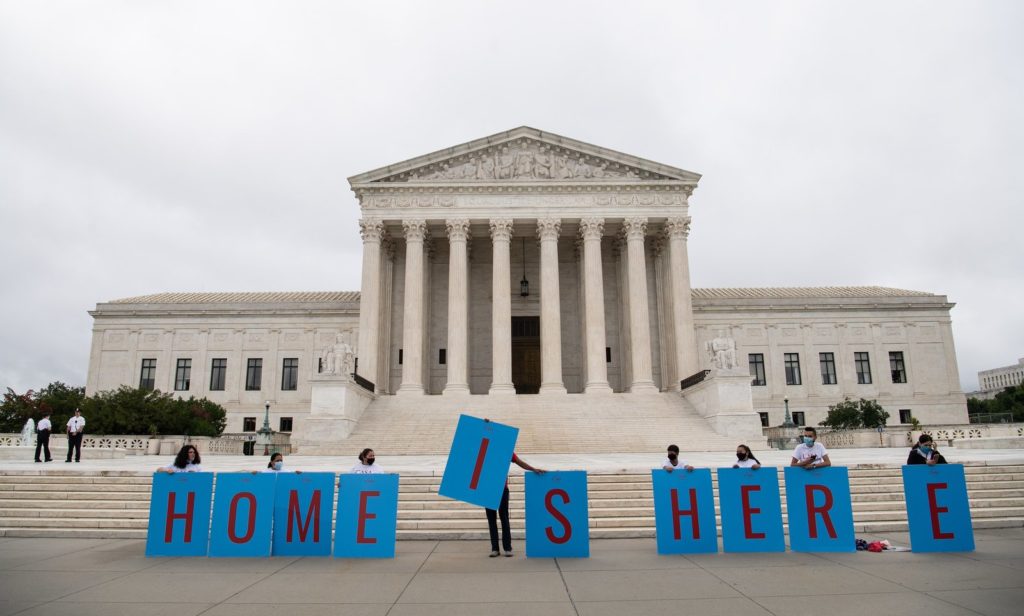 Activists hold a banner in front of the Supreme Court in Washington, D.C., on Thursday as the court rejected the Trump administration’s move to rescind the Deferred Action for Childhood Arrivals program. CREDIT: Nicholas Kamm/AFP via Getty Images

Roberts and the court’s four liberal justices said the Department of Homeland Security’s decision to rescind the Deferred Action for Childhood Arrivals program, or DACA, was arbitrary and capricious under the Administrative Procedure Act. (Read the decision here.)

In his opinion, Roberts wrote: “The appropriate recourse is therefore to remand to DHS so that it may reconsider the problem anew.”

President Trump dismissed the ruling as “politically charged,” turning it into a rallying cry for the 2020 election and the opportunity to appoint more conservative justices. The DACA decision follows another major ruling earlier in the week that granted employment protections for LGBTQ people.

Begun in 2012, the DACA program gave temporary protection from deportation to qualified individuals brought to the U.S. illegally as children. Under the program, the DREAMers were allowed to work legally and apply for college loans if they met certain requirements and passed a background check.

President Trump sought to end the program shortly after he took office, maintaining that it was illegal and unconstitutional from the start.

But he was blocked by the lower courts and appealed to the Supreme Court, where Thursday the justices divided over both substance and timing.

The muddled state of play likely prevents the administration from enacting any plans to begin deportations immediately, but there is little doubt that should Trump be reelected, the second-term president almost certainly would seek to end the program.

Justice Clarence Thomas, in his dissent, wrote: “Today’s decision must be recognized for what it is: an effort to avoid a politically controversial but legally correct decision.”

The court’s decision presents a particularly delicate political problem for congressional Republicans just months before the national election in November.

DACA has been an enormously popular program, with public opinion polls showing widespread support for it among Democrats, independents and Republicans.

DACA recipients have gotten advanced degrees; they have started businesses; they have bought houses and had children who are U.S. citizens; and 90% have jobs. Indeed, 29,000 are health care professionals, working on the front lines of the COVID-19 response.

So popular has the DACA program been that the Senate Republican leadership not once, but twice, worked closely with Democrats to work out a deal to protect the Dreamers, only to have Trump renege at the last moment.

What Trump will do before the November election is anyone’s guess. The heart of his political base is opposed to immigration in just about every form. But this is no ordinary time.

Amid pandemic and racial crisis, the court’s ruling is likely to focus on yet another issue where the president is at odds with public sentiment, while at the same time putting Republican officeholders between the rock of their president’s views and the hard place of their own reelection bids.